Background: Yinqiao Powder (YQP) is administered in Traditional Chinese Medicine (TCM) for febrile infectious diseases and has been demonstrated to fight the prevalence of influenza.

Objective: The present study aimed to identify the optimal decoction time of YQP on inhibit influenza A virus FM1 and investigate the molecular mechanisms of different decocting time YQP.

Results: All YQP intervention groups induced a reduction in the viral load and pulmonary index on the third and last days of infection, especially in 3 minutes YQP H/M/L groups and 6 minutes High-dose group. Meanwhile, YQP intervention groups led to significant decrease in TLR3/4, MyD88, TRAF-6, TRAM and TRIF mRNA levels and TLR3/4 proteins, in particular with 3 and 6 minutes YQP groups.

Influenza virus is a serious global health threat because of its significant mortality in humans, one of which is influenza a virus. It is an important pathogen of humans responsible for periodic pandemics and annual seasonal epidemics [1]. The first pandemic influenza a (H1N1) of the 21st century occurred unexpectedly in April 2009, which caused 18,449 laboratoryconfirmed deaths worldwide [2]. Due to the good adaptability and variation of influenza A virus, and the frequent emergence of drug resistant strains, no vaccine is available and the use of antiviral drugs is also complicated. In order to better cope with influenza virus, neuraminidase inhibitors such as Oseltamivir (Tamiflu) are promptly delivered to affected countries, where they play important roles in controlling the prevalence.However, when a pandemic virus occurs is uncertain, so large antiviral stockpiles may lose effectiveness, thus resulting in massive economic burden. Traditional Chinese medicine (TCM), which has been commonly used in China for thousands of years, has long records of treating influenza virus and is beginning to play a more critical role in this field [3,4].

YQP originated from Febrile Disease Differentiation, a classic works of TCM, which was written by Jutong Wu in Qing dynasty. As a famous multi-herb prescription in China, YQP is comprised of Flos Lonicerae Japonicae, Fructus Forsythiae, Radix Platycodonis, Radix Et Rhizoma Glycyrrhizae, Spica Schizonepetae, Semen Sojae Praeparatum, Fructus Arctii, Lophatherum Gracile, Mint and Rhizoma Phragmitis. Currently, clinical reports about YQP are increasing. It has been widely used in febrile infectious diseases and prevalence of influenza [5,6]. In the annotations, Jutong Wu wrote “as soon as the aroma comes out, start taking herbal, don’t long time decoction”. The key to get curative effect is decocting time [7]. But there is no quantitative standard until now, how long is aroma out and the exactly decocting time? Thus, this study aimed to determine the optimal decoction time of YQP on fight the prevalence of influenza.

Influenza A virus FM1 was provided by the National Institute for Viral Disease Control and Prevention (China). It was propagated in the allantoic cavity of embryonated eggs. The murine macrophage Ana-1 was obtained from the Cell Bank of the Chinese Academy of Sciences (Shanghai, China). Ana-1 cells were maintained in RPIM-1640 (Gibco, USA) medium with 10% heat-inactivated fetal bovine serum (Hangzhou Sijiqing, China). The cells were kept in an incubator containing 5% CO2 at 37°C.

YQP, consisting of ten herbs, was provided by the TCM pharmacy of the Fourth Hospital of Hebei Medical University. All medicinal plants were pulverized to powder using a mechanical blender according to the original proportion. 50 g, 100 g, and 200 g of powder were prepared and boiled respectively for 3 mins, 6 mins and 12 mins with 200 ml of distilled water.

Fifty male rats were divided into ten groups using a random number table with 5 rats in each group. YQP-treated groups (3 min YQP H/M/L, 6 min YQP H/M/L, and 12 min YQP H/M/L groups) received gavage by twice every day (each 2 ml) for 5 days according to clinical equivalent dose of 10 times. Normal control group received the same volume of normal saline. Blood was obtained from the abdominal aorta at 1h after the last intragastric administration, stored at 4°C for 1h, and centrifuged at 3000 r/min for 15 min. The serum was sterilized and inactivated at 56°C for 30 min, followed by filtration through a 0.2 μm mesh, and stored at -20°C.

Ana-1 cells (1 × 105 cells/ml) were cultured in 24-well plastic plates for 24 h and inoculated with 0.5 ml per well of influenza a virus FM1, except for normal control group. After 1 h for virus absorption, the solution was removed and replaced with 1 ml of medium containing different doses and decoction times of YQP serum. After incubation at 37°C for 24 h, the solution was removed and the cells were collected for using subsequent tests.

Viral load of lung tissues and expression of six genes were observed by a quantitative real-time PCR assay. The GAPDH was used as an endogenous control. All primer sequences used in this study were list in Table 1. Total RNA was extracted from the lung tissues and Ana-1 cells, and subsequently reverse transcribed to cDNA. qRT-PCR was performed on an ABI 7500 Real-Time PCR System (Applied Biosystems Life Technologies, USA). The PCR conditions were as follows: 10 min at 95°C, followed by 40 cycles of 5s at 95°C, and 34 s at 60°C. Gene expression levels were calculated using the 2ΔΔCt method.

TLR3/4 proteins were observed by western blot. Total extracted protein lysates from Ana-1 cells were prepared by standard procedures, and protein concentration was determined by BCA protein assay kit (Beyotime, Shanghai, China). 50 μg of protein per lane was separated by 10-12% SDS-PAGE, and transferred onto PVDF membranes. The membrane was incubated with the TLR3, TLR 4 or β-actin antibody (Santa Cruz Biotechnology, USA), and detected by the Odyssey twocolor infrared imaging system.

Viral load of lung tissues were observed by Real-time PCR. The results showed that YQP could reduce viral load in all treatment groups on the third and last day after infection (P<0.05). There was no significantly difference compared with tamiflu group. In the YQP-treated groups, compared with 12 min the same dose group, every dosage of 3 min and 6 min groups had reduced on the last day, especially in 3 min Highdose group (72.66%; 537111.33 ± 51527.89). Protective effect was found in all YQP-treated groups, and the degrees of protection were different depending on the decoction time (Tables 3A and 3B).

Table 3A. Effects of YQP-treated groups on viral load (the third day).

Table 3B. Effects of YQP-treated groups on viral load (the last day).

Ana-1 cells were successfully infected with influenza A virus FM1 and incubated in medium with YQP serum containing various decoction times and doses for 24 h. It was shown that YQP serum decreased the expression of TLR4/MyD88 dependent and non-dependent pathway (Tables 4A and 4B). Compared with blank control group, the expression of TLR4/ MyD88/TRAF-6 and TLR3/TRAM/TRIF in model control group was significantly increased (P<0.05). YQP intervention groups reduced the expression of TLR4/MyD88/TRAF-6 and TLR3/TRAM/TRIF, especially in 3 min groups and 6min High-dose group (P<0.05). Thus, we further assessed the protein levels of TLR3/4 by western blot. The data showed that TLR3 protein level in 6min Middle-dose group was significantly down-regulated (P<0.05, 0.232 ± 0.059). Meanwhile, compared with model control group, TLR4 protein level was significantly down-regulated in 3 min and 6 min groups (P<0.05) (Table 5 and Figure 1). In the YQP intervention groups, compared with 12 min the same dose group, 3 min High-dose group and 6 min YQP H/M groups significantly decreased the protein expression of TLR4 (0.276 ± 0.021, 0.250 ± 0.019, and 0.269 ± 0.017, respectively).

Table 4A. Effects of YQP serum on TLR4/MyD88 dependent pathway.

Table 4B. Effects of YQP serum on TLR4/MyD88 non-dependent pathway. 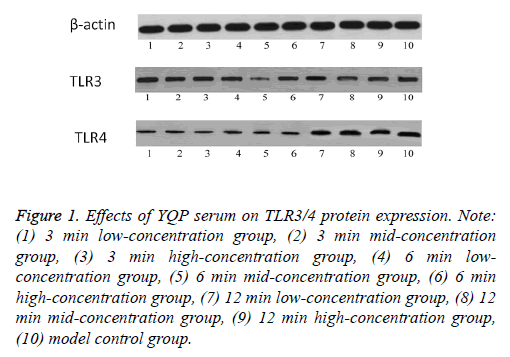 Influenza virus, one of the major pandemic diseases around the world, is a serious public health problem. At present, only M2 proton channel blockers and neuraminidase inhibitors (amantadine and oseltamivir) are used in clinic to against the virus. It brought a massive economic burden. Furthermore, evidence shows that influenza virus is becoming resistant to these drugs [8-10]. TCM, is safe, effective, and low cost, has been commonly used to prevention and treatment of various diseases for thousands of years. YQP, a traditional Chinese medicine applied to anemopyretic cold, has been found to possess potent action against influenza based on principles of evidence-based medicine [11]. Beijing Chao-Yang Hospital investigated the efficacy of YQP in the treatment of H1N1 influenza infection. 410 patients with mild symptoms sought to examine the fever-reducing action of YQP. The results showed that patients treated with YQP had a fever for 16 h, and with oseltamivir had a fever for 20 h. Thus, YQP was able to effectively shorter the duration of fever in patients with influenza infection [12]. But this study did not clarify the specific decoction time of YQP.

Our results also indicated that the inhibitory activity of YQP against influenza A virus FM1 in vivo and in vitro. Different YQP-treated groups displayed a protective effect on FM1 mice. The 6 min High-dose group and 3 min each dose groups significantly reduced the pulmonary index and inhibition rate on the third day after infection. On the last day, inhibition rate of 3 min High-dose group was 30.34%, compared with 32.92% in tamiflu group, had equivalent efficacy. According to our results, YQP could reduce viral load of lung tissue in all treatment groups and no significantly difference compared with tamiflu group. Compared with 12 min the same dose group, every dosage of 3min and 6min groups had obviously reduced. The degrees of anti-influenza virus were different depending on the decoction time.

Influenza A virus is a single-stranded RNA virus that causes severe respiratory tract infection, especially for elderly individuals and immunocompromised patients [13,14]. Tolllike receptor (TLR) plays a critical role in the innate immune system. TLR4 is activated during influenza A virus infection, and is a key contributor to exacerbation of disease. Both TLR4/ MyD88 dependent pathway (TLR4/MyD88/TRAF-6) and MyD88 independent pathway (TLR3/TRAM/TRIF) may play important roles in inflammation and disease caused by virus infection [15-18]. Kegan Liyan oral liquid (KGLY), a Chinese prescription modified from classic formulas YQP and Shen Jie San, may be a potential therapeutic agent for acute lung injury due to suppression of oxidative stress and inflammatory response, inhibition of TLR4-mediated NF-κB activation, and down-regulation of MMP9 expression [19]. Furthermore, it was reported that Yinhuapinggan granule, a Chinese medicine based on Ma Huang Tang, has antiviral effects in IFV-infected mice, which is associated with the inhibition of the TLR4- MyD88-TRAF6 signal pathway. The results cited thus far indicate that TCM has a very well antiviral effect [20]. These findings suggest that YQP serum intervention groups decreased the expression of TLR4/MyD88/TRAF-6 and TLR3/ TRAM/TRIF pathway, especially in 3min groups and 6 min High-dose group.

This work was supported by grants from the National Natural Science Foundation of China (no.81202679)