The novel mutation of CYP21A2 gene and congenital adrenal hyperplasia: A case report

CYP21A2 mutation is the major cause of Congenital Adrenal Hyperplasia (CAH) resulted from the defect in 21-hydroxylase. In this study, we reported a patient of CAH with an unusual mutation of CYP21A2 gene. This patient was a six-year-old girl admitted to Huai’an First People’s Hospital for surgery because of malformation of external genitalia. DNA sequence analysis of CYP21A2 revealed the compound heterozygous mutations (g.6119T>A and g.6699delA) in this patient and her elder sister. Interestingly, the g.6119T>A mutation is associated with a Simple Virilizing (SV) phenotype of CAH, and the g.6699delA is a rare mutation that has not been reported so far. This case report of the patient with an unusual SV CAH identified a previously unreported mutation of the CYP21A2 gene, thus enlarging the spectrum of known mutations related with CAH. DNA sequencing of the CYP21A2 to identify rare mutations should be used for the genetic diagnosis and genetic counselling of CAH.

Congenital Adrenal Hyperplasia (CAH) is an autosomal recessive disorder mainly caused by the 21-Hydroxylase Deficiency (21-OHD) [1,2]. The impairment of 21-hydroxylase blocks the synthesis of cortisol from cholesterol and promotes the androgen biosynthesis, which leads to chronic secretion of Adrenocorticotropic Hormone (ACTH) by activating negative feedback control of hypothalamic-pituitary-adrenal axis and subsequent the adrenal hyperplasia (Figure 1) [3,4]. CAH is divided into Salt-Wasting form (SW), Simple Virilizing form (SV) and Non-Classical form (NC) based on the severity of 21- hydroxylase deficiency [2,5,6]. 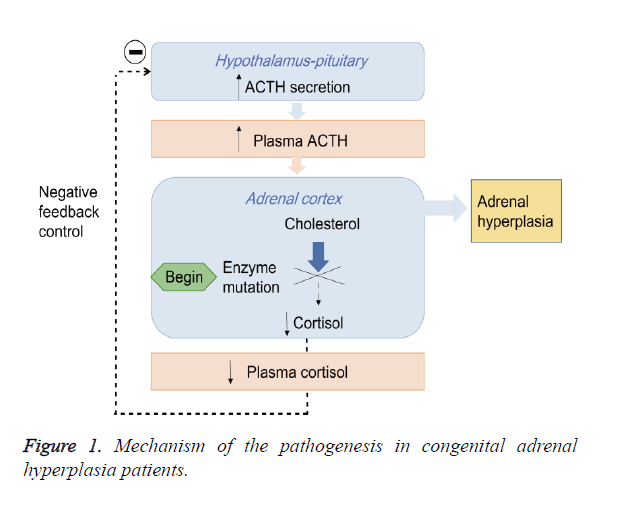 Figure 1. Mechanism of the pathogenesis in congenital adrenal hyperplasia patients.

The 21-hydroxylase (Clinical profile and inheritance pattern of CYP21A2 gene mutations in patients with classical congenital adrenal hyperplasia from 10 families CYP21A2active gene, (OMIM #201910), is located on chromosome 6p21.3, which is adjacent to a highly homologous pseudogene (CYP21A1P). The homology in exon and intron between CYP21A2 and CYP21A1P is up to 98% and 95% respectively, resulting in either CYP21A2 deletion or the transfer of deleterious CYP21A1P sequences to CYP21A2 after recombination or gene conservation [4,7-9].

More than 90% of patients with CAH have CYP21A2 mutations including conversions to the CYP21A1P pseudogene or large deletions [2]. High variability of CYP21A2 locus, as well as high sequence homology between CYP21A2 and CYP21A1P, is prone a incidence of this region to unequal crossing-over or gene conversion events [10]. Some pseudogene-derived mutations together with more complex gene rearrangement are common etiology of CAH [11]. More than 250 mutations have been found in CYP21A2 gene (http://www.hgmd.org). Nine common pseudogene-derived mutations (such as c.293-13A>G, c.293-13C>G, p.Pro31Leu, p.Ile173Asn, exon 6 mutation cluster) comprise 95% of the alleles [12,13].

In this study, we present the gene mutation of a SV lineage via gene sequencing. NG_007941.2:g.6699delA is a novel mutation that has never been reported.

The patient was a six-year-old girl admitted to the hospital for surgery because of malformation of external genitalia. On admission, the patient with 46, XX had hypertrophic clitoris (long: 4.5 cm; diameter: about 2.5 cm), ambiguous labium minor and unclear orificium vaginae. Physical examination revealed no significant abnormality. Routine and biochemical analysis of blood were both normal. Baseline serum hormonal analysis revealed that the cortisol, ACTH and T level was 251.06 nmol/L, 179 pg/ml, 4.33 nmol/L respectively. But after treatment the above three level all reduced (cortisol: 53.62 nmol/L, ACTH: 10.0 pg/ml, T: 2.31 nmol/L). B ultrasonography revealed that the thickness of the right supra-renal (adrenal) gland was about 0.6-0.7 cm and the uterus was hypoplastic. CT showed that the bilateral supra-renal (adrenal) gland was all plump, suggesting that the adrenal may be a hyperplasia. Clitoroplasty was done successfully (Figure 2). 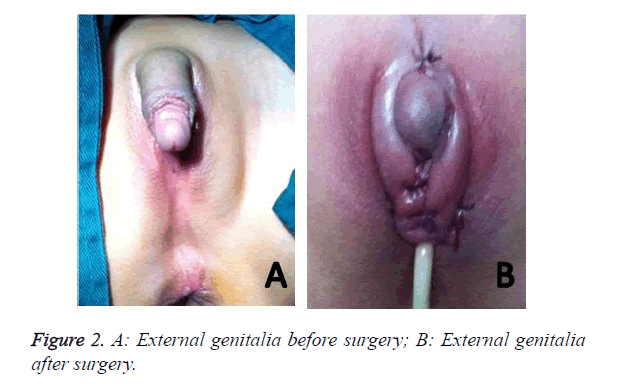 The parents of the patient were not first cousin and no one was the patient with CAH in the family members of her parents. Her elder sister was a patient of 21-OHD, who had been treated with oral prednisone and clitoroplasty since four years old. However, her little brother had normal penis and testis under normal development.

We conducted genomic analysis of the proband and her parents using DNA extracted from peripheral venous blood samples. Polymerase Chain Reaction (PCR) amplification was done for analysing mutations in CYP21A2 gene. Specific primers for amplifying 10 exons and the boundary of CYP21A2 sequence (GenBank accession number: M28548) were shown in Table 1. Amplification was done using 2 mM MgCl2, 200 mM dNTP, 0.2 mM each primer, 200 ng genomic DNA and 1 U Taq DNA polymerase (Takara, Dalian, China) in a 25 μl volume mixture. The PCR amplification conditions were: denaturation at 95°C for 5 min, followed by 30 cycles of denaturation at 95°C for 30 s, annealing at 64°C for 30 s, extension at 72°C for 150 s, and a final extension at 72°C for 10 min. PCR products were then electrophoresed in 1.5% agarose, purified by QIAquick Gel Extraction Kit (Qiagen, Hilde, Germany) and sequenced via the ABI3130XL sequencer (Applied BioSystems).

Table 1. Primers for amplifying 10 exons and the boundary sequences of CYP21A2.

The obtained sequences of each sample were compared with wild type CYP21A2 sequence using online BLAST (http://blast.ncbi.nlm.nih.gov/Blast.cgi). The type and site of mutations were described according to nomenclature, considering nucleotide A of the initiation codon ATG as +1. Then the mutations detected were looked up in public databases such as the Human Gene Mutation Database (http://www.hgmd.cf.ac.uk). The novel deletion mutations were analysed by BioEdit software (version 7.0.9.0, Tom Hall, Ibis Biosciences, Carlsbad, CA).

Congenital Adrenal Hyperplasia (CAH) owing to 21- hydroxylase deficiency is mainly caused by mutations in the CYP21A2 gene [2,14]. As there are relevance between the 21- hydroxylase activity caused by the mutation of CYP21A2 and severity of the clinic physical signs, genotyping CYP21A2 mutations has been proven to be a valuable manner for diagnosis and predicting phenotype in CAH [4,15]. The most severe SW type is caused by the mutations such as R356W and Q318X, which result in the change of protein structure and the complete loss of the enzyme activity; V281L and P30L mutations are common in the NC type and result in a reduction in 21-hydroxylase activity to 20%-50% [1,2,4,14-18].

In the present research, we identified compound heterozygous mutations (g.6119T>A and g.6699delA) in a patient with SV CAH. g.6119T>A mutation, also referred as I172N, occurring in the conserved domain of CYP21A2 and causing a loss of the hydrophobic pocket, leads to a reduction in 21-hydroxylase activity to 2%-11% in vitro studies and is associated with SV type without electrolyte disturbance [3].

The g.6699delA was also detected in this patient with SV CAH. This is a novel mutation that has never been reported before. This patient and her elder sister who also had male external genitalia, pigmentation and hypertrophy of clitoris with aging, were diagnosed with SV phenotype of CAH. We identified heterozygous g.6119T>A and heterozygous g. 6699delA mutation in her mother and father respectively (Figure 3A). By genotyping analysis of her parents, we could confirm that g.6699delA mutation is present in a compound heterozygous state, in trans with the g.6119T>A mutation. Small deletion of nucleotide A at position 6698 leads to the frameshift, and, subsequently, premature stop codon at position 257. The g.6699delA may cause dramatic changes in protein structure, exerting a deleterious impact and enlarging the spectrum of known mutations related with SV CAH (Figure 3B). Functional experiments remain to be done to verify how g.6699delA functions in CAH and what kind of impact g. 6699delA does on enzyme function and structure. 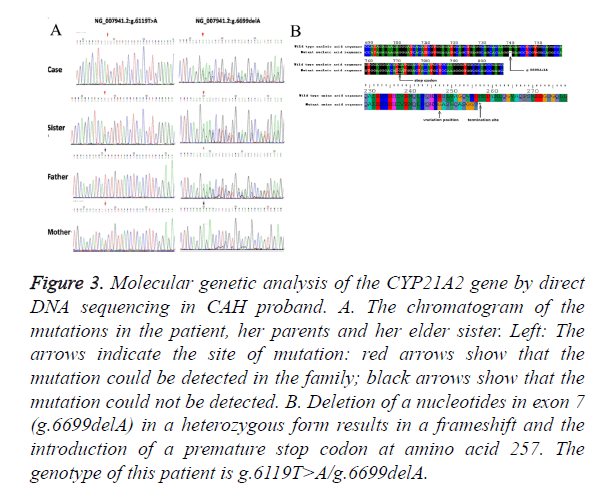 Figure 3. Molecular genetic analysis of the CYP21A2 gene by direct DNA sequencing in CAH proband. A. The chromatogram of the mutations in the patient, her parents and her elder sister. Left: The arrows indicate the site of mutation: red arrows show that the mutation could be detected in the family; black arrows show that the mutation could not be detected. B. Deletion of a nucleotides in exon 7 (g.6699delA) in a heterozygous form results in a frameshift and the introduction of a premature stop codon at amino acid 257. The genotype of this patient is g.6119T>A/g.6699delA.

A recent study found that about 76% of the patients who carried I172N mutation on one allele and a second severe mutation on the other had SV type, while 23% had the SW CAH [4]. Phenotype isn’t always relative accurately to the genotype suggesting diagnosis is more complex for CAH than for many monogenic disorder [19,20]. Thus combination of these two mutations screening may be an efficient mean of diagnosing SV CAH and DNA sequencing of the CYP21A2 to identify rare mutations should be used for the genetic diagnosis of CAH.

In conclusion, g.6699delA is a novel compound heterozygous mutation and enlarges the spectrum of known mutations related with CAH. Combination mutation analysis of the g.6699delA, g.6119T>A and DNA sequencing of the CYP21A2 should be considered as an important possibility for diagnosis and genetic counselling.