Aim: To evaluate the effect of Schisandra chinensis seed extract (used in Chinese medicine) on cisplatininduced cytotoxicity in osteosarcoma cells.

Osteosarcoma is a disease that affects people of all ages all over the world. The disadvantage of using chemotherapeutic combinations is that resistance can develop [1]. Thus there is a need for better chemotherapeutic regimens.

Cisplatin is a platinum co-ordination complex used as a chemotherapeutic agent in ovary, testicular, breast, lung and colon cancer [2]. Intercalation of DNA by cisplatin induces apoptotic cell death. Cisplatin is a better regimen for decreasing chemotherapeutic resistance because it is cytotoxic in osteosarcoma cells [3-5]. Cisplatin has limitations of nephrotoxicity and leucopenia, which are dose limiting. They also limit the therapeutic range of cisplatin. Carboplatin is in 2-4 higher concentration sensitive as cisplatin in osteosarcoma cells. In cisplatin therapy intracellular drug accumulation is an important determinant of CDDP-resistance, which compromises therapeutic efficacy [6].

The genus Schisandra (family Magnoliaceae) consists of 25 species. Schisandra chinensis is also known as Fructus schisandra or five-flavour berry. It is reported to be have antioxidant, anti-stress, hepatoprotective, endocrine, antiinflammatory and anti-mutagenic properties. Schisandra chinensis seed extract contains the active principle schisandrin. This traditional medicine of the Chinese Pharmacopoeia was officially used as a medicine in the USSR decades before. Western scientists have not studied the use of this substance. Recently, the active principle of Schisandra chinensis, schisandrin, has been described as a potential MDR-reversing agent in chemotherapy for osteosarcoma [7,8].

Human osteosarcoma cells (1547) were obtained from ATCC. The cell lines were trypsinised and cultured, and the cells were counted on a haemocytometer. The cell viability was determined using trypan blue. Freshly trypsinized cells were seeded at 4 × 105 cells/cm2 on Eagle’s essential medium (GibcoBRL, Cergy-Pontoise, France) supplemented with 10% Foetal Calf Serum (FCS) (GibcoBRL) and 100 U/ml penicillin. The cultures were maintained in a humidified atmosphere with 5% CO2 at 37°C. The cells were grown up to 90% confluence otherwise reseeded. The same amount of drug vehicle ethanol was added to control group, in which the cells not being treated with drugs.

The MTT assay was used to determine cell proliferation using 3-(4, 5-dimethylthiazol-2-yl)-2, 5-diphenyltetrazolium bromide. In this assay, human osteosarcoma cells were trypsinised after attaining confluence in 96-well plates in triplet for each drug treatment. The cells were treated with ethanol, cisplatin, Schisandra chinensis seed extract and both cisplatin and seed extract.

Human 1547 osteosarcoma cells were seeded in six-well culture plates. After treatment with the drug (40 WM) for 12 hours, an increase in the proportion of floating cells was observed. The extent of apoptosis was measured through secondary apoptosis, quantified by the cell death marker caspase through ELISA (Cell Death Detection ELISA, Roche Diagnostics). The apoptosis assay was carried out with cytosol supernatant of the osteosarcoma cells.

Evaluation of cellular sensitivity to cisplatin

The cellular sensitivity to cisplatin and the effect of the seed extract on the sensitivity were determined by growth inhibition of cells at 50% of the population after 1 hour of drug exposure. CDDP (50 mM HEPES, pH 7.4, 100 mM NaCl, 0.1% CHAPS, 10 mM DTT, 1 mM EDTA and 10% glycerol) was added to each well of a microtiter plate and incubated at 37°C for 10 minutes. Finally, the substrate 1011 Ac-DEVDpNA was added. After 12 hours, the optical density at 405 nm was measured using a microtiter plate reader.

The western blot was used to understand the protein expression level changes with drug treatment. The osteosarcoma cells were washed twice with PBS, collected and lysed in a lysis buffer (100 mM Tris-HCl, pH 6.8, 4% w/v SDS, 1 mM phenylmethylsulfonyluoride, 200 mM b-mercaptoethanol and 1 g/ml aprotinin). The cell lysates were centrifuged at 12,000 g for 30 minutes at 4°C to obtain a cell membrane using the membrane protein extraction kit (Beyotime, Haimen, Jiangsu, China). The protocol recommended for the kit was followed. The protein concentration was determined using Bradford’s method. 10% SDS-PAGE was used to separate the protein by loading 20 μg. The protein was transferred onto PVDF membranes (Bio-Rad Inc., Hercules, CA, USA). Immune complexes were formed by incubating proteins with primary antibodies (1:1000 dilution) overnight at 4°C and then with secondary antibodies (1:10,000 dilution) for 2 hours at 25°C. After extensive washing with TBST, the membranes were processed with the Easy See Western Blot Kit (Trans Gen Biotech, Beijing, China) according to the manufacturer’s protocol. Immunoreactive protein bands were detected using a ChemiDoc XRS+ imaging system (Bio-Rad, Inc.).

The data were expressed as mean+SEM values, and the means of the groups were statistically compared by Analysis of Variance (ANOVA). A P-value less than 0.05 was considered statistically significant. 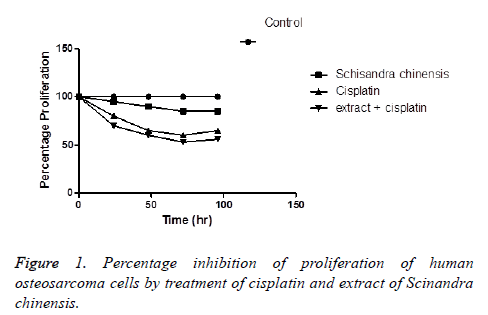 Figure 1. Percentage inhibition of proliferation of human osteosarcoma cells by treatment of cisplatin and extract of Scinandra chinensis.

Effect of seed extract on to cisplatin induced apoptosis

Cisplatin-induced cell death by intercalation with DNA causes inhibition of cell proliferation through apoptosis. Cell fractions were used with ELISA to determine apoptosis by floating cells compared with adherent cells. The cisplatin and seed extract were evaluated for apoptosis after 12 and 24 hours of treatment as shown in Table 1. There were significant increases in the numbers of floating cells after treatment with cisplatin and both seed extract and cisplatin. Moreover, the apoptotic ratio, determined by ELISA, increased significantly over time.

A growth inhibition assay (IC50) was used to determine the cellular sensitivity to cisplatin and both seed extract and cisplatin after 1 hour of treatment. The IC50 values are shown in Table 2. Under our experimental conditions, the HOS 1547/Pt cell line was approximately 2-5 more resistant to CDDP.

In the apoptosis induction mechanism, caspase 3 is activated during the signalling process. It has been reported that cisplatin induces apoptosis through caspase 3 activation in osteosarcoma cells. The activation of caspase 3 was increased significantly in the human osteosarcoma cells treated with cisplatin and seed extract. The reduction of the expression of glycoprotein was more significant with the cisplatin and seed extract treatment compared with cisplatin alone (Figures 2-4). 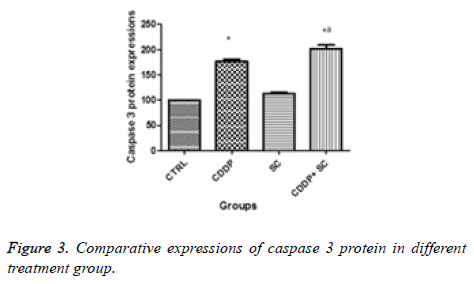 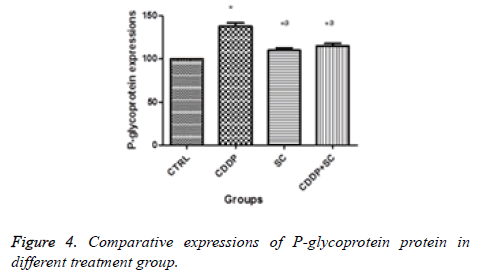 Schisandrin B provides protection from doxorubicin-induced cardio toxicity and increases anticancer activity by acting as a chemosensitiser in S180 sarcoma and 4T1 breast cancer. Deoxyschizandrin shows beneficial anticancer effects through its anti-proliferative activity in human U2OS osteosarcoma cells. Schinandrol, an active constituent of Schisandra parts, ameliorates acetoaminophen-induced hepatotoxicity through its antioxidant effect and activation of the NRF2–ARE signalling pathway, which is involved in xenobiotic detoxification. Schisandrin B is a mixture of diastereoisomengomisin N and γ- schisandrin. Whereas gomisin N inhibited ataxia telangiectasia and Rad-3-related protein kinase in a dose-dependent manner, whereas γ-schisandrin did not [16-18].

Authors declare no conflict of interest.