Background: Deregulation of DKK3 has been reported in various cancers, and its abnormal methylation is closely associated with carcinogenesis. However, the methylation status and function of DKK3 in osteosarcoma have been poorly understood. This study investigated the effects of methylated oligonucleotide-induced methylation of DKK3 promoter on malignant properties of osteosarcoma cells.

Methods: SAOS-2 osteosarcoma cells were transfected with methylated or control oligonucleotides. Differences in the methylation status of the DKK3 promoter, proliferation, cell cycle, apoptosis, and metastasis of SAOS-2 cells were compared among the groups treated with different oligonucleotides.

Results: The Methylated Oligonucleotide (MON) successfully induced the methylation of the complementary CG sequences in the DKK3 promoter. Viable cells in the MON group were significantly more than that of the control groups. Consistently, in the MON group, the rate of S phase of cells was higher, while the rate of cellular apoptosis was lower than that in control groups. Moreover, the MON could also enhance the metastasis capability of SAOS-2 cells.

Osteosarcoma is a primary malignancy of bone that commonly happens in children and adolescents. It is highly aggressive, with the lung of the most common metastatic site [1]. Standardized application of neoadjuvant chemotherapy has increased the possibility of limb salvage, and contributed to the improved 5 y survival rate and life quality of osteosarcoma patients [2]. Despite intensive efforts have been devoted to osteosarcoma during the past decade, many patients still fail to achieve long-term disease free survival. The mechanisms underlying osteosarcoma progression currently are largely unknown. A better understanding of the underlying mechanisms is urgently required for improved treatment of osteosarcoma. Epigenetic modifications, including promoter methylation and chromatin condensation, have been proposed to contribute to osteosarcoma progression.

Dickkopf-related protein 3 (DKK3) is a 38 kDa secreted glycoprotein with an N-terminal signal peptide, which could not only elicit distinct intracellular roles, but also has secretary functions [3]. Aberrant Wnt signaling has been well established in the progression of many malignancies [4]. As one of the Wnt signaling pathway antagonists, DKK3 has been reported to be a potential tumor suppressor in various cancers, and its ectopic expression could suppress aggressive malignant properties, mostly resulting in reduced proliferation and metastasis through the reversion of Epithelial-Mesenchymal Transition (EMT) [5-8]. Lorsy has demonstrated that low DKK3 mRNA expression was significantly associated with reduced Recurrence Free Survival (RFS) of luminal and basal like breast cancer cases, and DKK3 re-expression in human breast cancer cell lines led to suppression of cell growth [9]. Transfection of DKK3 significantly reduced the invasion capacity and cell motility of SAOS-2 osteosarcoma cells, associated with cellular morphology changes consistent with a less invasive phenotype [8]. However, SAOS-2 cells with ectopical expression of Dkk-3 exhibited enhanced resistance to serum starvation and chemotherapy-induced cytotoxicity [8]. Recently, several studies have reported that DKK3 might exert oncogenic function [10,11]. The head and neck, and oral squamous cell carcinoma (HNSCC/OSCC) patients with DKK3 expression showed high metastasis rate and poorer survival, and DKK3 might contribute to the malignant progression in HNSCC/OSCC, through PI3K-Akt signaling other than the canonical Wnt signaling pathway [10,11]. To date, the function of DKK3 remains controversial and need to be clearly elucidated.

Recently, deregulation of DKK3 has been observed in multiple malignancies and influences the progression of carcinogenesis. DKK3 methylation is closely associated with the occurrence, progression, and prognosis of various cancers [12,13]. Xiang revealed that DKK3 methylation was detected in 78% of breast tumor samples, whereas DKK3 was rarely methylated in normal breast and surgical margin tissues, suggesting that DKK3 is methylated specifically in breast cancer [14]. In addition, the abnormal activity of Wnt/β-catenin signaling in hepatocellular carcinoma may be associated with the methylation of Dkk-3 [15]. Epigenetic downregulation of DKK3 also leads to docetaxel resistance in human Non-Small Cell Lung Cancer (NSCLC) [16]. However, the function and status of DKK3 methylation in carcinogenesis of osteosarcoma is rarely known.

Usually, DNA methyltransferases (DNMTs) could be used as a possible strategy to methylate the CpG islands of promoter. However, DNMT overexpression not only induces elevated methylation level of the target gene, but also increases total genome methylation level, which would cause extensive changes in gene expression. Recently, Yao et al. utilized a methylated oligonucleotide complementary to a region encompassing the human Insulin-Like Growth Factor 2 (IGF2) promoter to induce site-specific DNA methylation, which successfully induced hypermethylation of the promoter region and thus inhibition of gene transcription [17]. In addition, Ishii further confirmed the strategy that the methylated oligonucleotide induced methylation of Glutathione S-transferase P1-1 (GSTP1) promoter and suppressed its expression in lung adenocarcinoma cells [18].

Effectene transfection reagents were purchased from QIAGEN China Co., Ltd. (Shanghai, China). Methylation detection kit was purchased from Beijing Tianmo Science and Technology Development Co., Ltd. (Beijing, China), and the CCK-8 kit was purchased from Beyotime Biotechnology (Haimen, China). Primers and methylated oligonucleotides were synthesized and purified by Takara Biotechnology Co., Ltd (Dalian, China), and sequencing was performed by Beijing Genomics Institute. SAOS-2 osteosarcoma cells were cultured in 90% DMEM supplemented with 10% FBS at 37°C in an incubator with an atmosphere of 5% CO2. 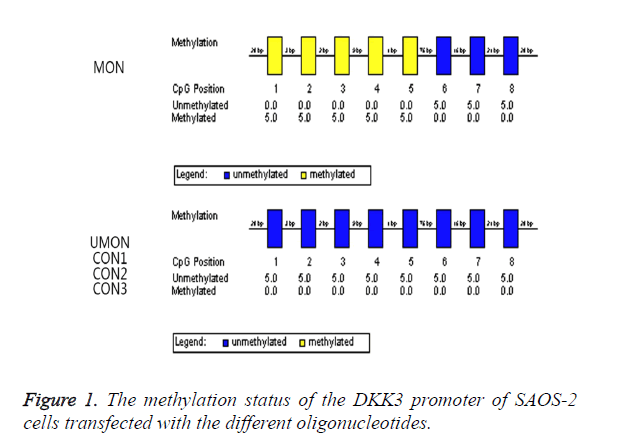 Figure 1. The methylation status of the DKK3 promoter of SAOS-2 cells transfected with the different oligonucleotides.

Table 1. The sequences of the oligonucleotides in the MON, UMON, CON1, CON2, and CON3 groups.

Detection of the methylation status of the DKK3 promoter

Genomic DNA of cells in the MON, UMON, CON1, CON2, and CON3 groups was extracted. Methylation status of the DKK3 promoter was determined by performing bisulfite sequencing PCR. Methylation primers (forward primer, AGTTTAGTTTTTTTTGGTGGATGTG; reverse primer, AAACCCCAACTCACCTAAACTCTAT) were designed using MethPrimer (http://www.urogene.org/cgi-bin/methprimer/methprimer.cgi) [21]. PCR conditions were as follows: initial denaturation at 95°C for 10 min; 35 cycles of denaturation at 95°C for 1 min, annealing at 63°C for 30 s, and extension at 72°C for 30 s; and final extension at 72°C for 10 min. PCR products were cloned by performing TA cloning, and their sequences were analysed using BiQ Analyzer.

The cell proliferation was detected using the CCK-8 assay according to the producer's protocol (Beyotime Biotechnology, Haimen, China). Briefly, cells were seeded in 96-well plates with a density of 5 × 103 cells per well overnight. The cells were treated with different oligonucleotides, and after different periods (0~7 d), the cell proliferation was evaluated by adding CCK-8 solution to each well of the plate. After incubation for 1 h, the absorbance was measured at 450 nm using a Multiskan MK3Microplate Reader (Thermo Scientific, USA). The absorbance was obtained by subtracting the absorbance of the blank control group from that of the experimental groups. The proliferation curves of d 0 to 7 (D0-D7) were plotted using absorbance as the ordinate and time as the abscissa.

Detection of cell cycle and apoptosis

In vitro migration and invasion assay

In vitro migration and invasion assays were performed by placing cells into the upper chamber of a transwell (BD Bioscience) without or with Matrigel, under serum-free conditions. Medium supplemented with 10% FBS was used as a chemo attractant in the lower chamber. Briefly, SAOS-2 osteosarcoma cells were seeded in a six-well plate, and transfected with different oligonucleotides after overnight culture. Twenty-four hours after transfection, the cells were transferred to the transwell. After incubation for 48 h, cells remaining on the upper chamber were removed with a cotton swab, while cells adhering to the lower membrane were stained with 0.1% crystal violet and photographed with an inverted microscope.

Statistical analyses were conducted using SigmaPlot 12.0. One-way ANOVA with the Dunnett’s post-test was used to compare the means of three or more groups. P<0.05 was considered statistically significant at an inspection level (α) of 0.05.

The methylated oligonucleotides induce the methylation of DKK3 promoter

The methylated oligonucleotides promote the proliferation of SAOS-2 cells 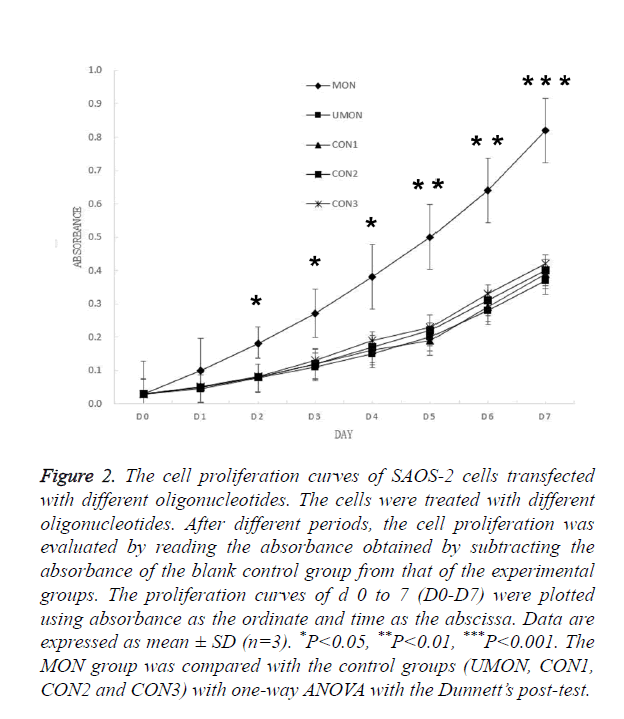 Figure 2. The cell proliferation curves of SAOS-2 cells transfected with different oligonucleotides. The cells were treated with different oligonucleotides. After different periods, the cell proliferation was evaluated by reading the absorbance obtained by subtracting the absorbance of the blank control group from that of the experimental groups. The proliferation curves of d 0 to 7 (D0-D7) were plotted using absorbance as the ordinate and time as the abscissa. Data are expressed as mean ± SD (n=3). *P<0.05, **P<0.01, ***P<0.001. The MON group was compared with the control groups (UMON, CON1, CON2 and CON3) with one-way ANOVA with the Dunnett’s post-test.

To reveal the mechanisms through which the MON promoted the proliferation of SAOS-2 cells, flow cytometry was performed to quantitative the population of apoptotic cells and cell cycle distribution. As shown in Figure 3, differences in the rates of G0/G1 phase, S phase, G2/M phase, Proliferation Index (PI), and apoptosis were not statistically significant among the cells in the control groups (P>0.05). The rates of S phase, G2/M phase, and PI of cells in the MON group were significantly higher than those in the control groups (P<0.05) (Figures 3A and 3B). The MON also strikingly decreased the apoptosis of SAOS-2 cells compared with the control groups (P<0.05) (Figure 3C). 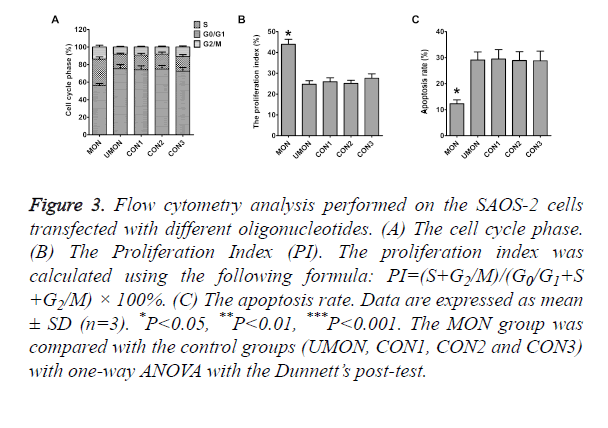 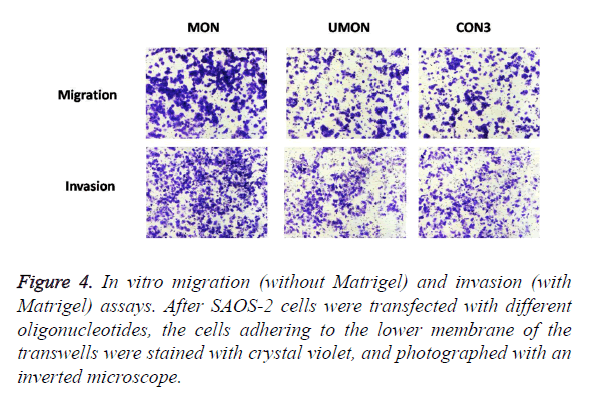 Figure 4. In vitro migration (without Matrigel) and invasion (with Matrigel) assays. After SAOS-2 cells were transfected with different oligonucleotides, the cells adhering to the lower membrane of the transwells were stained with crystal violet, and photographed with an inverted microscope.

Epigenetics involves the study of methylation and acetylation, and mechanisms regulating these processes do not rely on changes in the base sequence of genes. Methylation of gene promoters is the most common and important regulatory mechanism of epigenetics [22]. Methylation or binding of proteins to methylated CpG islands inhibits the binding of transcription factors to gene promoters, decreases gene expression, and regulates gene expression before transcription [23]. Increasing genes are found with hypermethylation inhibition in tumors [24]. Hypermethylation was detected in tumor tissues such as gastrointestinal tumors, respiratory tract neoplasms [25,26]. Abnormal demethylation is closely associated with the development of tumors and is regarded as a hallmark for evaluating prognosis [27,28]. Deregulation of DKK3 has been reported in multiple malignancies, and its abnormal methylation is closely associated with the progression of carcinogenesis [29-34]. However, the methylation status and function of DKK3 in osteosarcoma has not been clarified. Our present study showed that induced methylation of DKK3 promoter promoted the proliferation of SAOS-2 osteosarcoma cells, as reflected by increased rate of S phase and decreased apoptosis, and exacerbated migration and invasion capability. The results indicated that DKK3 promoter methylation could contribute to the malignant transformation of osteosarcoma, and promote the development and progression of osteosarcoma. In the future study, we should further compare the methylation status of the DKK3 promoter in patients of osteosarcoma with healthy people.

In contrast to the traditional members of the DKK family, DKK3 does not only modulate the Wnt/β-catenin pathway, but also has distinct intracellular signaling partners, which are also closely associated with tumorigenesis [7]. A study showed that DKK3 promoted pathogenic stromal remodeling in benign prostatic hyperplasia and prostate cancer via enhancing PI3K/AKT signaling [36]. In the present study, the viable cells in the MON group was significantly higher than that of cells in the control groups, accompanied with increased rate of S phase and decreased apoptosis. Moreover, the MON could also enhance the metastasis capability of osteosarcoma cells. The results indicated that induced methylation of the DKK3 promoter promoted the malignant phenotype, maybe dependent or independent on the modulation of Wnt/β-catenin pathway. Thus, this study simulated the abnormal methylation of the DKK3 promoter occurring in tumor cells and highlighted the contribution of the effect of DKK3 methylation to the mechanisms underlying osteosarcoma progression.