Carbon tetrachloride (CCl4) is commonly used for generating liver [1,2] and kidney injury [3,4] in rat model. CCl4 is metabolized in hepatocytes by the cytochrome P450 to produce free radicals that induce oxidative stress leading to hepatic and renal injury [5]. This induced oxidative stress is a physiological status associated with the unbalance between free radical and antioxidant defenses [1,6].

The induced CCl4 hepatonephrotoxicity also causes increase in blood flow and cytokine accumulation which are characteristic of tissue inflammation [2]. Therefore, protection against CCl4 induced hepatotoxicity is performed through prevention of oxidative damage, or up-regulation of antioxidant genes and down regulation of proinflammatory IL-6 gene which are a possible mechanism of protection [7]. Numerous chemical and natural products were efficiently used in alleviating the toxic effects of CCl4 [8-10].

Moringa oleifera Lamarack (Moringaceae) is known in the developing countries as a vegetable, a medicinal plant, a source of vegetable oil, a forage for livestock, a natural anthelmintic and a boost food security in developing countries [11,12]. The aqueous and alcoholic extract of M. oleifera root-wood reduce the elevated urinary oxalate and lowers the deposition of stone forming constituents of rat kidneys subjected to ethylene glycol treatment [13]. M. oleifera Lam. Also has nutraceutical uses in the treatment of hypercholesterolemia and hyperglycemia [14-16].

It is worthy to mention that M. oleifera is genotoxic at suprasupplementation levels of 3000 mg/kg body weight [14].

This study aimed to test the protecting activity of the methanolic extract of M. oleifera seed against CCl4 induced hepatonephrotoxicity in the male rat.

Carbon tetrachloride and methanol were purchased from Merck Ltd, Coimbatore, Tamil Nadu (India). Silymarin was purchased from a pharmacy in Tabuk, KSA. Virgin olive oil was obtained from a local herbal medicine shop in Tabuk (Saudi Arabia). The seeds of M. oleifera were collected from a farm at Tabouk, identified by a specialized botanist and a specimen was deposited at Biochemistry Department, Faculty of Science, University of Tabouk, Tabouk, Saudi Arabia.

Twenty four rats (Rattus norvegicus) of East Asian origin (weighing 180-200 g) were purchased from Faculty of Pharmacy and all experiments were achieved under approved ethical protocols of the University of Tabuk, Kingdom of Saudi Arabia. The animals were divided 6/cage and kept under observation for two weeks before start of the experiment. The experiment was conducted under controlled condition of lighting (12 h light/12 h dark), temperature (25°C) and humidity (40%). All animals received normal feed and water ad libitum for the 8 weeks. Six rats were chosen randomly as the negative control group and were intraperitonially injected in the 1st and 4th d every week by olive oil (1 ml/kg body weight). The other 18 rats were randomly divided into three groups (G2-G4), and then liver and kidney damage was induced in the 18 rats by injecting the rats in the 1st and 4th day every week by CCl4 (1 ml/kg body weight) [2] by intraperitonial injection with equal amount of olive oil. G2 was the positive CCl4 treated control group. G3 was treated with 200 mg/Kg bw of 20% moringa seed methanolic extract [11] and G4 was treated with 0.05 g/kg b.w. of silymarin (as the recommended drug).

On the last day of the experiment blood was withdrawn from the heart and serum was separated by centrifugation for 15 min at 7000 rpm and 4°C. The animals were rats were anesthetized with diethyl ether, and then sacrificed. The liver and both kidneys were excised immediately and washed with sterile saline solution. One kidney and a piece of liver was washed in saline and fixed in 10% formalin for histopathological section preparations. The other piece of the liver was kept in ice for tissue homogenate preparation.

Preparation of the methanolic extract

Glutathione-s-transferase, catalase, superoxide dismutase, and lipid peroxide were assayed in liver tissue homogenate by Systronics Spectrophotometer, Systronics (India) using Biodiagnostic kit (Egypt), according to the instruction of the manufacturer.

The proinflammatory cytokine IL-6 was estimated in liver tissue homogenate by quantitative ELISA analysis using R&D Systems Inc. (United States) according to the instruction of manufacturer.

Estimation of total protein and bilirubin

Histopathology of liver and kidney

Liver and kidney tissues were rinsed in sterile saline and fixed in 10% buffered neutral formalin solution. After fixation, the liver tissues were processed by embedding in paraffin. The paraffin blocks were sectioned and stained with hematoxylin and eosin (H&E). The sections were examined and photographed using Olympus light microscope (Japan).

Statistical analyses were carried out using SPSS software to determine the mean and standard error as well as t-test, and then reanalysed by one way ANOVA to determine the best group using SAS package software.

Table 3 shows that the interleukin-6 (IL-6) in liver tissue homogenate of CCl4 hepatootoxic male rats was increased in the tissue homogenate of the CCl4 positive control group (G2). Treating the CCl4 administered groups with M. oleifera and silymarin in the third and the fourth group, respectively decreased the IL-6 levels compared to the positive control group. Similar to other results M. oleifera seed methanolic extract was more efficient than silymarin.

Table 5. Effect of M. oleifera methanol extract supplementation for 8 w on kidney function and electrolytes in the serum of CCl4 hepatonephrotoxic male rats.

Table 6 shows that the total protein level was significantly reduced, whereas bilirubin was significantly increased in the second positive CCl4 treated group compared to the negative control group. While treating the heptonephrotoxic groups in G3 and G4 with M. oleifera seed methanolic extract and silymarin, respectively significantly increased the total protein and reduced bilirubin compared to the positive control (G2). Treating the CCl4 induced hepatotoxic rats with M. oleifera seed methanolic extract in G3 was more efficient than treating with silymarin in G4.

Table 7 shows that body weight gain (per day and per week), percentage of body weight gain, food efficiency ratio and percent of food efficiency ratio were decreased as a result of hepatotoxicity induction using CCl4 in the second group compared to the negative control group, whereas these values were increased approaching the normal value as in G1 with the cosupplementation with M. oleifera seed methanolic extract in G3, and silymarin in G4. 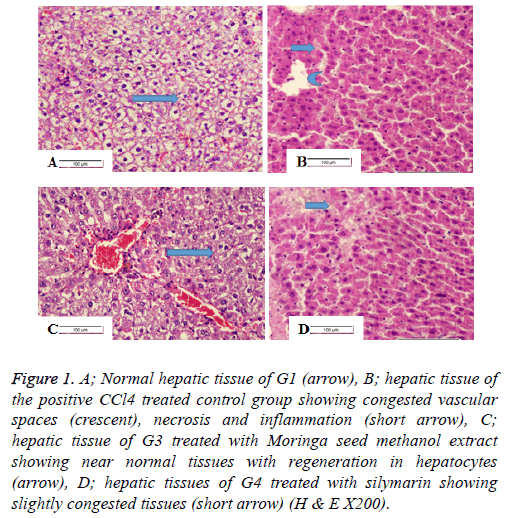 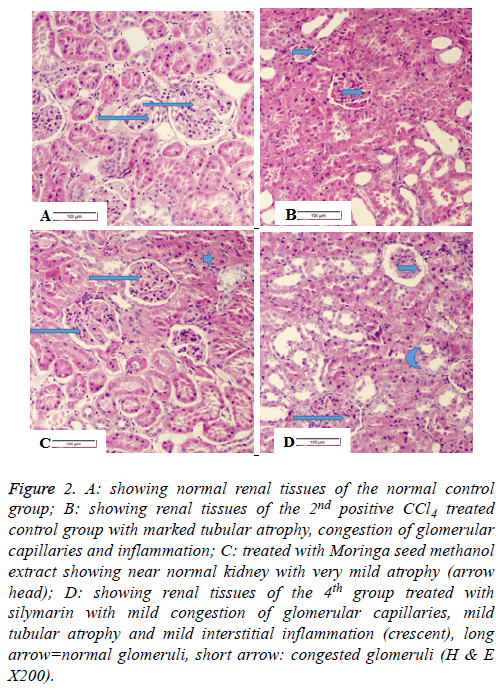 The aim of the present study was to study the hepatonephro protective activity of M. oleifera seed methanol extract against CCl4 toxicity in male rats. Silymarin was used in protecting against CCl4 hepatotoxicity in the fourth group as the recommended drug worldwide to evaluate the protecting activity of M. oleifera seed methanolic extract. The HPLC analysis of the methanolic extract of the tested M. oleifera seed contained a higher content of the antioxidants; oleic acid (which is a monounsaturated omega-9 fatty acid) and ascorbic acid (which is s a major antioxidant and plays an important role in plant growth and development), in addition to the other known phenolic and flavonoid compounds [25].

CCl4 toxicity decreased all antioxidants and increased the oxidative stress as revealed by the increased lipid peroxidation in the positive control group [2,4]. However, M. oleifera seed methanolic extract succeeded in increasing the antioxidant enzyme activity and decreasing the oxidative stress by decreasing lipid peroxidation. Oleic acid and ascorbic acid were the major constituent of the tested sample of M. oleifera seed methanolic extract compared to the other constituents. This protecting activity of M. oleifera against CCl4 toxicity is consistent with previous investigations revealed that the crude extract of M. oleifera is a good scavenger for nitric oxide radicals and has a potential source of natural antioxidant [16,26,27]. In addition, oleic acid reduces blood pressure by increasing fat burning and protects cells from free radical damage [28]. Whereas ascorbic acid (vitamin C) in addition to its immunological benefits it was recently found that it protects against endothelial dysfunction, carcinogenicity, hyperglycemia, cardiac health, degenerative diseases and the blood vessel changes that precede heart disease [29-31].

Similarly, interleukin-6 level was also increased as an indication of inflammatory effect resulted from CCl4 toxicity due to the up regulation of IL-6 gene [2]. The antioxidant activity of M. oleifera seed methanolic extract succeeded in alleviating this inflammatory effect as revealed by the decreased Il-6 levels in the third group. Down regulation of the proinflammatory IL-6 gene is a possible mechanism of protection against CCl4 toxicity [7]. It is also worthy to mention that all studied parameters showed that treating the CCl4 administered rats with M. oleifera seed methanolic extract is much more efficient than silymarin which was used in this study as the recommended drug for treating liver cirrhosis worldwide.

CCl4 toxicity greatly injured both liver and kidney as revealed by the elevated liver enzyme activity and kidney function parameters, and the decreased serum sodium and potassium ions in the positive control group [1-4]. Moreover, CCl4- induced hepatotoxicity profound elevation of reactive oxygen species (ROS) production and oxidative stress, as revealed by the increase of lipid peroxidation level and depleting of the total antioxidant capacity (TAC) in liver [2,8]. Since uric acid and urea resulted from nucleic acid and protein catabolism, respectively, the elevation in uric acid is ascribed to the increase in protein catabolism, whereas the enhanced amino acid deamination for gluconeogenesis may cause elevation in the levels of urea [2].

The M. oleifera seed methanolic extract has an ameliorative effect on liver fibrosis in rats by reducing liver damage and symptoms of liver fibrosis, decreasing the CCl4-induced elevation of serum aminotransferase activities and globulin level, and reducing the elevated hepatic hydroxyproline content and myeloperoxidase activity [17,26].

On the other hand, treating the CCl4 injured liver and kidney with M. oleifera seed methanolic extract and silymarin attenuated these toxic effects and decreased the elevated liver and kidney function parameters approaching the normal levels. This is might be ascribed to the antioxidant activity of M. oleifera seed methanolic extract. In addition, other herbs such as Ginseng essence could ameliorate liver fibrosis via inhibiting the activation of hepatic stellate cells through elevating the activities of antioxidative enzymes and the content of antioxidant [32]. The significant decrease in serum total protein as a result of CC14 toxicity in the second positive control group was due to the reduction in forming hepatic protein [2,33].

The decrease in BWG% and FER as a result of CCl4 toxicity in the second group compared with negative control group is consistent with Fang et al. [34] and Al-Seeni et al. [2]. Similar to other studied parameters, the value of BWG and FER was significantly increased with M. oleifera seed methanolic extract and silymarin in the 3rd and 4th group, respectively due to the antioxidant and alleviating activity of M. oleifera seed methanol extract.

The current study showed that HPLC analysis of the methanolic extract of M. oleifera seeds contains higher percentage of the antioxidants; oleic acid, ascorbic acid, in addition to phenols and flavonoid. These constituents are highly antioxidants and succeeded in protecting-to a higher extent-against the toxic effect of carbon tetrachloride on liver and kidney by alleviating these effects on both biochemical and histopathological levels approaching the negative control condition. It is also worthy to mention that the methanolic extract of M. oleifera seeds was more efficient in protecting both liver and kidney against CCl4 toxicity than silymarin.

The authors declared no conflict of interests

The project was funded by the Deanship of Scientific Research (DSR), University of Tabuk, Tabuk, KSA under grant No. (S-1438-0088). The authors, therefore, acknowledge with thanks DSR technical and financial support.