The mechanical properties of nanohybrid and bulk fill posterior composites

Methods: 108 rectangular specimens were prepared from the following composites: (Estelite Sigma Quick (ESQ), Charisma Smart (CS), 3M Espe Filtek Z 250 (EFZ) and Filtek Restorative (FR)) and subjected to various artificial aging protocols (storage in distilled water for 24 h; thermal cycling, 2 × 3000 cycles 5/55°C). The materials were light-cured for 20 s in a 2 mm × 2 mm × 6 mm teflon mould. The nanoparticles of groups were identified by FT-IR spectroscopy. Surface roughness measurements were carried out by optical microscope, the Vickers hardness number was measured with the stainless steel sheet using a micro-indentation tester (Emco Test Durascan), the heat conductivity of the samples was analyzed by the home made thermal conductivity measurement system, thermogravimetric analysis (DTG, 60-AH, Schimadzu) was used to determine the filler mass fraction. Thermogravimetric analysis was performed in argon atmosphere from 30 to 850°C.

Results: It was found that the composites have multiphase component such as metallic dopant and organic binder.

In addition to the function and the phonetics used in dental practice, the recovery of natural dental aesthetics becomes more important. Anomalies caused by congenital and acquired causes such as excessive bruises on the teeth, diastema and perturbations, hypoplasia, fluorosis create aesthetic problems in patients who have abrasion and broken teeth [1-3]. Nanohybrid and bulk fill composite resins are frequently used in treatments for these aesthetic problems [4,5].

Dental composites vary in composition, initiator/activator system, filler type, loading, and particle size. It has been proved that these variations dramatically influence the composite properties. Accordingly, they put a burden on dental practitioners when selecting a material that fulfils the practical and clinical needs [6-8]. Advantages and disadvantages of dental composites should be well known by clinicians since these properties will directly affect the selection of restorative materials in clinical applications. Long-term performance of dental composites is determined by their physical, chemical and mechanical properties.

Bond structure of the composites is one of the important factors that affect clinical performance of resin composites [9]. Among several methods to determine the bond structure of composites, Fourier Transformation Infrared spectroscopy (FTIR) has been proven to be a powerful technique and has been widely used as a reliable method [10,11] as it detects the C=C stretching vibrations directly before and after curing of materials. FTIR based on the interaction between electromagnetic radiation and vibrations of the chemical bonds among atoms [12]. FTIR is a way of getting spectra by using an interferometer, and then performing a Fourier Transform (FT) on the interferogram to obtain the spectrum. An FT-IR spectrometer collects and digitizes the interferogram (https:// www.newport.com/resourceListing/technical-notes).

During the restorative treatment, the negative effect of heat increase on pulp tissue has been a matter of concern among the scientist [13]. This heat build-up is a biological problem on the tooth and for this reason it is important to evaluate the thermal conductivity and thermal analysis of the composite resins.

The thermal feature of composite materials is important for clinical applications. Any change in temperature can be transmitted to the pulp and can cause damage to pulpal tissue. Excessive thermal conductivity can cause thermal loading of teeth with following irritation of the pulp tissue, resulting in hypersensitivity, pulpitis or even necrosis of healthy tooth [14]. Thermal analysis techniques, such as Differential Calorimetry (DSC), Differential Thermal Analysis (DTA) and thermogravimetric analysis (TG) are also used to analyze of dental materials [15,16]. Thermal analysis is a property of the material which has been quantified in several in vitro investigations. In the most recent, commercial instrumentation with a standardised technique has been used, this being Differential Thermal Analysis (DTA) [17,18].

DTA is an appropriate method of measuring temperature rises produced during the setting of a range of tooth. Generally, TG/DTA measurements were made to observe the phase transitions, deformations and weight loss of the sample during heating.

These analyses are important for restoring minimal invasive cavities and clinical success; so, it is important the examination of these properties of commercially available dental materials.

According to the results of many studies, there is a need for dental clinicians to gather sufficient knowledge about physical, chemical, mechanical and thermal analyses of dental composites. These properties of dental composites are very important because of the potentially affect the pulp and surrounding tissues of teeth so as to minimize the occurrence of damage. Therefore, this research aimed to look at the structural stability, thermal conductivity, thermal analysis, materials’ homogeneity, X-ray analysis, FTIR analysis, EDX analysis, surface porosity and micro hardness. Meanwhile, composites’ inorganic fraction was also characterized. The inorganic fraction was analyzed using Scanning-Electron Microscopy (SEM). So, these analyses results suggest some clinical guidelines to minimize the damage to the pulp or the surrounding tissues.

Specimens of the 6 resin composites were prepared in reusable custom-made Teflon molds (split Teflon molds with an inner diameter of 6 mm and a height of 2 mm). Each composite was placed into the standard molds in 1-mm increments by use of prefilled syringes provided by the manufacturers. The composite resin increment was covered with a clear polyester matrix strip and a 1-mm-thick glass slide, which was gently pressed under a load of 200 gf during 1 min. Each increment was light-polymerized for 20 s following manufacturers’ specifications with a visible light polymerization unit (Woodpecker; Dental Wireless LED Curing Light Lamp, USA) with an output of 1400 mW/cm2 and a wavelength between 420 and 480 nanometers [27]. The cylindrical blocks were thereafter removed from the Teflon molds, thus providing a cylinder with the same dimensions of the bisected cavity (6 mm diameter; 2 mm height). Lots of materials were fabricated and stored in a light proof receptacle with distilled water at 37°C. The specimens were subjected to Thermocycling (TC) in distilled water for 2 × 3000 cycles between 5 and 55°C (n=10). The materials used in the present investigation are presented in Table 1.

Table 1. Materials used in this study.

The principle of the structural properties

The principle of the microhardness

The principle of the thermal conductivity

The heat conductivity of the samples was analyzed by the home made thermal conductivity measurement system (Figure 1). We used two brass blocks which the first base has a heater inside it and the second is the heat sink and both of them have k-type thermocouple inserted the surface of the blocks. We calibrated the system using Al (Alfa Aesar Cas No: 7429-90-5 which have thermal conductivity value 205 W/Km) [28]. It was used 120 W power to obtain temperature gradient in both side with PID temperature controller to reach 55°C temperature which is the highest temperature that can be applied without decomposition of the biomaterials. 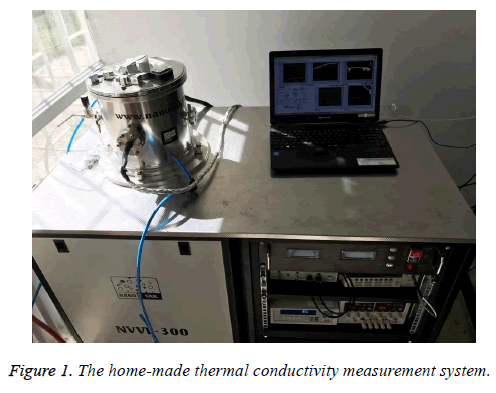 The principle of the thermogravimetric analysis

Thermogravimetric analysis (TG/DTA, Schimadzu DTG 60 AH) was used to determine the phase transitions and mass gain or loss of the sample. The resin composites were subject to a temperature rise from 30 to 850°C at a heating/cooling rate of 10°C/min. During the thermal measurements, we can detect organic and inorganic component of the sample. 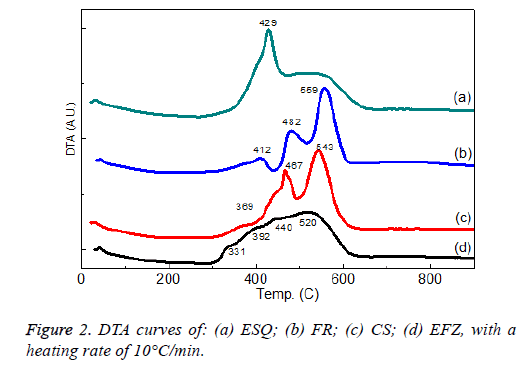 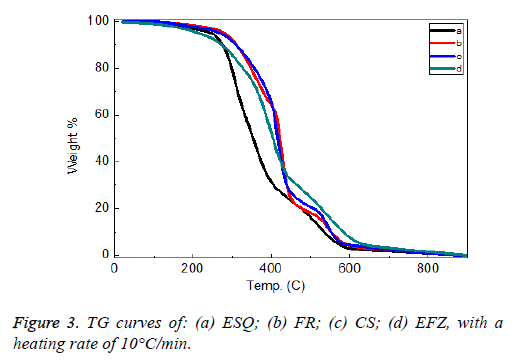 The sharp weight loss occurred between 200-650°C. The weight losses for all the composites are nearly equal and occurred at the same temperature range.

In a previous study, the authors showed that composites showed endothermic peaks between 253-363°C [29]. The endothermic peaks are related to the decomposition of the organic component and exothermic peaks are related to the carbonate group present in the composites. It was seen that the peak values were high in our work. This is caused by the fact that the filler content of the composites is excessive. Discacciati et al. found variable loss of mass in the range between 300 and 400°C [30].

A study by Atai et al., found that in thermal measurements the exothermic heat generated during isothermal cure is proportional to the number of double bonds reacted in the system [31].

In the work of Viljanen et al., different peak temperatures as measured for the photo polymerized specimens in the first heating ramp of the DSC scan have been observed [32]. The exothermic peaks indicate that the polymerization reaction is not complete after photo polymerization. Also, they found that the total polymerization exotherms of un-irradiated resins could not be determined because the resins did not polymerize although heated to 200°C in DSC. In this study, we found two exothermic peaks because of the structure and also chemical contents of the materials. 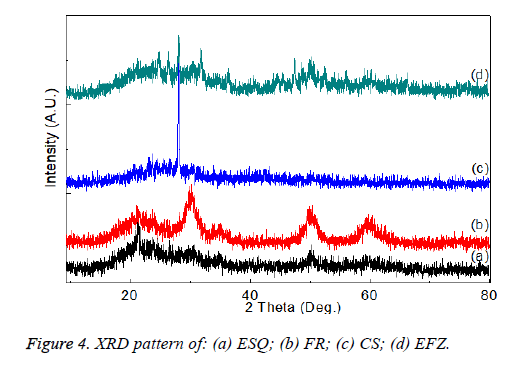 In this study, XRD pattern using CuKα radiation between 2-80° and Rad-B Dmax diffractometer. It was observed that elemental analysis was carried out in different studies. The accuracy of the results obtained in these two techniques was found to support each other.

In this study, It has been determined that the different peak values are related to the content of the organo-inorganic structure of the materials. The structures of the composites of ESQ, FR, CS and EFZ were found as Al2BaSi2O8 hexagonal, MoO3 orthorombic, ZrO2 cubic and SiO2 hexagonal, respectively.

The bond structures of the composites were investigated by FTIR spectra (Figure 5). It is well known that the composites in dental research have BisGMA, UDMA and TEGDMA organic binder which consist of C, H, N and O ions in the structures. 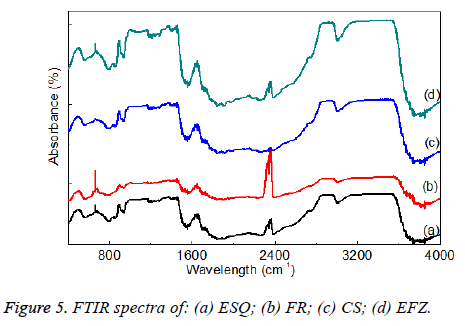 A study by Pereira et al., said that the FTIR method for determining residual unsaturated groups in dental materials has recently been discussed in detail [35]. They found that the aromatic peak originates from the aromatic rings in the Bis- GMA molecule, the amount of which remains unchanged during the polymerization. The peaks used in the analysis are the methacrylate C=C absorbance at 1640-1635 cm-1 and the aromatic C=C absorbance at 1610-1605 cm-1. In this study, the bands between 3428 cm-1 and 3481 cm-1 are related to O-H vibration modes in the structure as seen in reference [36]. It was observed C-H stretching bands at 2915 cm-1 -2964 cm-1 and C-O-C modes were found at 1068 cm-1. The other bands at 1408 cm-1, 1621 cm-1 and 1728 cm-1 were corresponded to (CO3)2, NH-CO and C=O stretching modes of the ions in the composites [28]. 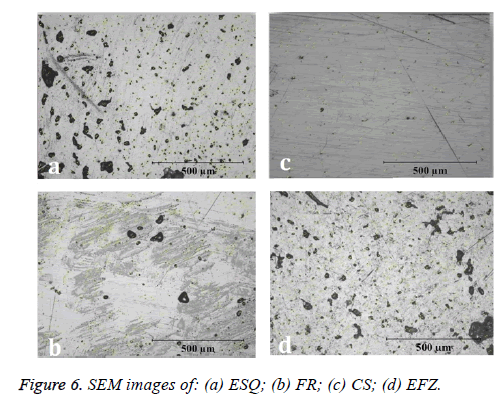 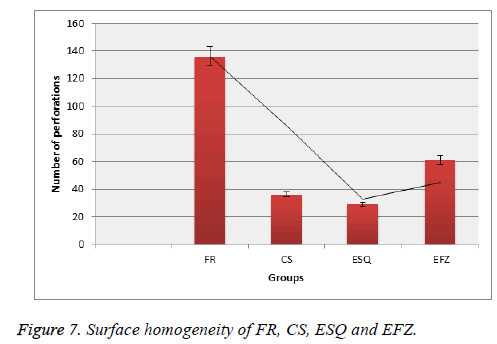 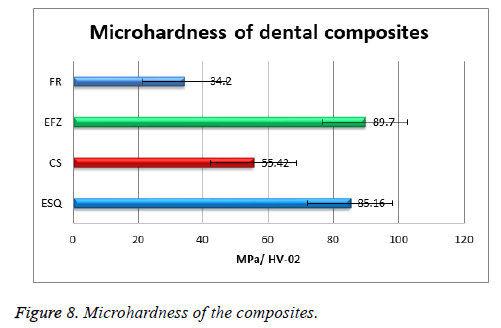 Figure 8: Microhardness of the composites.

The treatment of deep carious lesions is the removal of all infected and affected dentin to prevent pulp and to prolong the life of restorations. It is desirable that the thermal conductivity of the dentin tissue and the composite material be similar.

The effects of temperature changes on the adaptation of composite resins in dental applications especially in the restoration of deeply decaying teeth restoration have been extensively studied. But studies on updated restorative materials are lacking. A temperature rise of 5.5°C has been reported to damage the pulp [46,47]. 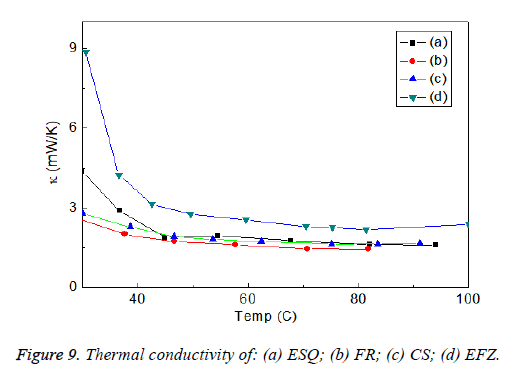 In this study, the structural, thermal and mechanical properties of the dental composites were investigated in detail. It should be noted that the composites consist of organic phase and crystalline phase as indicated in the XRD section. It can be said that variations in resin matrix and filler technology influenced the mechanical and physical behavior of different composite materials. FTIR spectra of the composites showed C-O-N-H bonds in the structure. While the lowest hardness value was observed in the composite named FR, the highest value of the micro-hardness were found as EFZ. The lowest thermal conductivity among the composites was found for the composite of FR.

Direct comparison of composite effectiveness in clinical studies is very difficult. Our study aimed to analyze in laboratory tests under standardized and simulated clinical conditions. The variability of the mechanical, chemical and physical properties measured within material groups.

The reason for the variation in the range of the structural properties, thermal conductivity, Differential Thermal Analysis (DTA), Thermogravimetric analysis (TG), surface homogeneity, micro hardness, X-ray analysis is not only due to the effect of experimental factors such as the measuring method, preparation of materials, but also because many factors such as type of hand pieces used, light curing unit, diameters of cylindrical blocks will affect these parameters.

This study was performed under the project provided by Inonu University research council under contract number 2015-48.

We would like to thank Erdinc OZ for performing the thermal conductivity measurements during to study.