We obtained informed consent from all participants prior to involvement in our study using a protocol that had been approved by the Institutional Review Board.

Between April 2010 and May 2013, 220 diagnosed nasopharyngeal carcinoma patients, (128 males and 92 females) with a mean age of 46.45 ± 18.14 years (range, 21-76 years) were randomly examined in the neck region by two ultrasonography specialists with previous clinical experience. All nasopharyngeal tumors were diagnosed by epipharyngoscope and confirmed by histological examination. A total of 405 cervical lymph nodes were found and characterized.

All ultrasound examinations were performed using GE LOGIQ 9 (GE Healthcare, US) ultrasonic diagnostic apparatus, employing a liner transducer with a frequency setting of 5-12 MHz and thyroid preset for each ultrasound scanning. Patients assumed the supine or lateral position during examination. Two-dimensional gray scale and color flow Doppler ultrasound scanning data were obtained during the investigation. The numbers of lymph nodes, their location, size, internal echo, capsular invasion, blood flow distribution including the type of lymph node flow, systolic peak velocity (PSV) and blood flow resistive index (RI) were determined during examination. The relation of lymph nodes with the surrounding tissues was also noted and all data and images were recorded by a picture archiving and communication (PACS) system.

Grade 0: no blood flow signal within the tumor;

In addition to the ultrasound examination of cervical lymph nodes, ultrasound-guided core needle biopsy of nodes was performed for histological examination. For biopsy magnum instrument (Bard Medical,US) with a 18G disposable magnum needle were used for each lymph node. In order to apply multi-point and repeated puncture measurements, each lymph node was punctured at least three times. Different lymph nodes were numbered respectively. The pathological and histological results were compared with ultrasound data to differentiate lymph node metastasis from benign nodes so that analysis could be completed.

SPSS 13.0 statistical software is used to perform the binary logistic regression analysis, and predictor variables were defined as statistically significant if P < 0.05.

Out of 405 lymph nodes examined, 303 (74.8%) were confirmed to be metastatic based upon pathology and histology results. For the remainder of the lymph nodes, 91 (22.5%), contained chronic arthritic changes and 11 (2.7%) exhibited clinical features that were categorized together in this study as "Other".

The ultrasound image characteristics and color flow data revealed that some the lymph nodes were round or irregular in shape with varying internal echo intensities (Figure 2), including low echo and stronger or cystic echoes. Most of these echoes were dispersed in distribution, but the fusion of echo signals could also be observed in some cases (Figure 3). For blood flow assessment of the lymph nodes, part of the flow was distributed around the lymph nodes with blood vessels of uneven thickness being present that exhibited irregular shape and distortions (Figure 4). 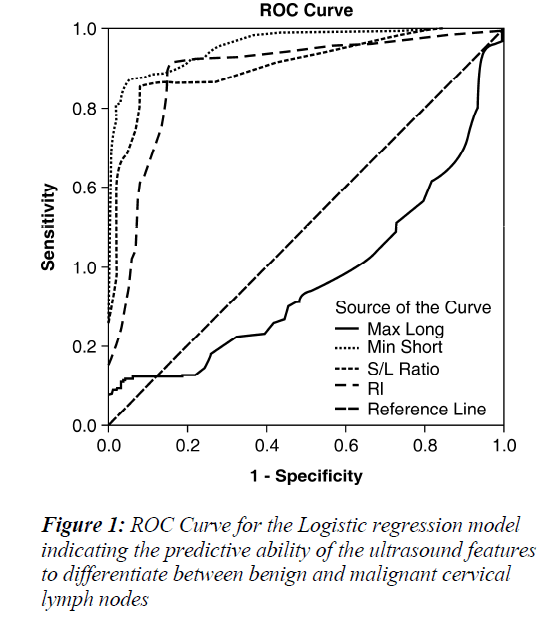 Figure 1: ROC Curve for the Logistic regression model indicating the predictive ability of the ultrasound features to differentiate between benign and malignant cervical lymph nodes

To analyze the data of lymph node ultrasound features, the measurements of long and short diameters (Figures 2 and 3), short/long axis ratio, and lymph node blood flow resistive index (RI) (Figure 5) were evaluated as diagnostic predictor variables for the differential diagnosis of benign and malignant lymph nodes. 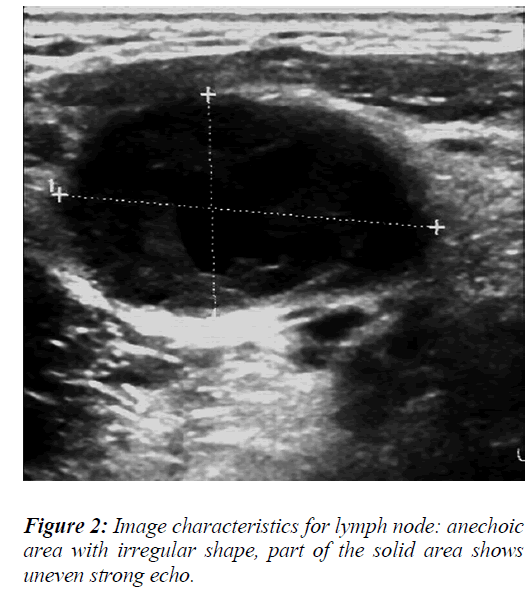 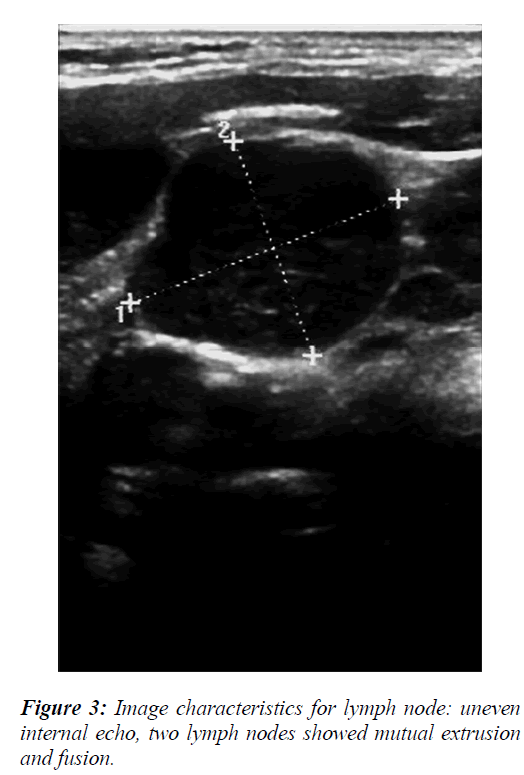 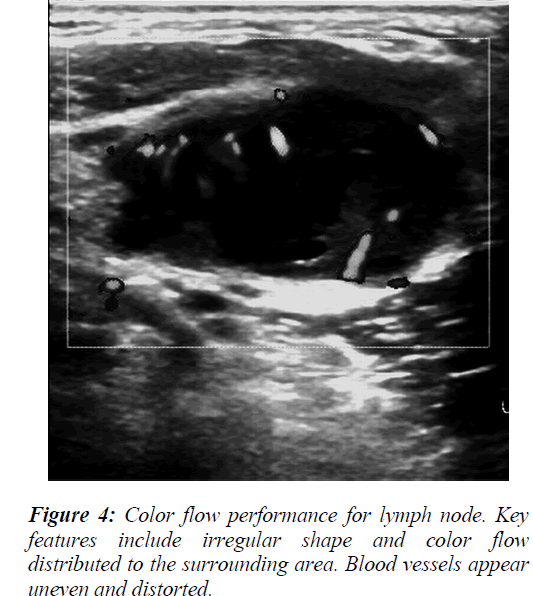 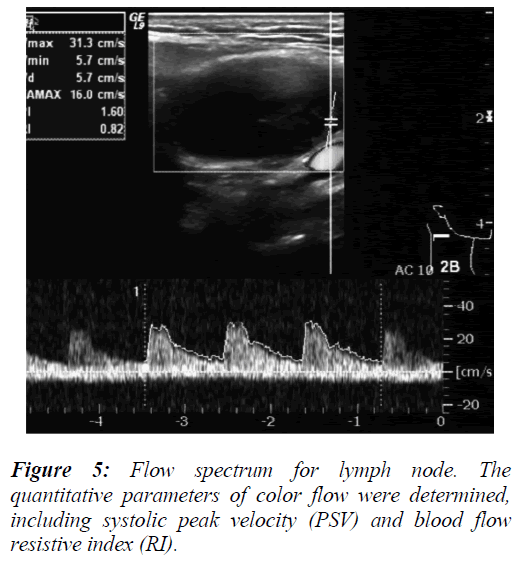 The logistic regression analysis used the following variable definitions: the benign versus malignant pathological results were classified as a binary outcome variable and the possible ultrasound features for the benign and malignant differential diagnosis were independent/predictor variables. The logistic regression analysis results for eight ultrasonographic predictor variables are shown in Table 1.

The model was evaluated using the Wald test, to obtain the following result, x2=90.459 ， p=0.000 ， indicating statistical significance. A receiver operating characteristic (ROC) curve was made to estimate the diagnostic accuracy of each ultrasound-derived predictor variable. The area under the ROC curve (Az) values for the four ultrasound parameters ranged from 0.375-0.961 ， and p=0.000 for all parameters (Table 2). Minimum short axis values and the S/L ratio were found to have the largest Az values (Table 2), implying that these parameters have a strong diagnostic potential for distinguishing benign versus metastatic cervical lymph node status.

At present, nasopharyngeal carcinoma incidence rates compared to other cancer syndromes diagnosed in China. There are many lymph vessels the in nasopharynx, which predisposes the cervical lymph nodes to invasion by metastasis. The most conspicuous clinical symptom of lymph node involvement is lumps in the neck apparent in only 40-50% of first-visit patients [5]. However the proportion of detected cervical lymph node metastasis is > 75% after thorough clinical examination [5], and metastasis is a strong determinant for nasopharyngeal carcinoma treatment outcomes and prognosis [6,7]. The size of cervical lymph nodes is often determined by palpation, the the accuracy of this method depends primarily upon the level of clinician experience. In contrast, ultrasonography is an economical and practical method of lymph node examination that results in effective detection and requires no radiation and or contrast agents [8]. Ultrasound examination can determine the shape of lymph nodes, quantify the intensity of internal echoes and indicate blood flow distribution. Abnormal appearances of lymph nodes indicative of cystic changes and calcification in addition hemodynamic assessment can be performed by ultrasound allowing the clinical to distinguish between the benign and malignant tissue.

The morphological changes for metastatic lymph nodes detected through the four ultrasound features correlated with tumor pathological changes identifed through biopsy. Also the long and short axis dimensions were shifted, with the lymph nodes appearing rounder in shape (i.e., S/L>0.5). From Table 1, standard regression coefficient (Wald) analysis results are shown for the four predictor ultrasound parameters. Among the four predictor variables with statistical significance, minimum short axis had the highest Wald statistic value for the differential diagnosis of the benign and malignant lymph nodes, while the maximum long axis measurement was the lowest value. This results implies that short axis measurements have more diagnostic value, and this was consistent with previous reports [8]. The values for area under the ROC curve (Az) (Table 2) similarly indicate the diagnostic superiority of minimum short axis (Az = 0.961) compared to maximum long axis was (Az =0.375). This suggests that the transverse diameter of the enlarged lymph nodes could be used as one of the main indicators for the diagnosis of cervical metastatic lymph nodes by ultrasound.

Multiple factors besides lymph node size must be considered in attempting to diagnose cervical lymph node metastasis, as this measurement alone is not a sufficient criterion. The shape of inflammed lymph nodes and those exhibiting reactive hyperplasia lymph nodes are frequently oval, while malignant lymph nodes can be round or irregular [9].

However the ultrasound-derived short/long (S/L) axis ratios of lymph nodes might be more diagnostically meaningful, as high S/L values are characteristic of malignant lymph nodes, such that S/L>0.5 is frequently observed for malignant lymph nodes while S/L values <0.5 has been observed for benign lesions [9,10]. In Table 1, standard regression coefficient (Wald) analysis results are summarized and S/L ratio was the diagnosis indicator second to minimum short axis for differential diagnostic power. As shown in Table 2, Az for S/L ratio was 0.911, close to the diagnostic accuracy value observed for minimum short axis. However S/L ratio is limited in usefulness for determining the nature of smaller lymph nodes, and should not be considered as a sole indicator for differentiating between benign and malignant lymph nodes [11]. Therefore it would improve clinical assessment and diagnosis accuracy for cervical lymph nodes according to combine measurements of minimum short axis with short/long axis ratio.

Blood flow resistive index (RI) was another significant variable identified through logistic regression analysis. The changes in observed lymph node resistance can be related to the hemodynamic changes caused by the growth of malignant tumors. RI was affected by tumor type and lymph nodes metastasis and specifically RI was higher when the lesion was malignant and the main factor was tumor doubling [11]. Blood vessels of malignant lymph nodes were observed and analyzed. We observed a change in angiogenesis and stenosis; occlusion or expansion emerged and if the lymph nodes were malignant, the vessels in the nodes were extrude or obstructed [12]. During the process, blood flow RI became higher. Compared with pathological study, blood flow RI can further inform the nature of cervical lymph nodes.

When examining lymph nodes with color Doppler ultrasound, the structure of benign lymph nodes is usually unremarkable, exhibiting typical one-way, swinging-door type flow with regular distribution. In contrast metastatic lymph nodes exhibited surrounding blood flow caused by “centripetal” invasive growth of the cancer cells inside the lymph nodes such that the normal lymph portal blood supply was destroyed. In this case the tumor can obtain blood from only the marginal blood vessels around lymph nodes or from blood vessels in the surrounding tissue. The characteristic flow information for malignant lymph nodes under microcirculation was also confirmed by contrast-enhanced ultrasound for cervical metastasis lymph nodes of nasopharyngeal carcinoma patients studied by other investigators [13]. Therefore the blood flow characteristics detectable by the ultrasound could help to differentiate the benign and malignant lymph nodes. Because of the tiny blood vessels in lymph nodes and the slowed speed of blood flow, signal detection by Doppler technology is limited, which negatively impacts diagnostic performance.

We used logistic regression analysis to identify four ultrasound parameters with as significant predictor variables for binary classification of cervical lymph nodes from nasopharyngeal carcinoma patients as benign or containing metastatic malignancy. All of ultrasound parameters were diagnostically meaningful, but each variable had a predictive limitation. Therefore we suggest that the combined analysis of these indicators would be an effective approach towards distinguishing between benign and malignant cervical lymph nodes, which has also been indicated in other investigations of staging lymph node malignancy via ultrasound examination [14,15]. In our study of nasopharyngeal carcinoma cervical lymph nodes, we found that S/L ratios >0.5, increased blood flow RI values, and increased minimum short axis can be used as clinical diagnostic criteria for malignant invasion of cervical lymph nodes.

The size, shape, internal echo and blood flow distribution for cervical metastasis lymph nodes in nasopharyngeal carcinoma have many characteristic manifestations detectable by ultrasonography. We suggest that the diagnostic factors predictive of cervical metastasis lymph nodes established in this study, may contribute to earlier detection, improved differential diagnosis and informed treatment selection for nasopharyngeal carcinoma patients.

We are grateful to Mr. Chao-wen Qian. Professor, department of ultrasound in Zhejiang Cancer Hospital for his invaluable assistance, counsel and acute criticism. His zero-tolerance attitude for mediocrity has led to innumerable improvements of this paper. Thanks are also due to a number of my friends who generously read the manuscript in its entirety and to give me the benefit of their tremendous suggestions. Each of them deserves credit for the quality and style of this paper. However, I am solely responsibility for any shortcomings.