The journey of cognitive evolution

Throughout the development of modern science, increasingly complex data and logical models have gradually replaced the direct knowledge of nature motion and reality. During the journey of discovering natural truths, it often seems as though there is no possibility to recognize and break through the cognitive chaos without further complicating the problem. However, our current cognition represents a specific cognitive stage, with fixed cognitive models. We are inside of this limited cognitive zone without a complete picture of the foundational principles or the continuous developmental path of cognition. Without the cognitive basis of motion reality, this will inevitably result in the increasingly intensified conflict between the development of human social practice and the natural motion environment. Therefore, this research focuses on exploring the roots of human cognition and it’s track of development is a new angle allowing for a breakthrough of certain cognitive dilemmas

Only humans have broken through the limits of instinctive cognition to enter the intermediate cognitive stage, so far as we are aware. At this stage consciousness became active and a new cognitive orientation developed. A qualitative change in activity occurs when moving from the primary to intermediate stage of conscious activity. This represents a change in overall trend of activity, from passive reactivity to cognitive initiation. This is a cognitive stage in which consciousness creates cognition by actively associating information. For example, through integrating dispersed bits of information and experiences regarding apples, such as "round”, “crunchy”, “eat”, “red” and “sweet", we structure a sentence that relates a concept that apples can be eaten and red apples are sweet. Integrated cognition is a functionally oriented cognition, as the cognitive form is integrated with a specific structure to realize certain functions and meet specific needs. This cognitive model functions through consciousness actively associating and integrating information, and thus can be called integrated cognition [2]. The functionally-oriented integrated cognitive mode is the dominant mode at this stage.

Thus, integrated cognition is based on a function-oriented mechanism which is, at the same time, blocking the path to further understanding of the true form of the object. For example, sensory forms are integrated by interactive features which have replaced the true motion form of reality. It supports functional cognitive needs but also blocks the awareness of the existence of motion features and mechanisms, forcing us to discover motion through integrated information.

When consciousness is weak, it is unable to reach beyond the information, so the integrations become, instead, a replacement for the true object, rather than mere reference points. Integrated cognition can be considered a transitional stage towards the development of humanity’s active cognition. After this stage, instead of directly associating information, more complete and continuous consciousness activity will enable the discovery of the truth behind the information (Figure 2). 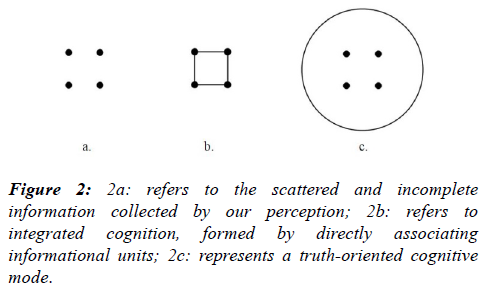 Figure 2: 2a: refers to the scattered and incomplete information collected by our perception; 2b: refers to integrated cognition, formed by directly associating informational units; 2c: represents a truth-oriented cognitive mode.

What is essential for cognizing motion is the constant action of consciousness, which restores the motion features and offers further understanding of motion laws during its own continuous movement. Within motion cognition, if you manage to keep the cognitive process like a smooth and constant mind stretch, rather than abstract logical thinking and data analysis, you are about on the right track.

To apply the motion cognition mode towards understanding natural motion, there is a need to first clarify that we can replace reality with a patchwork of integrated models, but they do not have the characteristics and mechanisms of motion. The mode of practice reveals the underlying cognitive principles and limits [4]. This can be seen in the differences between artificial mechanically integrated structures and a naturally occurring biological motion system.

The course of cognitive development and evolution 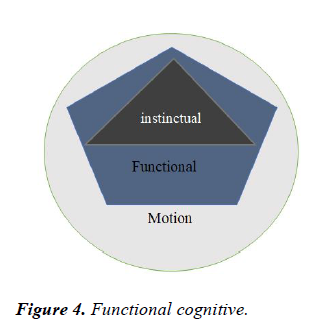 The driving force of cognitive development is the development of consciousness. Currently, this development has driven us to the end of the functional stage of cognition, after missing the natural window for another cognitive breakthrough. The clear sign of that window was the emergence of a new cognitive orientation, one of free thinking and a human obsession with discovery of the universal truths. This was a sign of the increase of consciousness activity, as it tried to break through the restrictions of the integrated cognitive barrier. However, the increase in consciousness activity has been, instead, utilized to promote the integrated cognitive model towards increasingly complex and developed forms.

The formation of the motion cognitive form is like a tree, or life; it exists in the continuous development of motion. The integrated cognition is like a structured machine. When we miss the cognitive evolution, we harvest the creation of digital and mechanical technology but miss the truth of nature and life.

Within scientific study and technological development, the facts based on interactive experiments are regarded as scientific knowledge with a realistic basis. This is inaccurate. Due to the existence of cognitive barriers, although our interaction with reality and functional creation are effective, we don’t understand the true form of reality and the real influence human practice has had on the world around us. This point is very obvious from the macro perspective of the development of modern society: functional development is unprecedentedly successful, yet, at the same time, the destruction of our living reality is also unprecedented and unexpected.

During this recent period of human history, the rapid acceleration of functional development has been lacking a basis in motion reality. Humans are led by the vision of a freed mind and the pursuit of truth. However, we remain solidly trapped within the functional cognitive mode with limits and increasingly complex barriers

The historical crisis of human development

The development of cognition continues to deviate from the main track. That is the cause of the current predicament of human development. It is still possible to adjust the course, though the hour is late and much damage has already been done.

It needs to be made clear that the evolutionary path of human cognition is not to continuously develop purely functional cognition, but rather lies in the breakthrough and upgrading of the cognitive mode which can realize motion and reality cognition.

Motion cognition can the repair the defects of functional cognition and allow for escape from the dilemmas caused by blind development divorced from reality and a base of motion.

When we understand the true causes of our failures and dilemmas, the way out is clear, and that is to return to track of cognitive development and evolution.

Motion cognition is dominated by the continuous movement of consciousness. Therefore, it is cognition with motion form and contains no bottleneck within the cognitive development. It is the final stage of development of human cognition.

Cognizing motion is just the basic application. The cognitive model will ultimately determine the social model. It will transform human society from one of functional orientation to one that is motion and reality-oriented.

This will allow society to enter an advanced stage of human civilization development [5]. In this stage, creation with motion and reality foundation will be developed and human society will begin to maintain coordination and sustainability with the natural motion environment.