Angiogenesis, which is described as the formation of new blood vessels, is a complex process that includes endothelial cell activation, controlled proteolytic degradation of the extracellular matrix, proliferation and migration of endothelial cells, and formation of capillary vessel lumina [1]. Under normal circumstances, the formation of new blood vessels occurs during wound healing, organ regeneration and in the female reproductive system during ovulation, menstruation, and the formation of the placenta [2]. It also plays a role in the pathophysiology of multiple disease processes, including tumour neovascularization, ischaemic recovery, and wound healing. In addition, angiogenesis and cardiovascular diseases are strongly related to providing the distal perfusion [3]. The investigations were focused on ways to obtain therapeutic benefits in low-perfusion situations with neo-angiogenesis. As such, research on therapeutic angiogenesis and antiangiogenic has become more frequent in recent studies [4].

Amiodarone is an effective antiarrhythmic agent; however, standard Amiodarone therapies can cause significant side effects. For example, the most common side effect of intravenous treatment is hypotension, which can be serious and lead to cardiovascular collapse, even resulting in fatality [5,6]. While many side effects have been reported previously, its effects on the developing heart and regenerating tissues have not been represented sufficiently [6]. This study was designed to clarify the relationship between angiogenesis and Amiodarone. In the present study, we aimed to demonstrate the antiangiogenic potency of Amiodarone by using the chick embryo chorioallantoic membrane (CAM) model.

Preparation of the pellets

In this trial, the possible antiangiogenic effect of Amiodarone HCl (Cordarone®, 150 mg/3ml Sanofi-Dogu Ilac AS, Istanbul, Turkey) was studied. The Amiodarone used was in its commercially available form as a soluble infusion. Agarose (Merck, Damstadt, Germany) was added to distilled water to obtain a 2.5% (w/v) solution, which was autoclaved at 121°C and under one atmospheric pressure to provide dissolution and sterilization. Subsequently, it was cooled to 37°C in a sterile container, at which point the study drug was added. The positive control group was constructed with the antiangiogenic agent Bevacizumab, which is known as a specific vascular endothelial growth factor inhibitor [7].

Appropriate volumes of solutions were used to achieve three different concentrations of the drug (10-4, 10-5, and 10-6M). Approximately sixty pellets were used for each study set. Therefore, approximately 1 ml of combined agar and drug solution (10 μl×100 =1 ml) was prepared initially for the drug. The drug solutions with 100 IU, 10 IU and 1 IU/10 μl concentrations were prepared by diluting these initial mixtures ten-fold with the agarose solution again.

Using a micropipette, 10-μl drops of this mixed solution were placed on previously sterilized, vertical, cylindrical, stainless steel rods 5 mm in diameter to obtain circular pellets with the same diameter. The pellets were then left to solidify at room temperature in a sterile setting.

The fertilized hen eggs were incubated in a horizontal position, with environmental conditions of 37.5°C temperature and 80% relative humidity. On the fifth day of the incubation period, 5 ml of albumen were taken through the eggshell with a syringe (Figure 1A), and a shell piece 2-3 cm in diameter was removed from the opposite side of the eggs. Normal development of the CAM was verified (Figure 1B), and malformed or dead embryos were excluded. The windows on the eggshells were sealed with gelatin, and the eggs were incubated for 72 more hours, until the CAM reached 2 cm in diameter. Subsequently (on day 8), the seal was removed and the pellets were placed on the chorioallantoic membrane of each egg (Figure 1C). The seal was replaced and the eggs were incubated for 24 hours. The angiogenesis level was evaluated after that period. 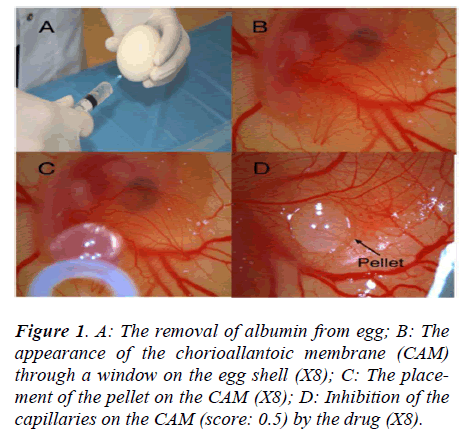 Figure 1: A: The removal of albumin from egg; B: The appearance of the chorioallantoic membrane (CAM) through a window on the egg shell (X8); C: The placement of the pellet on the CAM (X8); D: Inhibition of the capillaries on the CAM (score: 0.5) by the drug (X8).

There were five group created; pellet group without drug were utilized as negative control group (Group I), Bevacizumab was used for positive control group (group II), three different dosage of drug (10-4, 10-5, and 10-6M) groups were classified as group III-IV-V respectively. For each tested drug solution, 20 eggs were used. All the tests were duplicated. Eggs in which the pellets caused inflammation and embryo toxicity were excluded. Totally 200 eggs were used for five created groups (20 for each group, 20 for confirmation each test). Negative control group consisted with pellet without drug, did not demonstrate any antiangiogenic behaviour.

The angiogenesis scores were compared with a Kruskal- Wallis ANOVA test and a Mann-Whitney U test. A p value of less than 0.05 was considered statistically significant. 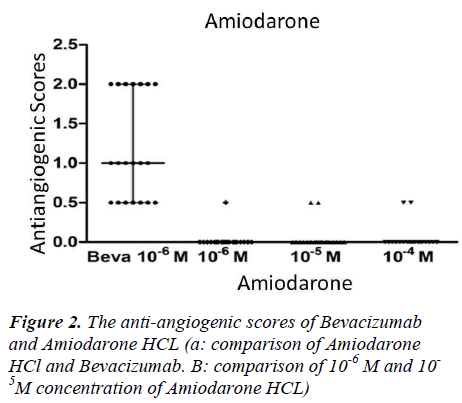 Angiogenesis is a vital process that plays a role in embryonic development, menstrual cycle, and wound healing; it is controlled by proangiogenic and antiangiogenic factors [2,10]. Recently, the CAM model has long been preferred for the studies on tumour angiogenesis and metastasis, as well as the studies of the standard drug molecules with angiogenic or antiangiogenic activity [11]. The myocardium is a highly oxygen-dependent tissue, and the continuity of blood flow is critical for functional protection in acute ischaemic conditions. Thus, therapeutic angiogenesis for myocardial tissue has gained importance with recent advances. However, recent studies indicate that maintaining existing physiological angiogenesis response is important in stimulating neo-angiogenesis with therapeutic methods [12,13]. Both regulatory factors and basic mechanisms that enrolled at myocardial angiogenesis should be investigated for the defining possible therapeutic approaches [13].

Amiodarone HCl effectively controls a wide spectrum of atrial and ventricular arrhythmias. However, because of the wide spectrum of the mechanism of action of Amiodarone and the limiting possible side effects, such as thyroid dysfunction, pulmonary fibrosis, and dermatologic changes, its long-term use may be limited in some patients, and care should be taken when administering the drug [14]. These side effects have prompted researchers to observe other potential effects of Amiodarone HCl. Traupe et al. showed that Amiodarone rapidly accumulates in atherosclerotic vascular tissue, abolishes vascular autorhythmicity, and improves endothelium- dependent function in atherosclerotic arteries. The researchers suggested that these effects following Amiodarone administration might contribute to its antiarrhythmic effects [15]. Chen et al. found that Amiodarone treatment caused failure of cardiac valve formation in zebrafish embryos [6]. These complex effects have led to the notion that Amiodarone HCl can affect neo-angiogenesis in regenerating tissues such as the myocardium. As such, we investigated the possible antiangiogenic effects of Amiodarone HCl on a CAM model in this study; non-significant antiangiogenic effects were observed at a 10-4M dose of Amiodarone HCl, with antiangiogenic scores of 1.0 in one egg and 0.5 in two eggs (p>0.05). The antiangiogenic activity of Bevacizumab, known as a specific vascular endothelial growth factor inhibitor, was naturally higher than that of Amiodarone HCl (p<0.05).