Background: Analgesics are reported to be responsible for 11.3% of the poisoning events in the 20 y data obtained from the Poison Counseling Centers. In this study, we aimed to investigate the relationship between epidemiological characteristics of patients, drug levels detected in acetaminophen poisoning and course of the disease due to timely, late admission and severity of intoxication.

Conclusion: Late admission of the patient who has been admitted to emergency services due to acetaminophen poisoning is related to higher levels of acetaminophen, higher hospitalization rates, and lower discharge rates. It is useful to apply more careful and concerned approach to the patients especially if they apply late, and it will contribute to the treatment of patients.

Poisoning has been one of the major problems affecting human health since ancient times and the frequency varies according to the cultural and socio-economic structure of societies [1]. It is known that poisonings for suicidal purposes constitute 95% of all cases of poisoning, with more frequent in women. Drugs being used for preventing ache are the leading cause of poisoning [2].

In Turkey, there are 150.000-200.000 cases of acute poisoning every year; 58.6% of them are caused by drugs [3]. In the United States, analgesics are reported to be responsible for 11.3% of the poisoning events in the 20 y data obtained from the Poison Counselling Centers [4]. It was reported that acetaminophen accounts for 47.1%, other Non-Steroidal Anti- Inflammatory Drugs (NSAID) account for 36.1%, salicylates account for 7.7% and opioids account for 8.4% of analgesics poisoning [5].

Acetaminophen is a pain reliever with analgesic, antipyretic and weak anti-inflammatory effects, and poisonings related with this drug are very common in our country [3]. When taken from the oral route, acetaminophen is absorbed quickly and the effect starts timely [6]. Plasma level reaches the most effective level within 30-60 min. Absorption is reduced by nutrients [7]. After one dose the analgesic effect lasts for 3-4 h. The half-life at the usual dose is 2.4 h; it can be up to 7.3 h in overdose due to nonlinear elimination kinetics. Due to the low level of gastrointestinal toxicity, full doses can be combined with low doses of anti-inflammatory analgesics [6-8].

In this study, we aimed to investigate the relationship between epidemiological characteristics of patients, drug levels detected in acetaminophen poisoning and the course of the disease due to timing, late admission and severity of intoxication.

This retrospective observational study complied with the guidelines of the Declaration of Helsinki and was approved by the Public Ethics Committee of the Haydarpasa Numune Training Hospital, which is a tertiary referral center located in the Istanbul City. We reviewed the data of the patients admitted to the emergency department of Haydarpasa Numune Training and Research Hospital between Jan 2013 and Dec 2015. Because this study involved a retrospective review of existing data, specific informed consents were not obtained from the patients. However, informed consent of the risks of acute acetaminophen poisoning and all treatment modalities was obtained from all patients upon their initial admission.

All demographic, clinical and laboratory data were collected and the mortality rate was analysed. Liver enzymes, INR, platelets, venous blood gas and demographics of two groups were evaluated through the timely and late applicants. The diagnoses of acetaminophen intoxication were based on clinical, physical and laboratory examinations and confirmed by plasma acetaminophen levels (fluorescence polarization immunoassay). Patients were excluded if they were younger than 18 y or did not have detectable acetaminophen levels in the blood despite a positive history of ingestion or if they had major systemic comorbidities, such as cancer or heart, lung, renal or liver diseases.

The protocols that were used to treat patients included gastric lavage with large amounts of normal saline, which was followed by the infusion of 1 g/kg activated charcoal and 250 ml magnesium citrate through a nasogastric tube. Magnesium citrate was used to prevent constipation after the charcoal administration. The use of the N-acetyl cysteine antidote was determined with toxicity estimations from the Rumack- Matthew nomogram for single acute acetaminophen overdose/ ingestion.

Data was analysed with Statistical Package for Social Sciences (SPSS) version 17. The continuous variables are expressed as means and standard deviations, and categorical variables are expressed as numbers with percentages in brackets. All data were tested for the normality of the distribution and the equality of standard deviations before the analysis. Parametric continuous data was analysed by student-T test, whereas nonparametric data were analysed by Kolmorov Similgrow test. Ki-Square test was used to analyse categorical data. P<0.05 results were accepted as statistically significant. 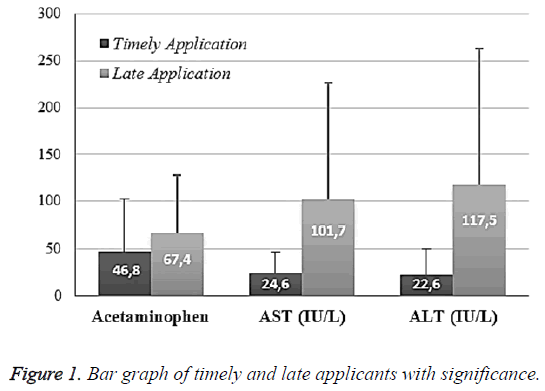 Figure 1: Bar graph of timely and late applicants with significance.

Table 1: Test results of timely and late applicants with significance.

In studies conducted, it was reported that most of the analgesic poisonings occur with acetaminophen [4]. Acetaminophen is a pain reliever with analgesic, antipyretic and weak antiinflammatory effects and is widely preferred in our country [9]. Similar to the poisoning rates in the world, this drug-related poisoning is also common in Turkey [3]. The results of this study are very valuable in terms of evaluating the epidemiological characteristics of patients in our country for acetaminophen-induced poisoning and have importance for evaluating timely and late application of acetaminophen poisoning and its course.

Acute liver failure or fulminant hepatic insufficiency is an important and serious complication of acute acetaminophen poisoning [7]. At therapeutic doses of acetaminophen, 90% is metabolized to sulphate and glucuronide conjugates in the liver and excreted into the urine [10,11]. Very little is metabolized by the cytochrome P450 CYP2E1 subtype in the liver. In this way, also known as the mixed-function oxidase pathway, Nacetyl- p-benzoquinonimine (NAPQI), a toxic, highly reactive and electrophilic intermediate product is formed [12]. NAPQI is arylated and binds covalently to hepatocyte macromolecules, leading to oxidative damage and hepatocellular necrosis [5]. At normal doses, NAPQI rapidly converts to non-toxic cysteine and mercaptan compounds as a conjugate of hepatic glutathione and is excreted in the urine [13]. At toxic doses, when the sulphate and glucuronide pathway is saturated, it causes an increase in acetaminophen fraction, which is metabolized via the cytochrome P450 enzymes [14]. When the liver glutathione stores are reduced by 70%, NAPQI accumulates and leads to liver damage. The severity of the resulting liver necrosis depends on the activity of the glutathione stores, the cytochrome P450 system, and the glucuronization system [10,12].

The treatment decision for acute acetaminophen overdose is usually made using the Rumack-Matthew Nomogram [19]. Generally, NAC treatment should be started when the concentration of plasma acetaminophen in a blood sample taken at 4th h exceeds 150 mg/l [20]. It is not possible to start NAC therapy on time by using the Rumack-Matthew Nomogram in patients with late applications [21]. Therefore, levels of acetaminophen that have reached toxic levels as a result of late admission have a higher risk of acute hepatic failure in patients. In our study, late applicants showed significantly higher levels of AST and ALT compared to timely applicants. Plasma levels of acetaminophen in late applicant patients were also significantly higher than in timely applicant patients.

There are many reasons to be able to explain higher levels of blood plasma acetaminophen levels in late applicant patients, such as not being able to apply gastric lavage and nonactivated carbon delivery, the patient being more stable for suicide, and the longer waiting time to come to the hospital. When looked at the distribution of acetaminophen levels in late applicant patients, it was observed that blood levels were very low in the major part of the patients, while blood levels reached toxic levels in the other part. As the reason for this, it may be considered that some patients may receive low doses of acetaminophen, reflect the situation as a suicide attempt and obtain secondary gains, and be brought to the hospital with the persistence of their relatives. The patient’s stability in the suicide attempt, taking more medication, staying away from medical help, not seeking for medical help and to not treating with active carbon with gastric lavage may be considered as a reason in order to explain the high levels of acetaminophen in late applicant patients.

Phase-1 of acetaminophen poisoning usually involves the first 24 h of symptoms [9]. Symptoms usually include nausea, vomiting, anorexia, abdominal pain, lethargy, and diaphoresis. In this stage, elevation in hepatic levels and deterioration of blood values are not expected [22]. However, according to our study, results of liver function tests in the first 24 h were significantly higher in late applicants compared to timely applicants [11]. This situation is related with late-onset NAC treatment, not being able to treat with activated carbon through gastric lavage and much higher blood plasma acetaminophen levels in late applicants [23]. Hepatotoxicity is rarely seen below 12 g and is usually found in doses above 10 g. According to the Rumack-Matthew Nomogram in phase 1, the initiation of treatment according to the 4th h is recommended; but it is clear that late application in phase 1, for example at 12 or 18 h, includes differences with timely application, and the duration of the treatment and the severity of both the treatment and the liver effects [21,24]. A statistical difference was observed in both levels of acetaminophen and liver enzymes between the timely applicant and late applicant patients in phase-1 in our study.

Phase-2 includes the first 24-72 h in acetaminophen poisoning. Symptoms are so low as to disappear [6]. Liver enzymes, bilirubin, PTZ and INR values are at abnormal levels. Some patients complain of right upper quadrant pain, and when they have a liver biopsy, centrilobular necrosis is observed [18]. In phase-3, nausea and vomiting recur. The somnolence associated with the neurological system, confusion and even coma findings appear. At this phase hepatocellular damage is severe and liver enzymes can rise to over 10000 IU/lt. Phase-4 is the recovery phase and 70% of patients with acute hepatic failure can reach to this phase [1,14,22].

Acetaminophen is a drug that can be easily accessed worldwide with sales over the counter. The fact that toxic doses of this drug are sold in a single package increases the acetaminophen-related mortality. Selling in quantities that are not toxic to adults in a single package by reducing the packet doses of this drug, at least preparing low-dose packages for sales over the counter may contribute to reducing drug-related mortality.

Late admission of patients who admitted to emergency services due to acetaminophen poisoning is related to higher levels of acetaminophen, higher hospitalization rates, and lower discharge rates. It is useful to apply more careful and concerned approach to the patients, especially if they apply late, and it will contribute to the treatment of patients.