Objective: To explore influences of icariin on Stromal-Derived Factor-1 (SDF-1) and CXC Chemokine Receptor 4 (CXCR-4) of rats with acute ischemic stroke and study on its protection function for nerve.

Methods: Healthy SD rats were selected, they were divided into the sham operation group (N group), model control group (M group), high and low icariin dosage group (T1 and T2), rats were given normal dieting for 24 h after model build, and intragastric administration, of which, N group and M group were given intragastric NS, rats in low dosage and high dosage group were given 30 mg/kg and 60 mg/kg icariin separately, once one day, last about 14 d, cutting off neck and sudden death. 3 rats were selected from M group, N group, T2 and T1 and given NSS. Rats in each group were given evaluation in 2 h, 1, 7 and 14 d’s after surgery and given PCR measurement according to evaluation results.

Conclusion: Icariin can promote neurological function recovery of rats after ischemia, its mechanism may have relations with icariin up-regulating SDF-1 and CXCR4.

Stroke is also cerebrovascular accident, which is a kind of nervous system disease with cerebral artery stenosis, obstruction and ruptures, also have characteristics of high incidence rate and high death rate [1,2]. Investigations show [3] the incidence rate and death rate of stroke in European and America countries place first rank in the world. Data show [4] that one in every nineteen people who have stroke. Incidence rate of stroke increases with the development of economy and population aging. In classification of stroke, ischemic stroke accounting for 80% in main incidence rate, which shows the study for ischemic is vital [5]. There are lots of studies which show [6-8] that occurrence and development of ischemic stroke is a process which relates to multiple pathological and physiological effects, the occurrence mechanism is still unclear completely. At present, clinical treatment mainly include vascular methods and cell methods. Vascular methods [9] mainly include thrombolysis, angiectasis and antiplatelet aggregation, but there are many adverse reactions, so there are many restricts on its clinical applications. Cell methods [10] are to block by neurological protection, but its selection of neuroprotective agents are stumbling block for inhibiting its promotion. Therefore, exploration of ischemic stroke has important meaning.

Stromalcell-Derived Factor-1 (SDF-1) is a kind of multiple subtypes small-inducible protein and secreted by matrix cell constantly. CXC Chemokine Receptor 4 (CXCR4) is only receptor of SDF-1 [11]. After combination of specificity of those two, this can cause changes of CXCR4 spatial conformation, making its secretion become abnormal. Therefore, different expressions of SDF-1 and CXCR4 during the process of neuronal differentiation can lead to neuron migration and neuronal circuit after cerebral tissue injury, so which play important effect on injured cerebral tissue recovery after cerebral infarction [12].

Therefore, Chinese herbs in treating ischemic stroke have significant meaning. Epimedium herb also can be called Herba Epimedii, is Berberidaceae epimedium L plant with nature of pungent, sweet and warm, which distribute to liver and kidney meridian and has functions of replenishing kidney-yang, strengthening bone and muscles, removing wind-dampness. It can be used to treat impotence, nocturnal emission, flaccid muscle and joint, rheumatic arthralgia, numbness and spasm, hypertension in menopause. Modern pharmacology study [13-15] show that Epimedium herb has functions of increasing cardiovascular circulation, promoting hematopoietic function, immunologic function and bone metabolism, anti-aging and anti-tumor. Icariin as one of pharmacological effective component in epimedium herb, which has inhibition and protection effects for resisting ischemic stroke. But there is no direct evidence for treating acute ischemic stroke by epimedium herb [16]. Therefore, this study tries to build rats ischemic stroke model through suture-occluded method which caused by Middle Cerebral Artery Occlusion (MCAO), observe icariin protection for this model. The test method is as follows: the water maze test is adopted to select eligible rate, which are fasted for 8 h before modeling and anaesthetized and abdominally injected with 10% chloral hydrate (35 mg/kg). Cut hairs in front of the neck, sterilize the side and medisect the skin, insensitively separate subcutaneous tissue, dissociate left internal carotid artery, cut a 0.12-0.14 cm (dia.) incision at the place where the left internal carotid artery is about 0.5 cm far from the nearly heart end, insert a 40 mm-long fishing stringer into the internal carotid artery for about 17-20 mm to pass the middle cerebral artery until arterial bleeding, fix the stringer onto the common carotid artery, ligate the nearly heart end, then sew the skin layer by layer, and reserve a bit of the end string at the incision sewing place for future re-perfusion. After MCAO modeling, carry out perfusion after 2 h, saying ischemic infarct has been completed in the range of middle cerebral artery, and then make the model again. With reference to Longa assessment method, modeling assessment should be carried out in 2 h after the animal revives. After it is assessed that modeling is successful, the rate can be used for next experiments; if it is assessed that modeling is unsuccessful, failure cause should be analysed and modeling remade again. Based on this, this study is to explore mechanism of its neurological function, which can provide pharmacology basis for studying effects of icariin on ischemic stroke in the future.

Clean grade male SD rats with 270 ± 20 g were provided by Animal Center of The Military Medical University. Certificate number: SCXK (Yu) 2007-0005. There were 4 rats in each cage. Rats eat and drink water by themselves. Backing was changed and rat cage cleaned regularly. They were raised for 7 d. The process of experiment follows animal management and protection principles.

The experiment was approved by the hospital ethics committee. This study selected clean grade male 40 rats to stay in experimental laboratory for one week. 30 MCAO of rats were selected randomly. Another 10 rats belonged to N group and used for building this model. Common carotid artery and external carotid artery were given vascular separation, exposure management only, not ligation and intraluminal suture insertion. 30 rats in preparation MCAO model group were randomly divided into three groups, namely low dosage group (T1 group, 10 rats), high dosage group (T2 group, 10 rats) and M group (10 rats). Normal diet rats for 24 h after model build were given intragastric administration, of which, M group and sham group given intragastric NS. Rats in low dosage and high dosage group given 30 mg/kg and 60 mg/kg separately once one day for 14 d. They were cut off, and then sudden death occurred. Before and after model build, we should pay attention to heat preservation, normal diet and give sterile operation during whole process of surgery.

3 rats were selected from M group, N group, T2 and T1 and given NSS. Rats in each group were given evaluation in 2 h, 1 d, 7 d and 14 d after surgery and given selection according to evaluation results. Evaluation scores as table 1. Rats scores below 4 were excluded from study of this group.

Abstraction of total RNA in tissue: Injury part and cerebral tissue of lateral ventricles of rats were selected, and given refrigeration under liquid nitrogen condition. Total RNA abstracted by using TRizol methods.

Reverse transcription of cDNA: cDNA compound agents were selected below sub-eighty degree celsius, thawed, 1ml RNA were abstracted, which formed cDNA by transcription. Then it had reaction according to reaction system of Table 2.

Prepared cDNA was given PCR amplification. Its PCR premier sequence and amplification sequence seen in Tables 3 and 4. DNA polymerization was detected by Real-time detection instrument after amplification, its reaction condition seen in Table 5. After 40 circles, they stopped automatically, then read template internal gene directly.

All data in experiment were input into Excel form to do statistics, used SPSS 17.0 software package to do analysis. Data was represented by x̄ ± s. This study used single factor variance analysis and LSD method to do variance analysis between two groups. P<0.05, there were statistical differences.

Whole cerebral region of sham operation group were color, which showed there were no infarction region; Left cerebral hemisphere of rats in high, low dosage group, model control group were white. White region was blood supply area of middle cerebral artery, which showed MCAO model was stable, reliable in this experiment (Figure 1). (A was model control group; B1 was high dosage group’ B2 was low dosage group; C was sham operation group). 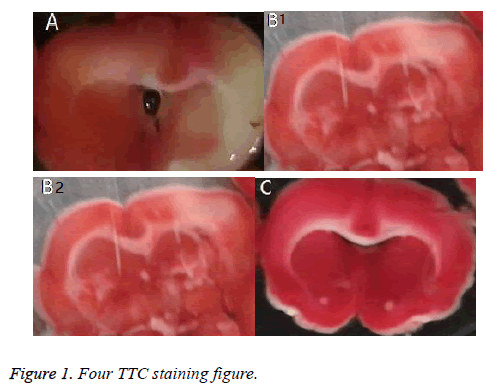 Neurological function impairment in model control group in 1 d after surgery reached to the extreme value, and then decreased gradually. The reason might relate with self-healing capability of rats itself. Neurological function scores in high dosage group compared with the model control group, there were statistical differences (P<0.05), compared with low dosage group, there were statistical differences (P<0.05, Table 6). This study selected low dosage group and control group to do next gene detection comparison according to this experiment results.

In recent years, incidence rate of ischemic stroke increases constantly. Therefore, ischemic stroke has become important project at home and abroad [17]. In the level of study for it, physiological and pathological mechanism of ischemic stroke is important research orientation of this field [18]. There are clinical results show that [19], the main pathogenesis of ischemic stroke is focal embolism of cerebral artery. Thread occlusion is the most common method at present. Its prepared MCAO model is close to clinical conditions, so this study selects this method to prepare acute ischemic rats model. In addition, in selection of rats model, SD rats have low variability comparing with vessels of Wstar rats, which more stable after model build. At the same time, female hormone can protect blood and vascular protective screen of rats, interfere results of this test, so this study select SD male rats to do test.

SDF-1 is a kind of sub-type small-inducible protein, which belongs to CXC chemokine family. But it compares with other sub-types, SDF-1 expression is wider and its function is subtle. From present study [20-24], CXCR4 and CXCR7 are the most two important receptors, and the specificity of CXCR4 is more strong, so which application on cell proliferation, migration and differentiation are more wide. But it combines with SDF-1 and CXCR4 specificity, its function can affect immune cells, brain, heart, kidney, liver, lung, growth of immune system, circulation system and central nervous system, which have relations with HIV infection and migration. Therefore, the study of SDF-1 and CXCR-4 on physiological and pathological mechanism is relatively important [25,26].

Modern pharmacology show that [27] ischemic stroke can cause neurological function disorder and its injury part will cause ischemia of periphery, so protection of vessels in neurological impairment part can relieve its injury to a certain extent, therefore, neurological function impairment is study hot topic at home and aboard in recent years. Now, study of cerebral injury mechanism under anoxia of SDF-1 and CXCR4 gain increasing attention. Through combination of SDF-1 and CXCR4, forming signal axis of those two, which play important role in the process of growth and development of biology [28]. Furthermore, this signal axis can regulate endogenous tissue in ischemic cerebral vessels prevention, and then has recovery effects. In addition, SDF-1/CXCR4 signal axis can regulate and control migration of neurological progenitor cell in the process of cerebral injury, so helping restore injury cerebral tissue [29-31]. This study focuses on study hot topic of function mechanism, explores the influences of icariin on two genes of SDF-1 and its receptor CXCR-4, mechanism of neurological vascular protection, which is also one of innovation in this study.

This experiment also has disadvantages. Detection of effective concentration still not reach to our ideal state because of limited experiment conditions and inadequate samples of animal model, at the same time, Yang-qi of rats are inadequate. This study has function of starting a discussion, which can lay a foundation for epimedium herb and vascular protection.