Objective: To investigate the influence of miR-363 on cell proliferation and migration of colorectal cancer.

Results: The expression of miR-363 in colorectal cancer cell lines and tissues were obviously up regulated (P<0.05). The cell proliferation and migration ability of colorectal cancer cell was inhibited after transfection of miR-363 mimics. Meanwhile, the expression of CTHRC1 in miR-363 mimics group was (0.31 ± 0.07), which was significantly lower than that in miR-363 inhibition group (2.46 ± 0.37).

Conclusion: miR-363 could inhibit the cell proliferation and migration ability of colorectal cancer cell and the possible mechanism is targeting on CTHRC1.

Colorectal cancer is one of the most common human tumors, the morbidity and mortality of which in the world rank top 3 and top 4, respectively. Moreover, the 5-year survival rate of patients was only about 50% [1]. The occurrence of colorectal cancer is a complex process controlled by multiple genes, and late colorectal cancer patients have poor sensitivity to chemotherapy with poor prognosis. MicroRNAs (miRNAs) are a class of non-coding single-stranded small RNAs of about 22 nucleotides that can inhibit the mRNA translation process by specifically promoting the degradation of certain mRNAs. Thus the regulation of certain target genes was realized, also participating in cell growth, differentiation and apoptosis [2]. At present, 500 kinds of miRNA have been found, of which nearly half of the tumor is closely related to the process [2]. Collagen triple helical repeat protein 1 (CTHRC1) is a secretory glycoprotein selected in the process of arterial injury, with the function of cell migration promotion and collagen deposition reduction [3]. In recent years, CTHRC1 has been found to be abnormally expressed in various solid tumors, and may be involved in the process of tumor invasion and metastasis. In this study, we examined the expression of miR-363 in colorectal cancer tissues and cells, and to investigate its effect on the proliferation and migration of colorectal cancer cells. Besides, bioinformatics software was employed to predict the target gene of miR-363, and its possible mechanism of action was discussed.

Total RNA was extracted from fresh frozen tissue and cell lines using RNAisoTM Plus according to the instructions, and CDNA was synthesized using PrimeScriptTM RT Master Mix. The PCR reaction was carried out with the fluorescent quantitative PCR kit and ABI 7500 PCR instrument in strict accordance with the kit instructions. The forward primer sequence of miR-363 was: 5'-CGAATGTCCGTCACATCT-3', and reverse primer sequence 5'-GTGCACGGGCAGAGGT-3'. The PCR conditions were 95°C for 10 min, 95°C for 15 s, 60°C for 60 s, respectively, with a total of 40 cycles. Then the amplication curve was plotted and 2-ΔΔCt analysis was performed (ΔCt for the cycle threshold). The target gene and the internal reference gene CT value were evaluated after comparison of the experimental group and the control group. In other words, ΔΔCt=ΔCt Colorectal cancer tissue -ΔCt normal tissue. All reactions were repeated for 3 times.

MiR-363 inhibitor, miR-363 inhibitor control were transfected into colorectal carcinoma HCT-116. After transfection 24 h, the cells were seeded in 96-well plates at 1 × 103 (200 μl) for 4 h, following which the cells were adherent. Then 100 μl of culture medium and 10 μl of CCK-8 were added. The cell was placed in CO2 cell incubator at 37°C. CCK-8 kit was used to detect the colorectal cancer cell proliferation ability at different time points (1 d, 2 d, 3 d, 4 d, 5 d), and the cell growth curve was drawn. The procedure was strictly in accordance with the CCK-8 kit instructions.

Colon cancer cells SW480 and SW620 in logarithmic growth phase were digested and made into single cell suspensions. The cells were seeded in a 6-well plate, adjusted to a cell density of 2.5 × 105 cells/ml with 1640 medium containing 10% fetal bovine serum. After 24 h, when the cell confluence rate reached 90% or more, the scratch test was performed to detect cell migration ability. Under normal microscope, the images of cell migration were observed and collected at 0 h, 24 h and 48 h after culture. The images were analysed and the mobility was calculated.

The total protein was extracted from the colorectal cancer cells after analysis, and the protein concentration was determined by BCA kit. 12% separation gel and 5% concentrated gel were prepared and loaded at a loading of 40 μg. The samples were transferred to PVDF membrane at 60 V and 100 V, and the PVDF membrane was placed in blocking solution for 1 h at room temperature. CTHRC antibody diluted at 1: 1000 was added and incubated overnight at 4°C. PVDF membrane was washed by TBST for 3 times, adding 1: 5000 washing membrane with peroxidase labeled secondary antibody. The PVDF membrane was incubated at room temperature for 1 h, and the coloration was realized after the X-ray film photosensitive, development and fixing. At last, Quantity One software was used for image analysis.

Data were processed by SPSS19.0 statistical software analysis, and all data were represented as mean ± standard deviation (x ± s). Differences between groups were compared using t test or variance analysis. The difference was statistically significant when P<0.05. The miR-363 target gene was predicted by software TargetScan and miRanda.

Expression of miR-363 in colorectal cancer tissues and cell lines 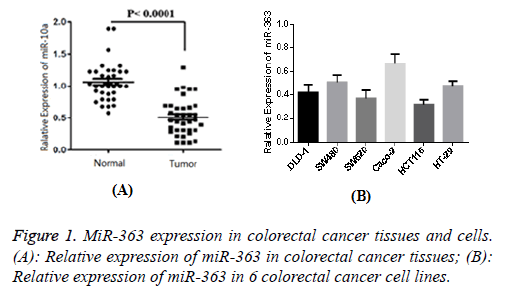 MiRNA is a non-coding RNA of about 22 nt in length. By silencing specific genes, miRNAs can degrade certain mRNAs and thereby inhibit the synthesis of specific proteins. Thus, miRNAs regulated gene expression levels at the transcriptional level [4]. Studies have confirmed that miRNA can affect a variety of physiological and pathological process, such as regulation of cell proliferation and apoptosis. In recent years, the roles of miRNAs in tumorigenesis have attracted increasing attention. Moreover, certain miRNAs were directly involved in the formation of human tumors. Tumor progression was a complex process involving multiple gene regulation and multiple steps, where miRNA expression played an important role. However, the molecular mechanism of the regulation of miRNAs was still unclear.

MiR-363 was a new type of small RNA discovered in recent years. As a member of the miRNA family, it participates in the development and progression of some tumors. MiR-363 was first identified in head and neck tumors with lymph node metastases. It was also down-regulated in some highly invasive tumor cell lines. Further studies have shown that miR-363 can affect the invasion and migration of tumor cells by targeting the PDPN protein [1,5]. Li et al. have shown that miR-363 can regulate the development of neuroblastoma and the process of metastasis [6]. According to the different tumor tissue,miR-363 expression level and its function varied. Sun et al. found that miR-363 had significantly different expression in renal cell carcinoma, gastric cancer, colorectal cancer, head and neck tumor and neuroblastoma tumor tissue [7]. Other studies have shown that miR-363 was related to clinical stage and lymph node metastasis of colorectal cancer patients [8]. However, its specific function was rare reported.

In summary, miR-363 was lowly expressed in colorectal cancer tissues and cell lines. Therefore, overexpression of miR-363 inhibited the proliferation of colon cancer cells and the migration of tumor cells. Hence, miR-363 may be a potential therapeutic target and diagnostic marker for colorectal cancer.