The influence of denervation on limb growth

Complete experimental brachial plexus neurectomy was performed in twenty four, 2-3 days old newly born rabbits. Clinical, radiological, macroscopic, electron-microscopic histopa-thological changes in the muscle and periosteum as well as changes in length and thickness of the long bones were recorded 3, 6 and 12 months postoperatively. The data indicated slight reduction in length of the denervated long bones by 2.6% and con-siderable reduction of the thickness by 15% in the first 6 months of age. The initial growth retardation did not show compensation 12 months post operatively. The histopathological findings indicated signs of degeneration in the denervated muscles. The periosteum showed abundant vascularity with intact nerve fibers accompanying the perio-steal blood vessels originating from the intact autonomic nervous system. These nerves fi-bers played an important role in regulating the bone blood flow.

The exact role of normal innervations on bone growth and fracture healing is controversial and incompletely understood [1,2,3]. Difficulties still exist in understanding the pathogenesis of idiopathic deformities, congenital leg length discrepancy and the hemiatrophies. Some research data suggest that faulty peripheral nerve trophic function might be the cause of limb growth retardation and hence anomalies [4,5,6,7,8,9].. Some studies found no effect of denervation on limb growth [10,11,12]. Others demonstrated a decrease in limb size and retardation of it’s growth after denervation [13,14,15,16] .Many of these reports were conducted on animals before limb tissues differentiation [11,14,15,16]. Others were conducted on animals near maturation [10,12] or on small numbers of animals[12,13]. Moreover, Dietz demonstrated significant effects on bone and foot growth after complete and partial sciatic denervation of Rana pipiens tadpoles. These effects included decreased bone length, cross-sectional area and foot size, however the cortical thickness was not affected [17].

The effect of complete brachial plexus neurectomy on skeletal muscles and bone growth in newly born rabbits is investigated in this study. The aim was to find out the macroscopic and microscopic effect of denervation at early phase of life on limb growth and differentiation and to understand the relationship between limb denervation and the occurrence of various types of congenital and acquired limb anomalies.

All animal procedures were approved by the Animal Care and Use Committee of The College of Medicine Animal Laboratory at King Saud University. The study was carried out on 24 newly born rabbits, the offspring of four clinically healthy New Zealand adult rabbits. They were under clinical observation during the study period of twelve months. Experimental neurectomy of the brachial plexus of the right forelimbs was performed in all of the 24 newly born 2-3 days old rabbits. The animals were anaesthetized with the open method of inhalation anesthesia, using diethyl ether. Each animal was placed on its dorsal aspect and the right forelimb was abducted. The ventral roots of the spinal nerves forming the brachial plexus were approached through 2-3 centimeter craniocaudal, longitudinal incision in the axilla.

The anterior nerve roots forming the brachial plexus were approached. Each root was tied with 7-0 silk sutures at two places with 2 centimeters gap. The nerve was then severed between the sutures and each cut end was reflected and embedded into the muscle masses proximally and distally. The skin was closed by Dexon 4/0 and the wound was covered. The denervated limbs had clinical evidence of loss of sensation and paralysis immediately following denervation. Soft tissues wasting and atrophy were assessed clinically. Bone thickness and length were measured by caliper.

The rabbits were kept with their mothers and divided into three equal groups of eight. The clinical findings were recorded and the left forelimbs were used as control. The three groups were sacrificed at the age of 3, 6, and 12 months. The two forelimbs for each rabbit were tested for the following:.

3. The electron microscopic changes of the skele-tal muscles and periosteum obtained from both forelimbs.

The specimens were processed and fixed in 2.5% glutaraldehyde solution for 24 hours and postfixed in 1% osmium for 6 hours. The pieces were dehydrated in ascending grades of ethanol and embedded in araldite. Ultra thin sections were obtained using a Reichert- Jang Ultramicrotome. The sections were stained with uranyl acetate and lead citrate. The stained sections were examined in a Japan Electronic Optical Lab (Jeol)-100 x electron microscope.

The two humeri of both forelimbs were freed from their musculature attachment and measured in length and mid shaft thickness using a caliper of 0.05 mm accuracy.

Statistical analysis were carried out using a two-tailed ttest using BMDP statistical software and the result was considered statistically significant if P<0.05.

All the rabbits survived the surgery and the study period. The denervated right forelimbs have shown complete absence of sensation and were paralyzed. Muscular atrophy was prominent. The proximal joints were stiff and extended, while the phalangeal joints were stiff in flexion. 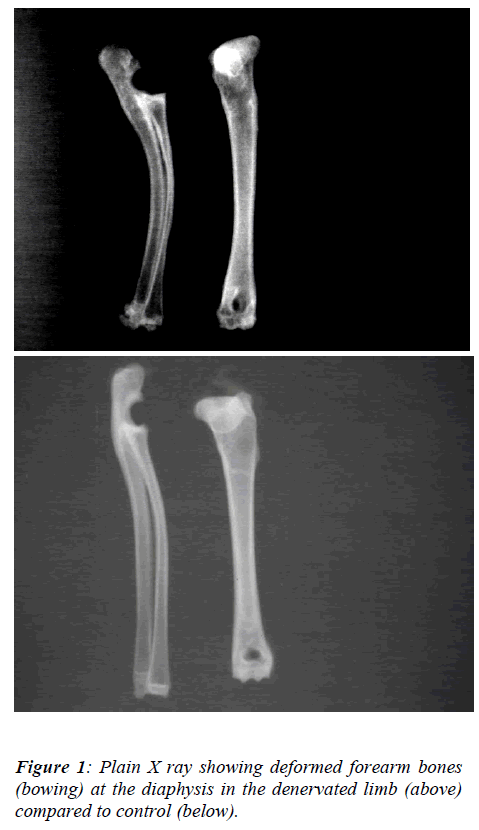 Figure 1: Plain X ray showing deformed forearm bones (bowing) at the diaphysis in the denervated limb (above) compared to control (below). 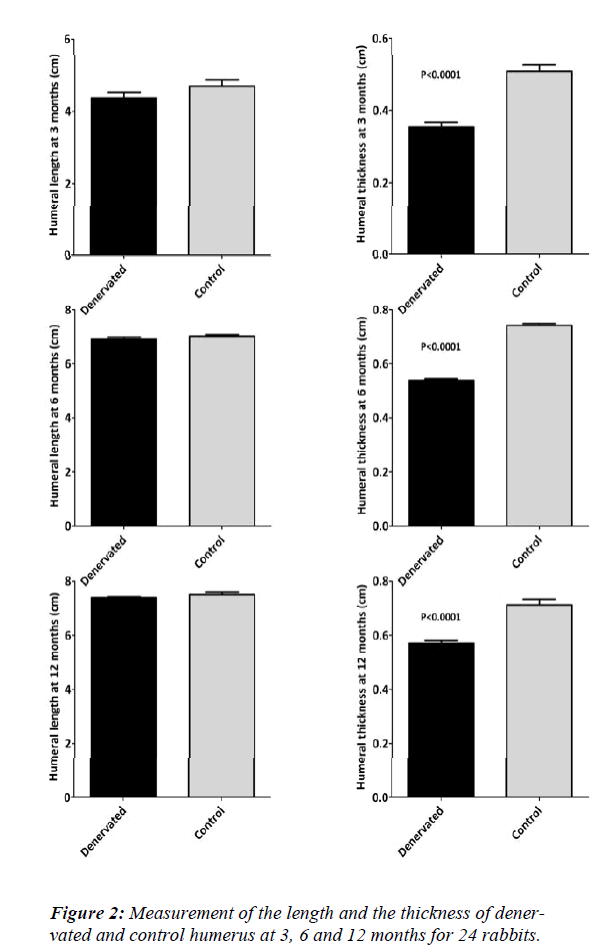 Figure 2: Measurement of the length and the thickness of denervated and control humerus at 3, 6 and 12 months for 24 rabbits.

The denervated skeletal muscle fibers exhibit alternate arrangement of A and I bands. In the middle of the I-band, electron dense Z lines are prominent. Multiple nuclei are peripheral and they are somewhat spindle-shaped. The nucleoli are of moderate density and the chromatin is scattered throughout the neucleoplasm.

However, three months following denervation, the tested limbs have shown significant changes in the skeletal muscle and the periosteum. In almost all the denervated skeletal muscles, the nerves have disappeared except a few (Fig 3). In some survived nerves myelenation could be noted. The survived nerves showed sign of degeneration. The mitochondria did not show any appreciable changes in their gross shape, but in all, the cristae were totally lost (Fig 4). Interestingly, severe remarkable changes were noted in the nucleous. The nucleii have shown significant indentation (Fig 5). The nucleolus has become more electrons dense and the chromatic material aggregated in big lumps mostly close to the nuclear membrane. In some cases, branching pattern of myofibrils could be noted (Fig 6). 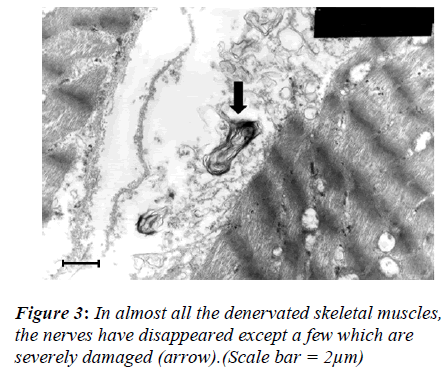 Figure 3: In almost all the denervated skeletal muscles, the nerves have disappeared except a few which are severely damaged (arrow).(Scale bar = 2µm). 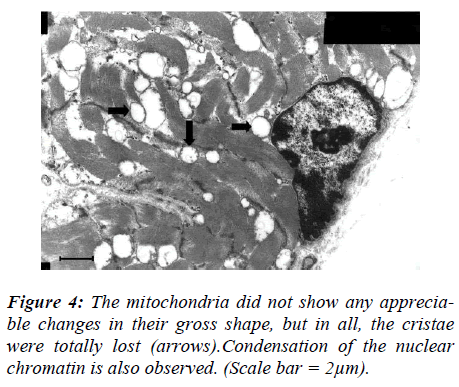 Figure 4: The mitochondria did not show any apprecia-ble changes in their gross shape, but in all, the cristae were totally lost (arrows).Condensation of the nuclear chromatin is also observed. (Scale bar = 2µm). 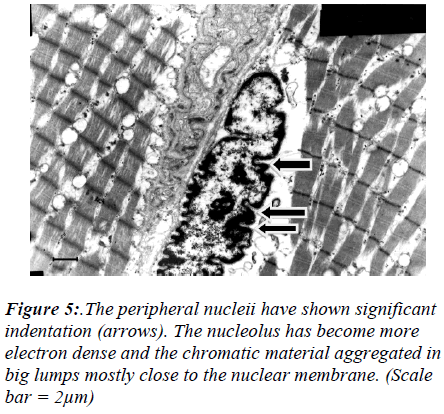 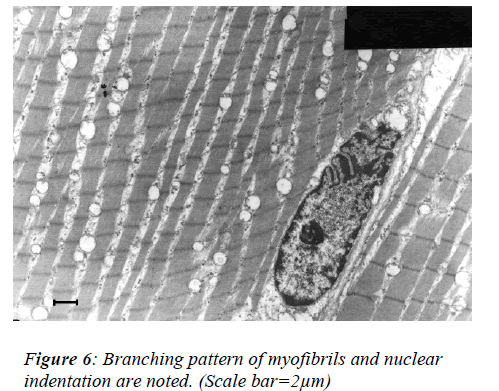 The periosteum showed rich vascularization and distribu-tion of collagen fibers. In no case, nerves could be seen in the periosteum. However, nerves accompanying the vessels were not affected.

This study was designed to explore the role of absent normal innervations on limbs growth. Difficulties still exist in understanding the pathogenesis of idiopathic deformities, congenital leg length discrepancy and the hemiatrophies.

The performed denervation operation was a reliable method to achieve permanent brachial plexus neurectomy on the right forelimb which was proved clinically, macroscopically, radiologically and histopathologically.

The study demonstrated that limb growth following experimental complete denervation of the brachial plexus was affected. There was significant reduction in width and slight reduction in length of bones in comparison to the normal innervated bones. The data suggested a slowed rate of development in denervated bones. These results are in agreement with many investigators [13, 14,15,16,17]. In contrast, others [10,11,12] concluded that denervation has no effect on longitudinal bone growth in limbs. However, in all these experiments femora and tibiae have been measured following sciatic nerve paralysis. The growth of these bones is influenced by the femoral and the obturator nerves beside the sciatic nerves. Therefore, the more motor roots of the spinal cord that were affected the greater was the affection of the bone and limb growth. This study proved that the initial growth retardation of denervated bone will not undergo compensation with time as long as the limb remains denervated.

Ring studied the influence of the nervous system upon limb growth using 6 to 8 week old rabbits and observed epiphyseal atrophy but no effect on bone growth at the denervated side [12] . However, the animals used were near maturity. Several studies demonstrated that the skeletal muscles responses to denervation in young and adult animals activate varieties of embryonic and fetal gene responses during the first few days of denervation. This is followed by a period of rapid muscle atrophy which is more prominent in young animals [18,19,20,21,22,23,24] . Shim et al showed an increase of more than 45% of blood flow to the foot at 8 and 15 days after sciatic denervation in rabbits [25] . Goetz et al suggested that increased blood supply stimulates longitudinal bone growth [26] , which is not the case in this study. This suggests that not only sufficient blood supply but also normal bone innervations are essential prerequisite for normal and balanced limb growth. Paralysis reduces skeletal growth by reducing both the movements and the loads imposed on the bones by muscle contraction and tone, changes that represent alterations in the mechanical environment of the skeleton. Paralyzed limbs have less loading and this could contribute to the affection of bone growth [3,27] .

In this work, electron microscopic studies manifested skeletal muscles degenerative changes with few intact autonomic nerve fibers present in the muscles accompanying the blood vessels. The demonstrated branching pattern of myofibrils which is not normally seen in the skeletal muscle fibers and only normally seen in the cardiac muscles is considered to be a very interesting finding and could be attributed to the denervation at a very early phase of life and need further investigation.

The complete absence of nerves in the periosteum is due to complete denervation. However, the intact nerve fibers accompanying the rich periosteal blood vessels are an indication of intact sympathetic fibers. These autonomic fibers could have been passed from ventral roots to the sympathetic ganglions bypassing the transected nerve roots. These nerves could have regulatory effect on blood flow of the limbs [4,5,6,7,9]. This experiment demonstrated a trophic effect of denervation on bone growth and limb development. The mechanism of this action is unknown but the data suggests a slowed rate of maturation in denervated bones. The possibility exists that defective peripheral nerve-limb tissue interactions may cause human deformities such as idiopathic clubfoot and idiopathic limb deformity and length discrepancy [4,5,6.7,9].

In conclusion, normal motor and sensory nerve inputs are essential factors in normal growth and well-being of the limbs. Deficient or altered limbs innervations could be an important factor causing deformity and shortening in congenital and acquired limbs pathologies. The electron microscopic finding of branching myofibrils in denervated skeletal muscle need further studies, exploration and explanation.