Objective: Mean platelet volume (MPV) level is known to increase in diabetes mellitus (DM), and prediabetes. In this study the first aim was to compare MPV levels of individuals with normal glucose tolerance (NGT) and individuals with prediabetes or DM. The second aim was to identify whether the initial lower limit value of impaired fasting glucose (IFG) being 100 mg/dl or 110 mg/dl had any impact on MPV values.

Methods: Five hundred and six individuals included in the study were divided into 7 groups according to oral glucose tolerance test results and their MPV values were examined. Group 1 was the NGT group. The IFG group was divided into two groups with one group having fasting plasma glucose (FPG) of 100-109 mg/dl and the other a FPG of 110-125 mg/dl. Group 4 was the impaired glucose tolerance (IGT) group. The IFG and IGT combination group was divided into two with a FPG of 100-109 mg/dl and a FPG of 110-125 mg/dl. Finally, group seven was the DM group.

Type 2 diabetes mellitus (DM) characterized by hyperglycemia is a worldwide, increasing, complex metabolic disorder, and associated with a twofold higher risk of cardiovascular disease [1]. DM may be diagnosed through fasting plasma glucose (FPG) or the 2-h plasma glucose (2 h PG) value after a 75 g oral glucose tolerance test (OGTT) [2]. Prediabetes is the term used for individuals with impaired fasting glucose (IFG) and/or impaired glucose tolerance (IGT) and indicates an increased risk for the future development of diabetes [2]. IGT is defined as an elevated plasma glucose level (≥ 140 mg/dl, but<200 mg/dl) 2 h PG after undergoing a 75 g OGTT in individuals with FPG level <100 mg/dl. IFG is defined differently by American Diabetes Association (ADA) and World Health Organization (WHO). IFG has been defined by ADA as FPG of 100-125 mg/dl with normal 2 h PG levels (<140 mg/dl) since 2006. WHO and European Diabetes Epidemiology Group (EDEG) defined IFG as FPG of 110-125 mg/dl with normal 2 h PG levels [3].

Individuals with DM are known to have higher rates of cardiovascular disease (CVD) compared to healthy individuals. In addition, DM is risk equivalent of CVD [4]. It is known that individuals with IGT and IFG have a tendency to develop DM; the predicted cumulative 5-6 year incidence of development of type 2 diabetes for patients with either IGT or IFG is 20-34% [5]. It is estimated that nearly 60% of patients with type 2 DM had prediabetes 5 years before diagnosis [6]. IFG and IGT are linked with an increased risk of CVD and cause for early intervention [7,8]. The failure of return of 2 h PG to FPG during OGTT carries a higher risk of death from CVD and other causes compared to those whose 2 h-PG level is less than or equal to their FPG levels [9].

Platelets play an important role in the integrity of normal hemostasis. Larger platelets with higher mean platelet volume (MPV) are hemostatically more reactive and produce higher amounts of the prothrombotic factor thromboxane A2, increasing the propensity to thrombosis [10,11]. MPV is an indicator of platelet activation and increased MPV is an independent risk factor for thromboembolism [12]. Altered platelet morphology and function have been reported in patients with DM, and MPV was found to be significantly higher in diabetic patients [13,14]. They are likely to be associated with the pathological processes and increased risk of vascular disease seen in these patients [15]. Several studies have reported a positive association between MPV and FPG in IFG and in IGT [16,17]. ADA diagnostic criteria have been used for IFG and IGT in the studies conducted so far. ADA and WHO accept the values 100 mg/dl and 110 mg/dl respectively as the lower limit in the diagnosis of IFG. In this study the first aim is to compare MPV levels of individuals with normal glucose tolerance (NGT) and individuals with prediabetes or DM. This study was conducted as there were no studies examining the lower limit values separately for both IFG and IFG+IGT diagnosis. The second aim of this study is to investigate whether the initial value of lower limit of the relationship with MPV in IFG accompanied by OGTT is 100 mg/dl or 110 mg/dl.

• Use of a drug affecting platelet function (aspirin, ticlopidine, warfarin, or heparin),

• All individuals diagnosed with Diabetic Retinopathy (DR) and Diabetic Nephropathy (DN), and individuals with neuropathic symptoms were excluded from the study.

Eligible individuals underwent a comprehensive assessment including documentation of medical history, physical examination, and measurement of laboratory variables. Physical examination included systolic blood pressure and diastolic blood pressure measurement with subjects sitting after a 10 minute rest using sphygmomanometer. OGTT patients were divided into 7 groups (Table 1). While the study groups were formed, FPG in IFG was examined in two parts as 100-109 mg/d and 110-125 mg/dl in group 2 and 3 and also IFG and IGT combination groups in group 5 and 6. Finally, ophthalmological examinations for DR, and spot urine protein and creatine levels for DN were investigated in patients diagnosed with DM.

Data were expressed as mean-standard deviation. Statistical analyses were carried out using the SPSS software version 20.0 (SPSS Inc, Chicago, IL, USA). Data were tested for normal distribution using the Kolmogorov-Smirnov test. One-way analysis of variance was used to compare the clinical characteristics among the seven groups followed by the posthoc Tukey HSD test for continuous variables. The chi-square test was used to compare the categorical parameters. Pearson’s correlation coefficients were calculated to evaluate the relationships between MPV and several clinical variables (age, sex, total cholesterol, HDL cholesterol, LDL cholesterol and triglycerides). A P-value of <0.05 was considered statistically significant.

In addition, MPV values of group 5+6 consistent with ADA IFG+IGT association were significantly higher than the individuals with NGT (p<0.001). Finally, MPV values of group 7 who were diagnosed with DM accompanied by OGTT and had no microvascular complications of diabetes were significantly higher than individuals in the control group (p<0.001). When MPV values of other groups except the individuals with NGT were examined, no statistical difference was found (p>0.05). IFG, IGT, IFG+IGT and DM diagnosis concluded whether according to ADA or WHO were both had higher MPV levels compared to NGT (Figures 1 and 2). In individuals diagnosed with IGT, positive correlation was identified between MPV and 2 h-PG values (p<0.05, r=309) and HbA1c values (p<0.05, r=463). On the other hand, in individuals diagnosed with DM, positive correlation between MPV and FPG was found (p<0.05, r=171). No correlation existed among MPV and lipids, age and gender. 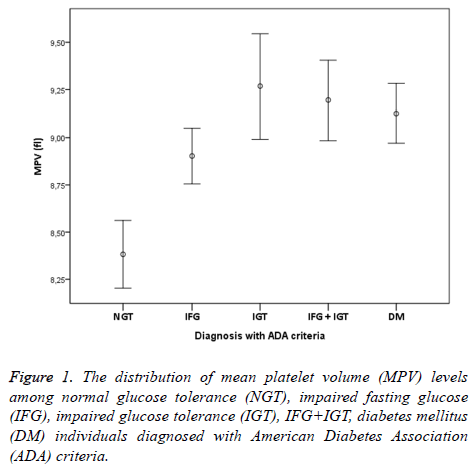 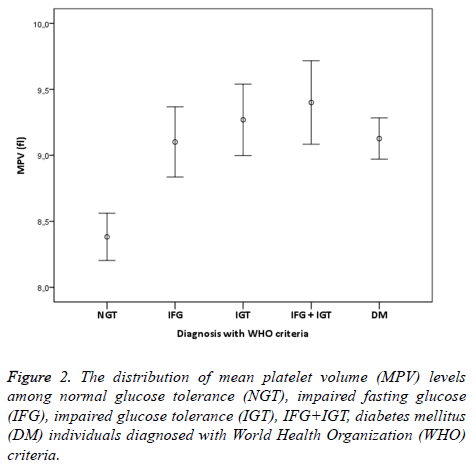 It is already known that the value of MPV is higher in patients with DM, IFG and IGT compare to NGT [16-19]. The lower limit of FPG has been used as ADA criteria in the studies conducted so far. In the current study, we found an increase in MPV levels compared to individuals with a NGT who did not fit WHO definition and had FPG levels of 100-109 mg/dl. Thus, it can be said that an increase in MPV occurs in individuals diagnosed with IFG in the early period compared to NGT. Shimodair et al. reported that MPV levels increased compared to NGT and correlation existed between MPV and FPG in individuals with IFG [20]. In addition, they stated that ADA criteria are more sensitive in the separation of prediabetic individuals from individuals with NGT than WHO and EDEG criteria, whose lower level of FPG is 110 mg/dl. However, no data were shared related to individuals having values lower or higher than 110 mg/dl [20]. Yet, in the studies conducted so far, IFG, IGT, and DM have usually been investigated separately and/or together. In our study, MPV values of individuals at all stages of glucose metabolism disorders including the initial diagnosis of prediabetes and type 2 DM, and MPV values of individuals with NGT were compared. Prediabetes consists of three sub-groups including IFG, IGT and IFG+IGT. In this study, it was found that MPV values were higher in all subgroups of prediabetes and DM compared to NGT. In the previous studies, it was discovered that MPV values increased in individuals with IFG [17,21,22]. Additionally, Çoban et al. identified an increase in MPV in individuals with IGT, which is similar to our results. [16]. It can be expected that MPV increase in combination with IFG+IGT might occur as both IFG and IGT increase. However, no study has revealed that kind of results. According to our review of literature, it can be said that our work is the first study investigating MPV levels in the IFG and IGT combination and also demonstrating an increase compared to individuals with NGT.

Increased platelet activity has an important role in the development of vascular complications in type 2 DM [23]. Hendra et al. showed that MPV was higher in patients with DM who had a history of acute myocardial infarction (AMI) when compared with the patients with DM who did not have a history of AMI [26]. MPV can be used as a favorable test in the monitoring of type 2 DM in terms of atherosclerosis development. In addition, MPV is known to increase in individuals suffering micro-macrovascular complications of DM [15]. In the current study, from the individuals diagnosed with DM after OGTT, the ones who did not suffer from microvascular complications were included, and MPV levels of these individuals were found to be high. These findings indicate that platelet function abnormalities may occur before the development of vascular complications in diabetic patients [24]. Therefore, as soon as individuals are diagnosed with Type 2 DM atherosclerosis development should immediately be monitored. MPV increase may occur in individuals who have microvascular complications of DM such as coronary artery disease, cerebrovascular disease and peripheral artery disease [27-29]. Increase in MPV is now emerging as an independent risk factor for thromboembolism, stroke and myocardial infarction [30,31]. MPV can be used as a simple economical test in the monitoring of DM and thereby it helps curbing the morbidity and mortality. In the case of the presence of high MPV levels in individuals with NGT, caution related to prediabetes or DM is advised. In addition, if high MPV level is detected in individuals with NGT, OGTT should be planned.

The present study had several limitations. First, MPV measurements from the blood samples taken from individuals were performed immediately (less than 30 minute). However, if sodium citrate had been added to the blood taken from individuals, the platelet swelling induced by EDTA could have been avoided. We believe that interaction with EDTA was minimal as blood samples were immediately examined. Second, our findings are based only on the Turkish population; different results might be observed in other ethnic groups. As a result, MPV levels increase in DM and all stages of prediabetes compared to individuals with NGT. As MPV level increases in individuals who have FPG levels lower than 110 mg/dl, those patients should be monitored closely in terms of DM and OGTT planning should be done in the early period.