The importance of obstetric(midwife) in breast cancer prevention and recurrence.

The role of the Obstetric is to act his/her activities according to the need of health with the aims of the prevention, the care, the safeguard and rehabilitation of the individual and the common health. The aim of this study was to evaluate the role of the obstetric in breast cancer prevention especially among young women not included in screening programs. An anonymous survey was distributed to consecutive 50 patients who underwent surgery for breast cancer and were followed at a Breast Cancer Department. The patients fulfilled the questionnaire immediately after the examination performed by both the oncologist and the obstetric. The survey focused on women’s perception on the potential role of midwife in breast cancer prevention and recurrence. Forty eight women fulfilled the survey (96.0%) and they declared they had a previous contact with a midwife in their life. Thirty-two patients (66.6%) believed that midwife’s role could include competences in breast cancer screening. Although only 16 women knew about self-examination at the time of cancer diagnosis, 24 patients were responsible of the detection of a suspected lump; finally, 28 patients (58.3%) believed that a clinical breast examination performed by a health care provider would have had a positive impact on their own history of disease. The results of this study confirm that midwives could be useful in breast cancer prevention. Collaboration between different professional figures including obstetrics for teaching and performing selfbreast examination may be particularly relevant in early diagnosis. Further investigation could confirm the role of obstetric for early diagnosis in young woman (<50 years) excluded by the current screening programs.

Although the remarkable biological acquisitions and therapeutic advances of the last 30-40 year shave significantly modified its prognosis, breast cancer still remains a leading cause of cancer morbidity and mortality in women.

The number of estimated new cases per year is about 296,620 in the United States including 2,190 cases in men, with an estimated mortality among U.S. population of 39,510 women [1]. Although breast cancer incidence rates seem to be stable among white American women, with a slightly increasing in African Americans [1,2], a survey on degenerative diseases performed by Hygiene and Health Permanent Committee of the Senate in 2011 has shown that breast cancer incidence is keeping to raise in our Country, with a global increasing of 13.8% and up to 28.6% in the 25- 44 age group.

The etiology of this tumor is usually considered multifactorial and many factors have been demonstrated to influence the individual risk of breast cancer development, such as menstrual and reproductive characteristics, familiarity, long-term hormonal therapies and lifestyle, including protecting factors, as daily vegetables consumption and aerobic physical activity, and risk factors, as high-fat diet and obesity, highly important especially in post-menopausal women [3-5].

Recently, the importance of modifying many of the aforementioned factors clearly emerges, thus enhancing healthy behaviors and encouraging various professional figures, including midwives, to play an important role in the prevention of breast cancer through the identification of subjects with a major risk of disease and the incentive to determine a positive change in their lifestyles.

Nowadays the most important screening program for breast cancer secondary prevention is represented by periodic execution of mammography possibly associated with clinical examination in all apparently healthy women aged between 50 and 69 years. Although the screening program allows the detection of the tumors in asymptomatic patients [6], still today diagnosis following an accidental discovery after patient’s self-examination is frequent. This clearly shows the importance of different professional figures cooperating in order to teach women the correct way to perform selfexamination and exploiting all the different moments while meeting women for various reasons (such as midwives for tampons and Pap test executions, for pregnancy, etc.) to perform breast and lymph nodes examinations.

The aim of this study was to analyze the possible role of midwife, a health care provider in contact with women, both in primary and secondary prevention, respectively reducing the risk of disease and achieving an early detection of the tumor with a more favorable prognosis [7].

This study included 50 consecutive patients previously radically resected for breast cancer, followed at the outpatient clinic Breast Cancer Department of our institution, between September and October 2015.

A survey drafted thought midwives and oncologists’ collaboration was administrating to the patients (Figure 1). The questionnaire included 9 questions, all closed-ended and multiple-choice except one referring to woman’s opinion about the potential role of midwife in the diagnosis of her own disease. The patients were also invited to add any eventual notes, suggestions or comments, which had not been included inside the previous answers. The questionnaire was anonymous and contained only some personal information including age and outpatient attending starting date. The local ethics committee approved this study. 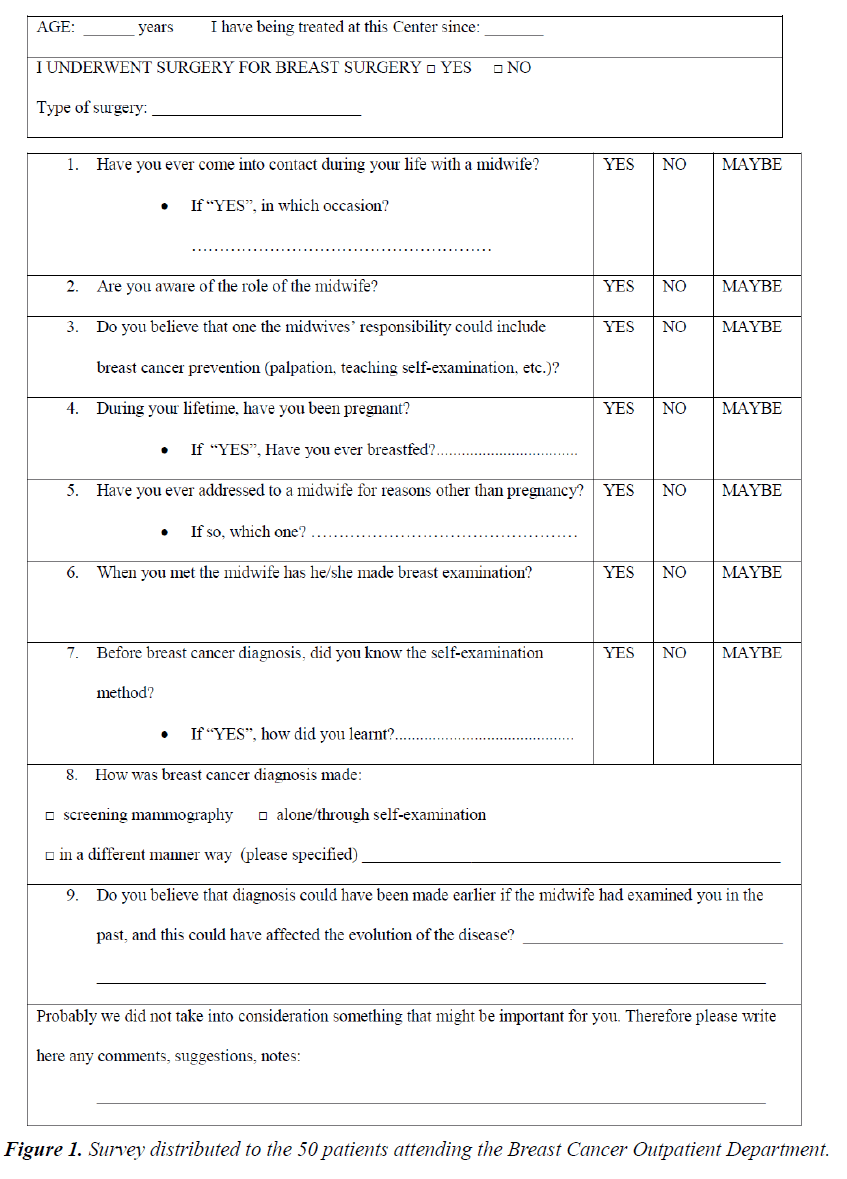 The survey was given to the patients attending the outpatient clinic Breast Cancer Department after both an oncologist and a midwife had examined them. The physician previously trained the obstetric about implementation of clinical breast and lymph nodes examination, laboratory tests and tumor markers interpretation. In addition to the clinical examination, both oncologist and midwife provided advices in the prevention of breast cancer. At the end of the visit they distributed the questionnaire to the patients asking them to fill in it.

Forty-eight out 50 women fulfilled the survey (96.0%), whilst 2 women (4.0%) refused to fill in the questionnaire. According to age, the patients spread in the following age groups:

Responding women declared they came in contact with a midwife in different situations (smears, swabs, pregnancy, child birth). Among the 48 interviewed women, 39 (81,2%) had at least one pregnancy and 27 (56,2%) had breastfed, so they met an obstetric in that specific occasion. Nevertheless, midwives had performed a complete breast examination in only 3 women out of 48 (6.2%).

Regardless of any previous contact with obstetrics, 38 patients (79.2%) reported to know midwives’ role and their skills even though they had not been trained by midwives and (65.9%) of these women believed that breast screening through performing breast examination, implementing selfpalpation and providing advices about lifestyle, represents a specific responsibility of this health care provider (Figure 2).

Sixteen patients (33,3%) were not aware of selfexamination’s method at the time of diagnosis (Figure 3), despite the high percentage of patients who did not know this method of breast palpation, as many as 25 of the 48 responding patients (52.1%) found the tumor alone accidentally. Conversely, the remaining 23 women discovered the neoplasm through imaging techniques, such as breast mammography within the screening programs (37%) or outside the screening programs (4.3%), breast ultrasound (2.2%) and the remaining 4,3% through other not well specified methods (Figure 4).

Among the 12 women with less or equal to 50 years at the time of diagnosis, who are not usually included in screening programs with mammography, 10 (83.3%) found the nodule with the self-examination. In the remaining two patients, cancer diagnosis was made throughout two different ways: with ultrasound in the first woman and during a gynecological examination in the second, respectively.

The last question dealt with the potential role of midwives in breast cancer diagnosis, through performing clinical examination and teaching the importance and the method of self-examination whenever obstetrics come into contact with women in various occasions maybe affecting the evolution of the disease.

Figure 3. Patients answers about their awareness of self-examination.

Figure 4. Patients answers about how their breast cancer diagnosis was performed.

Figure 5. Patients answers about the potential role of midwives in their breast cancer diagnosis.

The responses showed that 28 patients (58.3%) believed that a visit performed by a health care provider (including midwives) would surely have a positive impact on their disease potentially allowing an earlier diagnosis, while 11 women (23%) declared that it would not change the medical history for several reasons such as the presence of a small and/or not palpable neoplastic lesion. The remaining patients did not specify any answer (8.3%) or were not able to say midwives’ intervention would change anything or not (10.4%) (Figure 5).

Breast cancer still represents the leading cause of cancer death among women in Europe [1,8,9]. According to literature data, the results of our study confirmed that selfexamination, performed as a routine exam or more often in random situations, represents the primary method throughout tumor lesions are detected, especially among women under 50 years of age who are not usually included in screening programs and who are not frequently submitted to diagnostic imaging techniques [10-12]. Interestingly, in our study 16 out of the 48 responding patients were not aware of the selfexamination method.

Several published studies, especially investigating how social differences are able to affect woman's decision to carry out self-examination, have been conducted so far. These clinical trials have clearly shown that a periodic breast self-palpation is more often performed by married women compared to single one and in presence of a positive personal and/or family history of breast cancer. Cultural factors and educational attainment have also show a relevant role in the decision to perform self-examination [13-17].

Furthermore these studies have underlined the importance of nursing and other health care providers’ education and practice in teaching to women the method and the importance of self-examination. During their whole lives, women come into contact with the midwife for several reasons, therefore the training of health care providers, including midwives and nurses, becomes an indispensable moiety in their professional education allowing them to play an active role in breast cancer prevention. Hence, developing skills for lesions’ detection, teaching properly self-examination to women and providing advices about behavioral style to avoid, especially in women with high-risk of disease, could be implemented for midwives [18,19].

According to literature data [20-27], our study confirmed the potential role of obstetrics and other health care providers in the secondary prevention of breast cancer, also for women with a positive personal history of disease [28].

The multidisciplinary collaboration between professional figures would achieve a double benefit: first of all offering a further health service acting in synergy with those already available in order to obtain an early cancer diagnosis, and then increasing woman’s confidence with self-examination performed with knowledge and expertise.

Midwives would be of extreme support especially for young women who are not included in screening programs but instead meet the midwife for several reasons. In particular, they could give information about a correct breast examination to do early diagnosis and to improve knowledge about active screening programs.

The role of midwife in breast cancer primary and secondary prevention is still marginal despite the importance of this professional figure in the protection of women’s health heavily affirmed in the midwifery code of ethics [29]. An extension of our study may help to better define midwives’ role in breast cancer prevention.

This work was supported by University funding.