The importance of early diagnosis of subdural arteriovenous fistula for clinical recovery.....

Subdural arteriovenous fistulas (SDAVF) represent a rare disease of the spinal cord with diverse neurological complains resembling polyneuropathies of myelopathies. Due to the absence of specific clinical signs the diagnosis relies upon the MRI findings, which consists of the following classical triad of 1) dilated vessels in the subdural space, 2) central spinal cord edema and 3) contrast enhancement of the affected segments. A fourth yet inconsistent finding is an enlarged conus medullaris. The triad is however often incomplete and in the absence of the engorged perimedullary vessels the diagnosis can remains elusive for an extensive period of time and until an advanced level of clinical disability is reached. Unlike most other immune of infectious causes of medullary dysfunction, SDAVF is a treatable condition, surgical treatment usually stopping the progression of neurological complains. Therefore, an early diagnosis is the most important factor associated with neurological recovery. The aim of this case report is to illustrate how essential a prompt diagnosis is by presenting two patients with very different clinical outcomes based on the time from the initial complains to the correct diagnosis.

A subdural arteriovenous fistula (SDAVF) is a very rare disease of the spinal cord with a prevalence of 5-10/million per year. SDAVF’s are mostly localized in the lower thoracic segments (95%), whereas cervical or sacral localizations are very seldom and account for less than 5% of all cases [1,2].

The anatomical development of SDAVF’s is still debatable with post-mortem pathological studies suggesting it could represent a congenital anatomical variant which usually remains asymptomatic through adult life [2]. The process or causative factors which could lead to progression to neurological deficits remain unknown. However, older age (average 63.5 years) and male gender (78%) are identified risk factors associated with disease progression from an asymptomatic stage to clinical manifestations [1,2].

SDAVF is formed due to an abnormal connection between an radiculomeningeal artery and a radicular vein in the subdural space, directly leading to increased pressure in the subdural venous system. Following hindered blood drainage form the intramedullay capillary system, central spinal cord edema develops in the segments below the fistula as a result of venous hypertension [3-6].

The symptoms in SDAVFs are non-specific and range from mild sensory deficits to progressive para- or tetraplegia, depending on the localization of the fistula (Table 1). Early neurological exam may reveal as much as loss of sensation in the feet with or without discrete motor deficits. Deep tendon reflexes are often normal or discrete low or brisk, while plantar reflexes are not always pathologic. Therefore, the disease can initially easily pass for a sensory polyneuropathy, especially if essential radiologic signs are absent: typical engorged perimedullary of central medullary edema. Clinicians can rely on “alarm symptoms” which help in raising the suspicion of a SDAVF, namely frequent cauda syndrome symptoms otherwise not explained in the setting a polyneuropathy [4-7]. Studies show that as much as two third of patients with a SDAVF suffer to some extent from caudal dysfunction. However, many patients may be unaware of their bladder or bowel dysfunction or consider these symptoms not relevant for the neurology visit, therefore an extensive anamnesis and a complete neurological exam, including sacral reflexes and bladder function may be the only early sign guiding the diagnosis toward a SDAVF.

The average period between the onset of symptoms and diagnosis more than a year, with intervals ranging from a few weeks to 20 years after the first complains [7]. Diagnosis in a stage characterized by mild neurological deficits is therefore crucial since surgical treatment is curative, meaning that in most patients the disease progression is stopped or even reversed [5]. Unfortunately, studies show that SDAVFs are underdiagnosed or detected in an advanced stage of morbidity, leading to irreversible disability [1,2].

Patient A is a 60-year-old woman with since twenty years low back pain due to degenerative lumbar spine disease. The patient presented with progressive gait and sensory disturbances in the lower extremities to since a few months, initially overlooked due to the preexistent degenerative lumbar spine problem. The neurology exam showed bilateral hypesthesia of the legs under L1-L2 level on both sides accompanied by sensory disturbances the sacral dermatomes. Muscle strength was reduced in the lower extremities (MRC 4+). Deep tendon reflexes in both upper and lower extremities were brisk, with bilateral Babinski plantar reflexes and absent abdominal reflexes. There was a positive sign of L' Hermitte and the Lasègue test was negative on both sides. Patient had urinary retention and a reduced anal sphincter reflex.

Given the bilateral pyramidal and partial cauda equina syndrome spinal cord involvement is suspected (Table 2). The MRI showed increased signal in the cervical spinal cord on T2 images with central intramedullary contrast enhancement from C2 to C7. However, no dilated perimedullary vessels were seen in the subdural space. Blood and cerebrospinal fluid (CSF) examination was further normal. Based on these findings the patient was diagnosed with an autoimmune induced demyelinating myelitis transversa. She was treated with intravenous corticosteroid with little to no effect on the neurological complains and was further discharged to a neurorehabilitation center. After more than a year of relatively stable disease the patient developed tetraplegia and was admitted to the hospital where a new MRI was performed. Also at this advanced stage of clinical disability the MRI showed only increased cervical signal but no engorged veins in the subdural space. Based on high clinical suspicion of a SDAVF the patient was further referred to an academic center where serial angiographic imaging showed a fistula in the cervical region, which was immediately surgically treated [8]. However, due to an advanced level of disability at the moment of the diagnosis, only little improvement of the neurological deficits could be further obtain after surgery, with remaining severe handicap despite maximal physiotherapy rehabilitation.

Patient B is a 49-year-old man with no relevant medical history referred to the neurologist with progressive gait disturbances and numbness in both legs since 6 week. Patient accused feet cramps regularly and a tickling sensation starting in the lower back and hips going down to the legs when standing up. He described the sensation in his feet as if walking on cotton wool and had reduced motor control of the legs. He also suffered from constipation and has difficulty initiating micturition. The complaints had increased steadily over the course of a few weeks.

The additional blood test showed no other abnormalities. Based on the neurologic exam spinal cord pathology was suspected and an MRI was performed. The MRI showed increased central spinal signal at thoracic level between Th7 and Th11 with local contrast enhancement and engorged perimedullary, radiological triad consistent with a SDAVF (Figure 1). Patient was sent to a referral center for further surgical treatment. Surgery lead to complete resolution of clinical symptoms shortly thereafter. 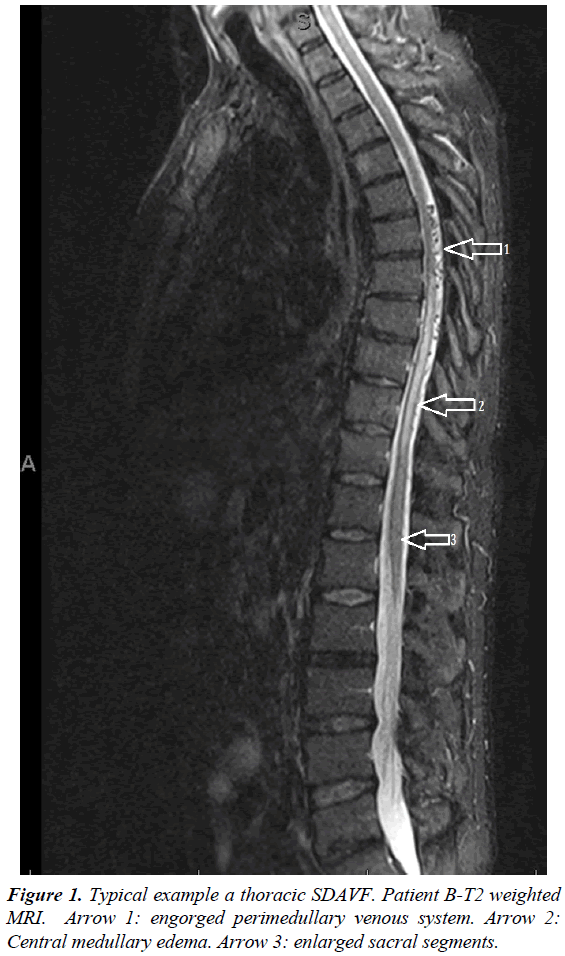 The two cased described above illustrate the utmost importance of an early diagnosis in patients with SDAVF. Followed diagnosis, surgical treatment is curative and is in most patients able to stop disease progression [1,2,5-7]. The remaining symptoms are therefore related to the severity before for the diagnosis, but most importantly to the duration of complains before surgery [2]. Since patient A was diagnosed more than two years after the onset of symptoms and in a stage of tetraplegia, her recovery was unfortunately only slight, leaving the patient with an advanced handicap. However, patient B was diagnosed and treated within weeks after the onset of complains and made a full recovery.

Discussed below are a series of clinical and radiologic features which can guide the treating physician toward the correct diagnosis in an early stage [4,6].

Based on clinical signs and symptoms

In the absence of pyramidal tract deficits, SDAVF could resemble in an early stage to a polyneuropathy, with gait disturbances and sensory deficits being most common initial symptoms [1,2,5-8]. These complains may remain mild for as long as years without progression to severe handicap. Patient A had a slowly progressive disease course with initially only sensory disturbances in the lower extremities, low deep tendon reflexes and normal plantar reflex, mimicking a sensory polyneuropathy. Nevertheless, the presence of cauda equina signs (urinary retention and a reduced anal sphincter reflex) should have indicated a spinal cord lesion. However, symptoms indicating sacral involvement can be easily overlooked especially if mild and relatively stable over a long period of time. Nevertheless, given that more than 60% to 70% of patients with SDAVF show involvement of sacral segments at the time of diagnosis, the association of polyneuropathy complains and caudal deficits should be considered as “red flag” for clinicians, raising suspicion for a SDAVF and conducting to further radiological diagnostic in order to exclude the diagnosis [8,9].

Based on radiology findings: It is important to keep in mind that SDAVF represents a radiology diagnosis. The typical radiology triad comprises of a combination of 1) central spinal cord edema with contrast enhancement, 2) engorged venous structures in the subdural space, and 3) thickening of the conus medullaris and cauda equina [4-9]. However, the central spinal cord edema may sometimes be the only radiology finding [4,6]. The differential diagnosis is therefore broad and starts with the exclusion of other causes: spinal tumors, infections, posttraumatic spinal cord pathology, degenerative disk disease, etc. (Table 2). If these causes are excluded and an immunemediated myelitis is considered, further imaging of the brain and blood and CSF may prove useful especially if multiple sclerosis is suspected [10-13]. A normal cell count and IgG index and negative oligoclonal bands in the CSF and clinical suspicion of a SDAVF should be sufficient reason to perform a serial spinal angiography, the diagnostic "gold standard" for SDAVF’s, as described is patient A [8].

SVADF is a potentially reversible disease when treated in an early stage, therefore it is essential to established the diagnosis as promptly as possible and when clinical complains are still mild. Because of the nonspecific character of the neurology exam and the extremely rare incidence of the disease, an early diagnosis remains a challenge for the treating neurologist. However, the combination of progressive gait disturbances, sensory deficits and cauda syndrome should raise suspicion of a SDAVF, even in the absence of typical engorged vessels in the subdural space on spinal cord MRI. Although not routinely performed, spinal cord angiography remains the diagnostic gold standard for SDAVFs and can show the exact location of the fistula. After surgical resection most patients achieve better functional status.