Objective: To investigate the effect of tamsulosin on urinary calculi formation and renal function in rats.

Urinary calculus is a worldwide common disease that occurs at each age stage, resulting in pain [1,2]. China is one of the three high-prevalence areas of calculus. Urinary calculi patients are ranked as the first populations who receive urinary surgery with increasing trend [3,4]. Following the increased incidence and recurrence rate, urinary calculus seriously threats to global health and social economy [5]. Multiple factors affect urinary calculi, such as environment, diet, lifestyle, genetic factors, gender, and metabolic abnormalities [6,7].

Melamine (Mel) is a kind of triazine nitrogen heterocyclic compound that can polymerize with other substances through hydrogen bond under vacuum or solution [8]. Mel can be discharged in urine directly without metabolism in the body [9]. However, Mel can damage kidney and form urinary calculus [10]. Urinary calculus is induced by complicated pathogenic factors, while discovering the medications that can influence urinary calculus formation is in favor of adjuvant therapy [11,12]. Tamsulosin is the most commonly used α- blocker for the medical treatment of ureteric stones because of its excellent tolerability and its uroselectivity for α1a and α1d, resulting in relaxation of the smooth muscles of the lower ureter, facilitation of stone passage, and relieving of pain [13,14]. Drug during episodes of ureteral colic, tamsulosin treatment can increase the stone expulsion rate and reduce the stone expulsion time, the need for hospitalization and endoscopic procedures, suggesting tamsulosin might be used in controlling colic pain [15].

Moreover, addition of tamsulosin to conventional treatment is beneficial in terms of clearance of lower ureteral stones and this effect was more evident for larger stones, especially when combined with shock wave lithotripsy [16]. Furthermore, tamsulosin alone as medical expulsive therapy for distal ureteral calculi has been demonstrated to have excellent expulsive effectiveness [17].

Rats were used for all experiments and all procedures were approved by the Animal Ethics Committee of 2nd Affiliated Hospital, Fujian Medical University.

Experimental animal grouping and urinary calculus modelling: The rats were randomly and equally divided into three groups with n=10 in each group. The rats in model group were feed by fodder with 3% Mel and normal drinking for 8 w [18]. The rats in tamsulosin group were treated with 0.1 mg/kg tamsulosin [19] via gavage once a day during modeling [20]. The experiment was in accordance with animal ethics.

Sample collection: After treatment, the blood was extracted from the aorta to the vaccum biochemistry tube using negative pressure acquisition method. After 30 min, blood was centrifuged at 3600 rpm at 4°C for 10 min. After that, the supernatant was stored at -20°C. The left renal tissue was obtained after sacrifice of the rats and stored at -80°C.

The urine was collected from the metabolism cage and stored at -20°C.

Urine Mel concentration detection: Urine Mel was tested by high performance liquid chromatography. A total of 0.15 ml sample was added to 5 ml trichloroacetic acid. Next, 5 ml ddH2O was added into the sample followed by filtration for detection. PhenomenexC8 was adopted. Heptane sulfonic acid sodium citrate buffer+acetonitrile (v/v, 90:10) was selected as mobile phase and the flow velocity was 112 ml/min. At last, a total of 10 μl sample was tested at 240 nm.

ELISA: ELISA was used to test TNF-α and IL-1β contents in the serum. A total of 50 μl diluted standard substance were added into each well to establish a standard curve. Next, 50 μl sample was added into the plate and washed for five times. Then the plate was incubated with 50 μl conjugate reagent at 37°C for 30 min. After washed for five times, 50 μl color agent A and B were added into the plate and incubated at 37°C for 30 min under dark. At last, 50 μl stop buffer was added to stop the reaction and the OD value at 450 nm was measured. The OD value of standard substance was used to prepare the linear regression equation, which was adopted to calculate the concentration of samples.

Real-time PCR: Total RNA was extracted from renal tissue by Trizol and reversely transcripted into cDNA. The primers were designed using Primer Premier 6.0 software and synthetized by Invitrogen (Table 1). Real-time PCR was performed with conditions as follows: 35 cycles of 92°C for 30 s, 58°C for 45 s, and 72°C for 35 s. GAPDH was selected as an internal reference. The relative expression of mRNA was calculated by 2-ΔCt method.

All data analyses were processed by SPSS19.0 software. All data were presented as mean ± Standard Deviation (SD) and compared by t-test or one-way ANOVA. P<0.05 was depicted as statistical significance.

Mel content was obviously elevated in the urine of rats from model group compared with that in control rats (P<0.05). However, tamsulosin treatment markedly declined Mel level compared with model group (P<0.05) (Figure 1). 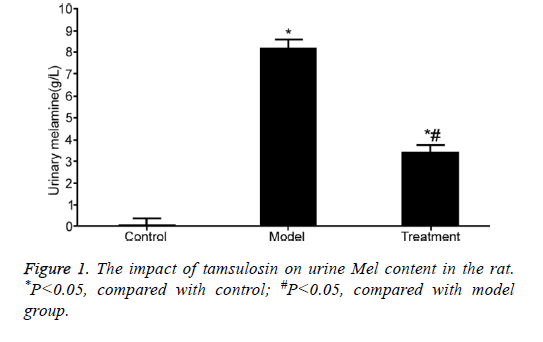 The impact of tamsulosin on caspase-3 activity 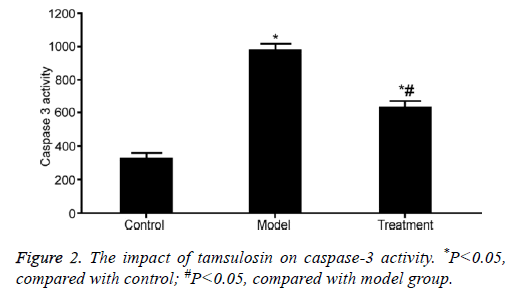 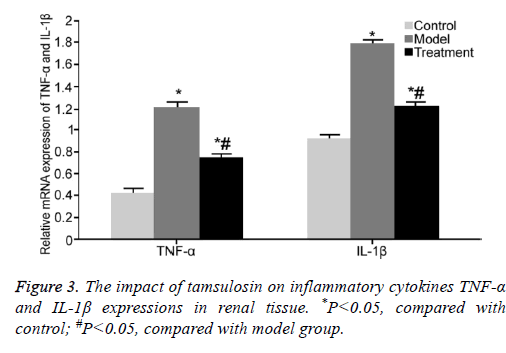 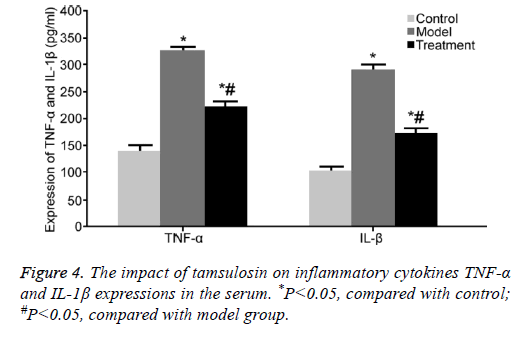 As a common disease in urinary surgery, the incidence of urinary calculus is gradually increased, while its specific pathogenic factors and mechanism remains poorly understood. Mel is easy to dissolve in acidic environment, whose solubility is higher than that in neutral or alkaline solution. In addition, it is slightly soluble in water [21]. Normal renal environment is acidity, thus in favor of Mel dissolution and self-assembly. Mel may form small molecular substance in the urine, especially acidic substance that delays the urethra to form urinary calculus [22]. On the other side, Mel can damage renal function. This study adopted 3% Mel to feed SD rat and obtained 90% urinary calculus formation rate. Moreover, Mel obviously increased 24 h urine volume, water intake, Scr, BUN, UAlb, and ratio of kidney to body weight, suggesting that Mel is one of the reasons to cause urinary calculus formation and renal damage.