The impact of ΔmtDNA4977 mutation on ulcerative colitis

Ulcerative colitis (UC) is an inflammatory bowel disorder characterized by continuous colonic mucosal inflammation that extends proximally from the rectum. The pathogenic mechanisms underlying UC remain unknown. Free-radical-elicited oxidative damage to macromolecules has been established as a contributory factor in UC. It is well known that the mitochondrial genome is more susceptible to increased oxidative damage than nuclear DNA. One of the best-described mtDNA mutations is the ΔmtDNA4977 (mtDNA 4977 bp) or common deletion. The aim of this study was to investigate the relationship between ΔmtDNA4977 and UC. We studied the ΔmtDNA4977 150 patients with UC (64 men, 86 women; mean age, 36.7 ± 11.6 years) and 250 disease-free controls (137 men, 113 women; mean age, 35 ± 12.1 years) in northern Iran. After DNA extraction from colon biopsies, gap polymerase chain reaction (Gap-PCR) was performed. The frequency of ΔmtDNA4977 was significantly different between the UC patients and the control group (78.7% vs. 16.8%, P<0.001). We found that ΔmtDNA4977 was more likely to be present in the patients of younger age (≤ 50 years, P=0.021). The mtDNA deletion was also significantly associated with the increased risk of an extensive form of colitis. Our study indicates that the ΔmtDNA4977 may play a role in the pathogenesis of UC. However, the findings need to be verified in large population-based prospective studies for more rigorous analyses of subgroups.

Ulcerative colitis (UC) is a chronic inflammation of the large intestine that, together with Crohn’s disease (CD), makes up the majority of inflammatory bowel diseases (IBD) [1]. The prevalence of UC is relatively static in northern Europe and North America, but it is rising in southern Europe and Asia [2]. The estimated prevalence of UC is 15 per 100000 persons in Iranian population [3]. Although the age of onset of UC typically occurs between the ages of 15-40 years, but the disease can occur at any age from infancy to the elderly. It was reported that almost 5% of new cases occur after age 60 [4]. Both sexes are equally affected.

The etiology of this disease is unknown, however, underlying genetic, environmental and lifestyle issues can affect an individual’s predisposition to this disease [5]. Genetic factors involved in the regulation of the immune system are thought to play a significant role in the pathogenesis of UC [6]. The activated genes involved in mucosal inflammation include cytokines IL-6, IL-8 IL-1β, IL-10, TNF-α and ICAM [7], and increased activation of NF-kB in human UC tissue, NOD2 and Vitamin D receptor [8-11]. Different gene polymorphisms such as CAT, IL-23 receptor and P53 have been shown to be related to UC [12-14].

The human mitochondrial genome comprises of a 16.5-kb circular double-stranded DNA molecule that encodes 13 polypeptides of the respiratory chain, 22 transfer RNAs, and two ribosomal RNAs required for protein synthesis [15]. Mitochondrion is the major source of reactive oxygen species (ROS). Oxidative stress has deleterious effects on cell membrane, DNA and mitochondria. The level of oxidative damage in mtDNA is about 10 to 20 times more rapid than the mutation rate in nucleic DNA (nDNA).

The most frequently reported mtDNA mutations are A3243G, found in patients with mitochondrial myopathy, encephalopathy, lactic acidosis, and stroke-like episodes (MELAS), A8344G in myoclonus epilepsy (MERRF), T8993G/C in neuropathy, ataxia and retinitis pigmentosa (NARP) and Leigh syndrome, large mtDNA deletion that causes Kearns- Sayre syndrome and ΔmtDNA4977 or common deletion. The position of ΔmtDNA4977 is 8483–13459 that embraces multiple structural genes (ATPase 6/8, COIII, ND3, ND4L and ND4) and six tRNA genes. Defects in the respiratory enzymes, the protein products of these fragments, can cause defect in ATP production [22].

Oxidative stress has been well documented in UC patients with increased ROS levels and decreased antioxidant levels in the inflamed mucosa, which ultimately contribute to chronic tissue damage [23]. UC exhibits deficiencies in antioxidant defences, probably because of excessive inflammation [24]. In this study, the relationship between ΔmtDNA4977and UC was investigated in northern Iran.

To trace the 4977 bp deletion, 150 patients with UC (64 males and 86 females) and 250 normal controls (137 males and 113 females) were included in this study. The diagnosis of UC was based on standard clinical and endoscopic and histopathologic findings. All the patients were from the North of Iran, and were recruited between July 2013 and April 2015. The location of the disease was defined according to the Montreal classification (E1, Ulcerative proctitis; E2, Left sided UC (distal UC); E3, pancolitis or Extensive UC) and the severity was classified as S0, S1, S2, S3 [25].

The control group composed of age- and gender-matched subjects who had undergone an endoscopic examination in the same recruitment period as the UC patients, without evidence of UC. Both the UC and control group samples were collected after obtaining informed consent. This study was conducted after review and approval of the ethics committee of Science and Research Branch, Azad University, Tehran, Iran. The present study was performed in accordance with the declaration of Helsinki (2013 revision).

For each patient, biopsy samples (50-100 mg) were obtained from inflamed mucosa during colonoscopy and collected in 2 ml tubes. Total DNA was extracted from each sample using GPP Solution Kit (Gene Pajoohan Pouya, Tehran, Iran), conventional proteinase K digestion and incubation at 55°C overnight. DNA purity and concentrations were determined by spectrophotometric measurement of the absorbance at 260 and 280 nm by UV spectrophotometer. The extracted DNA samples was placed into a 1.5 ml micro-centrifugal tube and stored at -80°C.

To detect the existence of mtDNA in DNA extracts and ΔmtDNA4977, two primer pairs were used (Cinnagen, Tehran, Iran). The mtDNA genotyping was performed as described previously [26]. The PCR reactions (25 μl) were performed in 0.2 μg DNA templates, 10 pmol of each of the forward and reverse primers, 1 × PCR buffer, 1.5 mmol/L MgCl2, 200 μM of each dNTP and 0.5 unites of Taq DNA polymerase (Fermentas, USA). The PCR conditions included an initial denaturation at 95°C for 5 min, then 35 cycles at 94°C for 30s (denaturation), 61.5°C for 1min (annealing), 72°C for 30 s (extension), and a final extension at 72°C for 10 min. After the reaction, 5 μl of PCR products was mixed with 2.5 μl of 6X loading buffer. The PCR products were electrophresed in 2% agarose gel and were visualized under UV illumination. A random of 20% of the sample was regenotyped by another laboratory member to improve the quality of genotyping and its validity and no discrepancy in analysis was found.

Statistical analysis was performed using the χ2 test and the MedCalc v.12.1 software (version 12.1, Belgium). Odds ratios (OR) were calculated together with their 95% confidence intervals (CI). A P-value <0.05 was considered to be statistically significant.

Table 1: Demographic and clinical features of UC patients and controls. 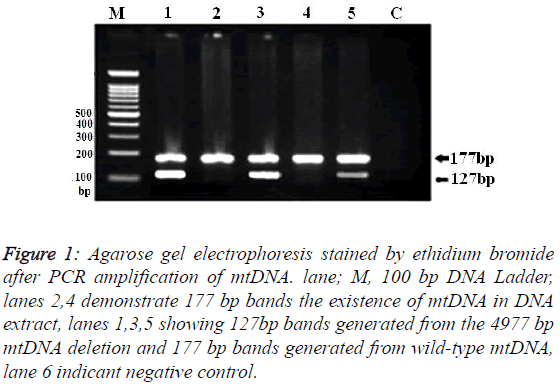 Band with length of 177-bp, confirmed the presence of the mtDNA in all extracts is that by amplification the highly conserved 12s region in mtDNA. Presence of 177-bp band and absence of 127-bp fragment was recorded as wild type mtDNA.

Table 2: Association of ΔmtDNA4977with extent and severity of UC.

We also found that, unlike the age-dependent accumulation that was expected, the ΔmtDNA4977was detected more frequently in large intestine of UC patients younger than 50 (44%) as compared to patients over 50 (31%) years. The number of mtDNA deletion was not influenced by the use of corticosteroids, sulfasalazine or azathioprine (P>0.05).

UC is a lifelong disease arising from an interaction between genetic and environmental factors, observed predominantly in the developed countries of the world [27]. Oxidative stress has been shown to be implicated in the patients with UC, with an increased production of ROS and decreased antioxidants levels in the inflamed mucosa, which ultimately contribute to chronic tissue damage [23].

Increased free radicals in the cell may lead to lipid and protein modifications, DNA damage, apoptosis or cancerogenic cell transformation [28]. ROS are also a major cause of mtDNA mutations, mtDNA mutations have been implicated in various human diseases including cancer and infections [29]. Among the mtDNA mutations, the ΔmtDNA4977 is one of the most frequent. While the number and types of mtDNA deletions vary greatly in different tissues and organs depending on age and the presence of distinct hereditary or acquired pathological conditions [30]. The ΔmtDNA4977was found to occur between two 13-bp direct repeats at positions 13,447-13,459 and 8,470-8,482 [31]. The genes or parts of the genes encoding for ATPase 8 and 6, COXIII, ND3, ND4 and ND4L and ND5 of the mtDNA removes, resulting in an impairment of the mitochondrial oxidative phosphorylation and ATP production [22].

In humans, the large bowel is a significant source of energy, the first source of energy in the form of ATP is oxidative phosphorylation. This process occurs in mitochondria in which mtDNA encodes for essential subunits of the respiratory chain. When mtDNA deletion occurs in cells, an increased oxidative stress may contribute to accumulation of the deleted mtDNA in colon tissue [30]. Moreover, the ΔmtDNA4977 could lead to energy production catastrophes and abnormal ROS generation.

To date few groups have studied the association of the mtDNA deletions with UC risk, but the results were inconsistent. Fukushima and Fiocchi demonstrated that mtDNA deletions are common in colonic epithelial cells (EC) of the human gastrointestinal tract. They also found that multiple types of mtDNA deletions occur in EC from normal and chronically inflamed colon and that both the type and abundance of mtDNA deletions selectively decrease in actively inflamed UC epithelium [32]. It has been shown that mitochondrial loss precedes the development of dysplasia, and it could be used to detect and potentially predict cancer [33]. The high incidence of mtDNA mutation in colorectal tissues of individuals with UC was shown. It was concluded that the rate of DNA mutation is enhanced in their mucosal cells by oxidative stress caused by chronic inflammation and, hence, malignant transformation occurs more easily than in normal subjects [15].

We also shown that the ΔmtDNA4977was more likely to be present in patients of younger age (≤ 50 years, p=0.027). In a similar study on colorectal cancer, it was shown that the frequency of ΔmtDNA4977of the tumor tissue in younger patients (less than 65 years) was more than older patients (over than 65 years) [34]. However, it has been shown that the ΔmtDNA4977 accumulated in tissues such as brain, skeletal and cardiac muscle increases with age [35]. We also found that the frequency of ΔmtDNA4977in extensive UC (47.3% of patients) is more than other groups (ulcerative proctitis, leftsided). The conflicting results of these reports may be due to the differences in sample sizes, and the impact of other genetic and environmental factors.

The present study has some limitations. First, this study was a single-centre investigation on a relatively small scale. Thus, replication studies with large independent cohorts are warranted. Second, we have analyzed only one mtDNA deletion and in future, exploring other genetic variations in the mtDNA would also be interesting.

It is concluded that ΔmtDNA4977 may play a role in the pathogenesis of UC. However, the findings need to be verified in large population-based prospective studies for more rigorous analyses of subgroups.

The authors wish to thank the all people in molecular Genetic Laboratory, Department of Biology, IAU, Tonekabon Branch, Islamic Azad University and Science and Research Branch, Tehran, Iran. We would like to thank Dr. Bahman Sajedi and all patients for their kind's assistance in the collection of samples. 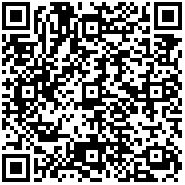