The extract of Lycium barbarum L. improves the behavior of rats with premature ovarian by regulating related genes

Objective: To explore the effect of Lycium barbarum L. on premature ovarian and the related mechanism.

Premature Ovarian Failure (POF) is the loss of ovarian function which is characterized by amenorrhea, hypoestrogenism, and elevated serum gonadotropin levels in women younger than the age of 40 [1]. The estimated incidence of POF is 1:10000 women by age 20; 1:1000 women by age 30; and 1:100 women by age 40 [2]. Women with POF experience menopausal symptoms such as hot flashes, vaginal dryness, dyspareunia, insomnia, vaginitis, and mood swings [3].

For thousands of years, Chinese Herbal Medicine (CHM) has been used to treat many diseases. Traditional Chinese Herbal Medicine (TCHM) contains multiple botanicals, each of which contains many compounds that may be relevant to the medicine's putative activity [4]. The philosophy of Chinese Medicine in terms of biology, pathophysiology and pharmacology takes an entirely different approach. Up to now, the diagnostic and therapeutic modalities rely on experience and social customs, and many treatments still do not have a concise mechanism of action and clear side effect profile [5]. Currently, CHM are mainly used to decrease the risk and treat common pathologies i.e. hypertension, hypercholesterolemia, diabetes mellitus, obesity, cancer, depression, prevention of miscarriages and even POF. Animal experiments have demonstrated the efficacy of Chinese herbs to inhibit the production of Anti-ovarian Antibodies (AoAb) and to further protect the ovaries from autoimmune destruction [6]. Studies have been done to reveal CHM’s influence on the serum level of hormones and its involvement with the Hypothalamic- Pituitary-Ovarian (HPO) axis [7]. CHM is also effective in the management of the infertility caused by POF [8].

Acousto-optical-electric stimulation (acousto-optical for 10 s, acousto-optical- electric for 60 s, and electrical stimulation for 5 s) was applied to prepare the model for 20 d, five times per day, at random intervals. Each process was completed within 1 h. Acousto, optical, and electrical stimuli used the following constant parameters: 1) sound intensity of 65 dB; 2) illumination intensity of 500 lux with shining and frequency of 1/s, 500 lux with lights on, and 300 lux with lights off; and 3) voltage of 24-36 V.

The medical material of Lycium barbarum L. was purchased from Medical Materials Company of Guangzhou City.

Drugs were administered at the same day post-modeling. Distilled water was given to rats in the control and model group, while drugs were given to corresponding experimental groups once per day for 25 d (drugs were given another continuous 5 d after stress stimulation for 20 d). Biological behaviours of rats in the five groups were observed. The weights of ovary and uterus were also determined.

The protein expression levels of E2, FSH and LH in serum were determined by Enzyme-Linked Immunosorbent Assay (ELISA) kits (Nanjing Jiancheng Bioengineering Institute, Nanjing, China). Serum of 100 g after frozen in liquid nitrogen or cell lines was put into homogenizer and 3 times the volume of normal saline was added for ice bath homogenate. The homogenate was centrifuged at 2000 rpm, 4°C for 20 min and the supernatant was collected. After incubated for 1 h at 37°C, the mixture were added with 100 μL streptavidin-Horse Radish Peroxidase (HRP) and incubated for another 30 min. Then, 100 μL stabilized chromogen was put with 100 μL stop buffer and the adsorption value of mixture at 450 nm was read and recorded.

Total RNA was extracted from cell lines using TRIzol method. Trizol of 1 ml was added and the solution was mixed homogeneously for 10 min. The mixture was then transferred into eppendorf tubes (EP, 1.5 ml) with 200 μL chloroform. After 15 min shaking, the EP tubes were centrifuged at 4°C for 15 min (12000X g). The supernate was transferred into other EP tubes and mixed with isopyknic isopropanol for 15 s. The centrifugation (4°C, 10 min, 12000 Xg) was carried out again and the supernate was discarded. The precipitate was washed by 75% ethonal twice and dissolved into 30 μL Diethypyrocarbonate (DEPC) after dried to obtain RNA stock solution. After isolation, the concentration of RNA was assessed using a NanoDrop 1000 spectrophotometer (NanoDrop Technologies, Wilmington, Delaware, USA) and the RAN solution was stored at -80°C for further use. Genes were amplified by specific oligonucleotide primer, and human Glyceraldehyde-3-Phosphate Dehydrogenase (GAPDH) gene was used as an endogenous control. The detection and quantification contained the following steps: first, reverse transcription was performed at 55°C for 30 min, initial activation for 15 min at 95°C, next 40 cycles of denaturation were conducted at 94°C for 15 s, then annealing for 30 s at 55°C, extension for 30 s at 72°C. The expression level was normalized using U6 small nuclear RNA by the 2-ΔCt method. The ΔCt values were normalized to GAPDH level. The sequence of primers are as follows: PLA2G4A: GTGCGACAGGAACCAGAAGC and CTCGGGCTTCTGGTTCCTGT, PAPPA: GGCTGTCAGAAGGCCAGATG and TGCCATGAAGGGATTTGAAGA, STC2: AATGGATCATCTCCACTATCACC and CTTACATGGGATTTGCATGACTT, CCL2: CAGCCAGATGCAATCAATGCC and TGGAATCCTGAACCCACTTCT, NELL1: GCTTTGGGATGGACCCTGAC and GAAATAAAAATGCTTTGCTGGC and GAPDH: GAGAGACCCTCACTGCTG and GATGGTACATGACAAGGTGC.

Cells were washed twice with ice-cold PBS and then lysed in RIPA buffer with protease and phosphatase inhibitors (Beyotime Biotechnology, China). Protein concentrations were determined using a BCA protein assay kit (KeyGen Biotech). Equivalent amounts of total proteins (40 μg) were loaded onto a 10% SDS-polyacrylamide gel and then transferred onto polyvinylidine difluoride membranes. The transferred membranes were blocked for 1 h in 5% nonfat milk and then incubated with the primary antibodies for MGC803, AGS, BGC823 and SGC7901 (Santa Cruz Biotechnology, SantaCruz, CA, USA) at 4°C overnight. Membranes were washed three times with TBSH for 10 min and incubated with horseradish peroxidase-coupled secondary antibodies for 2 h at room temperature. The immunoreactive bands were visualized using enhanced chemiluminescence with ECL reagents (Pierce, Rockford, IL). Each assay was repeated three times and β-actin protein level was used as a control for equal protein loading.

Data were processed using SPSS 19.0 statistical software (SPSS, Inc., Chicago, IL, USA) and recorded as the mean ± standard error of the mean. P<0.05 was considered to indicate a statistically significant difference. In addition, one-way analysis of variance was adopted to assess the data. All of the experiments were performed in triplicate for the purposes of comparison.

Rats in the POF model group had stiff and dull hair, exhibited behaviors of chasing and biting other rats, and did not undergo weight gain during the study period. In contrast, POF model rats treated with medium- and high-dose water and ethanol extractive from Lycium barbarum L. had neat and supple hair, exhibited more docile behaviors, and experienced the normal increase in weight during the study period. POF model rats treated with low-dose water and ethanol extractive from Lycium barbarum L. displayed characteristics and behaviors that were similar to those in the untreated POF model group, indicating that the low dose had no evident effect on POF symptoms. 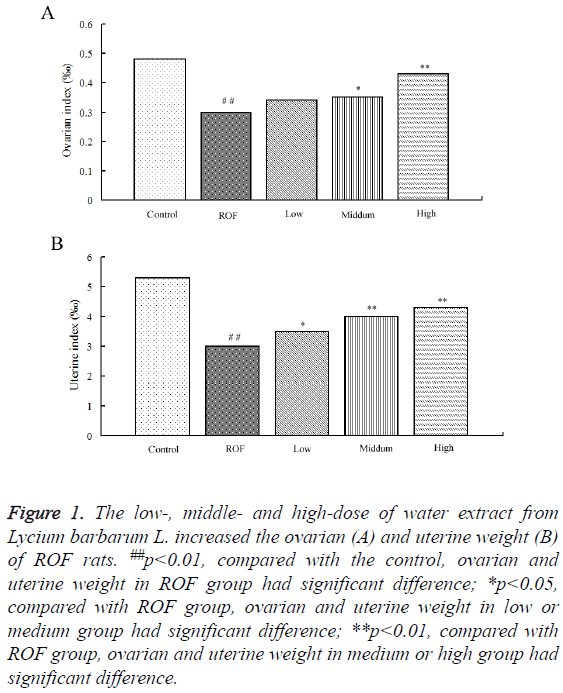 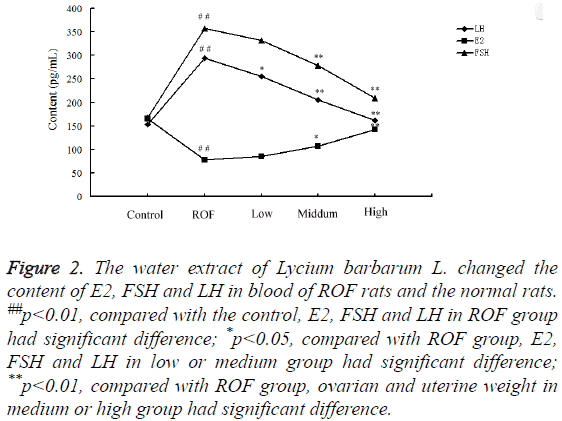 The content of PLA2G4A, PAPPA, STC2, CCL2 and NELL1 changes 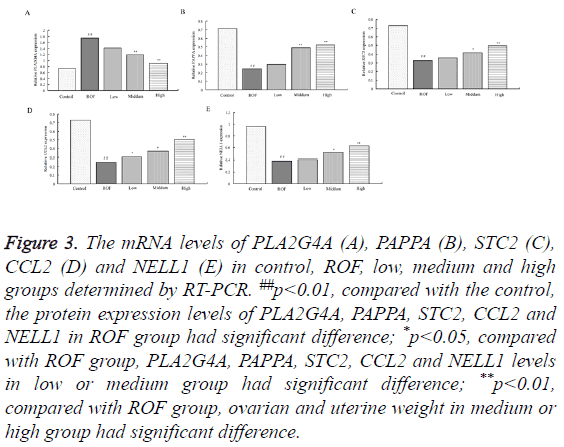 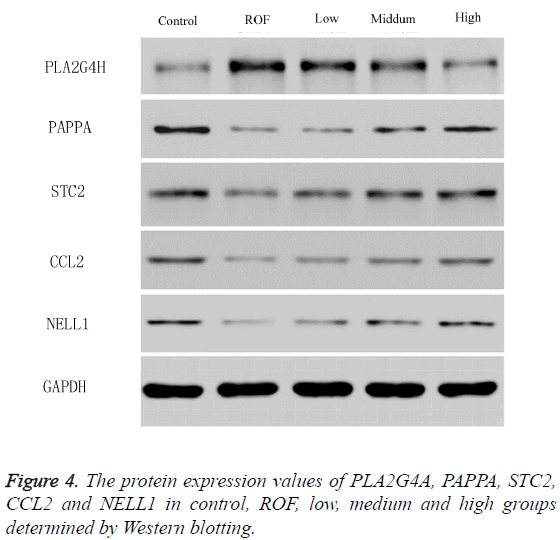 Premature Ovarian Failure (POF) is a primary ovarian defect characterized by absent menarche (primary amenorrhea) or premature depletion of ovarian follicles before the age of 40 years (secondary amenorrhea) [12]. It causes hypergonadotrophic hypogonadism occurs in 1% of women. In majority of cases the underlying cause is not identified. The known causes include: genetic aberrations, autoimmune ovarian damage, iatrogenic following surgical, radiotherapeutic or chemotherapeutic interventions as in malignancies and environmental factors like viral infections and toxins [13]. Chinese Herbal Medicines (CHM) is increasingly being used as an alternative treatment for many diseases. It is a common complementary therapy used by patients with cancer for reduction of chemotherapy-induced toxic effects [14]. Fruit from Lycium barbarum L. in the family Solanaceae is wellknown in traditional Chinese herbal medicine and nowadays has been widely used as a popular functional food, with a large variety of beneficial effects, such as reducing blood glucose and serum lipids, anti-aging [15-17]. Lycium barbarum fruits can be used to produce various types of healthy products and foods, e.g., medicinal beverages and drinks, and healthy dietary soups [18]. Some constituents of Lycium barbarum fruits have been chemically investigated, especially Lycium barbarum polysaccharide (LBP) components. Five polysaccharides (glycoconjugates) (LbGp1-LbGp5) were isolated and structurally elucidated [19]. Lycium barbarum polysaccharide had effects on antitumor activity and immune function [20].

The levels of ROF related gene E2, FSH, and LH in serum of rats in the control, ROF, low, medium and high groups were determined. Results showed high concentration of water extractive decreased the level of FSH and LH significantly. Follicle stimulating hormone (FSH) is a member of the glycoprotein hormone family that includes luteinizing hormone (LH), thyroid stimulating hormone, and chorionic gonadotropin [21]. Gonadal function is controlled by the two pituitary gonadotropins, LH and FSH [19]. While LH mainly regulates gonadal steroidogenesis, FSH is considered essential for folliculogenesis in the female and spermatogenesis in male. It stimulates in ovarian granulosa cells diverse, differentiationdependent responses that implicate activation of specific cellular signaling cascades [22]. Pituitary gonadotropins FSH and luteinizing hormone stimulate the gonads by regulating germ cell proliferation and differentiation [23]. The content of E2 in ROF model rats was markedly lower than that in the control. After treating with water extractive from Lycium barbarum L., the content was significantly increased. Afterwards, we determined the mRNA levels and protein expression values of PLA2G4A, PAPPA, STC2, CCL2 and NELL1 in ovary by RT-PCR and Western blotting. Results showed water extractive from Lycium barbarum L. increased the levels of PAPPA, STC2, CCL2 and NELL1, and decreased the level of PLA2G4A. Two polymorphisms of the PLA2G4A have been found in chromosome 1q25-the polyA polymorphism and the BanI polymorphism, which occur near the promoter region and near the first intron, respectively [24]. The human glycoprotein, stanniocalcin 2 (STC2) plays multiple roles in several tumor types [25]. STC-2 contains a cluster of histidine residues in the C-terminal portion of the protein. It was previously shown to decrease phosphate uptake into kidney cells in vitro [26]. It is previously known to be involved in the regulation of calcium and phosphate transport in the kidney and also reported to play multiple roles in several cancers [27]. CCL2 plays a key role in leukocyte migration and are potential targets in the treatment of chronic inflammatory disorders [28]. It has been demonstrated to recruit monocytes to tumor sites [29]. It promotes prostate cancer tumorigenesis and metastasis [30]. NELL1 is an extracellular protein inducing osteogenic differentiation and bone formation of osteoblastic cells [31]. It encodes cysteine-rich amino acid sequences including six epidermal growth factor-like motifs, which contain signal peptides at the N-terminals [32]. Therefore, we speculated water extractive from Lycium barbarum L. improved ROF by regulating ROF related gene FSH, E2, LH, PLA2G4A, PAPPA, STC2, CCL2 and NELL1.

The study was supported by fund of Pudong new area of TCM heir PDZYXK-6-2014025.