Caveolae are specialized domains of the plasma membrane that are implicated in the sequestration of a variety of lipid and protein molecules [1]. It has been suggested that these important cellular organelles play a pivotal role in biochemical processes such as lipid metabolism, growth regulation, signal transduction, and apoptosis [2]. Caveolin interacts with and regulates heterotrimeric G-proteins [1,2]. Currently, there are 3 members of the caveolin multi-gene family that encode 21-24 kDa integral membrane proteins that comprise the major structural component of the caveolar membrane [3]. Caveolin-2 (Cav2) is abundantly expressed in fibroblasts, differentiated adipocytes, smooth and skeletal muscles, and endothelial cells [4]. The expressions of Cav1 are similar to that of Cav2, whereas that of Cav3 are limited to the muscle tissues [5]. Cav1 regulates hepatic lipid accumulation, lipid and glucose metabolism, and hepatic proliferation [6]; however, the expressions and functions of Cav2 in the liver are unknown.

Natural antisense transcripts (NATs) are known as one of gene expression regulators in eukaryotes [7]. In the past several years, the expression of NATs in mammals is reported [8,9]. In addition, investigation that the differential expressions of several NATs are induced during the process of liver development is made [10]. Due to the increase in the number of these studies, researchers have initiated investigations of not only the expressions of mRNAs and NATs but also the localization and regulation of their transcripts to completely understand the molecular interactions occurring in individual loci, cells, and tissues. Changes in the level of expressions of each NAT have been described in complex diseases such as cancer and neurological [11,12]. Identification of Cav2 NATs as an up-regulated gene during liver development is done [10]. However, little is known about the expressions of Cav2 mRNAs and NATs during pre and postnatal development of the liver. Hence, in the present study, the possible existence of Cav2 NATs and the localization of Cav2 mRNAs and its NATs during the development of the liver is examined.

Livers at various developmental stages, embryonic stage (E) days 14, 17, and 19, new-born stage (NB), and 3-d-old stage (3D), were obtained from the C57BL/6J mice at the RIKEN BioResource Center (Tsukuba, Ibaraki, Japan). All animal experiments were carried out according to the RIKEN guidelines for the care and use of experimental animals. Livers at E14, E17, E19, NB, and 3D were collected (each n=3).

Total RNAs from the livers was isolated using Isogen II (Nippongene, Tokyo, Japan) according to the manufacturer’s instructions. The quality and concentration of the total RNAs were assessed using the NanoDrop spectrophotometer (NanoDrop Technologies, Wilmington, DE, USA) according to the manufacturer’s instructions. All the total RNA samples had 260/280 nm absorbance ratios of 1.8-2.0 [9]. To provide an external control for the comparison of results obtained from strand-specific reverse transcription-quantitative polymerase chain reaction (strand-specific RT-qPCR), an aliquot of each RNA sample was mixed with that of the RNA fragment synthesized from pEGFP-C1 vector (EGFP: enhanced green fluorescent protein; ThermoFisher Scientific, Inc.) to attain a final amount of 5 × 10-5 pmol/10 μg total RNA, and the resulting mixture was subjected to the synthesis of first-strand complimentary DNA (cDNA) [14].

C57BL/6J mice at different developmental stages (E14 and NB) were obtained from the RIKEN BioResource Center (Ibaraki, Japan). For in situ hybridization, tissues from mice at different developmental stages were first fixed in situ by perfusion with 4% (w/v) ice-cold paraformaldehyde solution in phosphate-buffered saline (PBS). The resulting tissues were excised and further fixed overnight in paraformaldehyde solution. The fixed tissues were embedded in paraffin and cut into 4-μm sections. These sections were placed on glass slides and subjected to hematoxylin and eosin (HE) staining and in situ hybridization. In situ hybridization was performed using the de-paraffinized sections of embryos as described above. Hybridization, washing and detection were performed by protocol reported previously [15]. 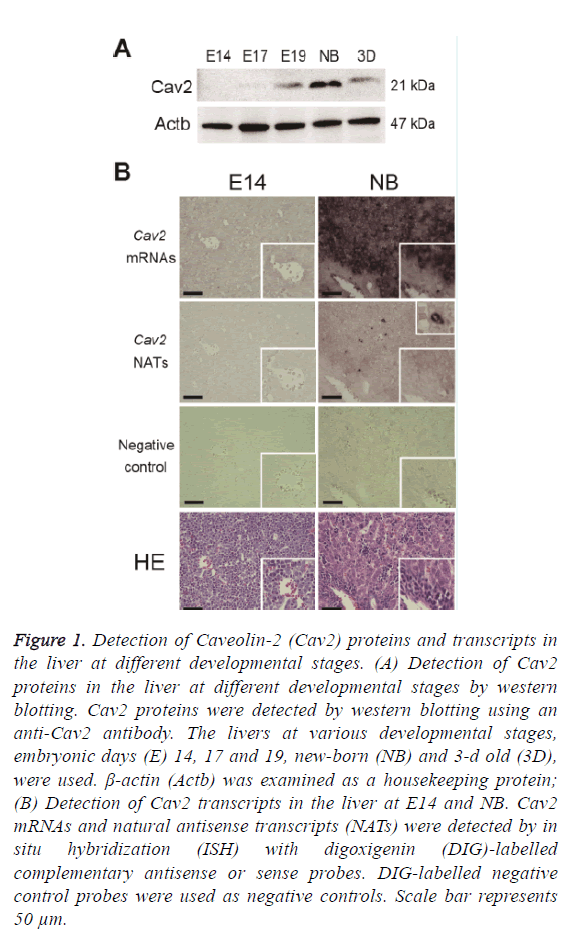 Figure 1: Detection of Caveolin-2 (Cav2) proteins and transcripts in the liver at different developmental stages. (A) Detection of Cav2 proteins in the liver at different developmental stages by western blotting. Cav2 proteins were detected by western blotting using an anti-Cav2 antibody. The livers at various developmental stages, embryonic days (E) 14, 17 and 19, new-born (NB) and 3-d old (3D), were used. β-actin (Actb) was examined as a housekeeping protein; (B) Detection of Cav2 transcripts in the liver at E14 and NB. Cav2 mRNAs and natural antisense transcripts (NATs) were detected by in situ hybridization (ISH) with digoxigenin (DIG)-labelled complementary antisense or sense probes. DIG-labelled negative control probes were used as negative controls. Scale bar represents 50 μm.

Table 1: Amounts of Cav2 mRNAs and NATs in the liver at different developmental stages.

In conclusion, the expressions of Cav2 NATs were lower than that of Cav2 mRNAs and were not co-localized with the Cav2 mRNAs. Therefore, Cav2 NATs may not regulate Cav2 mRNA expression. In future studies, the cells expressing Cav2 NATs should be identified to obtain novel information about these NATs.