The efficacy of nano-silver and silver sulfadiazine for degree II burn wound: a meta-analysis

The secondary infection, with a very high incidence, is one type of the most serious complications and the main causes of death in burn patients. Infections mostly occur in burn wound especially the deep degree II wound or deeper superficial degree II wound [1]. The occurrence of local vascular thrombosis and serious inflammatory response frequently lead to the inability of systemic administration of antibiotic for the local infection [2]. Therefore, the efficacy of the intravenous antibiotic alone to control bacterial reproduction in the burn wound is not satisfactory. Besides, long-term use of antibiotic is also easy to result in multi-drug resistance and superinfection, which will bring more difficulties to the treatment [3]. Early topical application of bactericidal or antibacterial agents is an effective measure which could effectively protect the burn wound from bacterial infection and ultimately promote the wound healing [4].

Silver-carrying antimicrobial preparation has been used for burn wound as an externally applied agent for several decades. Silver have synergy effect with sulfadiazine in inhibiting bacterial growth [5]. Silver sulfadiazine is one of the traditional silver formulations, which play an important role in inhibiting the molecular transport system, enhancing the stability of DNA and finally decreasing bacterial replication [5]. Besides, silver sulfadiazine exerts antimicrobial effects through destroying the molecular structure of bacteria and increasing the production of inactive and insoluble metabolites [6]. These metabolites further prevent bacterial infection, alleviate local inflammation reaction and ultimately promote wound healing [7]. Nano-silver surgical dressing, produced by attaching 25 nm silver ions to the cotton fiber, has potent antibacterial properties, even without the synergy effect with sulfadiazine. Silver ions are released slowly to combine with anion of the bacterial protein and finally lead to denaturation of bacterial protein [6]. Nano-silver has several advantages compared with silver sulfadiazine. Firstly, the nano-silver has a larger contact area compared with the conventional silver formulation, thus, the requisite amount of silver ions are greatly reduced for the equal amount of bacteria. It is of great significance to improve efficacy and safety of silver therapies. Secondly, nano-silver dressing has the superior permeability and is of advantageous for the drainage of wound, which significantly reduces the risk of infection caused by subcutaneous effusion [7]. Thirdly, the nano-silver greatly facilitates the wound healing through inhibiting the secretion of matrix metalloproteinases in the local site of wound [8]. Finally, nano-silver dressing has an antibacterial or bactericidal effect against a wide spectrum of bacteria including Clostridium perfringens, Staphylococcus aureus, Enterobacter, and Candida albicans [9]. More importantly, nano-silver dressing could be less likely than traditional antibiotics and silver sulfadiazine to spur the development of drug-resistant bacteria [8]. Therefore, it is of great importance to comprehensively evaluate the efficacy of nano-sliver.

We conducted this meta-analysis based on the Cochrane Systematic Review to compare the efficacy of the two treatment regimens in the healing time, healing rate, incidence of secondary bacterial infection and other outcomes in the treatment of degree II burn wound, and to provide relevant evidence for clinical decision-makers in clinical therapy.

Studies fulfilling the following inclusion criteria were included in this meta-analysis: (1) study type of Randomized Controlled Trials (RCTs); (2) studies including burn patients without restriction of age and gender; (3) patients in intervention group were treated by nano-silver, nano-silver formulations or nano-silver combined with other drugs; while patients in control group were treated by silver sulfadiazine; (4) endpoints included wound healing time, the number of wound healing and the rate of bacterial infection. Following studies were excluded in the final analysis: (1) full text or sufficient data of two groups cannot be obtained; (2) descriptive studies or clinical studies without appropriate control group; (3) literature reviews, case reports or editorials; (4) studies of animal experiments; (5) comparative studies of the clinical efficacy between the nano-silver and other non-silver sulfadiazine agents.

We conducted a systematic search of RCTs from English electronic database including Cochrane Library, MEDLINE (PubMed) and EMbase, and Chinese database including Chinese BioMedical literature Database (CBM), Chinese National Knowledge Infrastructure (CNKI) and VIP database from inception to November 2016. The searching words included English terms of “nano crystalline silver” and “burn” and Chinese terms of “nano-silver” and “burn” in the English and Chinese database respectively. A search strategy of combination of random words and subject words was used.

All meta-analysis were conducted using Review Manager (RevMan) version 5.2 statistical software provided by the Cochrane Collaboration. Counting data and measurement data were analysed using Relative Risk (RR) with 95% Confidence Interval (95% CI) and Mean Difference (MD) with 95% CI respectively for the assessment of drug efficacy. Heterogeneity across the included studies was evaluated by χ2 test and I2- values. If there was no statistical heterogeneity (p>0.1 and I2<50%), fixed effects model was applied; otherwise, if there was statistical heterogeneity (p<0.1 and I2>50%), the sources of heterogeneity was explored to determine whether the random effects model was available in the process of metaanalysis. If that were obviously heterogeneous among the included studies, only description of the features of the studies was demonstrated. P<0.05 was considered as statistically significant.

The initial application of search strategy yielded 354 potentially relevant RCTs studies; after removal of duplicated studies and screening the full-text of articles according to inclusion and exclusion criteria, 17 studies [11-27] involving 1575 participants were ultimately included. The flow chart of our search strategy was shown in Figure 1. There were no significant differences among the included studies at baseline. The quality of studies were evaluated and classified into grade A of 4 studies [13,24-26], grade B of 12 studies [11,12,15-23,27] and grade C of 1 studies [14]. Based on the recommendation of Conchrane Handbook, the approach of randomization method were carried out in 8 studies [13,16,19,20,24-27], appropriate allocation concealment were used in 5 studies [13,19,24-26], and the blinding methods of reporting results were used in 8 studies (Table 1) [13,16,19,20,24-27]. 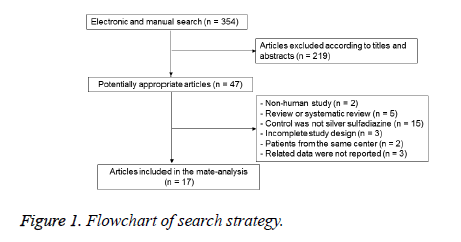 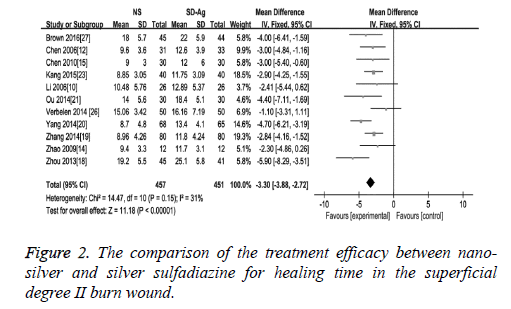 Figure 2: The comparison of the treatment efficacy between nanosilver and silver sulfadiazine for healing time in the superficial degree II burn wound.

Figure 3: The comparison of the treatment efficacy between nanosilver and silver sulfadiazine for healing time in the deep degree II burn wound. 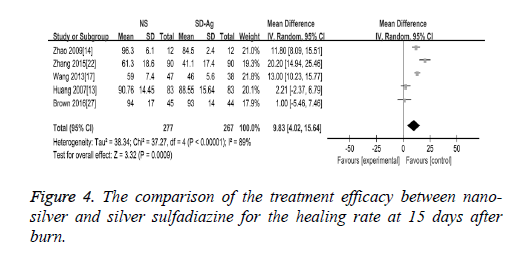 Figure 4: The comparison of the treatment efficacy between nanosilver and silver sulfadiazine for the healing rate at 15 days after burn.

Currently, the main drugs for degree II burn are sulfadiazine silver, nano-silver, biological agents, and Chinese herb drugs [28,29]. It is reported that silver sulfadiazine is an effective agent to promote wound healing, reduce wound pain and inhibit bacteria growth at the site of wound, which make it one of the most widely used drugs in burn surgery [30]. However, silver sulfadiazine could cause the damage of normal tissue cells and absorption of a large amount of silver ions, which ultimately result in the dysfunction of liver and kidney [30]. Compared with silver sulfadiazine, nano-silver has unique advantages in the controlling of local infection and promotion of wound healing [31]. However, the differences in other aspects between these two drugs are still unclear.

The incidence of bacterial infection 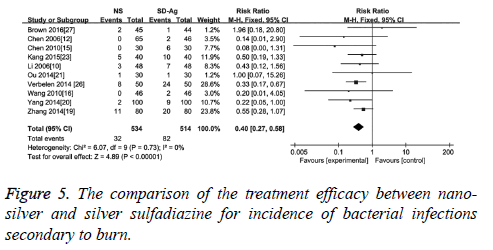 Figure 5: The comparison of the treatment efficacy between nano-silver and silver sulfadiazine for incidence of bacterial infections secondary to burn.

Figure 6: The comparison of VAS scores between nano-silver and silver sulfadiazine.

In this study, we conducted a meta-analysis to compare the difference of nano-silver and silver sulfadiazine in wound healing rate, wound healing time, incidence of bacterial infection, and VAS score. A total of 17 RCTs involving 1575 patients were analysed. Our findings suggested that, compared with silver sulfadiazine, nano-silver significantly decreased the healing time in patients with degree II burn, including both the superficial and deep degrees. And, nano-silver also significantly increased the wound healing rate at 15 days after burn and reduced the incidence of secondary bacterial infection after burn and the VAS score. These findings may provide relevant evidence for clinical decision-makers in clinical therapy.

However, several limitations in our meta-analysis should be noticed. Firstly, the difference in the patients’ age, causes of burn, forms of nano-silver, and size of wound area will inevitably lead to defects on research consistency and influence the power of the meta-analysis. Secondly, the number of high-quality research articles is limited. Finally, the search strategy was performed with restriction of only English and Chinese languages, and the studies without sufficient details of data were excluded, which inevitably resulted in the selection bias.

In summary, our findings demonstrated that nano-silver significantly reduced the wound healing time, secondary burn infection rate and VAS score. However, the conclusion should be carefully explained and used in clinical practice. A larger sample, multi-centered and randomized controlled trials of high quality should be performed to collect more convincing evidence in the future.

The authors thank Chief Ran Huo (from Department of Plastic and Burn Surgery, Shandong Provincial Hospital) for kindly providing helpful advice in the conception, design, results analysis and critical revision in the article.