The effects of low level laser therapy (LLLT) on the testis in elevating serum testosterone level in rats.

Testosterone (T) plays a vital role in the sexual function and many other health-related phenomena. We conducted this study to examine the effects of low level laser therapy (LLLT) on the testis in elevating serum T level in rats. We performed the current experimental study using 30 male Sprague-Dawley rats (Orient Bio, Korea) aged six weeks, weighing 200 g. In rats of two laser groups, a 670-nm diode laser or an 808-nm one were irradiated to the testes at an intensity of 360 J/cm2/day (200 mW ´ 30 min) for five days. This was followed by the measurement of the depth of tissue penetration, that of serum T level and histopathological examination. Our results showed that the rate of tissue penetration was significantly higher in the 808 nm wavelength group as compared with the 670 nm wavelength group (P<0.05); serum T level was not significantly higher in the experimental groups as compared with the control group; but serum T level was significantly elevated in the 670 nm wavelength group on day 4. Thus the LLLT using a 670-nm diode laser was effective in increasing serum T level without causing any visible histopathological side effects. In conclusion, the LLLT might be an alternative treatment modality to the conventional types of testosterone replacement therapy.

A steroid hormone from the androgen group, testosterone (T) plays a vital role in the sexual function and many other health-related phenomena. Gonadotropin-releasing hormone (GnRH) is secreted from the hypothalamus, and it promotes the secretion of luteinizing hormone (LH) by stimulating the pituitary gland. Then, LH promotes the synthesis of T by stimulating the Leydig cells of the testis. In humans, T plays a very critical role in the development of male reproductive tissues and the expression of secondary sexual characteristics such as muscle, bone mass and hair growth [1].

Men with a low T level presented with such symptoms as decreased sex drive, impotence, fatigue, loss of lean muscles, fat accumulation and weight gain, an increased risk of osteoporosis and bone fractures and an increased risk of cardiovascular disease [2]. The Baltimore Longitudinal Study of Aging (BLSA) was conducted in a total of 890 male subjects, which showed that 20% of men in their 60s, 30% in their 70s and 50% in their 80s were hypogonadal [3].

To compensate for the abnormalities, T replacement therapy has been performed by the oral or parenteral route. Because there is no need for the assistance of physicians, oral administration is convenient for patients. But early pharmaceutical preparations entered blood circulation by the liver. Therefore, there is a possibility that this might cause cholestatic jaundice, hepatocellular neoplasms, peliosis hepatis and hepatocellular carcinoma. To minimize the toxicity, T undecanoate (TU) has been developed and it is absorbed by the lymphatic system [4]. Nevertheless, it is also not free from the possibility of side effects [5].

Parenteral methods are not so convenient as oral administration, which include syringe injections or transdermal applications such as gels, cream and patches. There is no denying their effectiveness. Following syringe injections of T enanthate and T cypionate, however, serum T level is abruptly increased or decreased. They are also known to cause side effects such as pain, edema or jaundice [6].

Low-level laser therapy (LLLT) has a wavelengthdependent capability to alter cellular behavior in the absence of significant thermal effects. To date, LLLT has been used for therapeutic purposes in treating wound healing, musculoskeletal pain and dental diseases [7,8]. Some studies have examined the effects of LLLT in augmenting the regeneration of various tissues such as skin, bone, skeletal muscle and nerve [7,9]. Cellular functions are altered by LLLT irradiation, which include an increase in protein synthesis, cell growth and differentiation, cell motility, membrane potential, binding affinities, neurotransmitter release, phagocytosis, ATP synthesis and prostaglandin synthesis [11]. But there are no established mechanisms by which these alterations occur. Components of the mitochondrial respiratory chain exhibit frequency- dependent spectra of the action, which leads to the speculation that the respiratory chain plays a vital role in the effects of LLLT [9].

Given the above background, we conducted this study to examine the effects of LLLT on the testis in elevating serum T level in rats.

Prior to the experiment, 30 Sprague-Dawley male rats (Orient Bio, Korea) aged six weeks, weighing 200 g, were given a 1-week adaptation period. These experimental animals were divided into three groups: the control group, the 670 nm wavelength group and the 808 nm wavelength group. Each group comprised ten rats. The rats were anesthetized with KetaminÒ (Yuhan Corp., Korea) 30 mg/kg and RumpunÒ (Bayer, Leverkusen, Germany) 2 mg/kg before the experimental procedures. At the end of experimental procedures, rats were sacrificed for histopathologic examination. The current experimental study was conducted in compliance with all the ethical guidelines of the Dankook University Institutional Animal Care and Use Committee.

2. Laser irradiation and the measurement of tissue penetration

In rats of two laser groups, a 670-nm diode laser or an 808-nm one (LAS-30A, Daedeok Laser, Daejeon, Korea) were irradiated to the testes at an intensity of 360 J/cm2/day (200 mW ´ 30 min) for five days. But rats of the control group were placed on the operation table for laser therapy for 30 minutes without any laser irradiations.

Blood samples were collected at 08:00 A.M. before each session of laser irradiation on days 2, 3, 4, 5 and 6. Blood samples were not drawn on day 1, but laser irradiation was given to both wavelength groups (670 nm and 808 nm). Serum T level was measured with a radioimmunoassay using COBRA II Gamma counter (PacKard, USA) at the Seoul Medical Science Institute (SMSI, Seoul, Korea). On day 6, the testis tissue samples were obtained from all the three groups for a histolopathological examination. In each group, the testis tissue samples were fixed with 3.7% formaldehyde and prepared into a 5-mm thick slide through a paraffin block. This was followed by hematoxylin and eosin (H&E) staining.

All data are expressed as mean±SD (SD: standard deviation). Statistical analysis was performed using the Statistical Package for the Social Sciences (SPSS) program. A P-value of <0.05 was considered statistically significant.

1. The rate of tissue penetration

Following the irradiation of the tissue surrounding the testis with lasers of two different wavelengths (670 nm and 808 nm), the rate of tissue penetration was 15.5±6.7% and 35.4±11.0% in the corresponding order (Fig. 1). These results indicate that the rate of tissue penetration was significantly higher in the 808 nm wavelength group as compared with the 670 nm wavelength group (P<0.05).

Figure 1: The depth of tissue penetration was significantly greater following irradiations with an 808-nm diode laser as compared with those with a 670-nm one (P<0.05). 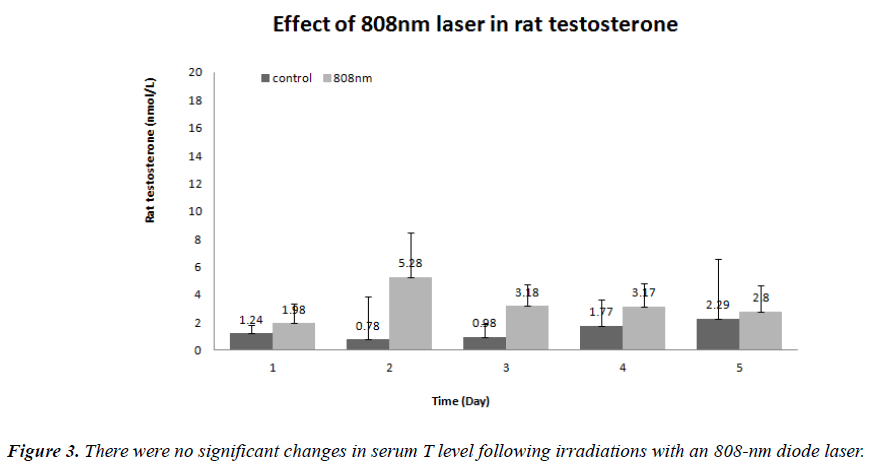 Figure 3: There were no significant changes in serum T level following irradiations with an 808-nm diode laser. 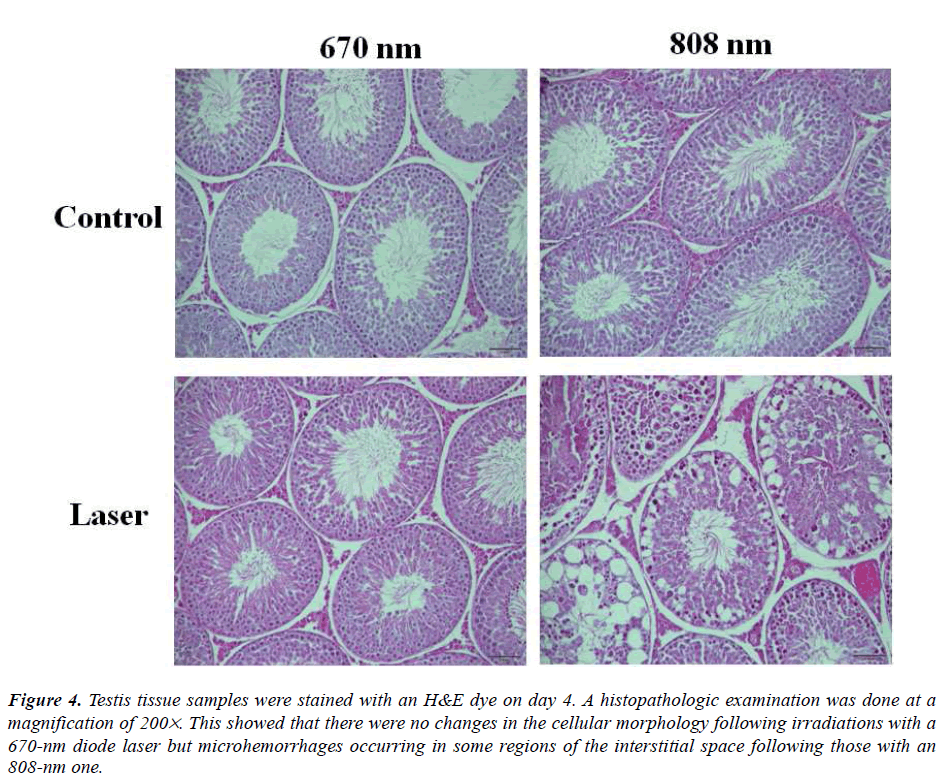 Figure 4: Testis tissue samples were stained with an H&E dye on day 4. A histopathologic examination was done at a magnification of 200´. This showed that there were no changes in the cellular morphology following irradiations with a 670-nm diode laser but microhemorrhages occurring in some regions of the interstitial space following those with an 808-nm one.

Our results indicate that the LLLT might be an alternative modality to the conventional testosterone medications. In addition, there were different reactions of the tissues to the light of different wavelengths. To confirm the effectiveness of the laser treatments, various types of laser should be tested. This should also be followed by the establishment of a safe, solid protocol depending on the wavelength, power intensity and an ability of the different types of lasers to penetrate the tissue. Further studies are also warranted to examine the mechanisms by which the laser treatments affect serum T level as compared with the conventional types of testosterone replacement therapy. In addition, it should also be thoroughly examined for whether the LLLT has any adverse effect on the testis.

Our results showed that the LLLT using a 670-nm diode laser was effective in increasing serum T level without causing any visible histopathological side effects to the tissue. Thus the low level laser therapy may be an alternative treatment modality for conventional types of testosterone replacement therapy.

Sincere appreciation and thanks to the Dankook University Medical Laser and Device Research Center for their financial support.