The effects of lovastatin on the morphology, cell viability and differentiation of stem cells derived from gingiva

Department of Periodontics, College of Medicine, the Catholic University of Korea, Seoul, Republic of Korea

The aim of this study is to evaluate the effects of lovastatin on the cell viability and osteogenic differentiation of human gingiva-derived stem cells. Stem cells were cultured in the presence of lovastatin at concentrations ranging from 2 μM to 6 μM. The morphology and cell viability were evaluated on days 2, 7, and 14. The alkaline phosphatase activity test and alizarin red-S staining were used to assess the osteogenic differentiation and mineralization. Quantitative real-time polymerase chain reaction was used to evaluate the mRNA levels of Runt-related transcription factor 2 (Runx2) and collagen I. Immunofluorescent assays were performed for Runx2 and collagen I, and protein expressions were measured, including those of Runx2 and collagen I, using Western blot analysis. The shapes of the cells in 2 μM lovastatin were similar to those of the untreated control group, showing revealed a spindleshaped, fibroblast-like morphology. However, the shapes of the cells in the 6 μM groups were rounder, and fewer cells were present. The CCK-8 values of 0 μM, 2 μM, and 6 μM at day 14 were 207.4 ± 15.5, 188.1 ± 13.3, and 166.0 ± 32.3, respectively (P<0.05). Decreased mineralization was noted in the 2 μM and 6 μM groups, when compared the 0 μM control. The relative alkaline phosphatase activity values of the 0 μM, 2 μM, and 6 μM groups were 100.0 ± 6.8, 70.5 ± 6.8, and 57.5 ± 5.8 on day 14, respectively. The expressions of Runx2 and collagen I by immunofluorescence decreased as the dose of lovastatin increased. The application of lovastatin produced decreased cell viability and decreased osteogenic differentiation in this experimental setting. It should be considered that the use of higher doses of statin may yield a negative effect on cell viability and differentiation of stem cells.

Statin is a specific inhibitor of 3-hydroxy-3-methyl-glutaryl coenzyme A reductase [1]. It is known to be a rate-limiting enzyme involved in the cholesterol synthesis pathway. Statins are shown to have immunomodulatory and anti-inflammatory activities and may prove invaluable in treating immunological and inflammatory disorders [2]. Statins have been reported to have anabolic effects on bone and may produce positive effects on both the differentiation and mineralization of osteoprecursor cells [3,4].

Stem cells are known to possess the capacity for self-renewal and the potential for differentiation into chondrogenic, adipogenic and osteogenic cells [5]. These cells have been applied for the engineering of various tissues, including for bone, cartilage, fat, and other connective tissue [6]. These cells can be obtained from bone marrow, adipose tissue and turbinate tissues [7,8]. Our groups have isolated mesenchymal stem cells and characterized from the human gingiva; these cells can be under local anesthesia during the daily practices [9].

Lovastatin is a cholesterol lowering agent, along with its family member’s simvastatin, atorvastatin and pravastatin [10]. It has been reported as being representative of therapeutic regimens. Lovastatin is shown to inhibit the cell proliferation, cell migration, and cell adhesion of cancer cells [11]. Moreover, statin has been demonstrated to promote osteoblastic activity [1,12]. However, the effects of lovastatin on mesenchymal stem cells are not well revealed. Thus, the aim of this study is to evaluate the effects of lovastatin on the cell viability and osteogenic differentiation of human gingivaderived stem cells. The alkaline phosphatase activity test and alizarin red-S staining were used to assess the differentiation and mineralization of the treated cells. Quantitative real-time polymerase chain reaction was used to evaluate the mRNA levels of Runt-related transcription factor 2 (Runx2) and collagen I, and protein expressions of Runx2 and collagen I were measured using Western blot analysis. To our knowledge, this investigation is the first to elucidate the effects of lovastatin on the expressions of Runx2 and collagen I in mesenchymal stem cells derived from gingiva.

Isolation and culture of human gingiva-derived stem cells were performed following a previously reported method [7]. The Institutional Review Board has approved this study and the informed consent was obtained from the participants.

The stem cells were incubated in α-MEM, fetal bovine serum, ascorbic acid 2-phosphate, glutamine, penicillin, and streptomycin in the presence of the lovastatin at final concentrations of 0 μM (untreated control), 2 μM, and 6 μM. On days 2, 7, and 14, an inverted microscope (Leica DM IRM, Leica Microsystems, Wetzlar, Germany) was used to evaluated the cell morphology.

On day 14, alizarin red S assays were performed. Cells were washed with phosphate-buffered saline (PBS; Welgene, Daegu, South Korea), fixed with ethanol. These cells were stained with alizarin red S at room temperature, and the cells were viewed under a microscope.

An immunofluorescent assay was performed for Runx2 and collagen I on day 14. The cells were fixed, permeabilized, blocked, and incubated with primary antibodies. The cultures were incubated with fluorescein isothiocyanate-conjugated secondary antibody, and then the washed cells were stained with 4’, 6-Diamidino-2-Phenylindole (DAPI). Analyses were performed using a fluorescence microscope (Axiovert 200, Zeiss, Jena, Germany).

The data are represented as means ± standard deviations of the experiments. Commercially available program (SPSS 12 for Windows, SPSS Inc., Chicago, IL, USA) was used to evaluate the differences between the groups by either Student’s t-test or a two-way Analysis of Variance (ANOVA) with post hoc test. The level of statistical significance was considered as 0.05. 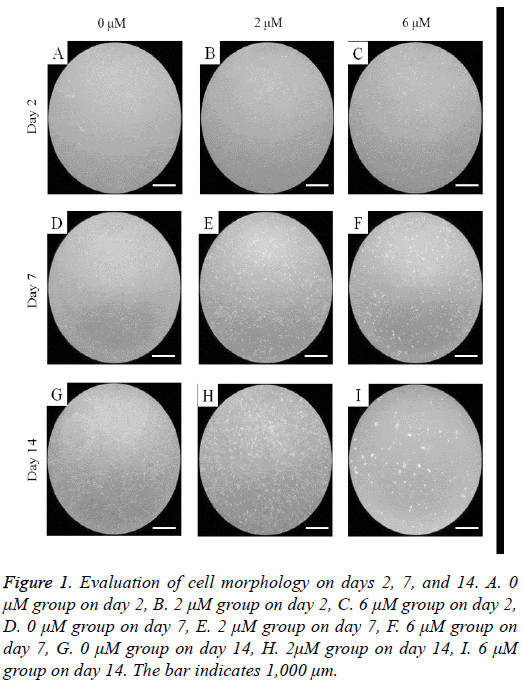 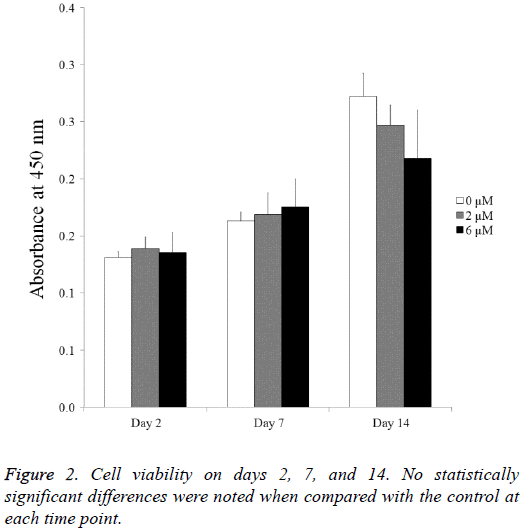 Figure 2: Cell viability on days 2, 7, and 14. No statistically significant differences were noted when compared with the control at each time point. 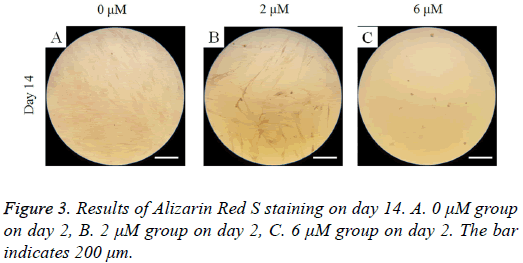 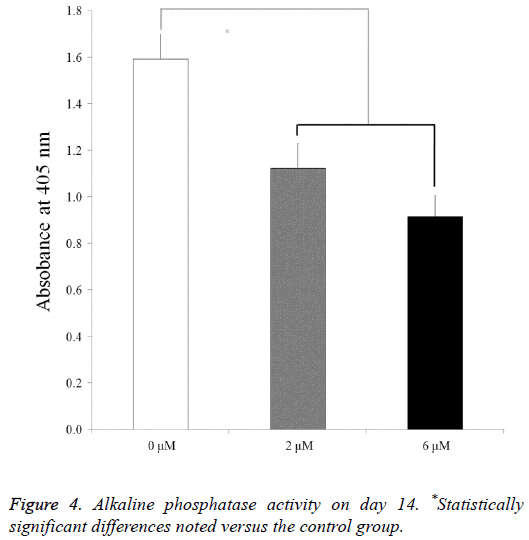 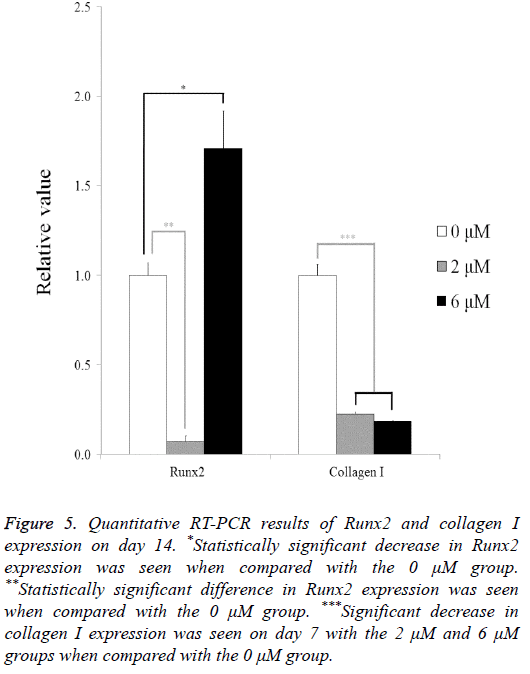 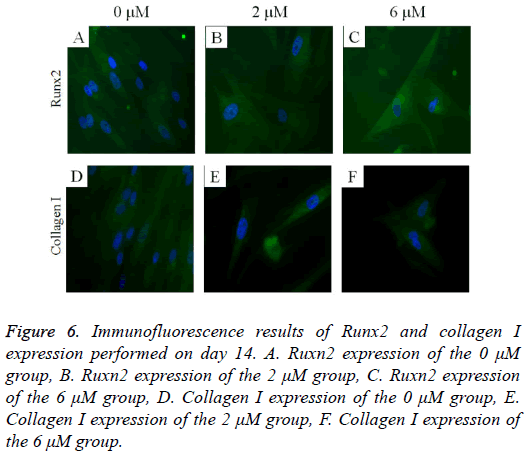 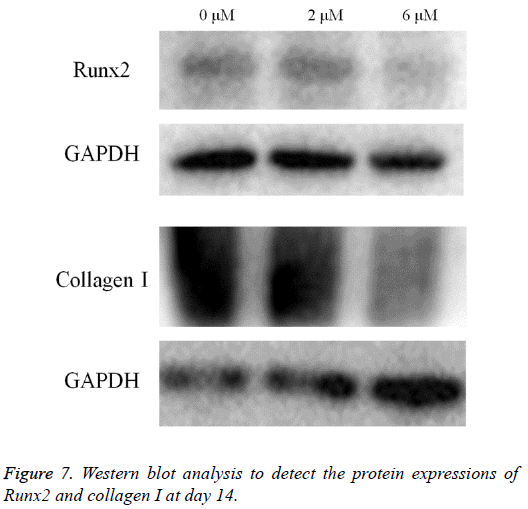 Figure 7: Western blot analysis to detect the protein expressions of Runx2 and collagen I at day 14. 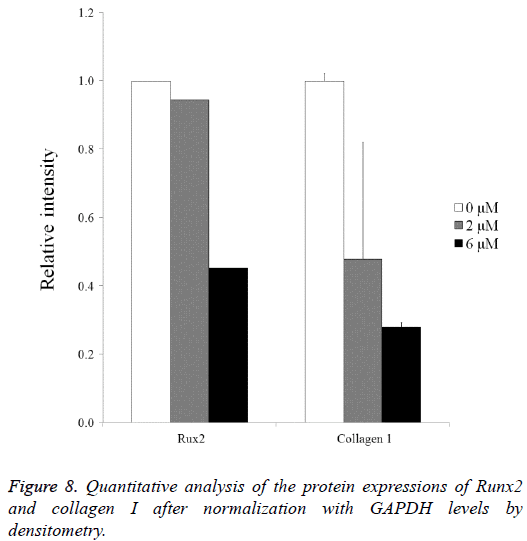 Figure 8: Quantitative analysis of the protein expressions of Runx2 and collagen I after normalization with GAPDH levels by densitometry.

This study clearly shows that lovastatin in the tested concentrations decreased the viability of stem cells derived from gingiva and decreased the osteogenic differentiation of the stem cells via the Runx2 and collagen I pathway.

This report discusses the effects of lovastatin on the morphology of cells under predetermined concentrations (2 μM to 6 μM). In a previous study, lovastatin inhibited the proliferation of carcinoma cells: after 24 hours of exposure at 5 μM and 10 μM concentrations, cell growth decreased by 20 to 50%, respectively [11]. It was also shown that 10 μM of lovastatin inhibited the cell proliferation of cholangiocarcinoma cells [11]. Additionally, the stimulatory effects were shown at 1 μM of statin in human bone marrow stromal cells [2]. The lovastatin may have inhibited cell proliferation through transforming growth factor-β1 to block cyclooxygenase-2 and intercellular adhesion molecule-1 mRNA expression through serine/threonine kinase 11. Similarly, this study clearly showed decreased proliferation of stem cells at the tested concentrations. Although cytotoxicity evaluation of the lovastatin itself did not affect the morphology of the mesenchymal stem cells at 2 μM, higher doses of lovastatin (6 μM) produced rounder shapes with fewer cells. In this study, cell viability was evaluated using a Cell Counting Kit-8 assay, which is based on mitochondrial enzyme activity and the quantification of generated formazan [13]. Other methods may be applied to test cell proliferation [14-17]. Trypan blue is based on the principle that live cells have intact cell membranes which prevent penetration of the trypan blue dye [14]. A protein assay measures the protein content of the tested cells and this may be considered as an indirect measurement [15]. The MTT assay measures viability by analyzing the mitochondrial dehydrogenase activity of live cells; however, it requires the solubilization of formazan crystals [16]. A thymidine incorporation assay can be applied to evaluate cell proliferation [17].

Osteogenic differentiation can be evaluated through alkaline phosphatase activity, which is an early marker of ostegenesis [18]. Following the period of matrix maturation, nodule cells begin to mineralize the extracellular matrix and Alizarin Red S staining is used to evaluate the amount of calcium deposits [19]. In this study, decreased mineralization and alkaline phosphatase activity were noted in a dose-dependent manner. However, in a previous study, the transdermal application of lovastatin onto rats caused profound increases in bone formation [20]. Similarly, the application of lovastatin is reported to enhance fracture healing [21,22]. The differences in the type cells, stages of the cells, the duration of the culturing time, and the system can explain the differences in the responses [1].

Qualitative RT-PCR and Western blot analysis were performed to detect the mRNA and protein expression of Runx2 and collagen I to provide information on possible mechanisms. Runx2 is reported to regulate a complex gene-regulatory network [23]. Runx2 is shown to be the transcription factor required for the osteoblast lineage [24]. Runx2 protein can be detected in preosteoblasts, and its expression is upregulated in immature osteoblasts [24]. However, it is downregulated in mature osteoblasts [24]. Type I collagen is also involved in regulating the osteoblast phenotype and is shown to possess the ability to stimulate alkaline phosphatase activity [25]. The decrease of Runx2 and collagen I expression was also seen with immunofluorescent assay.

This research was partly supported by Research Fund of Seoul St. Mary’s Hospital, The Catholic University of Korea and partly supported by Basic Science Research Program through the National Research Foundation of Korea (NRF) funded by the Ministry of Science, Information and Communication Technology and Future Planning (NRF-2014R1A1A1003106 and NRF-2016K1A1A8A01939075).