The effects of gender, unhealthy lifestyle and ALDH2 mutations on patients diagnosed with coronary artery diseases

#These authors equally contributed to this paper

Background: The potential associations between gender, lifestyles (only smoking and drinking habits considered), ALDH2 genotypes and Coronary Artery Diseases (CAD) have been sparingly reported. However, these previous researches did not provide a panoramic view on the inherent relationship between these negative factors and CAD.

Results: Based on the comparison between Group 2 and other groups, it was found that: first, the female patients suffered from significantly different symptoms of dyslipidaemia; second, it is obvious that patients bearing more bad habits were found more possible to get hyper TG. The frequencies of ALDH2 mutant genotypes in Group 1, Group 2 and Group 3 were higher than that of the healthy subjects. Also, it was found that subjects with the mutant genotypes suffered from hypo HDL-C more commonly, but hypertension was less prevalent among them, compared with patients taking wild genotype of ALDH2.

Conclusion: Gender, unhealthy lifestyle and ALDH2 mutations all had significantly effects on the progress of CAD by affecting the prevalence of dyslipidaemia or/and hypertension. The results of this research will help the treatment of CAD.

Alcohol consumption and smoking have been discovered to play an important role in Coronary Artery Disease (CAD). ALDH2, the primary enzyme involved in alcohol metabolism, contributes significantly to the ethanol-derived acetaldehyde and environmental aldehyde (acrolein) conversion [1,2]. Likewise, the mutant or inactive ALDH2*2 gene cause a significant accumulation of these harmful aldehydes. Therefore, the ALDH2*2 variant has been unanimously identified to be a risk factor for diseases related with smoking and drinking, such as CAD [1,3-9].

Over the past years quite a lot of efforts have been paid to illustrate the mechanisms how ALDH2 polymorphism influences the progress of CAD, focusing on the regulation of alcohol consumption, oxidative stress, asymmetric dimethyl arginine, the prevalence of hypertension and hyperglycaemia [4-6,8,9]. Also, smoking or/and drinking reportedly play roles in prevalence of dyslipidaemia and hypertension in CAD patients [10-13]. However, the synergetic effects of lifestyles and ALDH2 genotypes on dyslipidaemia and hypertension were not unified and even contentious. Albeit, most researches in East Asians reported that the genetic variation of ALDH2 could influence HDL-C levels, independent of or in company with alcohol consumption [14,15]. A study on Japanese population reported that after adjusting for other variables including drinking status carrying the mutant genotypes of ALDH2 was a significant and positive factor related to hyper- LDL-C [16]. Another study on Chinese male population disclosed that ALDH2 genotypes were significantly associated with serum TG levels in drinkers [17]. In addition, some studies unveiled that the wild-type ALDH2*1 allele was a risk factor for elevated blood pressure independently of alcohol consumption [18,19]. However, contradictorily, some studies proposed that the presence of ALDH2*1 gene enhance the risk of hypertension by affecting alcohol drinking behaviours [20]. Thus, based on this point, it was critical to conduct a comprehensive research on the potential relationship between these possible factors and CAD. This research was the first case that illuminated the independent and combined effects of gender, lifestyles and ALDH2 genotypes on the progress of CAD. And in our studies, CAD patients were recruited instead of healthy people, aiming to an improved risk management of CAD and precise therapies.

This study approved by the ethical committees of Henan Provincial People’s Hospital, was conducted from September 2012 to December 2014 in Henan Provincial People’s Hospital, Henan province, China. The CAD was diagnosed by angiography. Patients with excessive smoking (>20 g tobacco/ day) or excessive drinking (>100 g liquors/day) were excluded. And 800 CAD patients (579 males, 221 females) and 247 healthy people (186 males, 61 females) were registered in this study. Written informed consents were obtained from all patients. Subjects were divided into four groups based on the smoking or/and drinking status. All the involved female patients had no smoking or drinking history (Group 1, n=221). The male patients were categorized into three groups: Group 2 without smoking or drinking habits (n=346), Group 3 bearing only smoking habits (≤ 20 g tobacco/day, n=73) and Group 4having both smoking and drinking habits (≤ 20 g tobacco/day and ≤ 100 g liquors/day, n=160). Notably, few subjects having only drinking habits without smoking history were excluded.

Information about tobacco smoking, alcohol consumption and disease history was collected from the face-to-face interviews. Hypertension was defined as a systolic blood pressure larger than 140 mmHg and/or diastolic blood pressure larger than 90 mm Hg or history of hypertension. Dyslipidaemia was defined as TG levels higher than 1.7 mmol/L, TC levels higher than 5.2 mmol/L, LDL-D levels higher than 3.4 mmol/L, and HDL-C levels less than 1.0 mmmol/L or history of dyslipidaemia. Information on ages when they began to suffer from or diagnosed with CAD and they participated in this research was systematically recorded.

Venous blood samples were drawn and collected in Ethylenediaminetetraacetic Acid (EDTA) tubes. DNA was obtained by using a whole blood DNA extraction and purification kit (BaiO, Shanghai, China) according to the manufacturer’s instructions. Samples were coded to allow blinding of the investigators who carried out the genotyping. The ALDH2 genotypes was determined by PCR- Genotyping microarray analysis of the two important allelic variants (ALDH2*1 and ALDH2*2) by BaiO gene detection kit (Genotyping microarray method, BaiO, Shanghai, China).

The effects of ALDH2 genotypes on prevalence of dyslipidaemia and hypertension were investigated using Paired Samples T test. Chi-Square test was applied to determine the influences of gender, tobacco smoking and alcohol consumption in the cross-comparison between every two groups. A P value of <0.05 (two-tailed) was considered to be statistically significant.

The influence of gender on CAD patients

The clinical characteristics of the participants are shown in Table 1. No significant differences were observed in BMI and prevalence of hypertension and diabetes mellitus between Group 2 and Group 1. Compared with Group 2, the patients from Group 1 had higher prevalence of hyper-TC and hyper- LDL-C (P<0.001 and p=0.01 respectively), but female patients had lower prevalence of hypo-HDL-C than the male patients (P<0.001). Different gender had rather different features of dyslipidaemia.

The influence of lifestyle on CAD patients

It was found that it was easier for the male patients with more bad habits (from Group 2 to Group 4) to get overweight (BMI>25) and get CAD at younger age, evidenced by Figure 1. It can be obvious in Figure 2 that the prevalence of hyper- TG becomes higher and higher from Group 2 to Group 4. No significant differences were shown in the prevalence of hypertension and diabetes mellitus among the male patients.

Figure 1. The current ages, disease ages and BMI of the four groups. 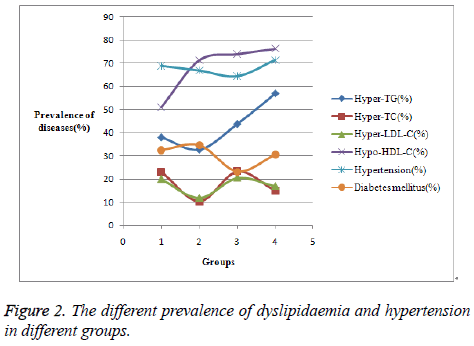 Figure 2. The different prevalence of dyslipidaemia and hypertension in different groups.

The influence of ALDH2 genotypes on CAD patients

First, the ALDH2 genotypes distribution in the different groups was shown in Table 2. It was noteworthy that patients in Group 1, Group 2 and Group 3 bore higher frequencies of ALDH2*1/*2 and *2/*2 alleles than the controls with P=0.040, 0.096 and 0.071, respectively. But patients from Group 4 had comparable frequencies of ALDH2*1/*2 and *2/*2 alleles with the controls.

Table 2. Distribution of ALDH2 genotype in the CAD patients and controls.

Table 3. The clinical characters of the subgroups with different ALDH2 genotypes.

The combined influence of gender, lifestyle and ALDH2 genotypes on CAD patients

As to the influence of lifestyle, it was discovered that the male patients with more bad habits were more inclined to obtain hyper-TG, hyper-TC and hyper-LDL-C. From Table 3, it is observed that it is easier for male patients from group 3 and group 4 with the mutant alleles of ALDH2 to get hyper-TG than those with wild ALDH2 genotype; in contrast, patients with wild ALDH2 genotypes were more inclined to get hyper- TC and hyper-LDL-C than those with mutant alleles of ALDH2. Furthermore, ALDH2 mutant alleles had been found as risk factors for hypo-HDL-C and diabetes mellitus, but the effects were significant only in female patients from Group 3 and Group 4. However, the effects of ALDH2 *1/*1 genotype on the prevalence of hypertension was independent of genders and lifestyles.

In conclusion, this research reported the independent and combined effects of gender, lifestyles and ALDH2 genotypes on the progress of CAD. It was expected to benefit the treatment of CAD. Abandoning these bad habits for patients with smoking or drinking histories or improving the HDL-C levels for patients with mutant ALDH2 genotypes can help reduce the TG levels and then slow down the progression of CAD. Notably, different therapeutic regimen can be considered for different genders, due to different lipid profiles between genders.