The effects of exogenous ketones on biomarkers of CrohnÃ¢ÂÂs disease: A case report.

In this paper, we report on a case study in which exogenous ketone supplementation lowered markers of CRP significantly and improved quality of life in an individual suffering from Crohn’s disease. As a result, this study is significant because Crohn’s disease is a growing autoimmune disease that is characterized by chronic inflammation. Moreover, this study is the first of its kind showing that betahydroxbutyrate (BHB) might combat some of that inflammation due to its anti-inflammatory properties that have been previously studied. Accordingly, this research could accelerate insight and investigation into the use of exogenous ketones and specifically BHB for digestive diseases that are characterized by excessive, chronic inflammation.

Crohn’s disease (CD) is an autoimmune disease in which the immune system attacks the gastrointestinal (GI) tract, causing chronic inflammation, bleeding, and even scarring. Over 550,000 people have this condition in the United States alone, yet there is no known cure [1]. Additionally, these numbers are likely a low representation of individuals experiencing CD due to underreporting and misdiagnosis. Furthermore, these numbers do not appear to be slowing as researchers suggest a dramatic increase in the prevalence of CD over the last two decades [2].

Recently, more researchers conducted studies concerning non-pharmaceutical therapies due to the cost-effectiveness and diminished side effects of these treatments. For example, they have examined probiotic supplementation to determine if the good bacteria could result in a beneficial microflora and ultimately combat the inflammation and disease itself. However, Ghione et al. [3] found insufficient evidence for probiotic supplementation’s effectiveness in preventing reoccurrence or reducing the severity of recurrent lesions.

Inflammation is a hallmark of this disease, and yet one marker, C-reactive protein (CRP), is highly reliable in determining the severity and onset of these auto-inflammatory conditions [4]. For this reason, ketogenic diets have garnished attention for their anti-inflammatory nature and ability to lower markers associated with inflammation [5]. Typically, this involves a high-fat, moderate protein, low carbohydrate style of eating. Although existing research in animal models indicates that eating high-fat diets may significantly alter the gut microbiota, it is uncertain what the ideal microbiota is and how this would impact individuals eating a ketogenic diet who suffer from autoimmune issues.

Recently, Menees et al. [6] placed an adolescent male with severe CD on a Paleolithic ketogenic diet. After two weeks on the diet, the subject eliminated all medications and his symptoms, typically associated with autoimmune conditions (e.g., night sweats, joint pain, and disrupted sleep) and disappeared. Additionally, the subject’s CRP levels significantly dropped within four weeks of being on the diet. Due to his situation, the subject was unable to eat extraordinarily high amounts of fat, yet saw radical improvements in his symptoms and severity of the disease with a modified approach.

Ketones (e.g., beta-hydroxylbutyrate) have shown to directly block the NLRP3 inflammasome [7]. Consequently, researchers hypothesize that ketones may drive the anti-inflammatory response of the diet, thus alleviating the pain and symptoms associated with CD. Therefore, the purpose of this study was to investigate the effects of a lifestyle intervention involving supplementation with exogenous ketones on biomarkers of Crohn’s disease.

At the time of the intervention, the patient had not taken any supplements for six months. The patient routinely developed flare-ups, which would result in frequent restroom visits (up to 10 times per day) and repeated vomiting. Prior to the intervention, the subject never performed active exercise other than standing at work and normal movement throughout the day. After baseline assessments, the subject incorporated daily walks of no more than 15 minutes on a treadmill.

Before the intervention, the subject had never taken exogenous ketones nor done a ketogenic diet. For the first two weeks, the subject took 4 grams of sodium BHB (KetoBioVantage, NNB Nutrition) every morning mixed in 8 oz of water with a non-calorie sweetener. Following the two weeks, the subject increased the dosage to 8 grams of a combination of sodium BHB, calcium BHB, and magnesium BHB (KetoBioVantage, NNB Nutrition) split throughout the day with ½ serving in the morning and ½ serving in the early afternoon. For the first seven days, the subject experienced flatulence following the supplementation; however, this went away after the first week.

A certified dietician advised the subject to follow a modified low carbohydrate diet, but did not recommend strict guidelines other than eliminating breads, candy, and pasta from the diet. Analysis of her diet-symptom diary did not demonstrate any consistent association between symptoms and food items; however, caloric intake was significantly higher than what she reported before the intervention.

Horizon DXA System (Hologic Inc., Marlborough, MA), a dual-energy x-ray absorptiometry device, ascertained the subject’s body composition by a whole-body scan before and after the intervention. Also, the system established Lean Body Mass (LBM), Fat Mass (FM), and Body Fat Percentage (BF%) for the total body while the subject lied in a supine position with knees and elbows extended and not moving for the duration of the scan (approximately five minutes). Results from each scan were uploaded and accessed on a computer that directly linked to the DXA device. The manufacturer calibrated the DXA device against a phantom before testing. 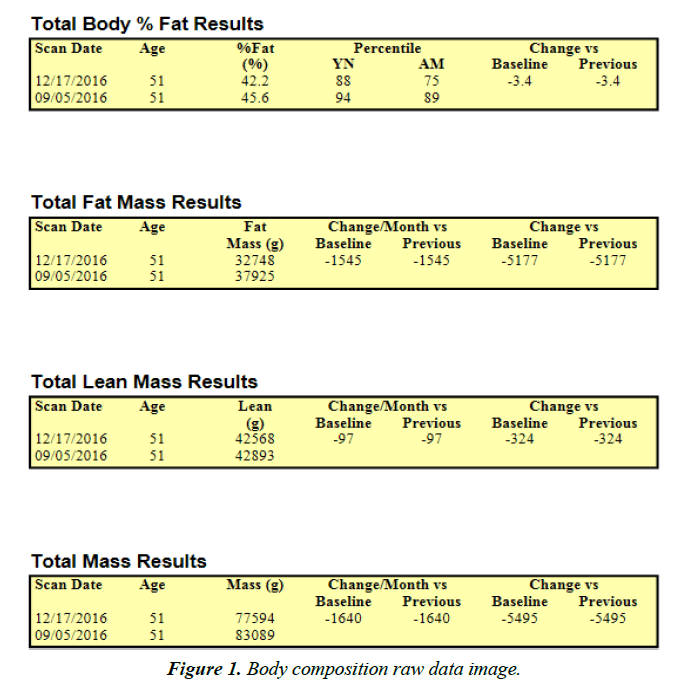 After only one week on the intervention, the subject reported feeling markedly better and had fewer frequent trips to the bathroom. After just three months on the intervention, the patient achieved full remission of symptoms, improvements in body composition, and normalization of markers of inflammation as evidenced by C-reactive protein. The patient strictly adhered to the protocol and consumed the supplementation and exercised daily. Based on the dietary analysis and weekly recall of food consumption, the subject maintained a flexible, lower carbohydrate diet, yet reported at least one day per week where she would have some higher carbohydrate foods (e.g., sandwich or a cookie for dessert). Thus, the diet was not ketogenic, despite the patient consuming a low calorie and carbohydrate diet for most of the intervention period. The subject reported not being able to cope with any oils (e.g., MCT, olive, or coconut) in high amounts without gastric distress, but slowly increased fiber intake through daily salad consumption. Most days the subject reported merely consuming a salad for dinner while the only other calories ingested coming from the exogenous ketones. This behavior was typical of the subject as she routinely would fast before the intervention.

Typically, Crohn’s disease is characterized by a progressive worsening of symptoms. In this instance, immuno-suppressants are widely prescribed as a standard of care; however, limited research has examined their efficacy in well-controlled trials despite numerous side effects reported [8]. The subject in this study did not have health insurance or access to any medical treatments or drugs for several years, despite the progressive worsening of symptoms and the continuous flare-ups. Previous research has noted that the immunosuppressant azathioprine may offer benefits over a placebo for those experiencing CD flare-ups [9]. However, in that same trial, over 50% of the treatment groups were classified as “non-responders” to the drug, and those in the intervention group saw a significant drop in white blood cell count (leukopenia).

It is essential to understand and adequately vet nonpharmaceutical alternatives for both efficacy and side effects before applying them as a strategy to assist in managing certain conditions. In this case, the lifestyle intervention involved a combination of diet, exercise, and supplementation. The subject reported no significant side effects nor did the blood work indicate anything other than minor intestinal discomfort for the first few days. Unfortunately, it is difficult to precisely pinpoint what produced the astonishing reduction in inflammation and profound improvements in body composition. However, it is evident that any type of structured exercise may lead to improvements in body composition. In totality, the subject reported approximately 75 minutes of moderate activity per week (five days at 15 minutes per day walking), which is still under the Center for Disease Control and Prevention recommended 150 minutes per week of moderate activity exercise (CDC, n.d.). Additionally, erstwhile research has proven beneficial outcomes of patients with CD incorporating a Paleolithic ketogenic diet [10]. These authors allude to the possibility that certain components of the Western-type diet may compromise the intestinal barrier function and drastically alter intestinal permeability. Thus, it is plausible that the lowered carbohydrate consumption combined with slightly increased protein intakes may help normalize intestinal permeability and cease autoimmune destruction typically caused by poor eating habits.

Beta hydroxybutyrate (BHB) is a ketone body that is naturally produced in the body during states of ketosis but can also be delivered via supplementation. In fact, recent evidence has shown the direct effects of BHB’s anti-inflammatory properties. For example, Yamanashi et al. [11] reported that BHB inhibits the NLRP3 inflammasome and reduces NLRP3 inflammasome- mediated interleukin (IL)-1β and IL-18 production in human monocytes. Furthermore, Youm et al. [12] found that BHB attenuated stress-induced increases in IL-1β and TNF-α in the hippocampus. Most recently, Youm et al. [12] found that BHB blocked IL-1β in neutrophils in an NLRP3-dependent manner in mice and human models of gout. Consequently, these studies lend credence to the fact that BHB itself may be directly acting on the inflammasome, and, therefore, initiating the changes we observed in our subject’s CRP, WBC, and neutrophil numbers.

This case report is the first to administer a lifestyle intervention involving exogenous ketones for a patient diagnosed with CD. Our results show promise for a combination of light to moderate exercise, small nutritional changes, and exogenous ketones supplementation on significantly improving inflammation and quality of life in this patient. Future research should expand upon these findings to examine exogenous ketone supplementation alone and in conjunction with lifestyle interventions in a larger patient population with Crohn’s Disease.

The authors, RPL and JMW, are minority owners in a holding company that filed for a patent on a similar technology as used in this study. However, none of these data, nor similar claims were utilized in the patent. Authors MHS, GJW, and RW declare no conflicts of interest.