Methods: Human lung cancer cells were treated by different concentrations of the AGl478 and EGFR signal pathway related inhibitors LY294002, U0126 and AG490. Western blot was used to examine the expression and the nucleus or cytoplasm distribution of SOX2. AKT siRNA and SOX2 siRNA were designed and transfected into H1650 cells. Western blot were employed to determine the transfection efficiencies.

Conclusions: SOX2 can be a potential target of the cancer therapy and drug exploitation in NSCLC.

Lung cancer is one of the most common but with the highest mortality cancers in the world, based on the present studies, more than one million deaths were caused worldwide by this disease each year [1,2]. Despite the recent advances, the incidence and mortality rate of lung cancer has increasing rapidly [3,4]. Lung cancers are histologically classified as Small-Cell Lung Cancer (SCLC) and Non-Small-Cell Lung Cancer (NSCLC), with the composition about 15% and 85% accordingly [5]. NSCLC includes adenocarcinoma, squamous cell carcinoma and large cell carcinoma [6,7]. To date, palliative chemotherapy is the optimum option for most patients [8]. However, chemotherapy resistance, is easy to emerge during treatment, and leads to increased treatment failure rates about 40-60% for lung cancer [9]. Accordingly, the ideal of targeted specific therapy for lung cancer is becoming a hot research topic [10]. Indeed, many synergistic antitumor or multi-targeted agents for lung cancer has been tried in preclinical and clinical studies, their effects of preventing the emergence of drug resistance or treatment efficiencies are inadequately for clinical applications[11]. Researches about novel functions of many regulator encoding genes for lung cancer treatment seem more attractive. The SOX2, which is located at 3q 26.33, has been validated to be a transcription factor that is essential to maintain the pluripotency of embryonic stem cells [12]. Studies showed SOX2 could express in many kinds of tumor tissues, including breast cancer, prostate cancer, glioblastoma, rhabdomyosarcoma and leukemia [13,14]. Inhibited SOX2 expression could promote cell malignant transformation, tumor progression and angiogenesis processes during the development process of tumorigenesis [13,15,16]. Comprehensive genomic characterization of SCLC and Squamous Cell Carcinoma (SCC) showed SOX2 acted as a frequently amplified lineage-survival oncogene in lung cancer cells [17,18]. Moreover, down-regulation the expression of SOX2 markedly decreased the translation level of SOX2 protein and reduced the cell proliferation rate in SCLC cell lines, suggesting the SOX2 is a critical gene functioned in tumor suppressing in SCLC, which may be used as a new chemotherapeutic drug targets [17].

AGl478 (4-(3-chlorophenyl amino)-6, 7-dimethoxy-quinazoline), a low molecular weight compound having an ATP-binding site for efficient reversible binding with EGFRTKI, can inactivate the phosphorylation and dimerization of EGFR, directly inhibit the overexpression of EGFR in tumor tissues and increased the sensitivity to drugs such as carboplatin, doxorubicin and etoposide [19-22]. This study investigates the regulation effect of AGl478 (EGFR-TKI) on SOX2 protein expression and nuclear plasma distribution in NSCLC patients.

Human lung cancer cell lines of A549 and H1650 were cultured in RPMI-1640 medium supplemented with 10% FBS. They were incubated at 37°C in a humidified atmosphere of 5 % CO2 and were harvested when they reached 80-90% fusion with 0.25% trypsin digestion for the experiment.

1 × 106 cells were diluted with RPMI-1640 medium containing 4 μmol/L AGl478, 20 μmol/L LY294002, 10 μmol/L U0126 or 100 μmol/L AG490, respectively. Then they were seeded in 6 cm dish for 48 h, rinsing cells 1 time by cold PBS, and ice cracking and cell lysates were collected from each group. The proteins were separated using SDS-PAGE. Blots were subsequently transferred to PVDF membranes at (100 v, for 100 min). The membranes were blocked for 2 h by 5% milk; thereafter they were hybridized with primary antibodies (1:1000) of FOXMl, SOX2, P-Sox2, P-ERKl/27P-AKT and AKT monoclonal antibodies at 4°C overnight. GAPDH expression was used as an internal control. Secondary antibodies were used at a 1:5000 dilution for 1 h at room temperature. Chemiluminescence assay was performed to determine protein expression.

The logarithmic growth phase of AKT siRNA transfected H1650 cells were seeded in 6-well plates, the morphology was observed under microscope, cells fused when at a transfection rate 50% to 60%. AKT siRNA duplexes sequence were 5’ GGAACGUGAUGCUUCGCAATT3’ and 5’ AGGGAAGUUUGGUUCAAUCATT3’ unrelated Negative Control (NC) sequence were: 5’UUCUCCGAACGUGUCACGUTT3’ and 5’ ACGUGACACGUUCGGAGAATT3’.

After transfected for 8 h, incubated with fresh culture medium and cells were collected at different times point as following experiment conducted.

Immunofluorescence cells coverslip of the polylysine dry, placed in 6-well plates, 105 cells were seeded. The transfection medium was discarded after 72 h and cells were rinsed with PBS, fixed in 4% paraformaldehyde for 30 min, added 0.5% Triton X-100, allowed to stand for 15 min, 10% BSA for 1 h, l % BSA was added to dilute antibody, dark incubation at 37°C for 2 h, fluorescent secondary antibody at room temperature in the dark for 1.5 h, added DAPI 5 μg/ml for 2 min, then they were mounted prior to fluorescent microscope observation.

Western blot results (Figure 1) showed, compared with the control group of GAPDH, that the SOX2 protein level was gradually increased with prolonged detection time points at 2, 6, 12, 24 and 48 h following L AGl478 treatment in A549 cells (Figure 1A). The SOX2 protein was gradually shifted from the cytoplasm to nucleus in a time-dependent manner (Figure 1B).

Western blot results showed (Figure 2), compared with the control group of GAPDH, that the translation level of SOX2 protein in the cells treated by LY294002 was significantly increased, the U0126 treated group was weaker, and the AG490 treated group was the weakest (Figure 2).

Figure 2. Effect of AG1478 and relative EGFR downstream signaling pathway inhibitors on expression of SOX2 in A549 cells. *SOX2 protein was significantly increased as compared to GAPDH (P<0.05).

Compared with the control group, treated by AKT molecule (Figures 3A and 3B), or by the PI3K/AKT inhibitor LY294002 (Figure 3C), the translation levels of P-AKT and P-Sox2 molecules in H1650 cells were significantly reduced, and the transcriptional level of SOX2 was unchanged or slightly increased. 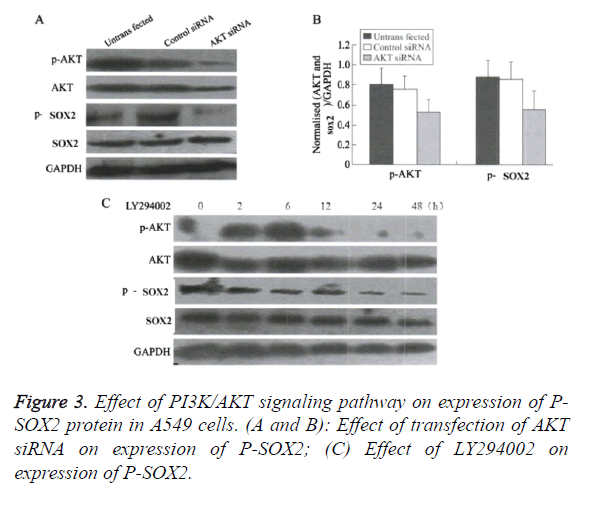 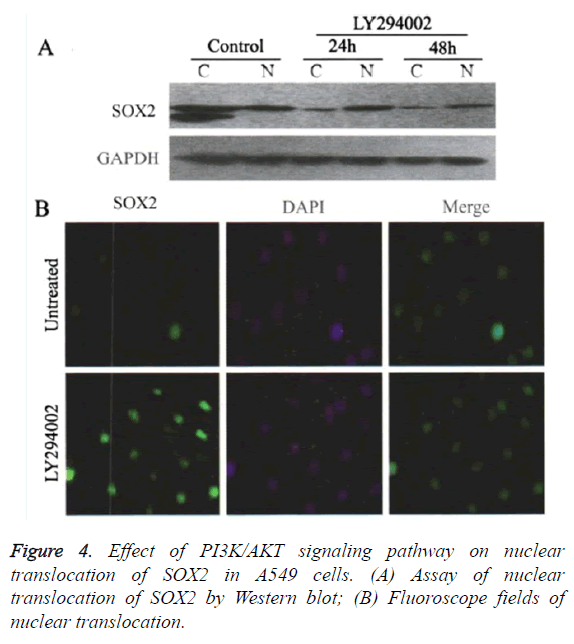 Lung cancer is a one of the most common and polygenic malignant solid cancer resulting from complex interactions between environmental and genetic factors, and the incidence is increasing in both developed and developing countries. In facing this situation, there are more and more studies has been carried out for lung cancer treatment in preclinical and clinical trials, and a number of drugs has been approved for use, while an incredibly high rate of acquired resistance have limited their clinical applications. At the current lung cancer treatment, monotherapy of the chemotherapy is still the standard secondline treatment for advanced NSCLC, despite excellent initial responses to therapy, however, most lung cancer patients will go on to develop acquired resistance, developing new therapeutic strategies to overcome the acquired multidrug resistance represent priorities in the field. Therefore, targeted therapy combined with inhibition of multiple signaling pathways was studied to confer additive or synergistic antitumor effects and increased clinical benefit for advanced NSCLC patients [23,24]. A number of studies have confirmed SOX2 played a tumor suppressor role in anti-tumorigenesis processes, so it may be studied as a new target for many drugs. SOX2 is a subtype of FOX (forkhead box) family, and its conserved DNA binding domain (Forkhead box) is well characterized. SOX2 overexpression inhibits the growth of breast cancer cells, and its cytoplasmic localization is closely related with breast cancer [15,25,26]. Many factors involved in the AKT, IKK and ERK pathways can affect the translation, translocation or degradation of SOX2, such as EGFR. EGFR extracellular growth signals can block the MAPK, PI3K/AKT and JNK STAT signal pathways, then inactivating the translation and translocation of SOX2, and finally promote other regulatory, such as DNA synthesis, cell proliferation, angiogenesis, invasion and metastasis. The EGFR signals blocking factors may induce the overexpression of SOX2 or the translocation of SOX2 from the cytoplasm to nucleus. AGl478 was verified to inhibit the overexpression of EGFR in tumor tissues, and then inactivated the phosphorylation and dimerization of EGFR, while whether it has effect on the translation and translocation of SOX2 is not been studied and verified.

This study showed that the EGFR tyrosine kinase inhibitor AGl478 can activate the expression of SOX2 through the PI3K/AKT signaling pathway, promote SOX2 transferring from the cytoplasm to the nucleus. AGl478 increased the translation level of SOX2 mainly by inhibiting the downstream signaling pathways of EGFR. The activity of AGl478 may promote the targeting EGFR-TKI treatment effect of SOX2 in lung cancer patients, which may provide a new theoretical basis and new idea in developing the SOX2 as a new target for many drugs in lung cancer treatment, but these need to be examined and revised in the further studies.

The EGFR was easily overexpressed or mutated in NSCLC patients [27,28] and the EGFR extracellular growth signals can affect the MAPK, PI3K/Akt and JNK STAT signal pathways, then affect DNA synthesis, cell proliferation, angiogenesis, invasion and metastasis. SOX2 is a key regulator of pluripotency in embryonic stem cells and plays important roles in early organogenesis. Its expression was documented in various cancers and suggested as a cancer stem cell marker.