The effects of a pulmonary rehabilitation program on exercise tolerance, quality of life, sleep quality and emotional status in the patients with Parkinson's disease

Introduction: We aimed in the present study to investigate the effects of pulmonary rehabilitation on the respiratory parameters and effort capacity, quality of life (QoL), anxiety, depression, and sleepiness in the patients with Parkinson's disease (PD).

Conclusion: Results of our study indicated that PPT is effective significantly and positively especially on the non-motor complications, by increasing effort capacity and walking distance in the patients with PD.

Another important reason of inactivity in PD patients is the respiratory complication that leads to decreased effort capacity. Respiratory involvement with PD could occur through both peripheral and central mechanisms. Motor manifestations such as rigidity, tremor and weakness affect the upper airway and the respiratory pump muscles. Non-motor brain stem involvement has effect at the level of respiratory control [5]. In addition to these ventilatory abnormalities, evidences of a high incidence of obstructive and restrictive pulmonary dysfunction were found [6,7]. Exercise therapy poses the potential to improve many clinical domains of PD [8]. Indeed studies on PD have shown improvements of muscle strength, cardio respiratory fitness, balance, walking performance, and QoL, following exercise therapy [2]. In the previous studies, it has been reported that pulmonary rehabilitation improves the PFT parameters, and increases the scores of six-minute walk test (6mWT) [9,10]; however, as far as we know, a study is not available indicating the effects of pulmonary rehabilitation on the emotional status and sleep quality.

In our study, we aimed to investigate effects of the increased effort capacity and mobilization by pulmonary physiotherapy (PPT), on the general and Parkinson-specific life qualities, emotional status, and sleep quality.

From April 2014 to April 2015, 123 consecutive PD outpatients were recruited at regular check-ups at the Department of Neurology Clinic, Sakarya University Medical Faculty (Turkey). The diagnosis was made according to the United Kingdom Parkinson's Disease Society Brain Bank criteria. Participants were evaluated for disease severity using the Unified Parkinson’s Disease Rating Scale (UPDRS) [11] in the “on-state” and Hoehn and Yahr Scale (HYS) [12]. All patients were clinically stable (without fluctuations or dyskinesia). Accompanying malignancy, congestive heart failure, insulin-dependent diabetes mellitus, inflammation, infection, neurological dysfunction, severe depression, dementia and other conditions that could influence the mobility status were excluded from the study. Pulmonary system was evaluated in detail in all patients, by a specialist in chest diseases. All pulmonary function tests (PFT) were carried out by the same technician in accordance with the directives of the American Thoracic Society.

Patients with asthma-COPD and obstructive pulmonary disease were not included in the study. Cases, who have previously participated in an exercise program, and those receiving drugs for anxiety, depression and sleep disturbances, were also excluded. The remaining 45 patients with mental and cognitive status suitable for physiotherapy (mini mental state examination ≥ 24), have undergone 6mWT according to the standard protocol [13]. The level of quality of life was assessed by means of the quality of life scale in Parkinson’s Disease Questionnaire (PDQ-39) [14]; it is a 39-item self-report questionnaire which measures eight dimensions of health, namely mobility, activities of daily living, emotional wellbeing, stigma, social support, cognition, communication, and bodily discomfort. Higher score of PDQ-39 indicates poorer QoL in PD patients. This scale evaluates the effect of Parkinson’s disease on the quality of life, within the last one month.

For evaluation of quality of life (QoL), Short Form-36 (SF-36) was used. The SF-36 Health Survey questionnaire was used to measure health-related QoL [15]. It is composed of 36 items, addressing eight dimensions of QoL: physical functioning, physical role limitations, bodily pain, general health, vitality, social functioning, emotional role limitations and mental health. These scores range from 0 to 100, with higher scores representing better health quality. For evaluation of emotional status, Beck Anxiety Inventory (BAI) and Beck Depression Inventory (BDI) were used [16,17]. The BAI and BDI are widely used, 21-item standardized self-administered questionnaires that measure various symptoms of anxietydepression and describe the somatic and cognitive-affective symptoms on a four-point scale that ranges from 0 to 3. A higher score indicates a more severe depression. The sleep quality was assessed by the Epworth Sleepiness Scale (ESS) [18]. Epworth 0-10 was categorized as mild, and over 10 was categorized as severe.

Patients were administered 12-week exercise program by an experienced pulmonary physiotherapist. During the exercise program, pursed lips pulmonary, and diaphragmatic pulmonary exercises were applied, after training. PFT, 6mWT, QoL, UPDRS, HYS, PDQ-39, SF-36, BAI, BDI, and ESS were evaluated before and after the exercises. Six of the patients were excluded from the study because of the alteration in treatment dose during the follow-up period, three cases were excluded due to the inability in applying physiotherapy program, and two cases were excluded because of not attending to controls. The study was completed with the participating 34 patients. Ethical approval for the study was granted by the Sakarya University Ethics Committee. All patients were informed about the aim of the study, and written consent was obtained.

Statistical analyses were carried out using the SPSS/PC software (version 21.0). Descriptive statistics were presented as mean values with a standard deviation for numeric variables. The paired-samples t-test for comparison of parametric data among groups. The limit for statistical significance was accepted as p<0.05.

Of the original sample of 129 PD patients, 45 patients met the inclusion criteria. An additional 11 patients were excluded because of missing data. This resulted in a total sample size of 34 patients. The demographics and clinical features of patients are listed in Table 1.

Table 1. Demographic and clinical characteristics of the subjects. 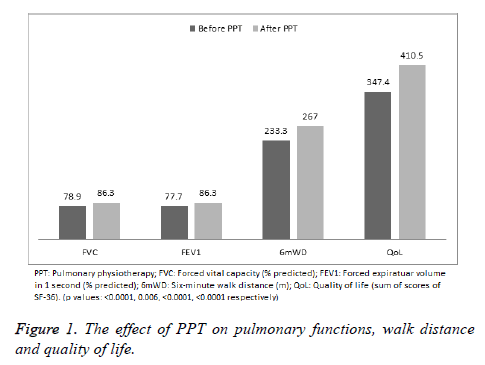 Figure 1. The effect of PPT on pulmonary functions, walk distance and quality of life.

The overall life quality and the anxiety-depression scores of patients improved significantly following PPT. Results are illustrated in Table 2.

Table 2. The effect of PPT on clinical characteristics, emotional status and sleep quality of subjects.

Likely, our study is the first to prospectively demonstrate improved QoL, anxiety, depression, sleepiness, 6mWT, spirometry and UPDRS in individuals with PD after participation in a Pulmonary rehabilitation program. Our results have confirmed the views that respiratory parameters of the patients would improve, their effort capacities would increase resulting in decreases of dependency and social isolation, which might improve quality of life in these cases, and additionally anxiety-depression and sleepiness might decrease, following a PPT program. Anxiety and depression exists more frequently in the patients with PD, compared to the general population [19], and this affects life quality of the patients negatively [20]. In large serial studies, rates of anxiety and depression have been reported to be 45%-51% and 35%-45%, respectively [19,21,22]. We determined signs of anxiety and depression in 64.7%, and 41.1% of the patients in our study, respectively.

The mechanisms of mood disorders in the patients with PD have not been clarified yet [23]. Possessing a chronic and progressive disease may lead to anxiety and depression, and debilitating and unpredictable motor symptoms may also contribute to this [24]. However mood disorders in PD cannot be solely explained by the psychological response to the diagnosis of PD, since anxiety and depression are reported more frequently in PD compared to patients with other similarly chronic and debilitating diseases [23]. The dopaminergic neurotransmitter alterations can be directly related to anxiety symptoms in PD [23]. Furthermore studies suggest possible associations with both serotonergic and noradrenergic systems and white-matter abnormalities. On the upshot it is largely attributed to a combination of neurobiological and psychological causes [23]. Whatever the cause may be, PPT was determined to affect anxiety and depression significantly in our study, and rates of anxiety and depression decreased to 44.1% and 32.3%, respectively following PPT (p<0.001). We could not reach a study in the literature evaluating the effect of PPT on psychological status. However in the previous studies, activities like exercising and dancing were shown to decrease anxiety and depression [25-27]. This fact can be explained by positive effect of the increased capability of activity, on the mood.

Insomnia and excessive daytime sleepiness (EDS) is an increasingly recognized problem in PD, and it causes clinically significant problems and impairs the quality of life of patients [28,29]. EDS affects up to 50% of Parkinson’s disease patients and is 15-fold more frequent in PD patients than in the agematched healthy subjects [30]. Epworth Sleepiness Scale has been reported to be reasonably well to evaluate excessive daytime sleepiness in PD [31]. In our study, ESS score was found to be 8.82 prior to PPT, and 41.1% of the patients were found to exist with EDS. Following PPT, the mean ESS score decreased to 7.26, and rate of EDS decreased to 20.5%; the differences were found to be significant (p<0.0001). In a recent general population-based study, exercise was shown to exert positive effect on EDS [32]. However a study evaluating the effect of PPT is not available yet. Besides physical activity, PPT may help to decrease sleep disturbances also by decreasing anxiety, and by its positive effects on the respiratory parameters. Quality of life has become an increasingly important parameter in the evaluation of the efficacy of interventions in patients suffering from Parkinson's disease. Multiple studies, using a variety of approaches and methods, have shown a reduction of QoL in PD patients [33]. In our study, overall life quality and also Parkinson-specific life quality improved significantly after the PPT (p>0.001 and p<0.0001, respectively).

Systematic reviews have indicated non-motor symptoms [including depression and anxiety] as major factors in determining health-related quality of life, progression of disability, and home nursing in PD patients [34]. A significant relationship between postural instability, gait dysfunction dominant symptoms and anxiety is also observed [24]. Furthermore exercise was indicated to increase PDQ in the randomized studies [35], and thus increased walking distance and decreased anxiety may improve quality of life. UPDRS score decreased significantly following PPT in our study; this decrease may be explained by the decreases in anxiety and depression in these patients. Negative effect of anxiety on the motor symptoms is well-known [24]. In the metaanalyses, exercise has been determined to decrease depression in the patients with neurological disorders [36]. Moreover Klusevky et al. have shown that treatment of depression in PD patients by sertraline exerts positive effects on motor functions, and improves UPDRS score compared to basal level [37]. Recent studies also demonstrated that exercise decreases UPDRS scores [35].

Respiratory function parameters were shown to be impaired in PD, compared to normal population [7,38]. However number of studies investigating the effects of pulmonary rehabilitation programs is considerably limited. Koseoglu et al. have reported that some of the PFT parameters improve with PPT [9]. Significantly different FEV1 and FVC values determined in our study may contribute to the literature in this regard. In PD patients, the reduction in walking capacity is an important factor that negatively affects the perception of QoL [39]. In the study of Cagusi et al., in addition to improvements in the scores of PDRS-III, BDI and PDQ, a significant increase in walking distance was observed with the tailored exercise program [40]. In our study, walking distance increased about 35 m with PPT, and this difference was significant. This increase may be the main cause of all improvements in the patients. There are several limitations to this study. The lack of a non-physiotherapy control group does not allow direct comparison of PPT versus no PPT. Furthermore, we did not have a follow-up period to determine whether the effects of PPT lasted over time.

Evidences from published trials and guidelines have suggested potential benefits of physiotherapy for patients with Parkinson’s disease [41,42]. Referral rates for physiotherapy in Parkinson’s disease are low [41], and the main objective of rehabilitation in PD is usually to recover motor function; however our study has demonstrated that PPT application in PD is also effective in decreasing the non-motor symptoms (including anxiety, depression, and sleepiness), and in increasing the quality of life. As a conclusion, addition of pulmonary exercises to the physical therapy program of the patients with Parkinson’s disease, suggests potential benefits.

Design: BDG, YA; data acquisition: BDG, YGA, ACG; DD, SB; statistical analysis: YA; first draft of the manuscript: YA. All authors reviewed and commented on the final manuscript.

The authors declare that they have no conflicts of interest in relation to this article.