Objective: To observe the effect of the novel immunosuppressant FTY720 on inflammatory response in brain tissue of rats with brain injury and to explore its related mechanism.

Methods: 60 Wistar rats were randomly divided into control group, sham-operated group, model group and treatment group with 15 in each group. Wherein the sham-operated group were only drilled to the bone without fluid-percussion. Feeney method was used in the model group to set up severe brain injury of rat models. Former the treatment group model established in 0.5 h, FTY720 (1 mg/kg) were administrated by intraperitoneal injection. Then the cerebral cortex of rats was HE-stained to observe the inflammation response. TNF-α (TNF-alpha), IL-1β (Interleukin-1β), and IL-6 (Interleukin-6) levels in tissue were determined with ELISA assay; Immunohistochemical was used to detect the OX-42 expression of microglia; Pro-caspase 3, pro-caspase 9, and NF-κB p65 subunit levels in the nucleus were measured by western-blotting; TUNEL (transferase-mediated deoxyuridine triphosphate-biotin nick end labelling) assay was applied to inspect apoptosis of neuronal cells.

Results: HE staining showed the rat brain cortex of the control group and the sham-operated group were normal, but rats in the model group exhibited significant brain haemorrhage, and alleviated haemorrhagic symptoms were discovered in FTY720 treatment group. Compared with the normal group and the sham-operated group, IL-1β, IL-6 and TNF-α, the pro-inflammatory cytokines, displayed increased secretion in the model group. Following FTY720 treatment, cytokines above were significantly reduced, but no obvious effect on the expression of OX-42. Pro-caspase 3, pro-caspase 9 and p65 in the nucleus were expressed upward after brain injury, whereas the three proteins decreased with FTY720 treatment. Cell apoptosis was significantly increased following with brain injury in rats, while FTY720 could ameliorate the apoptosis.

Conclusions: FTY720 plays a protective role on brain injury in rats through the potential mechanism of inflammation and apoptosis inhibition.

Therefore, to discover a drug to inhibit the inflammatory response and protect nerve cells on a certain extent have important values on treatment of traumatic brain injury. FTY720, a structure-modified compound of the isolate of Cordyceps sinensis, is a synthetic immunosuppressant with low side effects and two-way adjustment to immunosuppression, that has started for the treatment of multiple sclerosis and kidney transplant rejection response [2,3].

This study is aimed to observe the effect of FTY720 on tissue inflammatory response of brain injury in rats with assays in vitro, and to explore its mechanism so as to lay a solid foundation for further clinical research.

After soaked with 30 g/L glutaraldehyde for 2h, the cortex tissue of rats was rinsed with PBS for 12 ~ 24 h. Then the tissue was fixed with 1 g L osmium tetroxide for 2 h, dehydrated conventionally with ethanol and acetone step by step, finally infiltrated and embedded with epoxy resin. The ultrathin sections with thickness of 75 nm were obtained with a slicer for HE staining, followed with observation of infiltration of inflammatory cells under the microscope.

After grinded, 50 mg of brain tissue was placed in a centrifuge tube for homogenization with a high-speed homogenizer in the bath. Centrifuge it for 10 min at 20000 r/min, then extract the supernatant which was detected for protein concentrations of IL-1β, TNF-α and IL-6 with ELISA assay based on the method provided in the kit. The determined results were expressed in pg/mg.

The rat cortical tissue was added 300 μL tissue lysate to get total cellular protein or nuclear proteins, next homogenized at low-temperature with the ultrasonic cell cracker for supernatant extraction. Its protein concentration was determined by BCA method. The equal volume of 2 × loading buffer was added to the sample for SDS-PAGE. Then the sample was transferred onto nitrocellulose membranes at constant voltage of 90 V/40 min. At 1h after blocking with 5% skim milk, the addition of anti-pro-caspase 3, pro-caspase 9 or p65 polyclonal antibody was conducted. After shaken 1 h or overnight with the shaker, the sample was washed three times with TBST, and then incubated with secondary antibody. At last, ECL reagent was used for visualization; the sample was exposed and scanned with a scanner. The results were analysed by Image-Plus.

In situ Transferase-Mediated Nick End Labelling (TUNEL) assay was adopted to detect apoptosis of cortical neuronal cells. Cell nucleus with brown or brown-red staining was defined as positive ones. Calculate 10 high magnification views in Olympus-CH optical microscope, and count 100 cells in each field view. A total of 1000 cells were calculated for the average positive rate (%).

After deparaffinised hydration, antigen repairing for exposed epitopes and the elimination of endogenous peroxidase, the brain tissue was blocked for non-specific protein, and added with OX-42 polyclonal antibody overnight. Following PBS washing for 10 min, the tissue was dripped with secondary antibody and incubated for 30 min at room temperature. Once again PBS washing for 10 min, DAB chromogenic, hematoxylin redyeing, conventional dehydration and sealing piece were preceded step by step.

The statistics was analysed with SPSS/11.0, expressed in (mean+standard deviation). Variance analysis was applied in the comparison of multi-groups, while LSD method in intragroup comparison.

The effect of FTY720 on cortex inflammatory response

HE staining showed that the cerebral cortex of the control group (con) was almost normal, the sham-operated group (sham) had mild bleeding to quite slight extend. However, the large haemorrhage can be seen in the rat cortex in the traumatic brain injury model group (model). After treatment with FTY720, the blood symptoms in the rat cortex were significantly reduced as shown in Figure 1.

Compared to the normal group and sham operation group, inflammatory factors including IL-1β, IL-6 and TNF-α in rat cortex of the model group had the increased secretion; but after treated with FTY720, the secretion of these factors were reduced as shown in Figure 2.

The determination of OX-42 in microglia by immunohistochemistry

Figures 3A and 3B demonstrated that the brain tissue in the control group and sham-operated group had a small amount of microglial cells expressing OX-42 positively. After modelling, compared with the control group and sham-operated group, there was no significant difference in OX-42 expression of microglial cells in rat brain tissues in the treatment group (P>0.05). 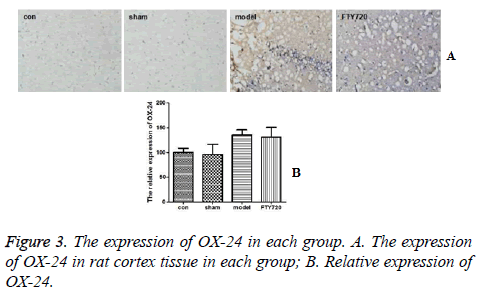 In control group and sham-operated group, the expression of pro-caspase 3 and pro-caspase 9 was expressed in a certain degree, which was significantly increased in model group. But the expression was obviously decreased after FTY720 treatment. In addition, the content of NF-κB p65 in the rat’s nucleus in the control group and sham-operated group was low, while it was high in the model group. After FTY720 treatment, p65 protein was reduced significantly to the control group level as shown in Figure 4.

The effect of FTY720 on apoptosis

Cell apoptosis displayed fewer occurrences in the rat’s brain in the normal group and sham-operated group based on the TUNEL results. After traumatic brain injury, the rate of apoptosis was significantly increased. However, the administration of FTY720 could alleviate the cell apoptosis as shown in Figure 5. 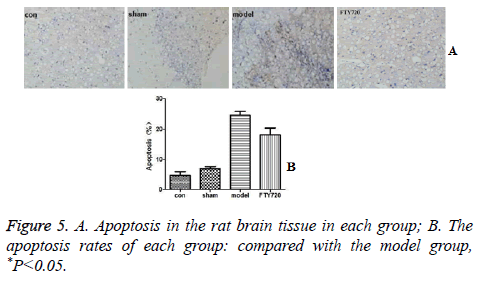 Figure 5: A. Apoptosis in the rat brain tissue in each group; B. The apoptosis rates of each group: compared with the model group, *P<0.05.

Phospholipids, the common components of cell membrane, are widely involved in cell growth, proliferation, and signal transduction and so on. Ceramide and sphingosine are associated with cell apoptosis, while sphingosine 1-phosphate (S1P) has the power on the promotion of cell growth and proliferation. This reverse regulation between ceramide/ sphingosine and S1P comes into being a "sphingolipid rheostat", controlling the metabolism pathway of sphingolipid. Sphingosine kinase (SK) is the rate limiting enzyme in the catalytic synthesis of S1P, and regulates the phospholipid synthesis together with other sheath lipid metabolic enzyme [1,5]. FTY720, a novel synthetic immunosuppressive agent, is phosphorylated by SK2 in the cell to transform to biologically active (s)-FTY720-P which can interact with S1P-G proteincoupled receptor to interfere lymphocyte transportation and prevent T cells release into the blood from secondary lymphoid organs, as well as play a role in immune suppression [6]. Some studies indicated that FTY720 can reduce brain oedema in rats with cerebral haemorrhage and improve brain function, so it is considered as a potential neuroprotective drug [7]. This study showed that FTY720 could bring down the accumulation of inflammatory cells in cortex of traumatic brain injury rats, So as to alleviate the brain inflammation response.

Microglia are innate immune effector cells in the brain that has the dual role of neurotoxicity and injury repair after cerebral haemorrhage. However, the excessively active microglia can directly contact with the nerve cells to phagocytize damaged ones; on the other hand, microglial cells secret and release a series of inflammation related factors, such as oxygen free radicals, IIL-1β, TNF-α and NO which can lead to degeneration and death of peripheral neuronal, even secondary brain injury [8]. The research results show the treatment with FTY720 can effectively reduce the secretion of inflammatory cytokines including IL-6, IL-1β and TNF-α in brain tissue and, suggesting that FTY720 can alleviate the inflammatory response in cerebral cortex in traumatic brain injury rats in a certain extent. A marker of microglia, OX-42, is the reflection of the proliferation of microglia in central nervous system, that can indirectly reflect the inflammatory state in the body [9]. This study announced that FTY720 treatment had no significant effect on the expression of OX-42, indicating that FTY720 did not affect the proliferation of microglia to increase the risk of secondary inflammatory injury.

Pro-caspase 9 and pro-caspase 3 are inactive precursors of the apoptosis protein caspase 3 and caspase 9, respectively. Once apoptosis signal stimulation, they will be enzymatic cleavage into active two-polymers, caspase 3 and caspase 9. Caspase 3 is an apoptosis executor, which can directly degrade the intracellular structural proteins and functional proteins, [10] while caspase 9 is an apoptotic promoter. Once stimulated by the apoptotic signal, caspase 9 is activated by self-splicing, and triggers the caspase cascade reaction [11]. Normally, nuclear factor κB is present in the inactive form in the cytoplasm; when subjected to various exogenous stimuli, the p65 subunit enters the nucleus and binds to DNA to influence the expression of the corresponding protein [12]. The results prove that pro-caspase3, pro-caspase9 and NF-κB protein exhibit increased expression after brain injury, suggesting that the occurrence of apoptosis and inflammation in the brain; after treatment with FTY720, the three proteins display different degrees of call back, indicating FTY720 can reduce apoptosis and inflammation after traumatic brain injury. In addition, the results of TUNEL are also confirmed that FTY720 can reduce the apoptosis of cerebral tissue, so as to protect the nerve function of rats with traumatic brain injury.

In conclusion, the strengthened immune response, the activation of glial cells, the acceleration of inflammatory response, increased apoptosis and impaired neurological function are emerging after brain injury. FTY720 as a novel immune inhibitor can reduce the secondary brain inflammation and the apoptosis of nerve cells in a certain extent, which can alleviate the brain damage and protect the nerve function. In the following study, we will concentrate further study on the upper signal pathway of the caspase and NF-κB.

This work is financially supported by the Experimental Animal Platform Plan of Zhejiang Province of China (Grant No. 2014C37029 and 2015C37082).