The effect of Smilax calophylla on testicular 11?-hydroxysteroid dehydrogenase activity and plasma testosterone levels in rats

Elevated glucocorticoid levels in stressful conditions ex-ert detrimental effects on male reproductive function, by lowering the levels of testosterone (T) [1,2]. This is partly attributable to the direct inhibitory effects of glucocorti-coids on Leydig cells steroidogenesis [3,4]. Leydig cells contain glucocorticoid receptors (GR), thus indicating that they could be the target cells for glucocorticoid [5]. Low T production following stress or excess glucocorticoids has also been found to be associated with the reduction in the testicular 11 β -hydroxysteroid dehydrogenase (11 β -HSD) activity [6].

Smilax calophylla “Akar dawai”, is an indigenous herb and the decoction of Akar dawai rhizome is traditionally consumed by local Malaysian folks as a male sexual tonic. Furthermore, extract of Akar dawai rhizome has been used as the treatment of gonorrhoea and oedema. The Smilax plants are reputed by Malays to have a potent aphrodisiac property [14] but the belief is still lacking of scientific supports. Studies on several Smilax plants re-vealed that the major components of the plant rhizomes are steroidal glycosides [15,16]. Moreover, some other Smilax species are shown to have an anti mutagenic [17], anti bacteria [18], anti mycotic [19] and hypoglycemic effects [20]. However, to date no scientific study has so far been carried out on Akar dawai.

Therefore, the aim of the present study was to determine the effects of Akar dawai rhizome water extract on the plasma levels of T as well as on the testicular 11 β -HSD activity in corticosterone-treated fertile male rats.

Adult male Wistar rats of 200-250g body weight (BW) were used. Rats were randomly assigned into the treatment groups. Six to twelve rats were assigned into each group. Two to three control rats were housed together with their corresponding treated rats. Rats were housed at a temperature of 27-29°C with 12:12 hour dark- light cycle. Control rats received either intra muscular injection of 0.1ml olive oil or 0.5ml normal saline orally. Steroid was dissolved in olive oil and injected (0.1ml) intramuscularly daily, while the water extract of AD was gavaged (0.5ml) daily.

The Medical Research and Ethics Committee of National University of Malaysia (UKM) had approved the method-ology used in the present study.

After the rats were sacrificed, testes were removed, dissected on ice, homogenized with Krebs solution containing glucose on ice, and 250 l homogenate was assayed for 11 β -HSD activity as described previously [22]. The assay was performed by incubating tissue homogenate with 12nM 3H-B and 200 M NADP at 37°C for 10 minutes. Then the reaction was stopped and the steroids were extracted by the addition of ethyl acetate. After thin layer chromatography, the steroids were identified under ultraviolet light and the radioactivity was determined in liquid scintillation counter.

The 11 β -HSD activities were expressed as percentage conversion of corticosterone to 11-dehydrocorticosterone. Incubation time and dose used in the enzyme assay were according to the previous study on time and dose depend-ant curves and most appropriate under that same circumstances that have been reported [23].

Five minutes before sacrifice, rats were given diethyl ether anesthesia and 3-4ml of blood was collected in heparinized tube at the time of sacrifice. Ether was used to minimize marked fluctuation of plasma T levels [24]. Plasma levels of T were estimated by using the commercial RIA kit (Coat-a-count, Diagnostic Products Corp. CA) [12].

The data for 11 β -HSD oxidative activities were expressed as mean ± standard error of mean (SEM) while plasma levels of T were expressed as mean ± 95% confidence interval (CI). Data were analyzed using the Statistix Programme. Differences between groups were analyzed by analysis of variance (ANOVA) and student t-test. The differences were considered significant at p<0.05 [25].

The oxidative activity of 11 β -HSD was significantly decreased (p<0.001) following CORT treatment for seven days compared to that of the control. Similarly, a signifi-cant reduction was noted on the enzyme activity (p<0.05) after seven days of AD (dose: 8mg/kg BW) treatment. However, a concomitant treatment of AD concurrently with CORT increased the 11β -HSD activity (p<0.001) compared to CORT treated group (Fig. 2). 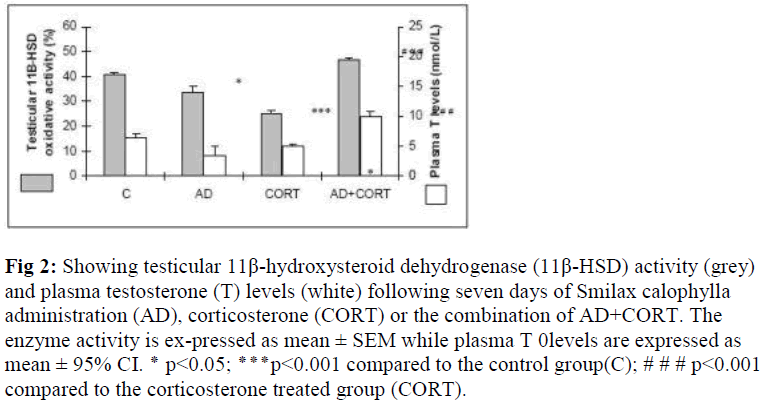 Chronic exposure to high glucocorticoid levels following stress suppresses plasma levels of T [2] either by its direct inhibitory effect on T production or by suppressing luteinizing hormone (LH) levels [26]. In fact, the degree of inhibitory effect of glucocorticoid on the testicular steroidogenesis is determined by the 11β-HSD oxidative activities, intra cellular glucocorticoid concentration and the number of GR [27]. It has been documented that an excess CORT inhibits LH-stimulated steroidogenesis by decreasing the number of LH receptors in the testis. The effect of CORT on T biosynthesis in Leydig cell is found to be a receptor-mediated mechanism [3]. Lowering of plasma levels of T in stressed and CORT-treated rats could also be associated with the reduction in testicular 11β-HSD activities [6]. Previous studies also showed that CORT inhibits the testicular 11β-HSD activity [28] as well as plasma levels of T [9,27]. However, the degree of inhibitory effect of CORT on steroidogenesis increases with the level of suppression of the 11β-HSD activity [11].

Testicular 11β-HSD activities have a significant correla-tion with the plasma levels of T in some treatments where the suppression of 11β-HSD activity leads to a reduction in plasma levels of T [12]. In fact, studies using rat tissues showed that testicular Leydig cells of the rats contain the highest 11β-HSD activity compared to other tissues [23]. Thus, by modulating glucocorticoid concentration in the testis, 11β-HSD is proposed to play a pivotal role in protecting the testis from the deleterious effects of glucocorticoid especially on steroidogenesis [9,11]. We therefore, decided to look only at the oxidative activity of this en-zyme.

In the present study, AD was given in combination with CORT for seven days. Interestingly, it was recorded that AD could overcome the suppressive effect of exogenous CORT (2.4mg/kg BW) in rats. The effect could be the result of a competitive interaction between the two on the same receptors in the testis. We, therefore, suggest that AD possibly acts as a partial glucocorticoid receptor ago-nist because AD treatment alone for seven consecutive days also showed the same effect as CORT where it reduced testicular 11β-HSD activity. Based on the above findings, we are tempted to believe that AD might be use-ful in counteracting the adverse effect of stress on normal testicular functioning.

We wish to thank Prof. Dr. Johari Mohd. Saad, Faculty of Medicine, University of Malaya for the supply of Smilax calophylla water extract. The present work was supported by IRPA research grant 06-02-02-0081. A critical review of this manuscript by Professor Dr Amar Chatterjee, Fac-ulty of Medicine, UiTM, is highly appreciated.