Objective: Coronary heart disease has become the third major disease threatening human health in China. CABG is the main treatment method, and has better treatment effect. However, the psychological status of patients will have some negative emotions during the perioperative period of CABG due to many factors, such as their own diseases and environment, which will affect the therapeutic effect of CABG seriously. In order to study the perioperative effect of psychological intervention on the psychological and quality of life of patients after CABG, the second people's hospital of our province in February 2016, 8 months were set to contrast observation group.

Methods: The intervention group and the control group were set up according to whether psychological intervention was carried out. There were 40 patients in the two groups. SAS, SDS and SWLS were used to make quantitative analysis from two aspects: psychological status and quality of life.

According to incomplete statistics, cardiovascular disease has become the leading cause of population death in China. Nationwide, nearly 300 million people have varying degrees of cardiovascular disease. We can see according to the medical statistics in recent years that one of the three leading causes of death among the elderly is coronary heart disease CHD [1]. With the deepening of aging in China, the number of elderly deaths caused by coronary heart disease increases year by year, which poses a serious threat to the health and safety of the population in China. The treatment of coronary heart disease is mainly based on interventional therapy, and most of which are performed coronary artery bypass grafting. The operation is safe and effective, and the cost is relatively low, which is more acceptable to the patients. Advances in medical technology and advances in technology have further reduced the risk of coronary artery bypass grafting, making the treatment the first choice for coronary artery disease [2]. However, because of the lack of awareness of coronary heart disease in our country, on the one hand, it reflects the possible risks of surgery, and on the other hand, it worries about the cost of treatment. This psychological change will be concentrated in perioperative period, and the degree of psychological stress in perioperative period is higher, causing anxiety and depression in the patient's heart. This will lead to an increase in the risk of surgery, which is not conducive to the prognosis of patients, seriously affecting the quality of life of patients after surgery [3]. Previous studies have shown that the factors affecting the quality of life in patients with coronary heart disease in recent years are low, including disease factors, social factors, psychological factors and their own bad habits. And the most important factor is psychological factors. As long as it can effectively improve the psychological status of patients, it can greatly improve the postoperative quality of life of patients [4]. 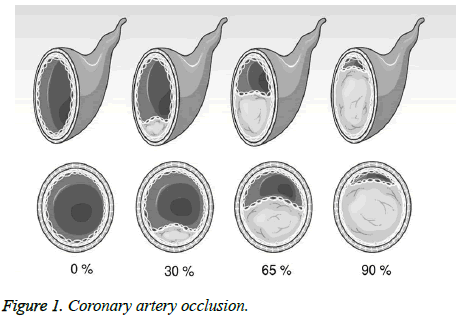 ECG, coronary angiography, radionuclide examination and Xray tomography can be used in the diagnosis of coronary heart disease [9]. One of the most reliable diagnostic methods is coronary angiography, which can understand the specific shape of the coronary artery directly so as to determine the extent of the patient's lesions to observe the presence of thrombosis, calcification, and intimal dissection and so on. The characteristics of the upper or lower limb femoral artery puncture catheter can be used to explore the left coronary artery or right coronary artery insertion, and injection of contrast agent so that it can be developed. Thus, the trunk and the branch lumen of the left and right coronary arteries can be clearly displayed. Based on this, the doctor can determine whether there is a narrow lesion, and analyze the corresponding vascular wall and the location and severity of the lesion, and then select the appropriate treatment plan [10]. At present, coronary angiography is suitable for patients with coronary heart disease, angina pectoris, and chest tightness and chest pain symptoms. Coronary angiography is especially true in patients older than 50 who require major surgery and unexplained electrocardiographic abnormalities. However, coronary angiography is not suitable for arrhythmias, uncontrollable hypertension, contrast agent hypersensitivity, and acute myocarditis [11].

The most common and effective treatment for coronary heart disease is coronary artery bypass grafting (hereinafter referred to as CABG). It can realize the recanalization of blood vessels and improve the blood supply of the coronary arteries to the heart. To some extent, it alleviates the angina pectoris symptoms in patients with coronary heart disease, and improves the quality of life after the operation greatly [12]. You can see in Figure 3 that the coronary artery is the most important blood vessel in the nourishing heart. Coronary artery bypass grafting is needed when one or more of the coronary arteries are severely lacking in blood supply due to obstruction. Doctors can choose special wire conduits for heart interventional treatment. By gentle operation, it can completely pass through the coronary artery which has completely blocked the lesion, or use the collateral vessels to open the obstructed coronary artery, thus improving the blood flow of the coronary artery. With the development of modern science and technology and the progress of medical technology, the success rate of comprehensive interventional treatment is higher and higher, and it has reached about 85% [13]. But we need to make a comprehensive analysis of each patient and need a more accurate assessment of the type of cardiovascular disease, age, comorbidities, and so on to be able to choose a more targeted treatment in the specific treatment process. In addition to surgical treatment, we can also be treated with medication, which mainly contains anti platelet drugs, lipid-lowering drugs, anti-atherosclerosis drugs and anti-angina drugs, such as aspirin, atorvastatin, nitric acid and other drugs [14]. 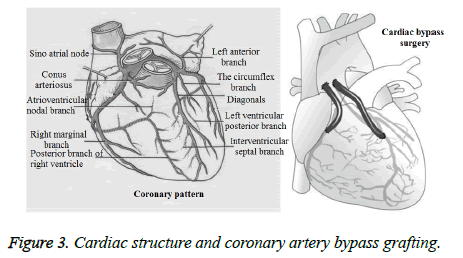 In order to improve the psychological status of patients with coronary heart disease and improve the postoperative quality of life, you need to change in patients with coronary heart disease after surgical intervention to negative cognition to the disease so as to change their original cognition of their own disease. This perception is related to the body's performance directly, such as faster heartbeat and higher blood pressure. And when people know more clearly about an unknown thing, there is a clearer expectation of future results. This can relieve the psychological stress reaction and reduce the degree of physiological disorder to a certain extent [18]. Under normal circumstances, coronary heart disease patients will undergo preoperative and postoperative care, which includes both psychological care intervention, but also includes psychological care intervention. Before surgery, when patients are experiencing pain, they need a quiet rest, and try to avoid excessive fatigue and emotional agitation. We should offer the basic knowledge of coronary heart disease to the patient so that it has a certain understanding of the attack and prevention of angina pectoris. For patients with anxiety, patients should be given adequate psychological care, and encourage them to the heart of real feelings and ideas so as to provide targeted guidance and help. We should disperse the patient's attention and let them relax, and explicitly inform the adverse effects of emotional instability on heart disease [19]. After the operation, patients need to monitor the condition, observe the patient's skin color, body temperature, urine color and other characteristics of the body. We should pay attention to the fluctuation of the lower limb artery, and observe the change of the organs after regular chest X-ray examination and B ultrasonic examination. In psychological intervention, it is necessary to understand and respect patients adequately, and give them adequate comfort and explanation to help patients with the author's basic and life care, especially for patients to create a good sleeping environment [20]. Doctors should communicate with the patient's family members actively so that they can do a good job of psychological care of patients and patient can have a good and stable mood to cooperate with the treatment. The measures of basic nursing care and psychological nursing for patients with coronary heart disease after CABG are detailed as shown in Figure 4. Therefore, the purpose of this study is to investigate the perioperative effect of psychological intervention on the psychological and quality of life of patients after CABG. 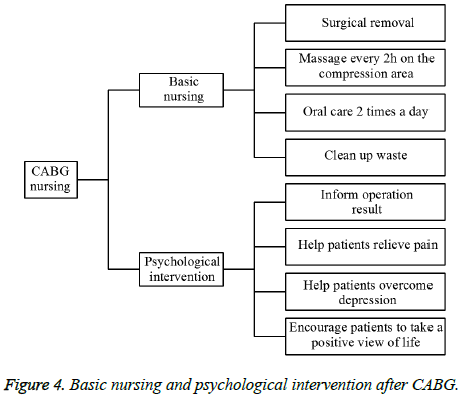 The inclusion criteria for patients are as follows: (1) Age range is from 28 to 68 years of age. (2) Patient has been diagnosed with coronary heart disease, and has the condition of CABG operation after a variety of medical means. (3) Have certain cognitive ability and learning ability, and can accept psychological intervention treatment. (4) The research and control experiments are carried out through the study of patients' unification, and the doctor's treatment and the study are fully coordinated in the course of the study.

There are exclusion criteria: (1) There are other serious complications. (2) Patients and their families do not agree with this study, which has a very strong conflict with the study. (3) Use of psychotropic drugs, complicated by neurological diseases. (4) Patients who has exited because of an accident or cause during the course of the study.

When the intervention group and the control group are evaluated postoperatively, they are carried out from two aspects: psychological impact and quality of life. We compare and analyze through quantitative analysis. Among them, the psychological impact assessment is assessed by the self-rating Anxiety Scale (hereafter referred to as SAS) and the self-rating Depression Scale (SDS). 20 items are set in each of the two tables. Each item was rated four, 1, 2, 3, and 4. The higher the score, the worse the psychological condition is. All of the scores after the cumulative scores multiplied by the coefficient 1.25 and rounded overall score. Psychological status is assessed according to different scoring intervals according to different intervals [0, 50], [50, 60], [60, 70], [70, 100]. According to the scoring, SAS interval are normal, mild anxiety, moderate anxiety, severe anxiety, and SDS interval are no depression, mild depression, moderate depression, and severe depression according to the scoring. Details are shown in Table 3. SAS and SDS scores are analyzed before operation, 12 h and after 72 h operation respectively.

The life satisfaction scale (SWLS) is used for quantitative analysis so as to comprehensively evaluate the quality of life of patients in the evaluation of life quality. It is suitable for different age groups, and has better applicability. SWLS is divided into 5 items. Each item is rated according to level 7, with scores ranging from 1 to 7 points, which are more satisfied with the quality of life in some way progressively. The overall scoring interval was [5, 35]. The higher the overall score, the better the quality of life of the patients. Life satisfaction is only statistically analyzed after operation, and the control group and the intervention group are compared and analyzed. All data are analyzed using SPSS software. The level of significance is set as 0.05. When P<0.05, which shows that there is significant statistical significance. 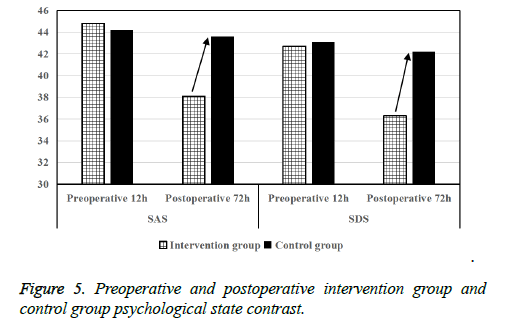 Table 4. Analysis of the psychological state of the intervention group and the control group before and after operation.

Table 5. Comparison of quality of life in the control group and the intervention group.

The work presented in this paper is supported by the project of Handan science and Technology Bureau, Project Name: clinical study on chronic pain diagnosis and treatment based on health, Item number: 0920108109.