Nogo-A protein is a growth axon inhibitory molecule associated myelin, and it is widely distributed in oligodendrocytes and neurons in the Central Nervous System (CNS). Nogo-A is one of the most important inhibitors of nerve regeneration after central nerve injury in mammals [1,2]. As well as being a strong axon growth inhibitory factor in the CNS, both in vitro and in vivo experiments have shown that it has close relationships with the regeneration of CNS neural axons [3]. Ischemia in the CNS and the inhibition of nerve cells are related to axon inhibition of Nogo-A [4]. Nogo-A expression has been investigated in various conditions including cerebral ischemia, spinal cord injury, and injury of the optic nerve, and it has been reported that Nogo-A expression is significantly increased at 25 d after arterial occlusion [5].

Male Sprague-Dawley (SD) rats (age 12-14 w, weight 370 ± 30 g) were provided by Sichuan (certification number: SCXK (chuan) 2014-24), and had been bred in the Laboratory Animal Unit of the West China Hospital of Sichuan University. Rats were adapted for 1 w, they had unrestricted access to food and water, and there were 5 rats in each cage (room temperature 20 ± 2°C, relative humidity 40-60%). The rats were fasted for 12 h prior to experimentation, but they had unrestricted access to water. This study was carried out in strict accordance with the recommendations in the Guide for the Care and Use of Laboratory Animals of the National Institutes of Health. The animal use protocol has been reviewed and approved by the Institutional Animal Care and Use Committee (IACUC) of Sichuan University.

Rats were initially intraperitoneally injected with 0.3% pentobarbital 45 mg/kg, and a dose of 15 mg/kg was used to maintain anesthesia. The anaesthetized rats were fixed in a supine position, and mechanically ventilated via a rodent ventilator. II-lead electrocardiograms were recorded in the upper limbs and the left lower limb. The right arteria cruralis was separated, and two 4# stitches were made after the artery to ligate it distally, and a 24 G arterial puncture needle was inserted proximally in conjunction with heparin sodium salt. The right femoral vein was separated and a 22 G venous indwelling needle was inserted in conjunction with heparin sodium salt, and this was the route used to inject drugs and liquid. Heart rate, heart rhythm, systolic pressure, diastolic pressure, and Mean Arterial Pressure (MAP), were continuously monitored. The chest area was shaved, and defibrillating electrodes were inserted in the apex area and at the bottom of the heart to connect a Heart Stan XL manual defibrillator. Bipolar pacemaker electrode wires were inserted into the esophagus via the oral cavity, and the placement was deemed successful if neither flustering nor exasperation occurred.

Continuous thin current communication at a frequency of 50 Hz and 10 V was used to achieve electrophotoluminescence of the epicardium via the esophagus, which contributed to ventricular fibrillation. After electrophotoluminescence had been initiated, and breathing machine was stopped and ventilation was monitored. After 3 min, electrophotoluminescence was stopped, and sudden cardiac arrest was maintained for 6 min when the average arterial pressure was lower than 20 mmHg. CPR was then performed in accordance with the Utstein model [12]. Chest compressions were performed, and with reference to observed changes in electrocardiogram waveform, 5 J/kg direct current single-phase wave was used to achieve electric shock defibrillation once per min if ventricular rhythm was detected. If autonomous cardiac rhythm was not recovered within 3 min, 1:10,000 epinephrine solution (20 μg/kg) was injected intravenously once every 3 min until Restoration of Spontaneous Circulation (ROSC) occurred or the experiment was stopped.

ROSC was deemed to have occurred if autonomous cardiac rhythm was recovered with a MAP ≥ 50 mmHg and was maintained for >10 min. If CPR was applied for 20 min but ROSC was not achieved, or ROSC was not maintained for 10 min, the animal was deemed to be dead and was thereafter excluded from the study. The breathing machine was removed from rats with ROSC, and they were continuously monitored for 1 h. Rats were returned to their cages after they had recovered from anesthesia and exhibited powerful spontaneous breathing.

Heart rate and MAP were recorded in each group before ventricular fibrillation and after ROSC. Neurological Deficit Score (NDS) was used to assess neurologic impairment at 24 h after ROSC. The NDS reflects 7 components of neurological function; whole behavior, brainstem function, muscular tension, feeling, sports, behavior, and epileptic seizure. The maximum total score is 80, where 80 is defined as “normal”, and 0 indicates brain death (Table 1) [13]. 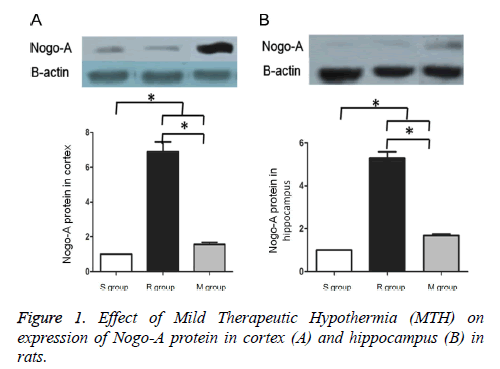 Figure 1: Effect of Mild Therapeutic Hypothermia (MTH) on expression of Nogo-A protein in cortex (A) and hippocampus (B) in rats. 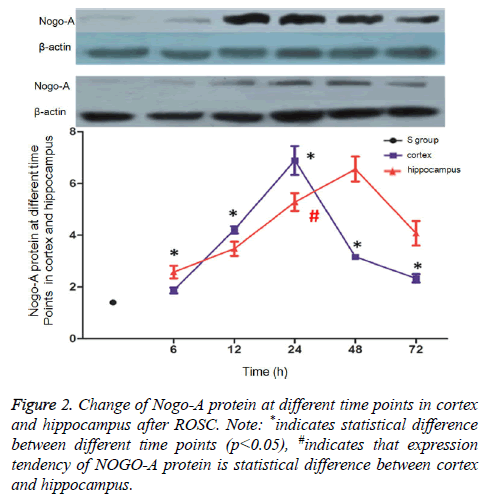 Many inhibitory factors are important causes of limited nerve fiber regeneration after CPR, which can lead to the CNS damage. Regeneration is mainly influenced by the functional regeneration of axons, and it is difficult to achieve effective rehabilitation if these inhibitory factors are not addressed [14,15]. Nogo-A protein is a transmembrane protein with an inhibitory effect on axon regeneration, and it is a strong inhibitor of nerve fiber regeneration. Previous Nogo-A studies have mainly focused on apoplexy, hypoxic-ischemic encephalopathy, and spinal cord injury. MTH can reportedly inhibit Nogo-A protein expression in the brain in many rat models, and it can accelerate neurons shaft breaking bud and increase dendrite branching, thus contributing to neural functional recovery [14].

Previous studies have shown that inhibition of Nogo-A can relieve cerebral injury, increase the regeneration of damaged nerve cells, and accelerate neural functional recovery. The molecular mechanisms of the cerebral protection achieved via the inhibition of Nogo-A mainly include increased axon regeneration and vicarious sprouting, increased myelin and myelin sheath capacity, increased synaptic plasticity with regard to building new loops, and facilitation of the migration of certain cells that play roles in injured parts of the brain including astrocytes, microglial cells, and macrophages/ inflammatory cells [11,16-18]. In the current study, Nogo-A expression levels in the cortex and hippocampus were significantly increased in the R group compared to before anabiosis. Nogo-A is increased in the brain after injury, and MTH can inhibit the over-expression of Nogo-A. These findings suggest that MTH inhibited increased Nogo-A expression in the R group, though Nogo-A expression was still higher than it was in the control group. Specifically, MTH indirectly inhibited Nogo-A expression by affecting other brain injury-related factors, although further investigation is required to clarify the mechanisms involved.

In the current study, Nogo-A expression exhibited time distribution specificity in the cerebral cortex and hippocampus after ROSC. Nogo-A initially increased, then reached a peak, then reduced. These variations are similar to what has been reported in other animal models [19], and Du et al. [8] reported that Nogo-A expression increased in lateral cortex and striatum ischemia after cerebral ischemic mode in an ischemic stroke model, then reached the peak, then gradually declined. With regard to the peak expression of Nogo-A, the main mechanism may relate to the stimulation of nerve cells under the stressed state. Particularly, oligodendroglia cells can generate and secrete more Nogo-A protein. Nogo-A will reduce when brain tissue undergoes ischemia, degeneration, and necrosis, and synthesis of many proteins and neurotransmitters will be reduced. Regulated changes in Nogo-A are consistent with the progression of patients after ROSC, and 50% of patients may die within 24 h after ROSC. When general condition and cardiac function stabilize, damage in brain tissue is gradually reduced, but severe damage can occur within 1-3 d [20]. Therefore, we speculate that Nogo-A expression levels are positively correlated with the severity of brain damage, because Nogo-A is widely distributed in oligodendrocytes and neurons, and it is an axon growth inhibiting factor associated with myelin. After Nogo-A binds to its receptor, NgR, it can activate the Rho GTPase signal transduction pathway, leading to growth cone collapse, and the inhibition of loop formation and dendritic branches and synapses. These events can further inhibit nerve regeneration after damage [21], and therefore the over-expression of Nogo-A can influence recovery from cerebral injury. Notably, a small quantity of Nogo-A is detected in normal brain, which may relate to the role of Nogo- A in contributing to axonal transport and synapse formation. The process can maintain stability of the cortex and hippocampus neuron circuits, and these regions have a certain amount of structural plasticity [22,23].

Taken together, the results of the current study suggest that Nogo-A protein contributes to early-stage brain injury after ROSC, and it is maintained for at least 72 h. In the clinic, early detection of serum Nogo-A can be used to estimate the degree of severity and prognosis of early ROSC (24 h, not continuous), which will contribute to strengthening interventions, accelerating recovery of neurological function, and improving survival. However, brain nerve dysfunction after cardiac arrest involves many mechanisms, and Nogo-A is only one of these. Additional studies should be performed to further clarify the complex mechanisms involved in brain nerve dysfunction.

This work was supported by grants from Science-technology Support Plan Projects of SCST (No. 2013SZ0079).