Ischemia is defined as the partial or complete deprivation of oxygen in the tissue induced by reduced or interrupted blood flow. Ovarian ischemia is usually associated with ovarian torsion. The cessation of O2 arrival to the tissues through the bloodstream attenuates the cellular synthesis of high-energy phosphate like ATP [1]. A decrease in ATP levels induces the inhibition of Na+ / K+, ATPase pump and increases the intracellular Ca2+ concentrations [2]. Increased Ca2+ levels convert xanthine dehydrogenase (XD) to xanthine oxidase (XO) in ischemic tissues, which is catalyzed by a protease enzyme [1]. As is known, the first intervention which will be held in the ischemic ovarian tissue is to provide re-vascularization (reperfusion) of tissue [3]. However, the provision of O2 with reperfusion ensures the conversion of hypoxanthine to xanthine by XO in ischemic tissue, which in turn leads to excessive formation of free oxygen radicals and reduction in antioxidants (GSH) defense mechanisms; The free oxygen radicals formed with reperfusion causes the oxidation of cell membrane lipids and the formation of toxic products from lipids such as malondialdehyde (MDA) [4]).

The literature data indicate that an increase in the intracellular Ca2+ ions in ischemic conditions leads to the formation of XO that forms the basis of reperfusion injury. This indicates that calcium channel blockade may be beneficial in the prevention of I/R injury. Lacidipine, which we will use in our study, is a dihydropyridine (DHP) derivative Ltype calcium channel blocker [5]. Lacidipine has been produced as an anti-hypertensive drug and then found out to have anti-aggregant, anti-atherogenic and strong antioxidant effects [6,7]. In literature reviews, there was no evidence of the protective effect of lacidipine on ovarian injury induced by I/R in rats. Therefore, purpose of this study is to investigate the effects of lacidipine on XO, MDA, MPO, and GSH levels in ovarian tissues of rats,which are subjected to ischemia and post-ischemic reperfusion.

Experimental animals were provided from Experimental Medical Application and Research Center at Ataturk University. In this study, a total of 42 female albino Wistar rats ranging from 220 g to 230 g in weight were used. The animals in groups were accommodated and fed in a normal room temperature (22°C). Animal experiments were performed in accordance with the national guidelines for the use and care of laboratory animals and approved by the local animal care committee of Ataturk University Erzurum, Turkey (No: B.30.2.ATA.0.01.02/-2654 Date: 29.06.2012).

Thiopental sodium and Lacidipine were provided by IE Ulagay, Turkey, Glaxo Smith Kline Istanbul, Turkey respectively that was used in the experiment.

Surgical procedures on rats were performed under 25 mg/kg intra-peritoneal (ip) thiopental sodium anesthesia under sterile conditions in appropriate laboratory conditions. After all groups of rats after were anesthetized, they were kept waiting for the appropriate time for surgical intervention. One hour before applying anesthesia in the groups LOI-2, LOI-4, LOIR-2 and LOIR-4, lacidipine was orally injected. Time period during which the animals remained in supine position is considered to be the appropriate time for surgical intervention. During this period, ovaries of rats were accessed by a 2-2.5 cm long lower abdominal vertical incision. Then, a vascular clip was placed at the inferior part of the right ovary of rats in OI, OIR, LOI-2, LOI-4, LOIR-2 and LOIR-4 groups and ischemia was induced for three hours. No ischemia induction was performed in the ovaries of healthy control group (HCG). At the end of this period, ovaries of OI, LOI-2 and LOI-4 groups were removed out and taken under examination. In OIR, LOIR-2 and LOIR-4 groups, reperfusion was achieved for two hours after removing the vascular clips. Then, the ovaries of the reperfused groups were excised and sought for XO, MDA, MPO, and GSH levels. The biochemical results from all groups were compared with each other.

Biochemical Analysis of Ovarian Tissue: Homogenates were prepared to measure the enzyme activity of ovarian tissues. In the supernatants obtained from the homogenates, XO, MDA, MPO, GSH and enzyme activities were detected by using appropriate methods based on the literature.

At this stage of the study, 0.2 g samples were taken from each of extracted ovaries. While the ovaries were underwent homogenization with 9mL 1.15% KCl buffer per each gram for MDA, the tissues extracted for XO and GSH analysis were washed with isotonic sodium chloride solution, and then completed to 2ml with phosphate buffer of pH = 7.5 and homogenized in ice cold. Then, they were centrifuged at 10000 rpm for 15 minutes at 4°C. The supernatant was used as an analyzing sample.

Xanthine oxidase (XO, EC 1.1.3.2) activity was measured according to Prajda and Weber's principle of the spectrophotometric assay of the increase in absorbance at 293 nm during the formation of xanthine-uric acid [8].

The method developed by Ohkawa H et al. is based on the spectrophotometric assay of the absorbance of pinkcolored complex generated by MDA and thiobarbituric acid (TBA) at high temperature (95 °C), at a wavelength of 532 nm [9].

MPO activity was measured according to the modified method of Bradley et al. The homogenized samples were frozen and centrifuged at 1500 g for 10 min at 4°C. MPO activity in the supernatant was determined by adding 100 mL of the supernatant to 1.9 mL of 10 mmol/L phosphate buffer (pH 6.0) and 1 mL of 1.5 mmol/L o-dianisidine hydrochloride containing 0.0005% (wt/vol) hydrogen peroxide. The changes in absorbance at 450 nm of each sample were recorded on a UV-vis spectrophotometer [10].

According to the method studied by Sedlak J et al., DTNB [5,5 '-Ditiyobis (2-nitrobenzoic acid)] in the measuring environment is a disulfide chromogen and readily reduced by sulfhydryl-group compounds. The yellow color formed during the reduction is measured spectrophotometrically at 412 nm (11).

All data were analysed by one-way analysis of variance (ANOVA) using SPSS 18.0 software. Differences among groups were obtained using the LSD option and significance was declared at p < 0.05. Results are the means ± standard error of the mean.

As seen from Figure 1 lasidipin 2 and 4 mg / kg doses were prevented significantly the increased XO levels after ischemia and ischemia-reperfusion in the ovaries. Also a dose dependendly Lacidipine was decreased MDA levels due to ovary ischemia and ischemia-reperfusion (Figure 2). As shown in Figure 3, MPO activity was nearly the same as the only OI group and HCG group, but it was significantly increased in the OIR group. 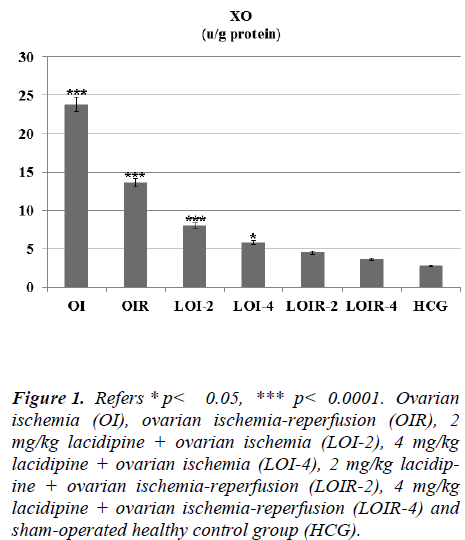 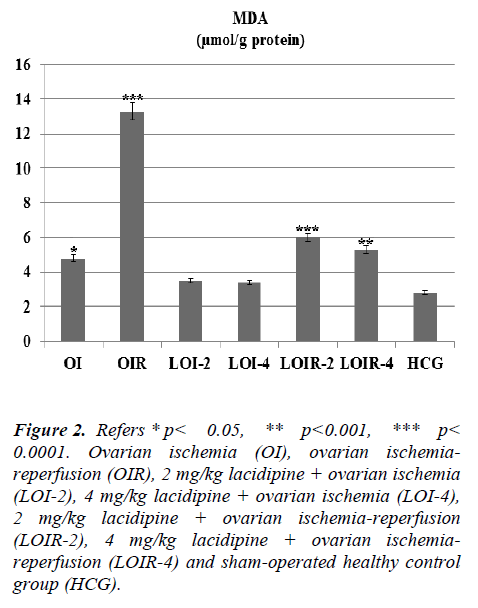 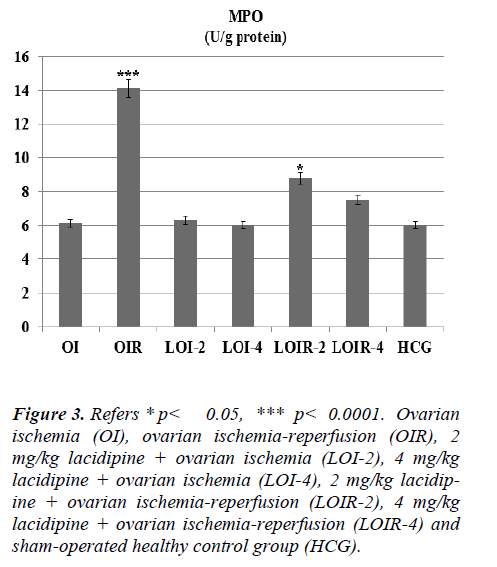 Lacidipine was prevented the MPO activity which was increased by reperfusion. Again Lacidipine 2 and 4 mg/kg doses were significantly increased the GSH levels in the ischaemia-reperfusion induced ovary tissue when we compared with the OIR group (Figure 4). 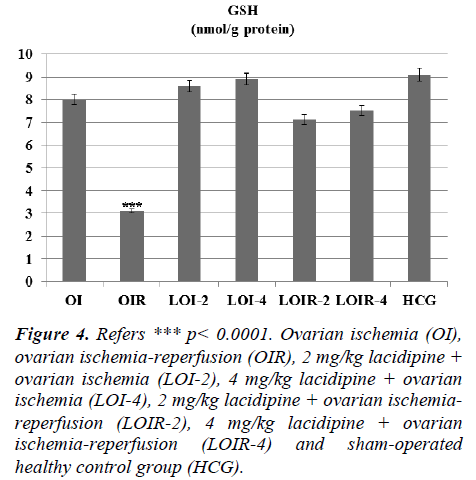 In this study, we investigated the effects of lacidipine on XO, MDA, MPO, and GSH levels in ovarian tissues of rats, which are subjected to ischemia and post-ischemic reperfusion. The results of the study demonstrated a statistically significant increase in XO enzyme activity in OI group when compared to the healthy control group. The XO enzyme activity is known to play an important role in the mechanism of ischemia-reperfusion injury [4]. XO enzyme was shown to be a source producing oxygen free radicals [1]. As mentioned above, an increase in XO levels in ischemic tissues arises from the intracellular influx and excessive deposition Ca+2 ions [12]. Significantly lower levels of XO activity in Lacidipine-treated ischemic ovarian tissues had been detected when we compared with the OI group. Lasidipinin was found powerful antioxidant agent, and this result was supported by literature [7].

There was no significant increase in the levels of lipid peroxidation product MDA and no significant decrease in GSH levels in lacidipine-treated LOI-2 and LOI-4 groups. However, MDA levels were much higher in the OIR group than the OI group, whereas GSH levels were found to be lower. This can be attributed to the production of insufficient amounts of oxygen radicals unless the reperfusion is ensured. Tok et al. also showed that small amounts of oxidant parameters are formed during ischemia and a much greater amount of oxidant parameters are produced after re-oxygenation of tissues in the reperfusion period [13]. Prior studies have also showed that MDA levels are further increased with reperfusion, whereas GSH levels are decreased in the ovarian tissues subjected only to ischemia [14]. The final component of the lipid peroxidation, MDA, is a three-carbon dialdehyde formed by the division of polyunsaturated fatty acids incurred to peroxidation. MDA is widely used as an indicator of oxidative status. In the biological environment, MDA exists as bound to the NH2 and / or SH groups macro-molecules or in free form. Increased production of MDA results in membrane changes and damage, such as ion transport, enzyme activity, and aggregation of the components of the cell surface [15]. Lacidipine significantly inhibited the decrease of GSH in the damaged ovarian tissues generated ovarian ischemia and postischemic reperfusion. GSH, as is known, is an important antioxidant compound that protects the tissues against oxidative damage. GSH maintains the reduced state of sulfhydryl (-SH) groups of proteins and protects proteins against oxidation. In addition, GSH provides the detoxification of foreign compounds and the transport of amino acids through the membranes, allowing the protection of the tissues from the oxidative stress [16]. Post-ischemic reperfusion has experimentally been demonstrated to cause severe damage to the ovary and other tissues [17, 18]. Lacidipine doses have significantly inhibited the increasing levels of XO, MDA and MPO in the ovarian tissues subjected to post-ischemic reperfusion. MPO activity was almost the same in OI, LOI-2, LOI-4 and control groups, while was much higher in OIR group which was subjected to reperfusion. MPO’s are known to be secreted from the activated polymorphonuclear leukocytes (PMNL). In ischemia-reperfusion injury, activation of PMNL, chemotaxis and leukocyte adhesion occur [19]. XO also has been found to participate in the production of chemotactic factors [20]. MPO, which is released by the activation of neutrophils, reduces hydrogen peroxide to hypochlorous acid in the presence of chloride ions. Hypochlorous acid is a strong oxidant and can easily react with many biological molecules, leading to tissue damage [21].

PMNL is known to have a role in the exacerbation of the inflammation. Studies conducted showed a correlation between the degree of PMNL activation and the severity of reperfusion injury [22]. Post-ischemic tissues produce inflammatory mediators which could activate PMNL [23]. Experimental studies have shown that calcium ions have an important role in the activation of PMNLs [24]. Ischemia-induced increase in intracellular calcium levels leads to the activation cyclooxygenase-2 (COX-2) enzyme and the release of proinflammatory prostaglandins and free oxygen radicals [25, 26]. In the literature, antiinflammatory activity has been indicated to arise from the suppression of COX-2 enzyme [27]. Lacidipine has been reported to significantly suppress the an experimental rat model of inflammation at 2 mg/kg and 4 mg/kg doses [28]. This literature data suggests that lacidipine inhibits the ovarian ischemic and post-ischemic reperfusion injuries via both its antioxidant and anti-inflammatory activities.

1-Oxidative damage in the ovarian tissue resulting from the post-ischemic reperfusion injury has been seen to be much more severe than resulting from ischemic damage only.

2-In ischemic ovarian tissue, biochemical parameters reflecting oxidative stress have increased even more with reperfusion, whereas antioxidant parameters have decreased.

3-The present study, conducted on the basis of the mechanism of formation of IR injury, demonstrated that lacidipine prevents ischemia-reperfusion injury in the ovarian tissues.

Finding the Lacidipine effective on ovarian ischemiareperfusion damage means this therapy can be useful in ovarian torsion damage treatment clinically.