Nanoparticles for their special and unique features are widely used in different industries such as medicine and pharmaceutical. In addition to positive aspects of gold nanoparticles, its toxicity in environment is unavoidable. This study was conducted on 40 Wistar rat, divided in 5 groups including a control, a sham and three other experimental groups. The control group was treated daily with 0.5 cc saline solution, the sham group had food and water, and three other groups received intraperitoneal injection of 0.5 cc gold nanoparticles at different doses (100, 50, 25 ppm). After 10 days of treatment, animals were anesthetized; blood samples were collected from the heart and luteinizing hormone (LH), follicle–stimulating hormone (FSH), and testosterone (T) were measured. Testes were removed and preserved in formaldehyde (10%) solution. For statistical analysis, the analysis of variance (ANOVA) and Dunnett test were performed by SPSS software, version19. Results showed that gold nanoparticles have significant effect on hormones in concentrations of 100 ppm. LH, FSH and testosterone were significantly increased compared to (P<0.05). Seminiferous tubular degeneration was also observed in the testes. These findings suggest that gold nanoparticles may cause an increase in hormones in female and in male with subsequent increase in sterility.

Nanomedicine has wide range of applications. One of the most important difficulties of nano medicine is to understand its effectiveness on environment and also to determine the possible toxicity of nanoscale materials [1]. Nano particles can be beneficial or be damaging at the same time. Materials could be toxic and hazardous when they are converted into nano form [2]. Additionally, the small size of nanoparticles allows them to overcome the defense barriers of the body without facing any obstacles [3]. Nanoparticles can be hazardous to health for two reasons; firstly, the nanoparticles can easily be absorbed through skin and epithelial cells and secondly, new and unknown nanoparticles exert toxic effects. Nano particles are so small that they can penetrate cell membrane. Larger particles could carry a foreign substance between “DNA” strands [4]. Nowadays, different kinds of coatings such as albumin, dextran, polyethylene glycol, polyethylene oxide, aspartic acid, etc., are being used to exploit the beneficial applications of nanoparticles in biological systems. Using of such coatings can be resulted in the stability of nanoparticles in biological solutions, in circulation, and their distribution in tissues. Then can also facilitate entering nanoparticles into cells and reduce their toxic effects [5,6]. Gold nanoparticles range from 3 to 100 nanometers. These nanoparticles can be used as potential detectors in designing of biosensors. The methods, which might be used are optical absorption spectroscopy, florescence, Raman scattering, magnetic force and electric current methods.

Trisodium citrate, a reducing agent was used as a nucleation factor (Turkevich method). Usually a mixture of HAuCl3 is heated to boil, stirred and then the aqueous solution of sodium citrate is added to it. The solution is kept at boiling temperature. Following the addition of sodium citrate the purple color appeared, which is becoming red. A step called delay or induction phase is occurred before the change of color, which resulted in the formation of precursors such as actone decarboxylic acid that is a product of the oxidation of citrate.

Suspension of purchased gold nanoparticles was administered to rats with different doses via oral gavage. Fourty adult Wistar rats weighing 250-200 grams at the age of 8 weeks were used to perform the test. The animals were purchased from Pasteur Institute of Iran, Tehran, IR Iran and divided into 5 groups including controls and three experimental groups. Eight rats were included in each group and all groups were kept in polypropylene cages with sawdust-covered floors and water bottles. Animals were kept under controlled conditions of temperature (22 ± 10 °C), humidity (60 ± 10%), and light (12 hours brightness, 12 hours darkness), with free access to water and food (Figure 1-2). All the rats were kept in the nest with similar conditions for 2 weeks prior to start of the experiments for adaptiation to their environment and diet. All procedures followed were in accordance with the ethical committee. Treated animals were marked by signs and were fed by oral gavage for10 days at the doses of 100, 50, 25 ppm and grouped accordingly. To test the hormones by tumor markers, blood sampling was done after 10 days of treatment. Blood samples were taken from the heart. The samples taken from the animals were placed in the special centrifuge tubes. Testes were removed and placed in a formaldehyde (10%) solution and sent to the laboratory for hematoxylin-eosin staining. 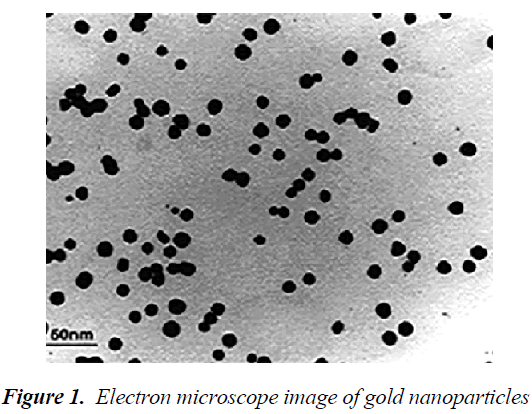 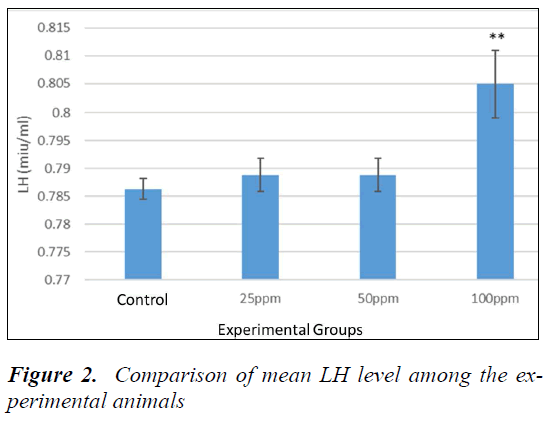 Figure 2: Comparison of mean LH level among the experimental animals

Data obtained from Electrochemiluminesence device was saved and analyzed using SPSS software, version19. Analysis of variance (ANOVA) test was performed by SPSS, and then the outputs were transferred to the Excel program. The results were presented as mean and standard deviation (SD). The data were normally distributed, therefore, repeated measures ANOVA was used to compare the enzymatic results among the groups before and after the experiment. ANOVA and Dunnett tests were applied to compare the groups together in each periods of time. The Level of significance was considered less than 0.05.

No significant difference was evident between sham and controls (P > 0.05). Therefore, to compare the FSH levels in the serum, all the animals were compared with controls. The mean level of FSH was increased in animals receiving nanoparticles in comparison with the controls. Table 4-3 ahow comparison among groups (Dunnett’s test). The level of FSH in the animals receiving 100 ppm was found to be significant compared to the controls (P = 0.036) (Fig. 3). 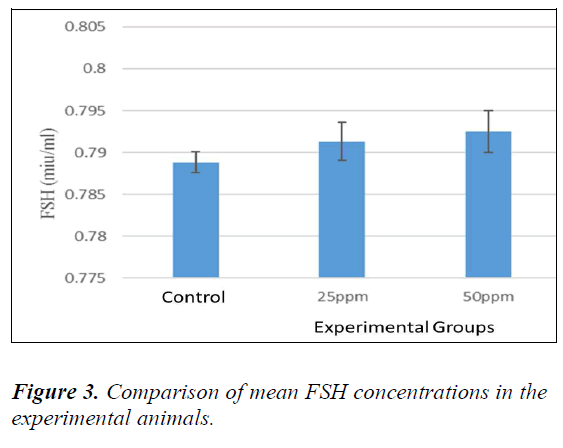 Figure 3: Comparison of mean FSH concentrations in the experimental animals.

In the control animals, no detectable changes were seen in the interstitial cells of Leydig, seminiferous tubules, and testicular cell lineages. In the animals, which received nanoparticles at a dose of 100 ppm, degeneration of seminiferous tubules was visible (Figure 3b).

No significant difference was evident in animals between the sham and controls (P > 0.05). T levels in the serum, animals of all the groups were compared with the controls. The mean level of T was found to be decreased with an increased dose of nanoparticles. The mean levels of T were decreased in the animals those received nanoparticles in comparison to the controls. According to Dunnett's test for comparison among groups, the level of T in the animals receiving 100 ppm was found to be significant compared to the control. (P = 0.001) (Fig. 4). 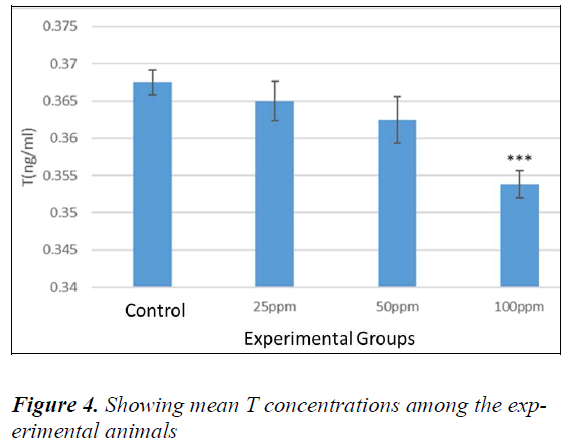 The science of nanotechnology is based on the fact that materials reduced to the nanoscale possess special and extraordinary properties [24]. When the bulk materials are converted into smaller structures or dimensions (such as length, width or thickness) in the range of nanometers or less, unique particles with unpredictable properties could be significantly different compared to the bulk material characteristics [13]. In a study conducted by Rezaei et al., (2012), the effects of silver nanoparticles on LH, FSH and testosterone in the male rats was investigated. The doses used were 200, 100, 50, 25 mg per kg body weight per day orally for 28 days. In our study, significant changes were not found in hormone concentrations up to 100 mg; however, a significant decrease in testosterone concentration was evident at higher doses (i.e. 200 mg) in comparison with controls, which could be caused by inhibitory effect of silver nanoparticles on the function of cells that produce testosterone. Results of out study also showed that silver nanoparticles decreased the levels of LH, FSH and testosterone in male rats [14], Silver nanoparticles also reduced Leydig cell mitochondrial secretory activity. Furthermore, silver nanoparticles caused an increase in oxygen free radicals, such as superoxidase and increased oxidation of molecules such as proteins [15].

Another study investigated the effect of silver nanoparticles consumption at concentrations of 95, 65, 35, 20, and 5 ppm instead of drinking water. After 3 and 6 months, 3 animals from each group were selected and the levels of sex hormones were evaluated. It was found that the level of testosterone increased with “testicle hyperactivity”. It was also found that nanoparticles could cause alterations in endocrine glands function [16] with decrease in the level of testosterone. Our study also determined the effects of iron oxide nanoparticles on the number and motility of sperm cells. Seventy-five (75) male mice were divided into 5 groups with 15 mice each in control and 4 expremental groups. Iron oxide nanoparticles dissolved in distilled water at doses of 40, 20, 10 and 5 mg / kg and injected intraperitoneally. At the end of the experimental period; spermatogenesis, sperm samples from the tail of the epididymedes were studies. Percentages of motile and immotile spermatozoa, as well as sperm cells count were made for each group of mice. Based on the results of this study it could be suggested that the iron oxide nanoparticles have a negative effect on sperm count and motility and this negative effect is directly linked with higher doses of iron oxide nanoparticles [17]. Carlson et al., (2008) found that the nanoparticles can affect the leydig cell mitochondrial activity and thus reduce its secretion activity. In addition, nanoparticles also caused an increase in oxygen free radicals, such as superoxidase and oxidation of molecules such as proteins [18], eventually reduce the leydig cell counts and decrease in the production of testosterone, which is consistent with our findings. Another assumption is that the nanoparticles could affect the gene expression of the protein that is involved in the transport of cholesterol into the inner membrane of mitochondria and increased the synthesis of steroids. It is also possible that nanoparticles by reducing the gene expression of the mitochondrial membrane protein Star, inhibit the cholesterol transportation into the inner membrane of mitochondria, and eventually inhibit the conversion of cholesterol to pregnenolone and reduced the level of testosterone. Karpenko (2013) studied toxic effects of cerium oxide nanoparticles on sex hormones and concluded that nanoparticle reduced glandular and testosterone secretion, which was increased after 70 days of treatment [19]. Our study also showed that gold nanoparticles reduced the level of testosterone.

According to the findings, it could be concluded that the negative effects of nanoparticles are greater than the positive effects, but in general, regardless of the dual effects, the mechanism of their action is to some extent similar. Nanoparticles also showed significant negative effects on the body. At the cellular level, the free radicals is increased and caused significant tissue damage. Our study showed that different doses of gold nanoparticles exert negative impact on testicular hormone secretion . By generating free radicals and reactive oxygen species, nanoparticles caused a considerable damage to the testis.