To investigated the effect of Baicalein on NF-κB/P65 expression in diabetic nephropathy (DN) patients and in vitro. 98 DN patients were randomly divided into two major groups, control group and treatment group. In treatment group, on the basis of basic treatment plus valsartan, and then administered orally baicalein aluminum capsule for 3 months. The serum levels of NF-κB/P65, TNF-α, urinary albumin excretion rate (UAER) and IL-8 were determined. Then the molecular mechanism of Baicalein on the expression of NF-κB/P65, TNF-α and IL-8 were studied. Human tubular epithelial HK2 cells were first exposed in high concentration of glucose for three weeks. Then the HK2 cells were treatment with various concentrations of Baicalein and NF-κB/P65 siRNA. Early apoptosis rate, gene expression and protein expression levels were determined via flow cytometry, RT-PCR and Western blotting, respectively. Gene interaction was detected by luciferase reporter gene assay. Our results indicated that Baicalein not only reduced the early apoptotic rate, but also inhibited the NF-κB/P65, TNF-α and IL-8 expression in the high glucose-damaged HK2 cells. Moreover, it up-regulated the miR-326 expression, which directly bind to the NF-κB/P65 3’UTR and played a negative regulatory role. This study provides a reference for the direction of the pharmacological mechanism of Baicalein in the treatment of DN patients.

It was reported that DN caused renal glomerulus and renal tubule interstitial fibrosis. The characteristic pathological changes include the glomerular sclerosis, thickening of renal tubular basement membrane and the accumulation of mesangial extracellular matrix (ECM) [1]. In the past decades, it has shown that activation of innate immune response and chronic inflammatory reactions were the factors of DN [2]. Nuclear Factor-Kappa B/P65 (NF-κB/P65) is normally inactive in the cytoplasm of most quiescent cells [3]. Diabetic hyperglycemia and advanced glycosylation end products (AGEs) trigger the inflammation response by activating NF-κB in the mesenteric cells. Then further induce the transcription of various factors, including cytokines such as tumor necrosis factor (TNF) and interleukins (i.e. IL-18, IL-2 and IL-6) [4]. It also plays an important role in the regulation of the expression of vascular endothelial growth factor (VEGF) and transforming growth factor beta-1 (TGF-1) [5].

Baicalein is the key active ingredient (5.41%) of the Chinese medicine Baical Skullcap Root, which has significant anti-inflammatory, anti-fibrosis and anti-oxidation effects [6].

Accumulating evidence showed that Baicalein inhibited the degradation of NF-κB inhibitor. Then it suppressed the formation of NF-κB-DNA complex and the expression of NF- κB dependent genes. Moreover, Baicalein improve hypopiesia and tachycardia caused by lipopolysaccharide, and has a strong anti- endotoxin effect [7]. In the present study, the serum levels of NF-κB/P65, TNF-α and IL-8 in the peripheral blood of patient with DN before and after Baicalein treatment were compared. The molecular mechanism involved was further investigated in vitro by treating the high glucose-damaged HK2 cells with Baicalein. It will provide new insights for the prevention and treatment of DN.

A total of 98 DN patients were recruited to our hospital during September 2012 to September 2014 in this study, with 48 males and 50 females, aging from 18 to 75 years. The average age of these patients was 60.5 years, with the history of diabetes ranging from 8 to 24 years. Then patients were randomly divided into two major groups: 56 in the treatment group and 42 in the control group. All procedures were in accordance with the Helsinki Declaration of 1964. Qingpu Branch of Zhongshan Hospital Affiliated to Fudan University reviewed and approved the study protocol. The informed consent was obtained from each patient. All patients were diagnosed with type 2 diabetes. Urinary albumin excretion rate (UAER) in the urine sample was measured by radioimmunoassay. According to the Mogensen DN staging scale, if two measures of UAER were between 20 μg/min-200 μg/min and there was no sever heart or liver disease involved, the patient was diagnosed as early DN.

Patients were obligated to control their protein intake for 4 weeks before the experimental treatment, so that their fasting blood glucose level was under 7.0 mmol/L and postprandial blood glucose levels were under 10 mmol/L. Valsartan (Novartis, Switzerland) was added to the basic treatment for both groups. In the treatment group, patients were orally administrated with Baicalein capsule (80 mg, Xiuzheng Pharmaceutical Group, PR China) 1.2 g each time and 3 times a day for 3 months. Then the serum levels of NF-κB/P65, TNF-α and IL-8, as well as the UAER in the urine sample from the two groups were compared.

The serum of the peripheral blood samples from two groups were collected, and the ELISA assays were performed according to the manufacturer’s instruction. OD values were measured at the wavelength of 450 nm, and the protein concentration of NF-κB/P65, TNF-α and IL-8 were calculated according to the standard curve.

Construction of a hsa-miR-326-expressing vector

The cells from each group were collected, washed 3 times in PBS, treated with 100 μL of protein lysate for 30 min at 4°C, and centrifuged at 12000 rpm for 15 min. The supernatant was collected and examined using a protein quantification kit (BCA protein quantification). Then the supernatant was subjected to 12% sodium dodecyl sulfate-polyacrylamide gel electrophoresis (SDS-PAGE) electrophoresis separation and the proteins were electrotransferred to nitrocellulose membranes. The membranes were treated with 50 g/L skim milk for 1 h and incubated with primary antibodies against NF- ΚBp65, TNF-α, and IL-8 (rabbit polyclonal antibodies; Cell Biotech, Tianjin, China) at 4°C overnight. The membranes were incubated with secondary antibodies conjugated to horseradish peroxidase (1:1000; Pharmingen, Becton Dickinson, San Diego, CA, USA) at room temperature for 1 h after washed 3 times with TBST.

All measurement data are expressed as mean ± SD. Data were first processed using the variance homogeneity test with the SPSS 20.0 software package. Statistical analysis was conducted using one-way analysis of variance (ANOVA). P<0.05 was considered to be statistically significant.

Baicalein suppressed the expression of NF-κB/P65, TNF-α and IL-8 in the peripheral blood and reduced the UAER of DN patient

To investigate effect of Baicalein on DN patients, we first detected the serum levels of NF-κB/P65, TNF-α and IL-8, as well as UAER prior to any treatment. Valsartan was then added to their basic treatment. For the treatment group, patients were also orally administrated with Baicalein capsule. The result indicated that the level of NF-κB/P65, TNF-α, IL-8 and UAER were significantly decreased in treatment group compared to control group after 3 months (P<0.05) (Table 1). 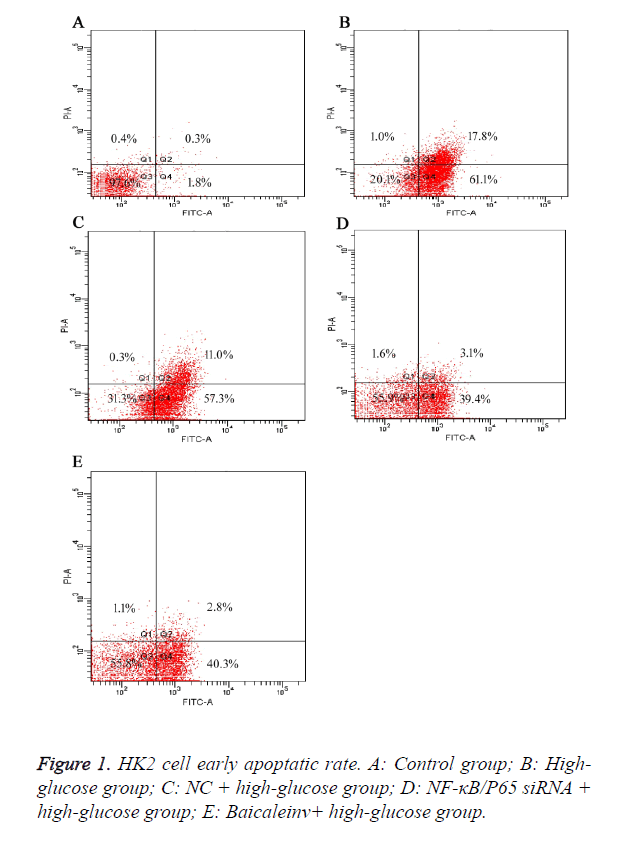 Baicalein inhibited the expression of NF-κB/P65 in HK2 cells 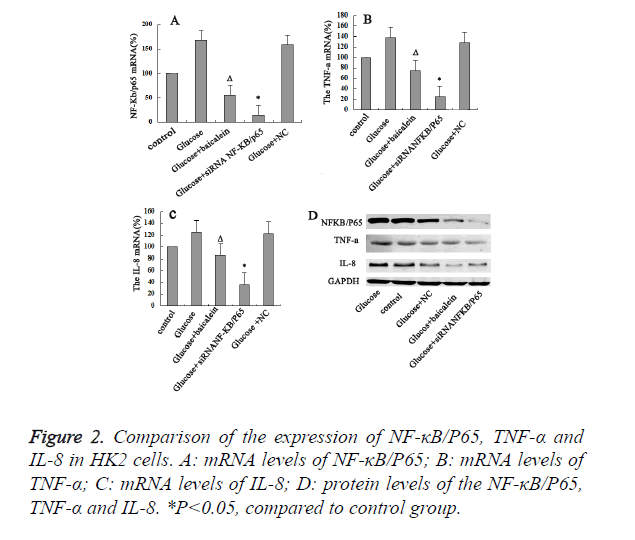 The results of RT-PCR revealed the high expression of miR-326 in the Bacailin and NF-κB/P65 siRNA group, and low expression of miR-326 in high-glucose and NC group (Figure 3A). It suggested that down-regulation of NF-κB/P65 trigger the up-regulation of miR-326 expression. To determine whether or not the observed effects depend on the regulation of the 3’ untranslated region (3’-UTR) of NF-κB/P65, a luciferase reporter plasmid containing the 3’-UTR of NF-κB/P65 was constructed (Figure 3D). Co-transfection of Hk2 cells with miR-326 mimics was performed to detect the binding site on the NF-κB/P65 3' UTR (1073-1079bp). The co-transfection of HK2 cells with miR-326 mimics and NF-KB/P65 3' UTR significantly inhibited the luciferase activity (P<0.05) (Figure 3B). However, co-transfection of HK2cells with miR-326 mimics and psiCHECK-2-mut- NF-κB/P65 3' UTR had little effect on the activity of luciferase (P>0.05) (Figure 3C). The above results demonstrated that miR-326 has a regulatory effect by binding to 3’ UTR of NF-κB/P65. Moreover, it was shown that the expression of miR-326 in the glucose-damaged HK2 cells was relatively low. The RT-PCR results indicated that the levels of NF-κB/P65 were significantly down-regulated in the high-glucose damaged HK2 cells on miR-326 over expression. Hence, Baicalein up-regulate the miR-326 expression, which could directly bind to the NF-κB/P65 3’UTR and played a negative regulatory role. 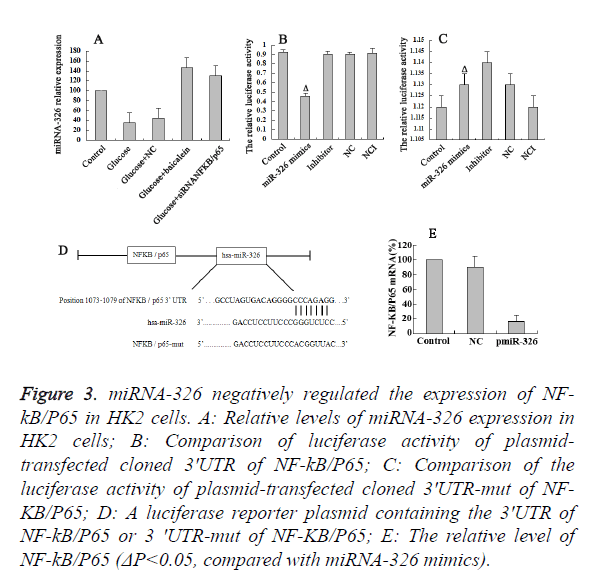 Figure 3. miRNA-326 negatively regulated the expression of NF-kB/ P65 in HK2 cells. A: Relative levels of miRNA-326 expression in HK2 cells; B: Comparison of luciferase activity of plasmidtransfected cloned 3'UTR of NF-kB/P65; C: Comparison of the luciferase activity of plasmid-transfected cloned 3'UTR-mut of NF-KB/ P65; D: A luciferase reporter plasmid containing the 3'UTR of NF-kB/P65 or 3 'UTR-mut of NF-KB/P65; E: The relative level of NF-kB/P65 (ΔP<0.05, compared with miRNA-326 mimics).

The incidence of Diabetic Nephropathy (DN) is approximately 20%-40% among diabetic patients, and it has become the main cause of End-Stage Renal Disease (ESRD) [10]. For most DN patients, the disease progressed rapidly even though their diet and blood pressure were strictly controlled [11]. Therefore, it is of great significance to explore its pathogenesis and develop new treatment strategy. Nuclear Factor-Kappa B/P65 (NF-κB/ P65) is the key regulator for the transcription and expression of inflammation-related genes [12]. Activation of NF-κB in the mesenteric cells induce the transcription of various factors, including cytokines such as TNF-α and interleukins (i.e. IL-18, IL-2 and IL-6), which are important factors in the inflammation response [3]. In the present study, upon treatment with Valsartan and Baicalein for 3 months, the levels of NF- κB/P65, TNF-α, IL-8, and the UAER of the DN patients were significantly decreased. Numerous studies have shown that Baicalein suppressed the degradation of NF-κB/P65 inhibitors. Then it inhibited the formation of NF-κB-DNA complex, the expression of NF-κB dependent genes, as well as the elevation of serum TNF-α level. Therefore, it has a strong anti-endotoxin effect [7]. In view of regulation of NF-κB/P65 in TNF-α and IL-8 expression, it might be the new therapeutic target in the future treatment with Baicalein for DN.

miRNA is a non-coding RNA with the length of 21-24 nucleotides, which widely exists in plants and animals. By binding to the nucleotides at the 3’ non-coding region of miRNA, the mRNA translation of the target genes is suppressed, thereby regulates the target gene expression at the transcription level [17]. miRNA targeting in the DN regulatory role may become a new DN markers and therapeutic targets in recent studies [18]. In the present study, miR-326 has a negative regulatory effect by binding to 3' UTR of NF-κB/P65. High miR-326 expression prolonged survival likely via the decreasing invasive potential of PDAC cell. At the same time, miR-326 played a key role in regulating TGF-1 expression and other profibrotic genes [19,20]. Therefore, miR-326 was essential in the progression of both lung fibrosis and DN. Moreover, we demonstrated that Baicalein up-regulated the miR-326 expression in high-glucose damaged HK2 cells.

In conclusion, our study demonstrated that Baicalein significantly reduced the levels of NF-κB/P65, TNF-α, IL-8 and UAER of DN patients. The possible molecular mechanism was that Baicalein not only could reduce the early apoptosis of HK2 cells, but also promote the expression of miR-326. Then suppressed the expression of NF-κB/P65 and decreased the levels of TNF-α, and IL-8 (Figure 4). 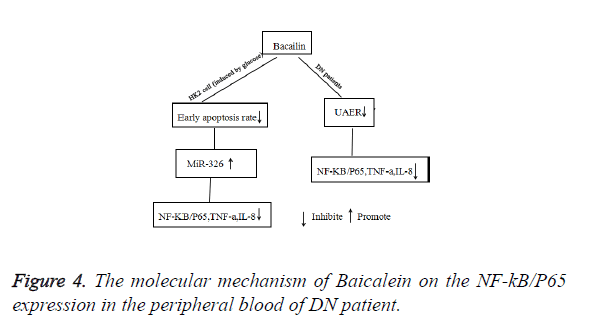 Figure 4. The molecular mechanism of Baicalein on the NF-kB/P65 expression in the peripheral blood of DN patient.

This work was supported by the Shanghai Health and Family Planning Commission research funding (NO: 201440304).