Missed abortion and hydatidiform mole (HM) are the common diseases in early pregnancy [1,2]. The standard time for early pregnancy is thirteen weeks before the embryo. The HM includes two types: complete hydatidiform mole (CHM) and partial hydatidiform mole (PHM) [3]. These moles are generally benign, which can be resolved through the way of the curettage or metastasis. HM associated missed abortion is a common special case of abortion, characterized by the death of embryonic tissue by overgrowth of placenta. Ultrasonic image examination can be used to carry out a comprehensive examination of the early embryos. Transvaginal ultrasound can directly scan organs. Monitoring of serum β-HCG is a key index in the confirmation of pregnancy [4]. This hormone is secreted by the placental cells during pregnancy. Based on the theories at home and abroad, the diagnosis of acephalocystis racemose and missed abortion based on transvaginal ultrasonography and serum β-HCG monitoring is analyzed and studied through the method of constructing the variance analysis model in this paper.

The issue of the diagnosis of acephalocystis racemose and missed abortion based on transvaginal ultrasonography and serum β-HCG monitoring is analyzed and studied by using the method of variance analysis also known as "ANOVA" or "F test". This is mainly used for the analysis and research on the controllable degree of the things with certain differences. In general, things with a certain degree of complexity include a number of factors that affect each other. Variance analysis can be used to make a significant difference analysis of these factors, and analyze the impact of the relationship among the factors. The basic principle of variance analysis is to decompose the variance of the factor and to find the sum of squares. There are certain assumptions in the variance analysis. Firstly, the samples are random; secondly, the relationship between samples is independent of each other; thirdly, there is a normal distribution relationship between samples; finally, the sample variance is consistent.

Analysis of the diagnosis of transvaginal ultrasound examination and missed abortion

Missed abortion is one of the most serious ultrasonic manifestations during the early pregnancy. According to the statistics, most of the pregnancy tests of missed abortion patients are negative, but there are a few positive patients. The positive patients should pay attention to other complications such as hydatidiform mole, and choriocarcinomas after curettage. The sonogram of ultrasonographic missed abortion shows the following disease identifications. The delay of ovulation and the identification of early pregnancy, the atypical hydatidiform mole, cystic degeneration of uterine fibroids are the major identification symptoms [5,6]. Application of transvaginal ultrasound technology is beneficial for missed abortion patients. The results obtained by this technique can be used as the basis for diagnosis of hydatidiform mole and abnormal pregnancy [7]. This technique helps the doctors to better understand the pathological changes. In addition, the application of ultrasonic imaging technology can avoid the blindness of miscarriage or abortion in great extent. For patients with severe adhesions of the uterine wall which can’t be cleaned once, the curettage operation can be carried out again under the guidance of transvaginal ultrasonography.

Human chorionic gonadotropin (HCG) is a glycoprotein hormone secreted by trophoblast cells. It is composed of two subunits [8]. A subunit is composed of 145 amino acids, with strong antigen specificity. It is able to differentiate with the yellow stimulating hormone, follicle stimulating hormone, thyroid stimulating hormone and so on which are similar to the a-HCG chain. Therefore, the concentration of β-HCG can reflect the concentration of HCG in blood, which is of great value in the diagnosis and monitoring of early pregnancy and ectopic pregnancy [9].

The results obtained by the method described above are shown in the Tables 1 and 2 and Figure 1. 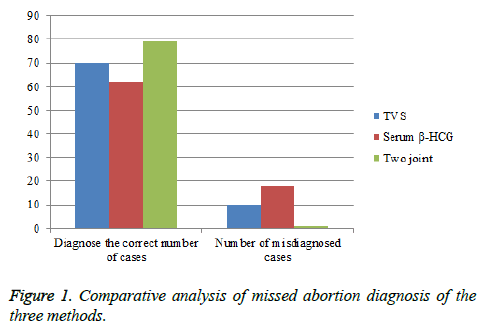 Table 2. Comparative analysis of the coincidencerate of diagnosis of missed abortion.

Irvine et al. [10] has discussed the need of alternative diagnostic tool for the ectopic pregnancies and the authors described a case of undetected ultrasound results during missed abortion. This case had a serial change in β-HCG whereas all other evidence presentations were nill. This study has also depicted a demand for the combinational detection model.