The oral health of the elderly is lost or weakened due to economic poverty and systemic diseases. The purpose of this study was to evaluate the satisfaction toward elderly scaling and to identify factors that affect scaling satisfaction in improving the oral health of the elderly. This survey was conducted between Feb. 11th to Dec. 23th 2016, and the subjects in this study were 202 elderly people who received scaling in the public health center. The respondents are generally female (70.8%), have an occupation (14.4%), and have health insurance (67.8%). In terms of health, the respondents have hypertension (33.25%), experience inconvenience in mobility (3.5%), have diabetes (18.8%), and are afflicted with other diseases (42.1%), and, in oral health, the number of remaining teeth at 22-28 was the largest among the elderly. Also, the elderly responded positively toward mobility (90.6%), necessity of scaling (61.9%), and use of dentures (43.6%). Tooth brushing was most frequent after breakfast, but the least frequent before bedtime. The elderly who received scaling was mostly satisfied with it (96.5%). The satisfaction toward elderly scaling was significantly associated with insurance application (p<0.05). Largely, the elderly is in favor of participation (99.5%) As a result, the elderly who received scaling in public health centers were satisfied with the program. Therefore, a public oral health project can be implemented continuously and developmentally to promote elderly oral health.

In the modern society, when there is an extension of the average life span and a decrease in the fertility rate, various social problems have emerged as the society gradually enters the superaged society beyond the aged society. In 2000, the number of elderly people in South Korea reached about 3.39 million, which was over 7% of the total population, thus entering the aged society. Currently, the number of elderly people has increased to 5.6 million, which is 11.8% of the total population. The Korean society is expected to become a fully aged society in 2020, and then become a superaged society in 2030, in which the elderly population would account for 20% of the total population [1]. Due to the change in the proportion of the population, there is an urgent need for diverse cultural and financial supports, as well as economic assistance and medical welfare, for the elderly who have become socially marginalized. Social efforts have been required in solving the various problems of the elderly, and, as part of such efforts, the necessity for an elderly dental health care project to promote and maintain the dental health of the elderly is emerging in the aspect of healthcare [2].

Periodontal disease has been reported as a major oral disease and has been responsible for tooth loss after middle age, with 10% to 15% of the adult population worldwide suffering from such disease [3]. The oral health of the elderly people is seriously threatened by dental caries and periodontal disease [4], and the loss of oral health also affects general health because elderly people have difficulties in food intake due to the loss of many teeth or oral diseases [5]. In general, elderly people without teeth often complain of gastrointestinal disturbances and indigestion [6]. Moreover, among the elderly population, masticating ability is lowered due to the loss of teeth, and discomforts occur, such as functional restriction or pain caused by dentures. As a result, the selection range of foods becomes narrow, and the quantity and quality of meals may decline, which makes the elderly feel lethargic in their daily lives, and makes it difficult for them to maintain health lives due to insufficient nutritional intake [7].

This study was conducted through an oral checkup and a survey that included items about the general characteristics of the subjects, the status of systemic and oral health, degree of satisfaction with the project, and intention to participate again.

General characteristics of the study subjects

As a result of examining oral health through an oral health checkup, the average number of remaining teeth among the elderly was between 22-28 teeth (32.7%), a fairly common trait. In terms of masticating ability, 186 (90.6%) answered that they are able to chew properly. On the need for scaling, 125 (61.9%) answered that it was necessary to remove dental calculus. On the question if they were wearing dentures, 88 (43.6%) answered yes, and 114 (56.4%) answered no (Table 3). 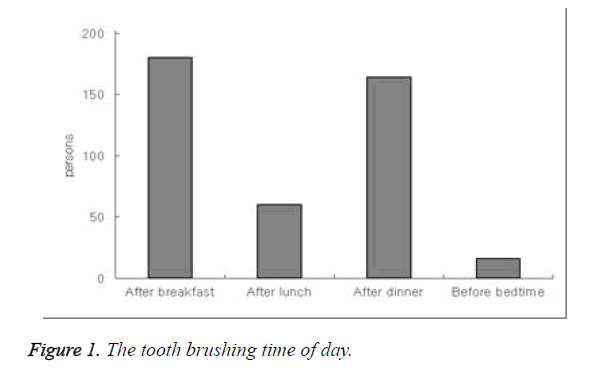 Satisfaction with the elderly scaling project

More than half of the elderly (56.9%) responded that they were very satisfied with the elderly fluoride application-scaling project, while 39.6% were satisfied, indicating that the level of satisfaction was 96.5% (Table 4).

Factors affecting the satisfaction toward the elderly scaling project

Table 5. Relation between General characteristics of study subjects and satisfaction of scaling project.

Table 6 shows the correlations between systemic health and satisfaction with the project. The correlations with the satisfaction were 0.034, 0.036, -0.007, and -0.079 in hypertension, discomfort in mobility, diabetes, and other diseases, respectively. None of them were statistically significant.

Table 6. Relation between systemic disease of study subjects and satisfaction of scaling project.

Table 7 shows correlations between oral health and satisfaction with the project. The correlations with the satisfaction were -0.057, 0.005, 0.075, and -0.125 in the number of remaining teeth, masticating ability, removal of dental calculus, and wearing of dentures, respectively. None of them were statistically significant.

For the item related to re-participation in the project, with the exception of one person, 201 (99.5%) respondents answered that they were willing to participate again in the project (Table 8).

The oral health of the elderly is lost or weakened due to economic poverty and systemic diseases. Urgent efforts are required at the national level to solve the problem, and the elderly oral health project is necessary to improve the quality of life of the elderly [10]. Therefore, this study analyzed the associations between personal characteristics and oral health by evaluating the satisfaction of the elderly, who are the beneficiaries of the elderly fluoride application-scaling project conducted by the Korean government. A total of 202 subjects participated in the study, and, among them, 70.8% were females, thus higher than the proportion of males, and only 14.4% of the elderly had an occupation. The proportion of the elderly who were covered by health insurance was high (67.8%), but 25.3% were beneficiaries of medical aid, and 6.9% were not covered by health insurance. This result implies that the elderly people are facing economic difficulties, causing a social problem in which some elderly could not receive health care benefits.

Health status was classified into the presence of typical systemic diseases and oral health. In terms of systemic diseases, 33.25% had hypertension; 3.5% had discomfort in mobility; 18.8% had diabetes; and 42.1% were afflicted with other diseases, indicating that most of the elderly have one or more systemic diseases affecting their health. Additionally, in terms of oral health, the most common number of remaining teeth was 22-28, which is slightly higher than the number of natural teeth in the elderly aged 65-74 (18.0 teeth) in the 2010 National Oral Health Survey [10]. On the other hand, 61.9% answered that removal of dental calculus was necessary, meaning that they had many remaining teeth. A large proportion of the elderly (90.6%) were able to chew, but it seems a result of a superficial question because the in-depth question on the degree of discomfort in chewing was not included. The proportion shows a difference from the result of Jang et al. [11] in which 65.5% answered that they experienced difficulty in food intake. As for dentures, 43.6% answered that they are currently wearing dentures, which is similar to the 59.6% in the study of Ahn et al. [12].

As for livelihood security, the National Pension Policy has established a foundation, but medical security is still very vulnerable in reality. Furthermore, Lim et al. Lim et al. [16] reported that general health had a significant difference depending on the type of medical security. Lee [17] showed that the medical aid beneficiaries had a worse oral health status compared to health insurance recipients, suggesting that the elderly people with health insurance benefits manage their oral health more effectively among the available types of medical security. Other studies have also found that more prostheses were needed for medical aid recipients than health insurance recipients [10], because the cost of maintaining oral health is too high for the elderly with less economic activity. Therefore, since economic status affects the health of the elderly, basic welfare for the elderly should be provided, and the need for extensive elderly welfare policies is emphasized not only for insured persons but also for medical aid beneficiaries and non-insured persons.

Moreover, considering the fact that most of the respondents (99.5%) showed re-participatory intention, it is necessary to expand and develop the project more systematically and widely while maintaining the goals of the current project. To maintain and develop the elderly fluoride application-scaling project of this study, it is necessary to expand the project to the socially vulnerable classes, and institutional supports must expand the coverage and scope of the National Health Insurance to benefit more elderly people. Additionally, further studies must be conducted to provide preventive and therapeutic methods for various diseases that may affect oral health through multifaceted analysis and to improve elderly oral health. However, since this study was conducted on elderly people living in Busan, it is difficult to generalize the result due to the possibility of regional difference. Also, when considering the fact that the respondents to the questions were elderly, there are limitations in that the standard is ambiguous, and the response may be subjective. Despite these limitations, this study is significant for focusing on the oral health of elderly people who are neglected and disadvantaged, and it will be important data for the development of a national policy in the future.

This study aimed to obtain basic data for promoting future elderly oral health by identifying the general characteristics and health status of elderly people aged 65 years or older, who participated in the elderly fluoride application-scaling project conducted by the Ministry of Health and Welfare, and by investigating their satisfaction with the project and re-participatory intention. In terms of the general characteristics of the subjects, there were more females (70.8%) than males. Only 14.4% of the elderly had an occupation, and 67.8% of the elderly were covered by health insurance. With regard to the health status of the study subjects, 33.25% of the elderly had hypertension; 3.5% experienced discomfort in mobility; 18.8% had diabetes; and 42.1% were afflicted with other diseases. In terms of oral health, the number of remaining teeth was 22-28, which was the most common among the elderly. Moreover, 90.6% were able to chew, which was a very high proportion, 61.9% responded that it is necessary to remove dental calculus, and 43.6% answered that they are wearing dentures. The respondents were most likely to brush their teeth after breakfast (89.4%) during the day, and least likely to brush their teeth before bedtime (7.9%). In terms of the subject’s satisfaction with the elderly fluoride application-scaling project, 56.9% were very satisfied and 39.6% were satisfied, showing that their degree of satisfaction is quite high. In terms of the associations between the general characteristics of the subjects and project satisfaction, health insurance showed a significant correlation with satisfaction (0.146, p<0.05). Likewise, 99.5% of the subjects intended to participate anew in the elderly fluoride application-scaling project.

This work was supported by a 2017 research grant from Youngsan University, Republic of Korea.