Purpose: The aim of this study was to explore the correlation between vitamin D receptor ApaI gene polymorphism and Gestational Diabetes Mellitus (GDM). Methods: 240 patients were divided them into GDM and non-GDM groups. DNA sampling was purified from peripheral blood and analysed by the PCR-RFLP for ApaI gene. BMI, Fasting Blood Glucose (FBG), and 1 h and 2 h Postprandial Glucose (PPG) were compared. Results: The genotype frequency of vitamin D receptor ApaI gene polymorphism significantly differed between two groups. Compared with AA genotype patients, the risk of gestational diabetes mellitus was significantly increased in those with CC genotype. Logistic regression analysis showed that there was no significant correlation between ApaI C allele and GDM. Conclusions: There was a significant correlation between vitamin D receptor ApaI gene polymorphism and GDM among pregnant women.

Gestational Diabetes Mellitus (GDM) is defined as the normal glucose metabolism or potential impaired glucose tolerance before pregnancy, first discovery and diagnosis of diabetes in pregnancy. Epidemiologic study showed that its morbidity rate among pregnant woman is approximately 1%-14%, which is related to giant baby, birth injury, toxemia of pregnancy and even stillborn foetus. Typical clinical manifestations include insulin resistance, hyperglycaemia and adiposity [1-3]. The specific cause of GDM is still unclear, but inherent cause and life style play an important role in the pathogenesis and progress. It has been proposed that variants of the nuclear Vitamin D Receptor (VDR) gene are associated with a susceptibility to Type 2 Diabetes Mellitus (T2DM) and GDM. Partial genes possess polymorphism which could influence on the transcription and activity of protein. VDR is involved in the metabolism of insulin as one of the members [4]. A latest study showed that vitamin D could assist in regulating the growth, survive, inflammation of cells and the secretion of insulin. In addition, the related study also showed that there was a correlation between vitamin D deficiency, insulin resistance and the increased risk of GDM [5]. VDR gene encoding nuclear transcription factor contained four types of second gene polymorphisms with obvious characteristics: BsmI (A>G, rs1544410); ApaI (A>C, rs7975232); FokI (C N T, rs10735810) and TaqI (T>C, rs731236). The study showed that gene polymorphism of VDR was associated with the susceptibility of type I and II diabetes mellitus [6,7]. It is worth to note common features of glucose intolerance, insulin resistance and insulin secretion dysfunction between GDM and type II diabetes mellitus [8]. VDR principally mediates the anticancer activities of vitamin D. Many studies investigated the association between VDR gene ApaI polymorphism and multiple malignant tumors, but the relationship between VDR gene polymorphism and GDM susceptibility has been rarely investigated. So this study was designed to explore the correlation between vitamin D receptor ApaI gene polymorphism and GDM, aiming to provide reference and guidance for clinical diagnosis and treatment of GDM.

In this case-control study, all 240 patients admitted to our hospital from January, 2014 to June, 2015 were recruited. All participants divided into the GDM group (n=120) and non- GDM group (n=120). Baseline data of the patients in two groups could be found in Table 1, the diagnostic criterion of GDM was Oral Glucose Tolerance Test (OGTT) during 24-28 weeks gestation according to the standard of International Association of Diabetes and Pregnancy Study Group (IADPSG) (0 minute 5.1 mmol/l, 60 minutes 10.0 mmol/l, 120 minutes 8.5 mmol/l). It would be diagnosed as GDM when more than one glucose level exceeded a threshold value. If all plasma glucose indexes were lower than threshold values, the subjects were diagnosed as Normal Glucose Tolerance (NGT) or non-GDM.

Patients with a medical history of diabetes mellitus, liver disease, kidney failure or functional disorder, thyroid diseases, toxemia of pregnancy, hyperandrogenism or those receiving anti-seizure and anti-depressive drugs, etc. All surgical procedures were in accordance with the ethics committee of our hospital.

The separation and gene detection of DNA

According to manufacturer's instructions, DNA purification kit (Sinaclon) of gene group was utilized for extracting DNA samples from venous blood, and then restored at-20°C. The polymorphism of vitamin D receptor was detected by using Polymerase Chain Reaction-Restriction Fragment Length Polymorphism (PCR-RFLP). With regards to the detection of VDR ApaI (A>C) polymorphism, primers were first used to amplify 745-bp fragment (forward primer: 5'- CAGAGCATGGACAGGGAGCAAG-3'; reverse primer: 5'- GCAACTCCTCATGGCTGAGGTCTCA-3'). The total PCR reactant was 25 μl, which contained 12.5 μl 2 × PCR mixture (Sinaclon), 1 ul primer (10 pmol/μl) and 1 ul DNA masterplate (100 ng/l); 30 circles (94°C for 45 seconds, 67°C for 45 seconds and then 72°C for 45 seconds), extended 10 minutes at 72°C. After PCR reaction, added 2.5 μ ApaI restricted enzyme (Fermentas) to an equivalent quantity of reaction product (10 μl) and kept reaction for 4 hours at 37°C. The genotype was defined as AA (745 bp), CC (528 and 217 bp) or CA (528, 217 and 745 bp). Processed cataphoresis for digestion products in 8% acrylamide gel on silver nitrate stained gel. The detection of serum glucose level was based on the method of glucose oxidase.

We used chi-square test to detect and analyse the differences in VDR genotype and abnormal frequency between the experimental and control groups. After adjusting age factor, logistic regression analysis was adopted to analyse Odds Ratios (ORs) of VDR genotype and 95% Confidential Interval (CIs). Biochemical data differences between two groups were analysed and compared by t-test or ANOVA. If p<0.05, then the differences had statistical significance.

As illustrated in Table 1, baseline data of the study subjects were included in the experimental and control groups. There was no significant difference in the average age between two groups (p=0.0001). Compared with the control group, Fasting Blood Glucose detection (FBG), 1 h and 2 h PPG in the experimental group were significantly increased (all p<0.05). There was a significant increase in the risk of GDM in patients with a family history of type II diabetes mellitus (χ2=18.55, OR: 3.44, 95% CI: 1.89-6.01; p=0.001). 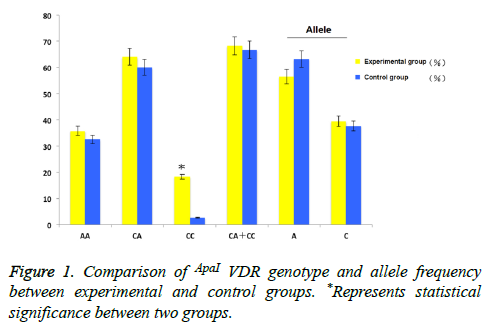 Logistic regression analysis showed no significant interaction between C ApaI allele and the risk of GDM. We further analysed the relationship between individual genotypes of VDR gene, population distribution and biochemical characteristics. The results showed there was no significant correlation (Table 2).

More and more attention should be paid to the research on common genetic variants of vitamin D receptor gene in diabetes mellitus, GDM and other diseases [4,9-11]. In this study, we mainly explored the correlation between ApaI VDR gene polymorphism and GDM and found there was a significant difference in genotype distribution between GDM and non-GDM counterparts. The comparison between CC and AA genotypes was more common. It was found that VDR ApaI allele polymorphism was associated with the incidence of GDM in this population. There was no significant difference in allele genes in the susceptibility of GDM between the experimental and control groups.

VDR is a nuclear factor which can mediate physiological metabolic activity of a majority of vitamin D. Vitamin D plays a role by regulating the level of extracellular calcium in beta cells, and promotes the secretion of insulin. Similar to type II diabetes mellitus, typical features of GDM include insulin resistance and related functional activity damage in target organ tissues. The latest study showed that there was a certain correlation between vitamin D and cancer, disseminated sclerosis, asthma and diabetes mellitus, etc. [15-18]. Multiple epidemiologic studies detected serum vitamin D level in GDM and non-GDM population, and found that there was a certain correlation between vitamin D deficiency and the incidence of GDM [19].