The aim of this study was to value of TWEAK protein in stroke diagnosis and the correlation between Tweak level and lesion size on diffusion MRI in patients admitted to emergency department for acute stroke. Our study was prospectively conducted in a group of patients diagnosed with stroke in the emergency department and a control group between 1 June 2014 and 31 August 2014. Age, sex, vital parameters, comorbid conditions, neurological deficit level, Tweak level, and involved volume on D-MRI were analyzed. Age, sex, vital parameters, comorbid conditions, and Tweak levels were compared between the patient and control groups. Tweak level was compared with neurological deficit and diffusion on D-MRI imaging in the patient group. The results were evaluated in a confidence interval of 95% and at a significance level of p<0.05. There were no significant differences between both groups with respect to age and sex distribution. The median Tweak level of the patient group was significantly higher (912.1 pg/ml vs 808.3 pg/ml, p<0.05). In the patient group NIHSS score had a positive correlation to MRI lesion size (p<0.05) but not to Tweak level (p>0.05). There was no correlation between Tweak level and the involved area on diffusion MRI (p>0.05).In conclusion, Tweak appears as a parameter that can be used in patients with a clinical presentation consistent with Stroke. It can be used for diagnostic purposes when cranial CT does not support the diagnosis or for supporting diagnosis when D-MRI is not available.

Stroke is the third leading cause of mortality and the top leading cause of morbidity worldwide [1]. While 85% of cases are of the ischemic type that develop secondary to thromboembolism, 15% of cases are of the hemorrhagic type, with the hypertensive form being the most common [1,2]. Early reperfusion of ischemic brain areas provide significant reductions in mortality and morbidity [3,4]. In emergency care setting, the diagnosis of stroke is made by patient history, physical examination, and imaging studies by Computerized Tomography (CT), and/or diffusion magnetic resonance imaging (D-MRI) [1]. Lack of widespread availability and requirement of experienced teams limit the use of these imaging modalities [5]. Recently, studies on ischemia (cardiac, intracerebral) have begun to investigate biomarkers that show variability especially in the physiopathology of ischemic events and at the post-ischemia period. Based on these studies, the idea has been born that cytokines playing a role in ischemic process may be used for diagnostic and therapeutic purposes [5-7]. Tumor necrosis factor-like weak inducer of apoptosis (Tweak) is thought to be one of those markers [8,9].

Tweak is a transmembrane protein (type 2) that is a member of tumor necrosis factor (TNF) super family [10]. Its presence has been demonstrated in heart [11], brain [12], kidney [13], and blood cells [14]. It functions in cellular growth stimulation, cell growth, and apoptosis [15,16]. Tweak/Fn14 has been reported to exist mainly in endothelial cells, perivascular astrocytes, microglia, and neurons of the central nervous system [15]. TWEAK stimulates various cellular responses including proliferation, survival, apoptosis, migration, and differentiation and plays major role in neuroinflammation, [17,18]. Inta et al. showed that expression of TWEAK increase in the acute ischemic stroke patients [19]. In our study it was aimed to value of TWEAK protein in stroke diagnosis and explores the correlation between Tweak level and size of lesion on diffusion MRI imaging in patients presenting to Emergency Department (ED) with a clinical consistent stroke symptoms.

This prospective case control study was approved by Ankara Numune Training and Research Hospital (3rd level stroke center) ethics committee (845/2014) and conducted prospectively between 1 June 2014 and 31 August 2014. Patients or patient relatives gave consent for the participation in the study. The inclusion criteria were as follows: having Stroke confirmed by D-MRI (Group P, n=44), healthy volunteer (Group C, n=44), being older than 18 years, giving informed consent for the participation in the study, and being admitted to emergency department within 24 hours from symptom onset.

The exclusion criteria were as follows: being younger than 18 years, not giving consent for the participation in the study, and presenting to emergency department more than 24 hours after symptom onset. Age, sex, pulse rate, mean arterial pressure, comorbid diseases, degree of neurological deficit, Tweak level, and involved volume on MRI were assessed in the patient group. In contrast, only Tweak level was measured in the control group. The Tweak samples were studied with eBioscience Instant ELISA kit. The level of neurological deficit was calculated according to the National Institutes of Health Stroke Scale Scores (NIHSS) [20].

Magnetic resonance imaging was used for MRG-D infarct detection and volume measurement in patients with suspected stroke. ABC/2 method was used for calculation of infarct volume [21]. According to this method, the longest diagonal lengths perpendicular to each other visualized at the section with the largest infarct size were accepted as A and B values; the product of the number of the sections in which the infarct is visualized and the section thickness was accepted as the C value. As most infarcts were ellipsoid, these three values were multiplied by 0.5.

Data analyzed with SPSS ® (Statistical Package for Social Sciences) Windows 17.0 software package. The descriptive statistics were presented as frequency (n), percentage (%), mean ± standard deviation, and median (interquartile range- IQR). The normality of the distribution of the continuous variables was tested using the Kolmogorov Smirnov test. The parametric variables were analyzed with Student’s t test; the non-parametric tests were analyzed with the Mann Whitney-U test and Kruskal Wallis test. The correlation between Tweak level and infarct diameter was assessed with the Pearson’s correlation test. ROC analysis performed for sensitivity and specificity of Tweak. The results were presented in a confidence interval of 95% and a significance level of p<0.05.

The median age of the Stroke group was 71 years (IQR 27 years), and the control group had a median age of 65.5 years (IQR 25.3 years). Males constituted 59.1% of the patient group and 50% of the control group. While systolic arterial pressure (SAP), pulse rate, and the rate of atrial fibrillation were significantly higher in the patient group (p<0.05), no significant differences were observed between two groups with regard to diastolic arterial pressure (DAP) and the rates of comorbid disease and non-AF comorbid conditions (p>0.05). The most common comorbid condition was hypertension in both groups. The mean Tweak levels of the patient and control groups were 912.1 pg/mL (IQR: 425.8) and 808.3 pg/mL (IQR: 458.6), respectively. Tweak level was significantly higher in the patient group (p<0.05) (Table 1). It was observed that MRI lesion size significantly increased as NIHSS score increased (p<0.05). There was no significant correlation between NIHSS score and Tweak level (p>0.05) (Table 2). A correlation was not detected between the Tweak level of the Stroke group and size of the infarct area on diffusion MRI (r=-0.196, p>0.05). A ROC analysis was performed to determine the sensitivity and specificity of Tweak for the prediction of Stroke. A Tweak level of 675.43 mg/dl had a sensitivity of 86%, a specificity of 43%, a positive predictive value (PPV) of 60%, and a negative predictive value (NPV) of 76% (AUC= 0.64, CI= 0.53 – 0.74, Youden index J=0.29) (Figure 1).

Table 1. Distribution of the characteristics according to groups.

Table 2. The correlation of clinical status with involved area on MRI and tweak level. 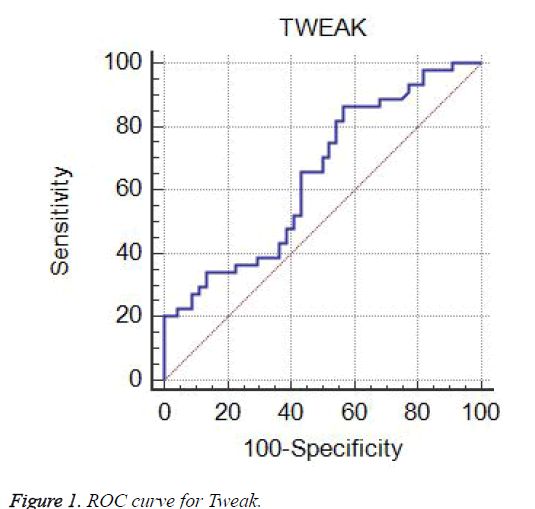 A study conducted on patients with Stroke reported that arrhythmias (particularly tachycardia) and ST segment changes frequently occurred within a time window of 24 hours [22]. Elevated blood pressure and pulse rate in the patient group of our study shows similarity with the literature reports. We think that, in addition to Dopamine released from corpus striatum, increased stress hormone levels also lead to increased blood pressure and pulse rate. Some disease such as hypertension DM and AF are known to be involved in the etiology of Stroke [23,24]. Our study results showed that the rate of HT and DM were similar in the patient and control groups. We believe that an increased AF prevalence especially in our patient group may explain the fact that embolic events of cardiac origin are one of the most important factors causing Strokes.

Recent reports have indicated a role of Tweak/Fn14 axis after ischemic stroke [8,25-27]. In patients suffering cerebrovascular accident, an increase in Fn14 activity especially in the penumbra region and an increased amount of Tweak protein binding to this area have been shown following ischemia [8,27,28]. Previous studies have indicated Tweak inhibition in human nerve cells [12,27], which has been reported to occur mostly in astrocytes followed by neurons [8]. In vivo [29-33] and in vitro [34] studies with Tweak have demonstrated that it activates NF-kappa B pathway, which in turn augments ischemia. Tweak was shown to induce cell death in PARP-1 and caspase-3 neurons as a result of NF-kappa B activation [26,27]. It has been demonstrated that during this ischemic process none of Fn14 or Tweak induces apoptosis per se, but the interaction of both does this job [26]. Furthermore, it has been reported that Tweak is not a protein that increases solely following ischemia, but it also takes part in many pathological processes from atherosclerosis to plaque rupture [25]. We found that Tweak protein was significantly elevated in patients with clinical signs of Stroke compared to the control group. To our opinion, Tweak protein increases in Stroke as a result of increased Fn14 levels especially in the penumbra region following ischemia, and also due to cytokines released in the process tissue reparation.

D-MRI, use of which has recently increased, is an imaging modality preferred when Stroke cannot be clearly ruled in by other methods. Studies on cases with acute stroke have demonstrated a deterioration in clinical status in parallel with an increase in the size of the involved area on D-MRI [21,33]. Similar to the literature data, our results showed deterioration in patients’ clinical status as the size of the area with diffusion limitation increased. Our opinion that the basic mechanism underlying this finding is the increase in the involvement of organ systems as penumbra region enlarged. Hakbilir et al. reported that ischemia has been associated with neuronal death and worse prognosis, and an increase in the expression of proinflammatory molecules [35]. Neuroradiological studies have indicated that a reduction in cerebral blood flow of more than 80% results in ischemic brain, leading to elevated Tweak and Fn14 levels [25,34]. These alterations are predominantly in the ischemic hemisphere, especially in the penumbra region [36]. It is known that the level of Tweak protein sharply increases after ischemia and returns to normal within 24 hours [8,36]. Our study did not reveal a significant correlation between Tweak level and clinical status and the limitation on D-MRI. This may be due to our failure to assess D-MRI area and Tweak level simultaneously although we aimed to do so while designing the study. Obtaining a D-MRI beyond 24 hours in rare patients with suspected Stroke due to both patient- and hospital-related factors may have led to rapid normalization of Tweak levels during that period, making it impossible to detect a correlation between the protein and D-MRI limitation, clinical status.

Tweak appears to be a parameter that can be used in patients with a clinical presentation consistent with Stroke. More studies are needed to investigate its use in ED.

The major limitation is study it’s the sample size is too small. Given the significant different levels of Tweak level by student t-test, the stand deviation level still too high suggesting some cases with marked variation in measuring levels.