Diabetes mellitus is a group of metabolic diseases characterized by hyperglycemia resulting from defects in insulin secretion, insulin action, or both. The chronic hyperglycemia of diabetes is associated with long-term damage, dysfunction, and failure of various organs, especially the eyes, kidneys, nerves, heart, and blood vessels. 50% of people with diabetes die of cardiovascular disease (primarily heart disease and stroke) [1]. About 382 million people suffered from diabetes in 2013 and this number is expected to rise to 592 million by 2035, while 175 million people remain undiagnosed. Ninety per cent of these people suffer from type 2 Diabetes Mellitus (DM) [2]. Many longitudinal studies in adults have demonstrated that insulin resistance (IR) is a risk factor of the development of type 2 diabetes [3]. The interest for IR and metabolic syndrome lies in their high prevalence in the population and the associated high death rate, fundamentally through coronary heart disease, even in nondiabetic subjects [4,5]. Glycated haemoglobin (HbA1c) is a routinely used marker for long-term glycaemic control. In accordance with its function as an indicator for the mean blood glucose level, HbA1c predicts the risk for the development of diabetic complications in diabetic patients1 and may be suggested as diagnostic criteria that detects more diabetes and pre-diabetes cases than fasting glucose or oral glucose tolerance test OGTT [6]. An early intervention to normalize circulating lipids has been shown to reduce cardiovascular complications and mortality [7]. The glycated haemoglobin (HbA1c) provides an index of type 2 diabetics’ average blood glucose level during the past 2–3 months and considered to be the most objective and reliable measure of long-term metabolic control of glucose [8]. This study aimed to reveal the correlation of HbA1c with BMI and HDL-cholesterol in Type 2 diabetic Saudi patients.

This is an observational hospital based- case control study that was conducted in Najran University Hospital (Najran, Saudi Arabia). Two hundred-twenty diabetic patients (120 males and 100 females) and 76 healthy non-diabetic control subjects (42 males and 34 females) participated in this study and their ages ranged between 35 and 86 years. Patients were clinically diagnosed as diabetic according to WHO criteria [9]. All patients were newly discovered as type 2 diabetes. Patients who received previous hypoglycemic medications and those with abnormal liver function, nephropathy, neuropathy or retinopathy were excluded from the study. Weight was measured using electronic digital scales. Height was measured using a wall-mounted stadiometer. BMI was subsequently calculated as weight (kg) per height (m2).

Cases for the study were selected in accordance with the above mentioned inclusion and exclusion criteria. Data were collected using a pre-tested pro forma meeting the objectives of the study. Five ml of venous blood were collected (in fasting state), venous blood was drawn into plain vacutainers, and then centrifuged and serum was separated. The sera were used to measure the concentration of HbA1c and lipid profile using spectrophotometric methods. Fasting plasma glucose and 2h- BG (after 75 g glucose load) were estimated for all studied subjects. Results of this study were statistically analysed using statistical package for social science (SPSS) program. Significant differences between groups were assessed by oneway ANOVA and t-test. Pearson correlation was done and the r values were calculated at level of (p<0.05) significance.

Table 1: Descriptive results of the study. 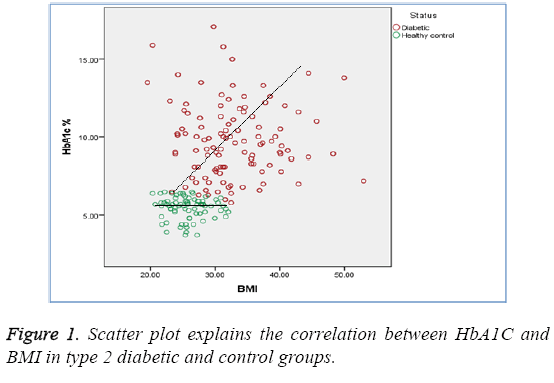 Figure 1: Scatter plot explains the correlation between HbA1C and BMI in type 2 diabetic and control groups. 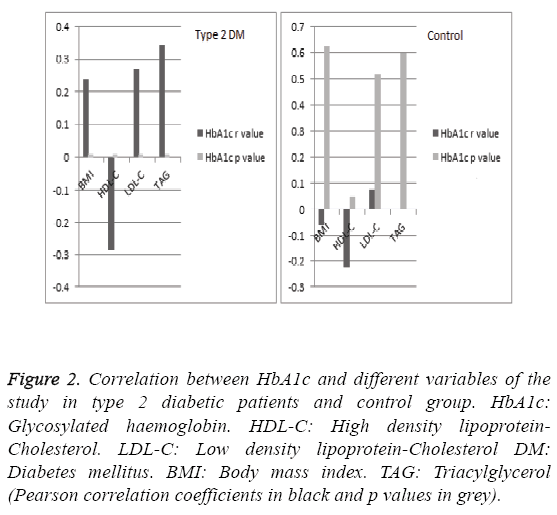 From our study, it is clear that there is a statistically significant positive correlation between HbA1c and BMI (r=0.240, p<0.0001) and there is a statistically significant negative correlation between HbA1c and HDL-cholesterol (r=-0.286, p<0.0001) in diabetic patients. Moreover, there was a statistically significant positive correlation between HbA1c and LDL-cholesterol (r=0.271, p<0.0001). Thus, HbA1c can be used as a helpful potential biomarker that tolerates the ability of predicting serum lipid profile in diabetic patients and hence defining who are at a greater risk of cardiovascular complications. These findings are in concordance with many previous studies. Alam et al. reported that HbA1c can be used as a potential dual marker of glycaemic control and dyslipidaemia in type 2 diabetes mellitus [10]. In another study carried out on the Western Indian population, Sheth et al. showed that the dyslipidaemic obese subjects had significant linear association with HbA1c in T2DM subjects [11]. Consequently, early diagnosis of dyslipidaemia can be used as a preventive measure for the development of cardiovascular disease (CVD) in type 2 diabetics. Bodhe et al. concluded that HbA1c can provide valuable supplementary information about the extent of circulating lipids besides its primary role in monitoring long-term glycaemic control [12].

Obesity plays a central role in the pathophysiology of both type 2 diabetes and its macro vascular complications. Moreover, Epidemiologic research of cardiovascular risk factors among patients with T2D and different BMI ranges may provide clues as to the relative contribution of obesity to the cardiovascular risk of patients who already have a higher risk of cardiovascular complications because of type 2 diabetes [13]. Statistically significant positive correlation between BMI and LDL-cholesterol (r=0.271, p<0.0001); and between BMI and TG (r=0.196, p<0.01) makes BMI to be an impressive predictor of dyslipidaemia in type 2 diabetic patients. These results are concordant with some previous study which revealed that having obesity, BMI>25, was 3.6 times more associated with having non-high-density lipoprotein>130 mg/dl [14]. Hassan et al. (2015) [15] reported a positive correlation between LDL-cholesterol and BMI and waist circumference (WC) in Egyptian diabetic patients.

Naveen et al. (2014) found a strong positive correlation between insulin resistance (The homeostasis model assessment of insulin resistance or HOMA-IR score) and HbA1c (r=0.338, p=0.0001); and PPBG (r=0.348, p=0.0001). Moreover, a significant association was observed between HOMA IR score, HbA1c and BMI (p value of 0.024** and 0.000** respectively) [5]. Raja Reddy et al. (2013) [16] suggested that HbA1c endures the ability of predicting serum lipid profile in both male and female diabetic patients. Thus, monitoring of glycaemic control using HbA1c along with lipid profile could have additional benefits of identifying diabetic patients who are at a greater risk of cardiovascular complications and their study suggested that relative risk of cardiovascular disease is higher in diabetic women compared to diabetic men, but the mechanism behind the increased risk need to be studied further.

Significant low plasma HDL-cholesterol and high non-HDLcholesterol in diabetic patients compared with non-diabetic control group was found in our study. The low plasma HDLcholesterol levels have been attributed to increased fractional clearance of HDL secondary to depletion of its cholesterol. Many key enzymes involved in HDL metabolism are altered in obese people with insulin resistance. Some of these changes are further developed in type 2 diabetes where in addition to insulin resistance, relative or absolute insulin deficiency [17,18]. Thus, our study supported the idea of previous studies proposed the concept of ‘the lower the better’ which was confirmed for non-HDL: HDL but not for LDL that non-HDLcholesterol may serve as an adequate screening tool for dyslipidaemia in adolescents with diabetes [19,20].

This work was supported by a grant from the Deanship of Scientific Research, Najran University, and KSA (NU/MID/14/042).