Introduction: Helicobacter pylori are a microaerophile gram-negative bacteria and the most frequent factor of chronic gastritis. Recently, there has been an inclination to various non-invasive tests to determine the severity of H. pylori infection in the gastric tissue. The serum neutrophils/lymphocytes rate (NLR) is a simple, safe, non-invasive and active inflammation reagent. The purpose of this study is examining the correlation between the increase in the positivity/severity of H. pylori infection and the increase in the NLR.

Material and Method: 149 patients were included into the study by considering the Sydney criteria in accordance with H. pylori severity degrees in 3 groups; Mild (n=49), Moderate-Severe (n=67) and Severe (n=33). A Control Group was also formed (n=22) with negative H. pylori by three experienced pathologists.

Conclusion: It is suggested that the serum NLR, which can be used in order to predict the severity of the H. pylori Infection in patients with chronic gastritis, can be a practical, inexpensive and non-invasive test.

Currently H. pylori infection is prevalent in 50% of the world’s population [1]. Chronic gastritis associated with H. pylori infection is characterized histologically by the presence of lymphoid follicle hyperplasia, intestinal metaplasia and neutrophil infiltration to the lamina propria in varying degrees [2]. According to the Sydney Gastritis Classification System, the increase in neutrophil predominant inflammatory cells represents acute gastritis, while the increase in chronic inflammatory cells (lymphocytes and plasmacytes) represents chronic gastritis [3]. Due to the fact that Sydney Gastritis Classification System requires an invasive procedure, there is an inclination to various non-invasive tests in order to predict the severity of H. pylori infection. Serum neutrophil/ lymphocyte ratio (NLR) is a simple, safe, relatively noninvasive acute inflammation marker [4]. The aim of our study is to determine the correlation between the severity of H. pylori infection and active and chronic gastritis, and the increase in serum NLR in patients with chronic H. pylori gastritis.

We retrospectively reevaluated the histories, the complete blood count (CBC) test results and the pathology reports of 450 patients who had undergone gastroscopic examination due to dyspeptic complaints in our gastroenterology unit between 2014 and 2015. The endoscopic biopsies were taken from the gastric antrum by an experienced gastroenterologist and were interpreted by an experienced pathologist. Severity of active and chronic gastritis and H. pylori infection were scored using a 3 scale scoring system as “mild, moderate and severe” according to the Sydney Gastritis Classification System. Glandular atrophy and intestinal metaplasia were also noted in the pathology reports. 149 patients with active, chronic H. pylori gastritis without any other concomitant inflammatory disorders were included in our study. A control group consisting of 22 subjects with dyspeptic complaints who had undergone gastroscopic biopsy was also included. The subjects in the control group had no histopathologically determined H. pylori infection or gastritis nor did they have any other known inflammatory disorders. The serum NLRs of the 171 patients enrolled in our study were calculated according to the results of the CBC tests performed prior to the gastroscopic biopsy procedures. Using the SPSS 17 program, the Pearson Correlation Rates were performed and the statistical analysis of the patient and control groups was compared.

Table 1. The correlation between the severity of H. pylori infection and serum NLRs of the active, chronic gastritis patients and the control group.

Table 2. The correlation between gastritis activity, chronicity scores, the severity of H. pylori infection and the increase in serum NLRs of the patients.

H. pylori is a microaerophilic gram-negative bacteria and the most common human pathogen in our century. It has been determined to be colonized in almost half of the world’s population [1]. H. pylori is the most common etiologic factor of chronic gastritis [5]. The bacteria have a predilection for the gastric antral mucosa because it can reproduce more easily in the mucus secreting areas of the stomach. H. pylori has virulence factors which play a role in the pathogenesis of the infection, such as kinase inhibitors, which also take part in the loss of polarity and elongation in the gastric epithelial cells. Additionally, proinflammatory cytokines are released, resulting the activation of neutrophils which play a major role in the active inflammation [6,7]. While neutrophils play a role in the active inflammation in acute gastritis; lymphocytes and plasma cells accompany the inflammatory process in chronic gastritis [8]. According to the Sydney Gastritis Classification and Rating System, the severity of the inflammatory activity in acute gastritis is assessed by the infiltration of neutrophils into the gastric crypts, and the severity of chronic inflammation is determined by the infiltration of lymphocytes into the lamina propria. 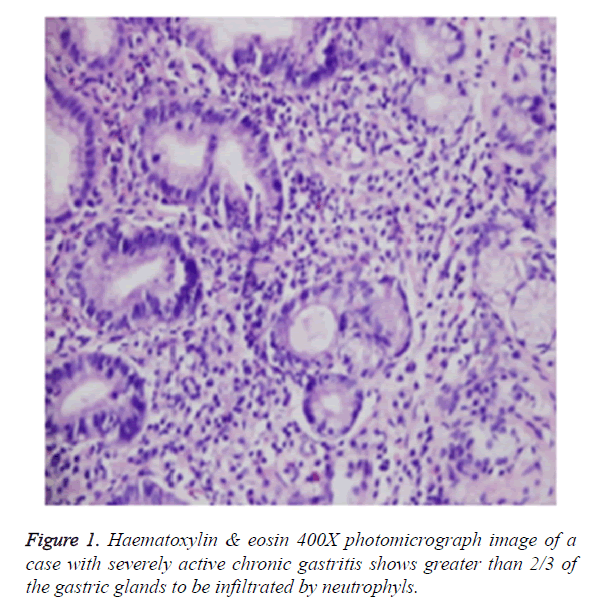 Figure 1. Haematoxylin & eosin 400X photomicrograph image of a case with severely active chronic gastritis shows greater than 2/3 of the gastric glands to be infiltrated by neutrophyls. 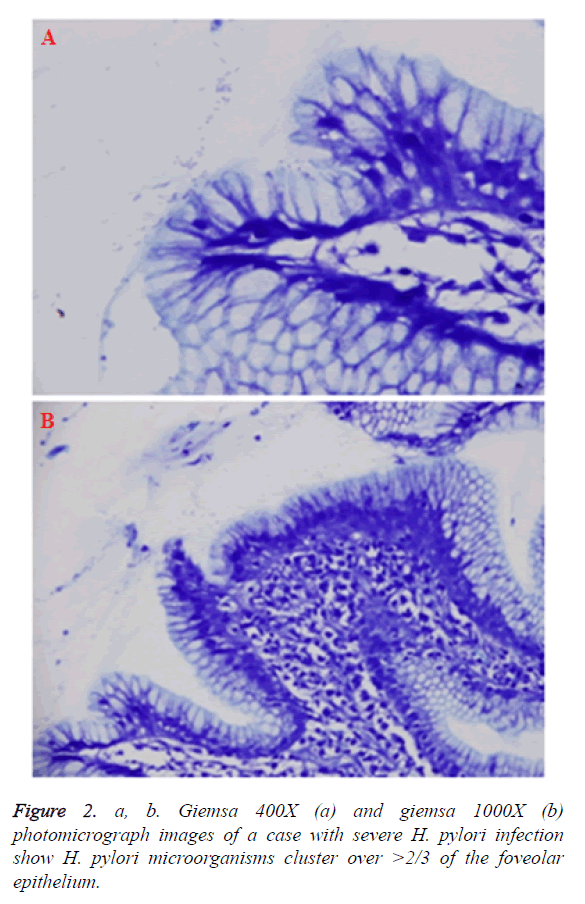 Figure 2. a, b. Giemsa 400X (a) and giemsa 1000X (b) photomicrograph images of a case with severe H. pylori infection show H. pylori microorganisms cluster over >2/3 of the foveolar epithelium.

Due to the fact that Sydney Gastritis Classification System is associated with an invasive procedure, in recents studies, relatively non-invasive tests have started to be used to determine the severity of H. pylori infection in gastritis patients. In previous years, Karttunen et al. [14], stated that mucosal inflammation due to H. pylori infection is reflected in the amount of peripheral blood leucocytes. In 2004, serum NLR is determined to be an economic, relatively non-invasive acute inflammation marker by Avanzas et al. for the first time, in acute myocardial infarction patients [4]. Later on, in 2014, in a study conducted by Farah et al. [15], it was determined that there was a statistically significant difference between the serum NLRs of the patients with chronic H. pylori gastritis detected by urea breath test and the gastritis patients without H. pylori infection. Jafarzadeh et al. [16], stated that elevated serum leucocyte counts and NLR can be a marker of inflammation and infection among H. pylori infected peptic ulcer patients. The authors found a significant difference between the mean serum neutrophil count and serum NLRs of the peptic ulcer patients infected by H. pylori and the H. pylori negative control group.