The clinical character of hand-foot-and-mouth-disease (HFMD) with neurological manifestation: A report of 22 death and 36 recovered cases

Background: Outbreaks of hand-foot-and-mouth disease (HFMD) have occurred in many parts of the world, particularly in China. The disease usually has ease of communicability and a higher risk of developing severe complications leading towards death. In this study, we aim to evaluate the clinical features, laboratory examination, and treatment for serious cases of HFMD, using a retrospective analysis based on clinical data.

Methods: We report the clinical features of 22 deceased patients with confirmed diagnoses of HFMD, who presented to hospitals in the Shanxi Province of China between June 2010, and August 2012. Demographic, clinical and laboratory data from inpatients were collected.

Results: The findings of this report showed that Enterovirus 71 (EV71) is the causative agent of HFMD, particularly in male children under the age of 3. Some common symptoms including fever, rash, and malfunctioning of respiratory, circulatory, and neurologic systems were observed in all studied patients. However, circulatory failure was the most important cause of death for these patients. Furthermore, increases in the peripheral white blood cell count (>15 × 109/L) and the blood sugar level (>8.3 mmol/L) are among the important reference indices for serious cases. Hence, on time provision of respiratory and circulatory supports enhance the efficiency of a comprehensive treatment strategy.

Hand-foot-and-mouth disease (HFMD) is a common infectious disease in children. During summer 1957, the first outbreak of HFMD was documented in Toronto. In mainland China, some reports about small-scale outbreaks of HFMD appeared in Tianjin and Shandong provinces during the 1980’s. However, during 2008 an outbreak of HFMD at large scale was reported in Fuyang city of Anhui province and led to the death of 22 hospitalized patients. After this incidence, HFMD was classified as a national legal C-class infectious disease. Recently, the number of HFMD cases has been increasing rapidly in mainland China. Therefore, effective monitoring and efficient reporting strategy to deal with HFMD is still needed in some parts of the country.

It has been reported that Enteroviruses, i.e. Coxsackievirus A16 (CV-A16) and Enterovirus 71 (EV71) are the primary causative agent of HFMD. In many cases, these viruses showed clear prognosis and obvious clinical manifestations with a typical self-healing time of one week. However, some children especially those less than three years of age showed a typical clinical symptom with rapid onset of serious complications such as myocarditis, pulmonary edema and aseptic meningitis (Table 1). Multiple system organ failures may be secondary to these severe complications.

Table 1: Physicochemical tests and PCR based identification of viruses in twenty-two deceased/death and 36 recurred patients of HFMD.

Between 2010 and 2013, in Xi'an city, China, about 82892 cases of HFMD have documented, and the incidence of HFMD was 251.32/100,000. A total of 10896 HFMD cases have appeared in Changan region of Xi'an city from 2010 to 2012 with an average rate of incidence is 333.33/100,000. Unfortunately, a total of 22 patients of HFMD, 16 from Xi'an Children's Hospital and 6 from Center Hospital of Hanzhong, passed away during this period. However, 36 patients were successfully recovered from this disease. The current study aims to present a retrospective analysis, showing clinical features, laboratory and imaging examinations, treatment and prognosis to identify the risk factor and complications of 22 deceased and 36 recovered patients.

All patients including recovered as well as deceased included in this study were diagnosed with HFMD. Notably, among 22 deceased patients, 16 were admitted to Xi’an Children’s Hospital between February-August 2012, the other 6 patients were admitted to the Center Hospital of Hanzhong between June-July, 2010. The diagnosis of HFMD in the study was made by paediatricians aided by laboratory tests and neurological images. We summarized the characteristics of these 22 deceased and 36 recovered patients. Data on the patient's vital signs, physical exam findings, and routine laboratory tests were obtained through a retrospective review of the hospital records. The Ethics Committee of the Hospital has approved this study.

The mean age of the patients under study was 24 months, while detailed information about gender and age distribution of the patients is presented in Figure 1. Among those patients unfortunately died includes 14 males and 8 females with the male to female ratio of 1.75:1. This ratio shows that the chances to acquire this disease are higher in males (63.6%) than the females (36.4%). Additionally, in 81.8% cases children younger than 3 y of age became the victim of HFMD, with an average disease course and days of hospitalization was 3 d and 1.5 d respectively. 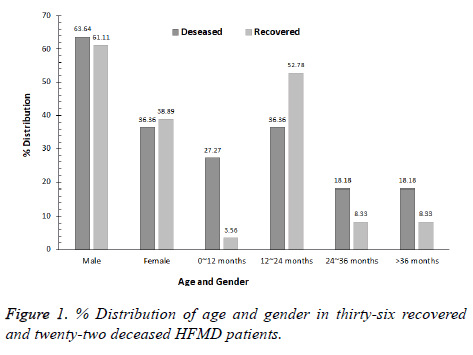 The clinical features observed in this study are abnormalities in the nervous system, respiratory system and circulatory system, etc. All the 22 patients showed symptoms of fever with an average body temperature 38.8°C and rash. Furthermore, in many cases patients under observation showed neurological malfunctioning such as disturbance of consciousness (90.9%), coma (77.3%), convulsions (54.5%), apathy and sluggishness (50.0%), secretions following through throat stimulation (40.9%), as well as respiratory symptoms including rales (100%), and tachypnea and bradypnea (both 77.3%) respectively. However, circulatory failure (68.2%) was found to be the major cause of death for these patients (Figures 1 and 2). 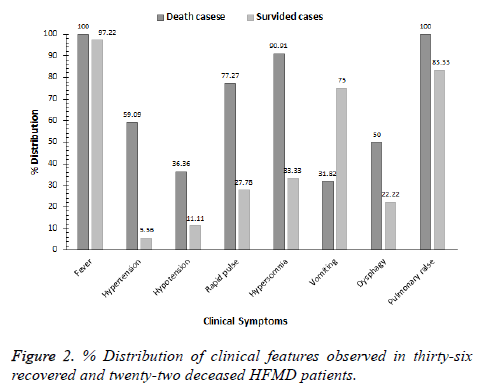 When hospitalized, the average leukocyte count was measured in the patients, and it was 5.2 × 109/L ranging from 0.8 × 109/L to 24 × 109/L. In 5 cases the leukocyte count increased to 22.7%, while in 3 cases the leukocyte count was higher than 15 × 109/L. Contrastingly, a decrease up to 77.3% in leukocyte count was observed in 17 cases with an average lymphocyte count were 1.06 × 109/L ranging from 0.4 × 109/L to 11.07 × 109/L; Moreover, examination of blood sugar revealed an increase of blood sugar in 17 cases where sugar level was higher than 8.3 mmol/l in 11 patients; while sugar level was normal in 4 cases, however, reduction in blood sugar was found in 1 patient. Subsequent PCR-based detection and analysis of nucleic acid in 19 patients confirmed the prevalence of Enterovirus and EV71 in 19 and 17 however, Coxsackievirus and Echoviruses in 1, 1 patients respectively.

Hand-foot-and-mouth-disease (HFMD) represents complications of infectious disease caused by a variety of Enteroviruses, with various clinical manifestations. The primary population infected with HFMD is young children, especially those less than 3 y old. Clinical manifestations of most cases are mild, with typical symptoms being fever and rash, which can be found on the hand, foot, and hip, etc. In a few cases, severe damage occurs to the nervous system, respiratory system, and circulatory system, causing encephalitis, flaccid paresis, myocarditis, pulmonary edema and other complications leading to the death of the patient. By analyzing the clinical features of 22 cases of deceased children with a diagnosis of HFMD. We summarized some highly significant features of the children who have rapidly developed severe conditions (Table 2). The outcomes of this work help clinicians to closely follow changes in the clinical condition to carry out necessary laboratory examinations and to determine the best treatment plan to reduce the rate of mortality. We found that the rate of onset of HFMD is higher in male children as compared to females. Further, the rater of mortality in children younger than 3 y was 81.8%, while this rate was 63.7% in children younger than 2 y. These findings make us put more emphasis on prevention and monitoring of HFMD in children younger than 3 y of age. Etiological examination showed that in most of the cases Enterovirus 71 was found to be the causative agent of HFMD and these findings are in-line with previously documented reports [1-3].

The diagnosis and treatment guidelines for HFMD formulated by Ministry of Health of the People's Republic of China-2010 state that increases in the peripheral white blood cell count (15 × 109/L) and the blood sugar level (>8.3 mmol/L) are among the critical reference indices for severe cases. In this study, patients with increased white blood cells counts and blood sugar levels accounted for 22.7% and 77.3% of cases, respectively [4].

According to the clinical process, HFMD can be divided into five periods: (1) The skin eruption period; (2) The nervous system involvement period; (3) The early period of cardiopulmonary failure; (4) The cardiopulmonary failure period; (5) The recovery period [5,6]. The key to proper diagnosis and treatment is to identify the second and third periods in an accurate and timely fashion.

The following issues are important with regards to treatment [9,10]: For typical cases, symptomatic treatment should be adopted [11,12]. However, clinicians should additionally monitor the patient's blood pressure, heart rate, and breathing and blood sugar levels and perform a neurological examination to improve the understanding of severe cases. Mortality in severe cases is always caused by severe complications [13]. In this study of 22 cases of mortality, 68.2% cases suffered from circulatory failure, 36.4% from NFE and 9.1% from respiratory failure.

Clinicians should master the proper treatment of severe complications to prevent mortality. First, restriction of fluid intake should be taken into consideration for severe cases of cerebral edema, pulmonary edema or cardiac failure. The commonly used treatment for dehydration is a 20% mannitol solution (0.5~1.0 g/kg) given every 4-8 h over 20-30 min via rapid intravenous injection. Second, the application of intravenous immunoglobulin (IVIG) may play a role in treatment for patients presenting with restlessness, frequent convulsions, acute limb paralysis, rapid increases in the breathing rate, cold sweats, cold extremities, and rapid increases in the heart rate [14,15]. The treatment should be given at a dose of 1.0 g/(kg.d) (maintenance for 2 d). Third, methylprednisolone pulse therapy may relieve the cerebral edema and pulmonary edema caused by EV71 [16]. This therapy should be given at a dose of 3-5 mg/(kg.d) and halted as soon as the patient reaches a stable condition (Table 3).

Table 3: Treatments given to 22 deceased/death and 36 recurred patients of HFMD.

Also, mechanical ventilation should be quickly initiated when the patient presents with discordant breathing rhythms, bloody airway secretions, rapid onset of rales, and a frequent conclusion with deep coma, pallor, cyanosis and hypotension. Mechanical ventilation should not be withdrawn prematurely. The indications for withdrawal of mechanical ventilation are as follows: (1) Return of normal spontaneous breathing and cough reflex; (2) The oxygenation index (OI=PaO2/FiO2 × 100)>300 mmHg with chest X-ray improvement; (3) Return of consciousness; (4) Stable circulation; (5) No life-threatening complications present.

When the patient reaches a stable condition, their swallowing capabilities may remain compromised. It may be necessary to continue a special diet and wean mechanical ventilation slowly. Clinicians should also keep a high suspicion for respiratory infection [17-22].

In summary, in our clinical experience patients with serious cases of HFMD should be admitted to the PICU for close observation following diagnosis to receive symptomatic treatment and to avoid serious complications. A modest dose of mannitol should be given early to drop intracranial pressure when the patient presents with neurological symptoms. For new cases, including cases of cardiopulmonary failure and pulmonary edema, the use of intravenous immunoglobulin and hormone therapy is necessary. In these severe cases, clinicians must provide comprehensive treatment including respiratory and circulatory support to effectively treat the pulmonary edema period and reduce mortality.

Authors declare no conflict of interest.