The associations among radiological characteristics, growth, and pathological results of pulmonary subsolid nodules

With the progress of medical imaging technology and the broad application of Computed Tomography (CT), Ground- Glass Opacity Nodules (GGNs) are commonly identified on chest CT images [1]. GGN is a radiological finding on CT, consisting of hazy opacity that does not obscure the underlying bronchial structures or pulmonary vessels [2]. Pulmonary Subsolid Nodules (SSNs) can be classified into nonsolid GGNs and part-solid GGNs [3]. Part-solid GGNs are nodules that present both ground-glass components and solid components through which the underlying lung parenchymal architecture cannot be visualized. Except in a few benign conditions such as focal interstitial fibrosis, focal haemorrhage, or inflammation, GGNs usually constitute invasive pulmonary adenocarcinoma, Minimally Invasive Adenocarcinoma (MIA), Adenocarcinoma In Situ (AIS), or Atypical Adenomatous Hyperplasia (AAH) [4].

A number of recommendations for the management of SSNs have been presented [5,6]. Management of SSNs in the lung, particularly persistent SSNs, remains controversial [7-10]. Fleischner Society guidelines for SSNs recommend no requirement for follow-up surveillance using CT examinations for nonsolid GGNs less than 5 mm, and suggest that persistent nonsolid GGNs larger than 5 mm should be followed-up by yearly CT surveillance for a minimum of 3 y [3].

Several studies have also investigated the natural history of SSNs, reported its indolent clinical course, and various clinical-radiological characteristics that can be used to predict the growth interval of these nodules, but a few of them had pathological diagnosis in cases of SSNs that had no growth during their follow-up period [11,12].

There have been very few long-term follow up studies on SSNs. SSNs grow very slowly or remain unchanged, and it is very difficult to decide whether to resect them at the time of the first CT scan. If the nodules are conservatively observed on follow-up CT scans, we need to determine when or whether to resect them.

In this study, we retrospectively analyzed the progression of persistent pulmonary SSNs (>2 y after the initial scan) on thin-section CT images, evaluated the risk factors for size increases, and analyzed the correlations between size increases and histopathological results.

We reviewed all SSNs recorded on thin-section CT scans at Shanghai Pulmonary Hospital from Feb 2009-2016, including both nonsolid GGNs and part-solid GGNs. Patients with SSNs who fulfilled the following criteria were selected: (1) Had undergone follow-up CT examination for more than 2 y after the initial scan; (2) Nodule size<3 cm; (3) Ground-Glass Opacity (GGO) proportion>50%. Nodules with decreased size or attenuated nodules were excluded. Moreover, patients who had a diagnosis of lung cancer, thyroid cancer, or breast carcinoma were excluded. This study was conducted in accordance with the declaration of Helsinki. This study was conducted with approval from the Ethics Committee of Shanghai Pulmonary Hospital. Written informed consent was obtained from all participants.

CT images were analyzed by two radiologists who had 8 and 7 y of experience, respectively. Information about the nodules including their location, consistency, maximal diameter, and maximal diameter of the solid component (in part-solid nodules), and whether a new solid component developed was recorded. Nodule growth was defined as an increase of more than 2 mm from the maximal diameter of the nodule on the initial CT screening. The correlation between nodules and blood vessels was recorded and the correlation was divided into two types: Type I, vessels circumventing nodule lesions or passing through the lesions without any morphological changes and did not present increasing coarse deformation or other changes; Type II, vessels in the lesion were distorted or rigid or vessels passing through the SSNs with lumen broadening or vessel gathering. Days between the initial CT screening and follow-up CT screenings were calculated. The Volume Doubling Time (VDT) was calculated using Schwartz’s formula [13]: Td=t log2/(3log (Dt/D0)), where Td equals the doubling time, Dt is the maximal diameter of a nodule at the last CT scan, D0 is the maximal diameter of the nodule at initial CT scan, and t equals the time from the initial CT scan to the final CT scan. Any differences in opinion between radiologists were discussed and solved by consensus.

Pathological specimens were obtained from patients who underwent video-assisted thoracoscopic surgery. The specimens were diagnosed by two pathologists who had 8 and 12 y of experience, respectively, following the standard classification of lung adenocarcinoma by the International Association for the Study of Lung Cancer/American Thoracic Society/European Respiratory Society [14]. All differences between the pathologists were resolved by consensus.

We calculated the means and medians. The Pearson χ2 test and Fisher’s exact test were used for categorical data, and an independent sample t test or the Mann-Whitney U test was used for numerical data. A P value less than 0.05 indicated statistical significance. SPSS16.0 was used to perform all statistical tests. 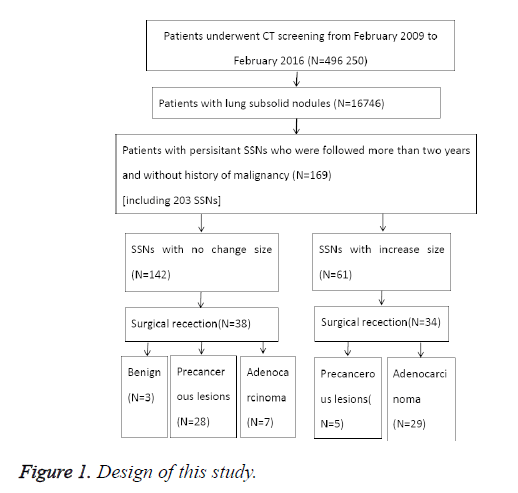 Figure 1. Design of this study.

The type of SSN (nonsolid or part-solid nodule), new development of an internal solid component, and the type of relationship between the SSNs and blood vessels were significantly associated with nodule growth (P=0.002, P<0.001, and P<0.001, respectively) (Table 1).

Pathological results were divided into three groups: Benign (organizing pneumonia), Precancerous lesions (including AAH and AIS) and Adenocarcinoma (include MIA and invasive adenocarcinoma). The pathological diagnosis differed significantly between the stable and growth groups (P<0.001).

The recommendations of the Fleischner Society are that for a persistent nonsolid nodule that is larger than 5 mm, yearly follow-up surveillance CT scans are required for a minimum of 3 y, but in some studies, a few lesions actually began growing after 3 y of observation, although these exceptional cases are in the minority [3,18,19]. We suggest the follow-up time should be extended and SSNs with growth less than 2 mm should be carefully observed and evaluated and should not be categorized into the non-growth group, and resection surgery should be taken into consideration. There were two different types of correlation between nodules and blood vessels. The type I correlation occurred more in stable group SSNs than in growth group and the type II correlation had a higher detection rate in growth group SSNs. Takashima et al. suggested fibro genic response was the main mechanism in the form of small blood vessels in type II correlation between nodules and blood vessels, endogenous and (or) exogenous tumor angiogenesis may also have an effect in lumen broadening of blood vessels [20]. We should evaluate nonsolid nodules not only in terms of size and growth, but also in terms of their diameters, shapes, density, and blood vessel relationships.

The initial nodule size, type of SSN, new development of a solid portion, and type of relationship between SSN and blood vessels were significantly associated with nodule growth. Lesion size is a predictive factor of invasiveness for SSNs [23-25]. For nonsolid nodules, 35 of 51 (68.6%) SSNs with an initial size>10 mm grew, and the proportions of growing nodules<5 mm, 5-7 mm, and 8-9 mm were 9.5%, 7.6%, and 38.0%, respectively. These results support the recommendation that nonsolid nodules>10 mm should be considered for surgical resection [15,26]. We observed growth of a 3.4 mm and a 4.8 mm nonsolid nodule. The nodule that was initially 3.4 mm was resected, and the pathological diagnosis was invasive adenocarcinoma. Although recommendations of the Fleischner Society suggest solitary nonsolid GGNs measuring 5 mm or less do not require follow-up CT scans, we suggest 5 y or more follow-up CT scans should be considered [3].

Our study has several limitations. First, it was retrospective in design and the follow-up times were heterogeneous. Second, 16,577 of 16,746 patients were followed-up or underwent resection after less than 2 y, or had a history of lung cancer, thyroid cancer, or breast carcinoma because of which they were excluded from this study. Third, 108 of 169 patients did not undergo surgical resection and did not have pathological results. Fourth, it was difficult to accurately evaluate stability or growth of these nonsolid nodules.

In conclusion, nodule growth is important in distinguishing malignant nodules from benign and precancerous lesions; 30.0% of nonsolid nodules grew after findings on follow-up CT scans were evaluated for >2 y. Size (>10 mm), SSN type, development of a solid portion, and the type of relationship between an SSN and blood vessels could be useful in predicting nodule growth.