The association of diabetes mellitus and gender with risk of bone fractures: A systematic review and meta-analysis

Bone fracture shows a growing trend. This increase is a result of several factors occurs. In this study, a meta-analysis was performed to examine the relationship of fracture risk with Type 2 diabetes mellitus and gender. For this purpose, we searched the credible databases including PubMed, ISI, and Scopus for the related epidemiologic studies that were published up to May 2016. The data provided in these articles was extracted and then analyzed by a random-effects model. Funnel plot was used to check for publication bias. Statistical analyses were carried out by R version 3.2.1 and STATA (version 11.1). After filtering irrelevant articles, 30 studies were selected for meta-analysis. The analyses showed that type 2 diabetes mellitus is positively associated with overall fracture risk (summary RR=1.05, 95% CI: 1.04, 1.06). The incidence of fractures was higher in men than in women (Phet=0.043). The interpretation of the meta-regression showed that no significant relationship exists between the gender risk factor in diabetic patients and years of study (P=0.280). The results highlight the importance of adopting suitable strategies for prevention of bone fracture in T2DM patients.

Type 2 Diabetes Mellitus (T2DM) is a metabolic disorder appertaining to hyperglycemia associated with insulin secretion and resistance disorders [1,2]. Patients with Type 2 diabetes mellitus often suffer from not only direct micro and macrovascular complications, but also indirect skeletal disorders, such as fragile bones and frequent bone fractures [3]. The latter effect is the result of multiple and sometimes contradictory associations between diabetes and bone quality as well as possible impact of diabetes on bone turnover [4,5].

Research has shown that patients with Type 2 diabetes mellitus have a normal to elevated Bone Mineral Density (BMD) and because of this association, there used to be a common misconception that these patients are safe against osteoporosis [6]. But later, it became clear that in T2DM patients, BMD is only one of several fracture risk factors, and despite their elevated BMD, these patients have a higher risk of bone fracture [7,8]. Thus, diabetes may be associated with a reduction of bone strength and develop bone fragility that is, not reflected in the measurement of BMD [6].

Further studies in this regard showed that how diabetes affects the fracture risk depends on gender and age of patient, history of decease and medication, and the location of fracture, [6,9-11]. Research has shown that fracture risk is directly associated with disease duration, the presence of diabetic complications, inadequate glycemic control, and insulin use [12].

In this study, the credible databases including PubMed/ Medline, Scopus, and ISI Web of Knowledge were searched for all articles with keywords “diabetes mellitus” , “type 2 diabetes mellitus”, “glucose”, “insulin”, “fracture”, ‘‘bone”, “osteoporosis”, “bone mineral density” and “risk factors”, in the time frame of 1980 to May 2016. The search was narrowed down to the articles that contained the aforementioned keywords in their title or abstract. The references of the found articles were also reviewed in search for other articles. The list was also narrowed down to human researches. To decrease the bias, all steps of search, elimination of irrelevant papers, and extraction of data from articles were performed by two researchers working independently.

All epidemiologic researches on the relationship of T2DM with the risk of fracture in hip (low-trauma), distal forearm, proximal humerus, ankle, and foot, and non-vertebral or vertebral fractures, were included in the study. After compiling a secondary list, we excluded all studies on individuals with T1DM (Type 1 Diabetes Mellitus) or IGT (Impaired Glucose Tolerance), the studies where data required for analysis of standard errors for effect estimates was not provided, all metaanalyses and systematic reviews, the studies with duplicate citation, the studies with parallel reports for the same population or cohort, and dated studies for which we found a recent counterpart.

After finalizing the compilation of studies, we extracted, from every study, the name of the first author, year of publication, country, study design, sample size, gender of subjects, number of fractures, fracture risk estimations and their confidence intervals, factors controlled for by matching or multivariable analysis and adjustment for potential confounders. This data extraction was performed in line with a standard protocol by two researchers working independently, who reviewed the abstracts as well as full articles. Afterwards, a meeting was held and differences between the findings of two researchers were discussed and resolved. The findings were organized into data collection forms and then imported into Microsoft Excel.

Meta-analysis was performed using the logarithm of the relative risk and the corresponding standard error. The relative risk estimates and their 95% confidence intervals were acquired by the method of Der Simonian and Laird.

Heterogeneity of the studies was evaluated by the Cochran’s Q, meta-regression and I2. Since studies were highly heterogeneous, we used the random effects model. In search for the sources of heterogeneity, a meta-regression analysis was performed. In this analysis, gender, duration of follow-up, and duration of decease were used as independent variables and the log relative risk was considered as the dependent variable. Publication bias was evaluated with the help of funnel plots and Egger test. A pre-specified sensitivity analysis was also conducted. Statistical analyses were performed using statistical two-sided tests in R Software 3.2.1 and STATA 11.1 with P<0.05 considered as the level of significance (in heterogeneity tests).

In the initial search, we found about 1200 articles published between 1980 and 2016, but after narrowing down the list by eliminating the irrelevant works, this number was reduced to 203. Of these 203 articles, 91 were eliminated after review of abstract, and the remaining 112 articles were reviewed in full. In this full-text review, we found 30 epidemiologic studies (2 case-control and 28 cohort studies) on the relationship of T2DM and fracture risk (Figure 1) [10,11,20-47]. Table 1 shows the highlights of data extraction procedure. 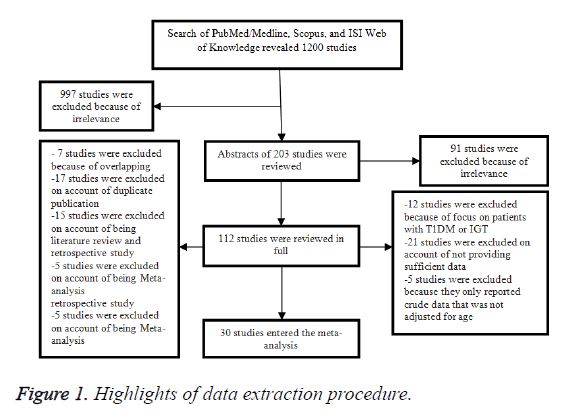 The primary meta-analysis was performed on all 30 studies found in the literature, which included 2 case-control and 28 cohort studies. After finding that reported prevalence is highly heterogeneous (P<0.001), it was decided that meta-analysis should be performed through random effect method.

We included 30 studies in the primary meta-analysis (Figure 1).

Characteristics reviewed articles about associated diabetes mellitus and risk of bone fractures is presented in Table 1. 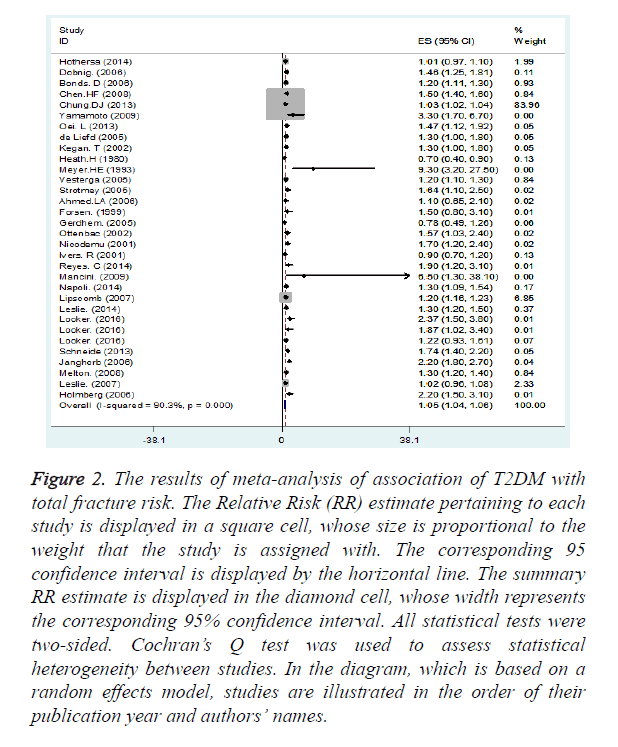 Figure 2. The results of meta-analysis of association of T2DM with total fracture risk. The Relative Risk (RR) estimate pertaining to each study is displayed in a square cell, whose size is proportional to the weight that the study is assigned with. The corresponding 95 confidence interval is displayed by the horizontal line. The summary RR estimate is displayed in the diamond cell, whose width represents the corresponding 95% confidence interval. All statistical tests were two-sided. Cochran’s Q test was used to assess statistical heterogeneity between studies. In the diagram, which is based on a random effects model, studies are illustrated in the order of their publication year and authors’ names.

Nine and thirteen studies had reported the association between T2DM and fracture incidence in female and male, respectively. We found statistically significant positive association between T2DM and overall fracture incidence in female (summary RR=1.05, 95% CI: 1.04, 1.06) (Figure 3) and in male (summary RR=1.13, 95% CI: 1.10, 1.17) (Figure 4). 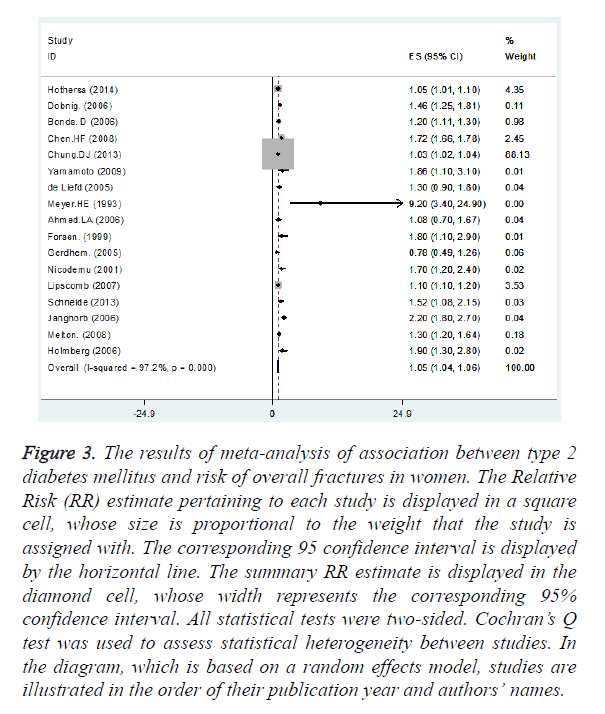 Figure 3. The results of meta-analysis of association between type 2 diabetes mellitus and risk of overall fractures in women. The Relative Risk (RR) estimate pertaining to each study is displayed in a square cell, whose size is proportional to the weight that the study is assigned with. The corresponding 95 confidence interval is displayed by the horizontal line. The summary RR estimate is displayed in the diamond cell, whose width represents the corresponding 95% confidence interval. All statistical tests were two-sided. Cochran’s Q test was used to assess statistical heterogeneity between studies. In the diagram, which is based on a random effects model, studies are illustrated in the order of their publication year and authors’ names. 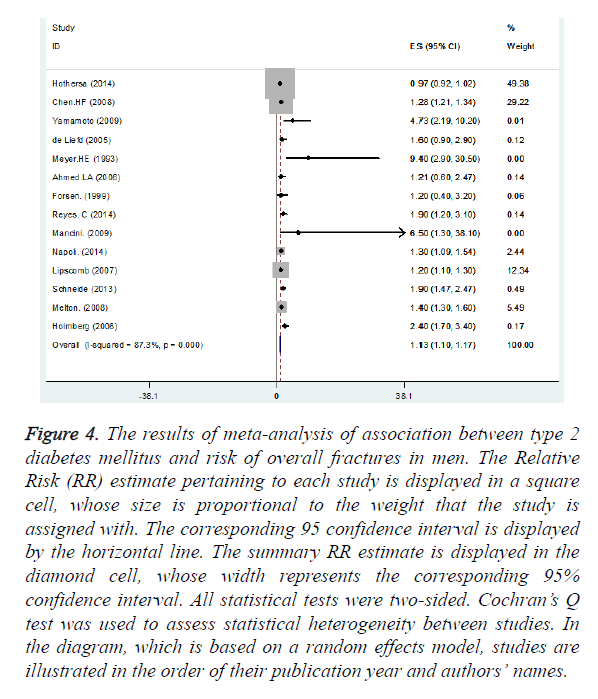 Figure 4. The results of meta-analysis of association between type 2 diabetes mellitus and risk of overall fractures in men. The Relative Risk (RR) estimate pertaining to each study is displayed in a square cell, whose size is proportional to the weight that the study is assigned with. The corresponding 95 confidence interval is displayed by the horizontal line. The summary RR estimate is displayed in the diamond cell, whose width represents the corresponding 95% confidence interval. All statistical tests were two-sided. Cochran’s Q test was used to assess statistical heterogeneity between studies. In the diagram, which is based on a random effects model, studies are illustrated in the order of their publication year and authors’ names.

The results of meta-analysis of association of T2DM with fracture risk by sex showed although there was a statistically significant positive association between T2DM and overall fracture incidence in both men and women; the estimation of summary was stronger in men than in women (Phet=0.043) (Table 2).

Table 2. Gender risk factors for the association between type 2 diabetes and fracture risk.

The publication bias tests found no significant bias effect in these studies. In the Begg’s regression asymmetry test, P value was found to be 0.32 (Figure 5). 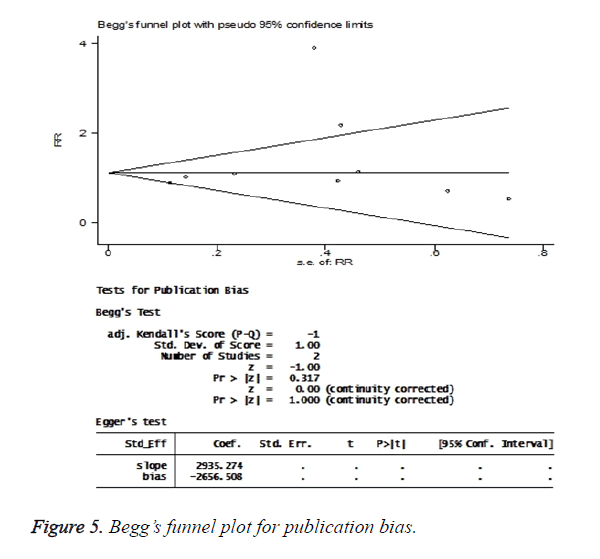 Meta-regression analysis found no significant relationship between the diabetic patients’ gender risk factor and the year of study (P=0.280).

The results of this study provide an overview of the relationship of T2DM and fracture risk, which are two important medical conditions with social and economic consequences for the patients and society. Previous studies have given inconsistent results in regard to the relationship of diabetes and overall risk of fracture, as some have reported significant positive association between these two while others have found no such relationship [11,25,26,28,34,38,40,43,47].

The present study suggests that there is indeed a positive relationship between T2DM and total fracture risk (summary RR=1.17, 95% CI: 1.15, 1.20), which supports the reports of previous meta-analyses on this particular subject [6,9]. Sex specific differences may exist, reflecting differential patterns of bone apposition between sexes (bone dimorphism) [48]. Also there might be gender differences in bone metabolism, which could be due to differences in body composition and differences in sex hormones (e.g. postmenopausal status in most studied women) [2]. A direct interaction between estradiol and IGF-I in the determination of periosteal apposition has been proposed, and serum IGF-I levels are negatively associated with increased risk for prevalent fractures in postmenopausal women but not in men with type 2 diabetes [19,48-50].

In the present study, it was found that diabetic women have a lower overall risk of fracture than diabetic men (Phet=0.043).

There are reports suggesting the presence of hypogonadism in 21-64% of male T2DM patients especially among elderly, so diabetes-induced hypogonadism can be counted among the risk factors of secondary osteoporosis. From another perspective, it has been shown that smoking, alcohol consumption, anticonvulsant treatment, physical inactivity, and low free androgen index significantly increase the relative risk of fracture in men [51-54].

The results of this study point to the significant effect of T2DM on the public health impact of fractures. The limitations of this meta-analysis included the inability to assess the effect of ethnicity because of lack of sufficient data about such association in different ethnicities, and also the lack of sufficient BMD data that may contribute to the observed relationships, which makes it impossible to control the impact of BMD on this relationship.

There was also the incidence of fractures increased in T2DM men than in T2DM women. Overall, the results of this metaanalysis strongly support an association between type 2 diabetes and increased risk of any fracture. With a worldwide increasing prevalence of diabetes, the contribution of diabetes to the incidence of low-trauma fracture may increase.

The results of this study provide an overview of the relationship of T2DM and overall fracture risk and highlight the need for new risk prediction models that would be able to account for the risk of diabetes-induced osteoporosis fracture.

This study was supported by Deputy of Research and Technology, Ilam University of Medical Sciences (No. 941030/166).