Purpose: The aim of this study was to investigate the relationship between myocardial infarction scar and ventricular Remodeling by Delayed-Enhancement Magnetic Resonance Imaging (DE-MRI).

Methods: From June 2009 to May 2013, 20 patients with coronary heart disease who didn’t have a history of acute onset in the last three months were admitted. All patients were diagnosed by DE-MRI. The data including Left Ventricular (LV) Systolic Wall Thickening (WT), Wall Thickening Rate (WTR), Wall Motion Score (WM) and Ejection Fraction (EF) were analysed by Argus software. The myocardial infarction scar score was analysed by DE-MRI according to segment number and transmural extent.

Conclusion: The myocardial infarction scar score by DE-MRI was negatively correlated with the WT, WTR and EF but scar burden by DE-MRI is strongly and positively correlates with Regional Wall Motion Abnormality (RWMA). Further studies with a larger number of samples are warranted.

Coronary atherosclerosis is a chronic disease with stable and unstable periods and the most common cause of death worldwide. During unstable period, patients may develop a myocardial infarction scar [1]. Myocardial Infarction (MI) scar is a major reason of death and disability for human health. Remodeling was first proposed by Hockman and Bulkley. The concept was applied in the study of scar tissue instead of necrotic tissue for cardiac repair [2]. Until 1990’s, ventricular remodeling was regarded as an important cause of heart failure and the new direction of treatment, which began to attract people's attention. Ventricular remodeling was defined as the structural changes in the left ventricular topography, occurring both acutely and chronically after infarction. There are three major patterns, including concentric remodeling, eccentric hypertrophy and myocardial infarction [3].

Cardiac Magnetic Resonance Imaging (CMR) is an important non-invasive approach for the assessment and risk stratification of patients with MI [4]. It can not only accurately assess Left Ventricular (LV) volumes and function [5] but also detect and quantify the extent of both acute and chronic MI [6,7]. In addition, with high spatial resolution and contrast-to-noise ratio, CMR may allow detailed characterization of infarcts by differentiating the core and peripheral regions [4]. Of the CMR methods, Delayed-Enhancement Magnetic Resonance Imaging (DE-MRI) has been considered as the best imaging method for ventricular remodeling. It is able to assess wall thickening of Left Ventricular Systolic (WT), Ejection Fraction (EF), Wall Motion (WM) and contraction and relaxation of overall or regional quantitatively [8]. All these indicators are valuable for the study of ventricular remodeling. In addition, the advantages of DE-MRI on the observation of myocardial infarction scar have been confirmed by many studies. Ibrahim et al. [9] demonstrated that DE-MRI can detect small myocardial scar which cannot be detected by SPECT. Thus, it is more sensitive than SPECT. Another study also showed that DE-MRI can detect approximate 2 g of myocardial infarct, while the SPECT only can detect 10 g [10]. However, there are few studies on the WT, WM, EF and cardiac function changes detected by DE-MRI [11]. Our study was conducted to investigate the association between myocardial infarction scar detected by DE-MRI and ventricular remodeling.

This cross sectional study was approved by the institutional review board of the Second Affiliated Hospital, Kunming Medical University. Written informed consent was obtained from each subject. Twenty patients (16 men, 4 women, age range: 26-72 years; mean age: 53.3 ± 11.6 years) with coronary heart disease who had no a history of acute onset in the last three months undergoing MRI examination were included from June 2009 to May 2013. The diagnosis was in accordance with the clinical diagnostic criteria of Universal Definition of Myocardial infarction scar, which defined by expert consensus document 2007 European Society of Cardiology (ESC) and the American Heart Association (AHA) jointly.

Patients were excluded if they met the following criteria: (1) Patients with atrial fibrillation or sustained arrhythmias. (2) Patients had medical history or radiographic evidences of other cardiomyopathy or valvular disease. (3) Patients with severe liver or kidney dysfunction caused by liver or kidney organic diseases. The value of serum creatinine was above 2.0 mg.dL-1 and the value of AST or ALT was 5 times more than the upper limit of the normal. (4) Patients with contraindications of MRI, such as body metal implants and claustrophobia. (5) Patients with diagnostic evidence of acute myocardial infarction scar from Electrocardiography (ECG) and clinical biochemistry inspection. (6) Patients could not coordinate MRI examination.

SPSS13.0 software package for Windows (SPSS, Chicago, IL) was used for statistical analysis. Normal distribution data was expressed as means ± SD and non-normal distribution data was expressed as median. Pearson or Spearman's rank test was used to evaluate the association between myocardial infarction scar detected by DE-MRI and ventricular remodeling as appropriate. A P-value of less than 0.05 was considered statistically significant. 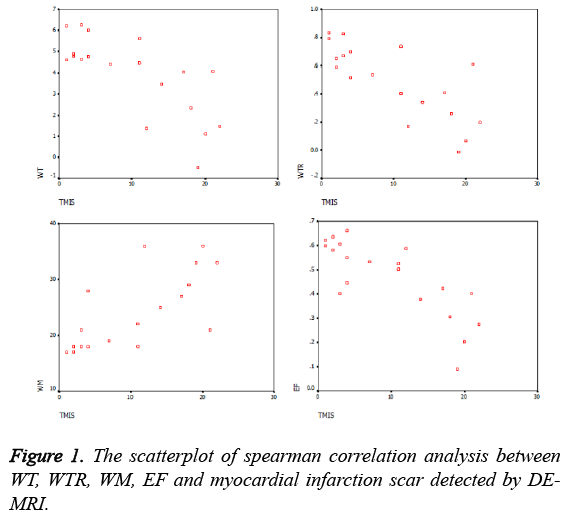 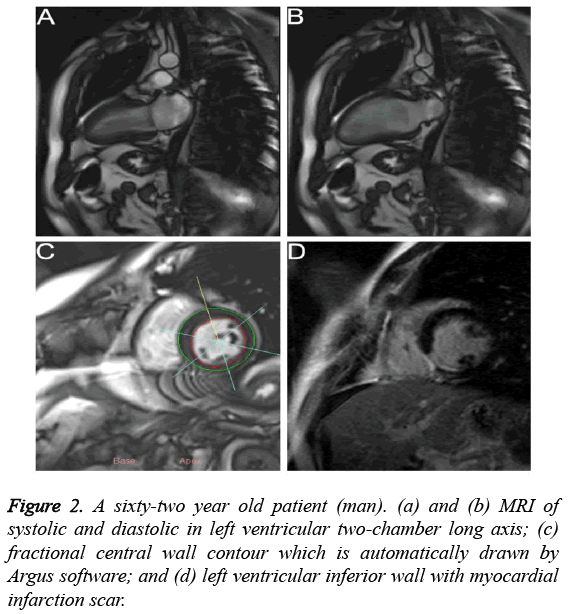 Ventricular remodeling is a very complex process and the accurate mechanisms are still unknown. The current common accepted mechanism of post-infarction remodeling is that the process can be divided into two stages: the early stage (72 h or less) and the later stage (>72 h) [13]. After early acute myocardial infarction scar, myocardial cells elongate and deform, which may lead to early ventricular rupture or aneurysm formation [14]. After the formation of myocardial infarction scar, the regional wall becomes stiff, while the elasticity and contractility decrease. In order to maintain a certain amount of blood in the heart to maintain the life activities, the periphery of non-infarcted myocardium is required to increase work burden. Long term of contraction reinforcement will lead to the hypertrophy and deformation of edge and the peripheral edge of non-myocardium. Such changes in the pathophysiology of heart may last for several weeks to months, until the eccentric expansion factors are offset by fibrous scar tension [15]. MRI tagging suggests that myocardial infarction scar remodeling involves not only the infarct zone, but also overall ventricle by [16]. Ventricular remodeling after myocardial infarction scar will directly affect cardiac function by reducing the EF of patient and increasing the incidence of cardiac adverse events [17].

How to effectively control the ventricular remodeling is the key for treating heart failure after myocardial infarction scar. Due to the detected value of Atrial Natriuretic Peptide (ANP) and Brain Natriuretic Peptide (BNP) are correlated with the size of infarct scar and the degree of heart failure, they are used to evaluate heart failure [18]. However, they cannot directly reflect the specific morphology of left ventricular remodeling. Echocardiography is a classical clinical method for visually evaluating ventricular morphological change, which has the advantages of simpleness, fastness, no radiation and low price [19]. However, it has limitation with regard to the subjectivity. In addition, due to the limitation of the window ribs, the probe deviated from the apex and the selection is enslaved to subjective factors of operator. All these impair the accuracy of the measurement of WT and EF [20]. Moreover, echocardiography has other disadvantages such as low spatial image resolution, large measured value and poor reproducibility.

MRI takes advantage of the fast imaging technique. A cardiac cycle can obtain tens of frame images and display a continuous film. The measurement of the cardiac function parameters does not depend on the assumption of the ventricle shape, which is less affected by the operator subjectivity and has high repeatability [21]. All these advantages couple with high spatial resolution and soft tissue resolution, equal cardiac signal and high blood pool signal in sharp contrast, which helps the acquired images provide high-quality information on cardiac anatomy and improve the measurement accuracy of cardiac function, WT and other aspects [22]. A previous report suggested that the detection of cardiac function by MRI and echocardiography has no significant difference, but the EF value of echocardiography is higher than MRI [23]. In addition, MRI may display its "one-stop" superiority that myocardial infarction scar scope, size and transmural extent can be detected simultaneously, especially for small scar and endocardial myocardial infarction scar which are difficult to detect by echocardiography and radioisotope scanning. Therefore, the MRI benefits the study of left ventricular remodeling after myocardial infarction scar.

In this study, myocardial infarction scar integral has a positive correlation with WM: the higher DE-MRI scores, the higher WM, suggesting obvious WM decrease or even reverse movement and aneurysm formation. Previous studies also showed that the thinning of ischemic ventricular wall and the decrease of partial motion had diagnostic value for myocardial infarction scar. When coronary ischemia occurs, segmental WM abnormalities are showed first, which is due to the decrease of coronary blood supply and related regional myocardial contractility. In our study, DE-MRI detection of myocardial infarction scar integral is negatively correlated with WT, WTR and EF: the higher DE-MRI scores, the worse WT and WTR and the lower EF. The mechanism is closely related to left ventricular remodeling. Ischemic myocardium remodeling includes phenotypic change of cardiomyocytes, myocyte death, fibrosis, vascular deficiency, myocardial hypertrophy, lack mitochondria, Ca2+ transport barriers, myosin bradykinesia and non-infarcted myocardial tissue hypertrophy [24]. All these remodeling lead to significant decrease of myocardial contractility, coupled with the role of ventricular pressure, resulting in significant thinning of ventricular wall and decrease of WTR and WM, eventually leading to reducing heart pumping and decreasing EF value.

Previous animal experiments showed that ventricular remodeling and consequent changes in left ventricular cardiac function had a linear relationship with infarct size [28]. Clinical study also showed that myocardial infarct size, coronary occlusion and other factors can be used as ventricular remodeling predictors [29]. Our study also confirmed that DEMRI detected myocardial infarct scar size and transmural extent have a high correlation with left ventricular remodeling index, which ultimately affected the cardiac function. The WT and WTR directly reflect pathophysiology changes of ventricular wall morphologically. Local WTR abnormalities are the earliest and the most direct expression of myocardial contractile function. Yamashita believed that quantitative analysis of local WTR played an important role in the comprehensive analysis of cardiac function, perfusion, and metabolism of the patients with coronary artery disease [30].

The myocardial infarction scar score by DE-MRI was negatively correlated with the WT, WTR and EF but scar burden by DE-MRI is strongly and positively correlates with Regional Wall Motion Abnormality (RWMA). Further studies with a larger number of samples are warranted.