The association between body mass index, lipid profiles and total cholesterol among married versus spinster.

Background: Previous epidemiologic studies have revealed that cumulative body mass index (BMI) is allied with higher total cholesterol and low-density lipoprotein cholesterol (LDL). However, these scholarships were limited by the underrepresentation of obese subjects according to Shamai. Objective: To evaluate the association between body mass index (BMI) and total cholesterol among some Algerian women's. Methods: A case-control study was performed involving some worker’s women and spinster in OPAPS laboratory for the academic years (2015-2016). All participants in this study accepted to venous blood withdrawal under fasting conditions and anthropometric measurement (body weight, body height and body mass index). The datum was performed by SPSS 22 using Levene’s statistic, T-test independently and correlation of Pearson. Result: the samples included 36 females 18 spinsters and 18 married, their average age 22.75 ± 2.56 years. The homogeneity of the two groups was based on administrative workers with the same education and the social status. Founded on the statistical applied, we confirm that cholesterol level increased with increasing BMI case women married in the opposite of a spinster. Conclusion: Upper BMI was inversely associated with HDL and TG in the benefit of a spinster. Although the association between BMI and both HDL and TG may be explained by oral contraceptives causing a decrease in Apoprotein, cholesterol, HDL, triglycerides the case of married women. In contrast, our findings are in conformity with the similar studies which advised the positive relationship between BMI and triglycerides related to lower HDL cholesterol and its relationship to lipoprotein lipase activity.

The influence of body weight on serum lipids is often overlooked in clinical practice [1,2]. Whereas obesity is becoming a worldwide public health problem and it is expected to worsen as its prevalence is increasing in Algerian population [3]. Several data have reported that obesity is related to Higher BMI associated at all ages with a higher plasma triglyceride level, lower HDL cholesterol level, and higher total and non- HDL cholesterol levels, which contributes to the development of the metabolic syndrome [4]. To evaluate the association between body mass index (BMI) and total cholesterol among some Algerian women's. This controlled study was performed involving some worker women, married versus spinster, them homogeneity, was based on administrative workers were out total sample are secretaries, with the same education and the social status (No children). Where the only difference between them resides in marriage and it's devotions, the example of the use of birth control [5] for family planning [6-8]. Whereas the first warnings about possible side effects from oral contraceptive use emerged from the United Kingdom, where an increased risk of heart [9] as weight gain, fluid retention, and nausea [10].

However, in the Algerian community, this subject is a taboo topic that women’s knowledge of newer contraceptive methods is still limited [11]. Our involvement based on the fact “Every medication seems to have its problems” [12]. Seen that the aim of the current study was to describe the correlation between lipid profiles and body mass index between married women and spinster, in order to provide baseline information for future analytical studies (Figure 1). 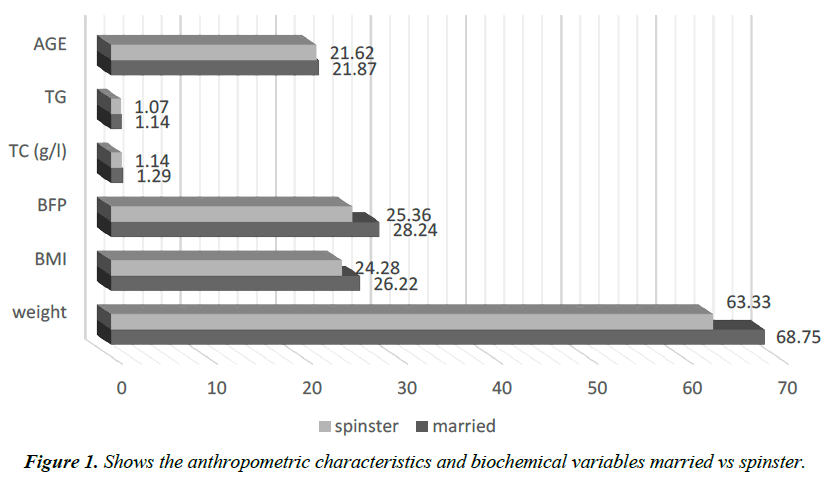 Our intervention in this study is limited in the interpretation of the analysis of medical assessments.

We studied a sample of 36 females 18 spinsters and married their average age 22.75 ± 2.56 years. They were selected by the intentional method because they voluntarily agreed to venous blood withdrawal under fasting conditions. All participants were healthy non-smokers not engaged in planned physical activity, the only difference between them resides in marriage and its devotions, the example of the use of birth control. All were informed about procedures and all provided their written consent. The study protocol was accepted by the Institute Physical Education and the Sports University of Mostaganem.

1. As a condition of experimentation, we are focused on:

3. Both samples has normal menstruation cycle.

4. All participants follow the NHS weight loss guide during the experiment. Sticking to a calorie limit of no more than 1,400 kcal for most women.

Participants were asked to refrain from physical activity for 48 h before blood sampling. They were tested in the morning (8:00-8:30 a.m.), After an overnight fast. Venous blood was collected under aseptic conditions into plastic tubes containing anticoagulant and centrifuged at 4°C. Plasma was stored at -70°C until analysis [9].

Triacylglycerol’s (TG), total cholesterol (TC), and cholesterol were assayed calorimetrically. All variables were determined using commercial kits (laboratory of Dr. Bajaj Committee Zhana). All analyses were run in duplicate for the two groups. All results used in this research are derived from a medical assessment of passions.

The study was a comparative study married women versus spinster in the OPAPS laboratory for the academic years (2015- 2016), they agreed to venous blood withdrawal under fasting conditions and anthropometric measurement (body weight, body height and body mass index). The data were analysed by SPSS 22 using Levene’s Statistic, t-test independent and correlation of Pearson.

Baseline characteristics of the participants are presented in Table 1. According to BMI standards, our total sample is overweight confirmed by the standards elaborated by the World Health Organization (WHO) [14,15] in the opposite of BFP which is in moderately overweight category according to Zerf Mohammed [16]. Whereas triacylglycerol’s (TG), total cholesterol (TC) are in good profile according to Linda Brannon and Jess Feist [15]. While based on the Levene Statistic our total sample is homogeneous in age and weight in the opposite of the other variables.

Through the Figure 1, Tables 2 and 3, our results are in conformity with the studies which advised that the changes in lipid levels are predictors of blood pressure, total cholesterol, and body mass index [16]. Since that, we accept that lipid profiles are adversely affected, with increased triglycerides and total cholesterol, as a result of contraceptive pills [17]. Where our background confirms our results the case of a total sample as manners lifestyle which is strongly negative that carbohydrate metabolism during treatment with estrogen, progestogen, and low dose oral contraceptives influence the lipids and highdensity lipoprotein cholesterol concentrations [18,19]. In assumption, we agree that the progestin component causes decreases in HDL, total cholesterol, and triglyceride levels and increases LDL-cholesterol [20]. Whereas in our case study, we approved that the risk begins if the serum cholesterol is greater than 200 mg/dL and serum triglycerides greater than 150 mg/ dL [21]. Agreeing to the values of BMI, we approve that the use of oral contraceptive pills, among women aged 15 to 45 increased the effect of obesity [22]. Since the proposed design within this study, we submit that the use of contraceptive pills requires practice sports to reduce the effects of body gain [23] and the coronary heart disease risk [24-26]. View the higher BMI is associated at all ages with a higher plasma triglyceride level, lower HDL cholesterol level, and higher total and non- HDL cholesterol levels [2].

Table 2: Shows the variances between the women married and a spinster.

Correlation is significant at the 0.01 level (2-tailed).

Table 3: Shows the correlations between the variables chosen to study case the women married and a spinster

On the bass and limitation of our study, we found that programs calorie limit of diet as healthy eating request physical activity advice to reduce improvements in lipid levels. Where our married sample should include more emphasis on achieving and maintaining the ideal weight. Seen their lipid profiles are strongly negative and significant associated with body mass index level and total cholesterol. Reported in the similar studies to the side effects of medications which have complications such as weight gain. The case of our married women dealing with estrogen, progestogen as useful drugs in preventing pregnancy, promoting weight gain related to lower HDL cholesterol level, and higher total and non-HDL cholesterol levels according to the literature reviewed in this topic.