The Canadian Risk (CANRISK) is a self-administered questionnaire that identifies people at high risk for developing type 2 diabetes. The purpose of this study was to translate the CANRISK into the Arabic language and evaluate the reliability and validity of the Arabic version of the CANRISK (ARABRISK). In this cross-sectional study design, the CANRISK was first translated into Arabic according to the World Health Organization forward/ backward translation protocol for translating assessment tools. Subsequently, the ARABRISK was administered to a convenience sample of people in Jordan and in the capital of Saudi Arabia (Riyadh). The test-retest reliability and convergent validity of the ARABRISK with fasting plasma glucose (FPG) were examined. A total of 538 participants were recruited from Jordan and Riyadh. The ARABRISK total score ranged from 3-59 (mean=25, SD=12). The ARABRISK score reflected high agreement for test-retest reliability (ICC3,1=.98, CI=.97-.99) and correlated significantly with FPG (r=0.3, P=.01). The ARABRISK was developed and reflected high reliability and validity in Jordan and Riyadh.

Diabetes and predictions for future prevalence and associated health care costs are a concern worldwide. Utilizing the results of multiple studies conducted prior to 2004, Wild et al. extrapolated the data and estimated the prevalence of diabetes worldwide to be 2.8% in 2000 with a predicted increase to 4.4% worldwide by 2030 [1]. The World Health Organization (WHO) and the American Diabetes Association (ADA) have both established criteria for the diagnosis of diabetes. In the Netherlands, a population-based cohort study revealed that, according to WHO guidelines defined in 1999, the incidence of diabetes in the study population was 9.9%. Using the ADA’s guidelines, the incidence was slightly lower, at 8.3% of the study population [2].

Diabetes, and associated healthcare costs, is a concern of Arab countries as well. In a study of 1997, it was found that the overall rate of non-insulin-dependent diabetes Mellitus (NIDDM) in Jordan was 13.4% throughout the study population, and its rate increased with increasing age. Moreover, 9.8% of the same population demonstrated an impaired glucose tolerance (IGT). It was also found that high blood pressure, high cholesterol and triglycerides, sex, family history of DM and age were independently linked to DM. In addition, with increasing life expectancy of the Jordanian population, the rate of DM was expected to increase. An increased incidence of diabetes, increased rate of DM-related complications [3]. Ten years later in a cross-sectional follow-up study, Ajlouni et al. found an increase in the rates of DM from the 13.4% in 1997 to 17.1% in 2007. A 7.8% rate of impaired fasting glycemia (IFG) was also noted. What was found to be of even more concern was the fact that, of those who had been diagnosed with DM, 54% of them continued to demonstrate poor glycemic control at the time of the study [4].

Rate of diabetes were noted to be high throughout many Arab countries [5,6]. In a study of 95 overweight (BMI >27) Arabs at an Israeli clinic, 27% of the subjects showed previously undiagnosed diabetes and another 42% demonstrated impaired fasting glucose and abnormal oral glucose tolerance or both. It was also evident that increased BMI significantly correlated with increased rate of abnormal glucose metabolism [5]. It is estimated; the amount of money spent worldwide on diabetes could be nearly 490 billion United States Dollars (USD). In Saudi Arabia, the estimate for 2030 is nearly 3 million USD, or an average of 682 USD per person [6].

Both IGT and IFG are utilized for diagnosis of DM. In deVegt’s study in a Dutch population, both IGT and IFG were utilized for the diagnosis of DM [2]. However, several tools have been created to assist medical professionals in quick, effective and non-invasive monitoring of risk factors that can contribute to diabetes [7-10]. Using information typically collected during general practice visits, such as smoking history, body mass index, gender, age, family history and use of antihypertensive or steroid medications, a diabetes risk score was created to predict a patient’s risk of diabetes [7]. Other tools that were created to serve the same purpose including the diabetes risk calculator [8], and the tests to assess likelihood of fasting glucose impairment (TAG-IT) [9], and the Finnish diabetes risk score (FINRISK) [10]. By utilizing the United States’ National Health and Nutrition Examination Survey (NHANES) for 2005-2006, 6 models (AGRA-6) were created to assess patients’ risk for having abnormal glucose without the necessity of blood glucose testing. Using these 6 algorithms, IFG and/or IGT levels, diagnosed and undiagnosed diabetes and pre-diabetic state can be predicted in a patient with sensitivity of 30-90%, depending on the particular model [11].

The Canadian Risk (CANRISK) is another tool designed to screen diabetic or pre-diabetic patients [12]. Based upon the Finish Diabetes Risk Score (FINRISK) [9], the CANRISK was adapted to the Canadian population by including questions regarding smoking history, ethnic origins of parents, and history of gestational diabetes for women and history of diabetes in the family [13]. The CANRISK has been shown to be a quick, effective and sensitive tool useful in the prediction of diabetes. The CANRISK was adapted from the FINRISK to account for the variability of the Canadian population. The CANRISK underwent testing to validate its results against fasting plasma glucose (FPG) testing. While validating the CANRISK, 6223-screened participants also underwent an oral glucose tolerance test in which the area under the curve for both paper-based and electronic versions was 0.75 (95% CI: 0.73-0.78). The CANRISK was demonstrated to be a statistically valid tool for diabetes [13]. Using FPG especially combined with screening tools such as the CANRISK and/or OGTT, were found to be effective in the detection of diabetes [14].

By using available tools to predict patients’ risk for developing diabetes, physicians and other health care practitioners can become more aggressive in promoting healthy life-style interventions that may decrease the risk of diabetes. Patients with impaired glucose tolerance are often at risk of progressing to diabetes [7].

As the population of the Arab countries is unlike that of the populations for which these two tools were developed, it is important to have one of these tools translated into the Arabic language. Utilizing the WHO forwardbackward translation protocol [15], the tool can effectively be utilized by Arab, non-English-speaking health professionals or patients themselves worldwide. Therefore, the aims of the study were to: (i) translate the CANRISK into Arabic language using the WHO forward-backward translation criteria, (ii) examine the new developed tool (ARABRISK) convergent validity against the FPG, and (iii) evaluate the ARABRISK test retest reliability in 2 Arab countries; Jordan and the capital of Saudi Arabia (Riyadh).

The WHO forward/backward translation protocol for the conversion of assessment tools [15] was used to translate the ARABRISK into Arabic from the original English CANRISK. First, the English CANRISK was converted to Arabic by a native Arabic-speaking physical therapist, creating the ARABRISK. Next, the ARABRISK was examined for any awkward wording by a panel of experts and then passed on to a native English speaker for the backward translation portion of the WHO protocol. Once this portion was completed, the backward translated document was forwarded to a board of experts to discover any poorly translated items or expressions and to discuss any modifications to the original tool.

Participants for this study consisted of a multi-center, multi-country sample of convenience from across Jordan (in the cities of Amman, Al-Salt, Ajloun, Madaba, and Aqaba), as well as a sample from the capital of Saudi Arabia (Riyadh). Subjects above the age of 18 but not diagnosed with diabetes were included in this study.

Procedures: Following submission to the ethical committee, permission was obtained to conduct this research and participants gave their consent. All participants were evaluated using the ARABRISK. The ARABRISK was given to each participant twice in the same day in order to examine test-retest reliability. On some subjects, FPG was also tested in order to ensure convergent validity with the ARABRISK. 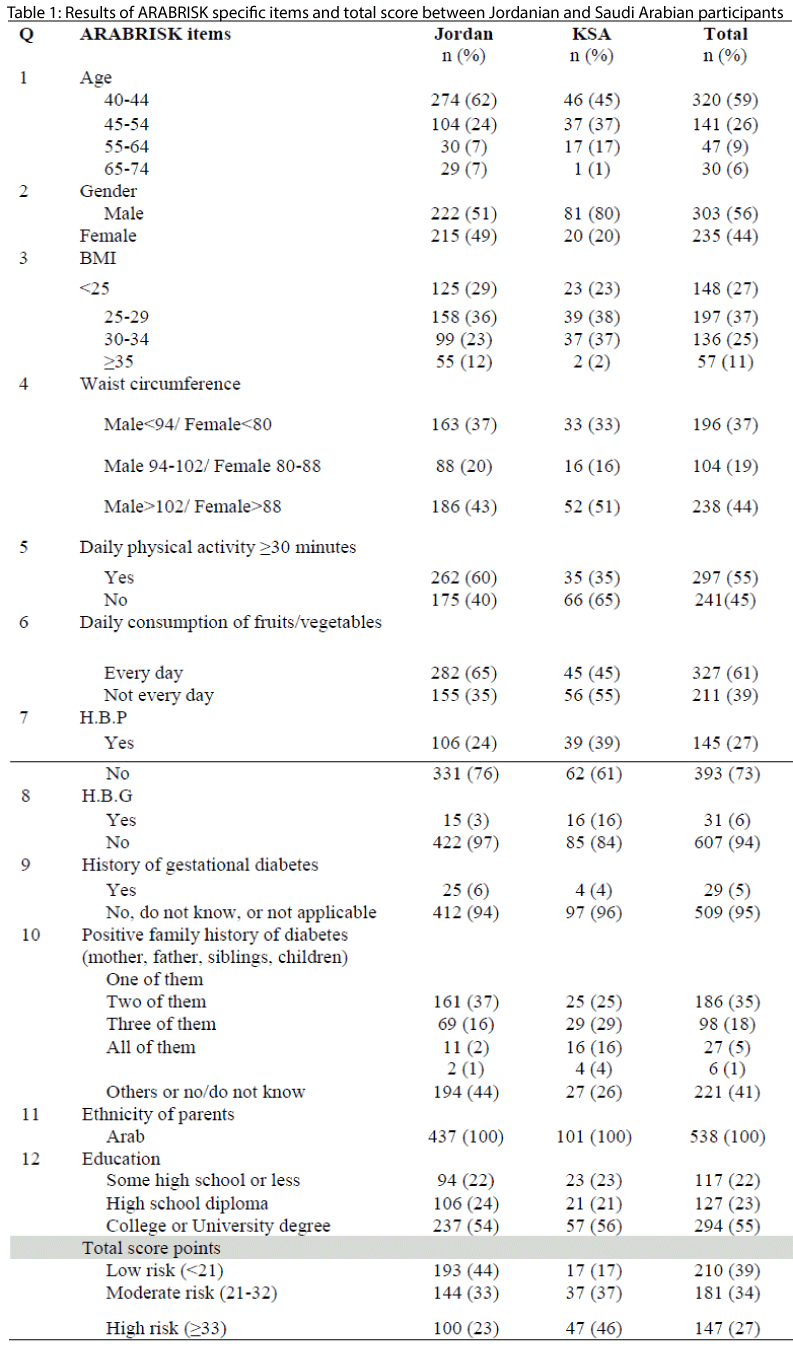 Convergent validity: Of the whole sample, 338 participants had their FPG tested. The range of FPG was 62-405 with a mean of 111 (SD=38). The total score of ARABRISK correlated significantly with FPG (r=0.3, P=.01) meaning that with higher ARABRISK total score the FPG is higher.

The outcomes of the ARABRISK questionnaire were useful in drawing a picture of the risk of diabetes in the residents of Riyadh and different Jordanian cities. This study will enable healthcare professionals to use the ARABRISK with people to predict the risk of diabetes. Specifically, the ARABRISK will facilitate the impact and implementation of any national the “Arabic” prevention program with regard to modifiable risk factors (such as BMI and a sedentary lifestyle) in the Arabic community.

Diabetes can lead to many health complications, including but not limited to cardiovascular disease, renal disease, visual and sensory disturbances and amputations. By detecting diabetes early, abnormal insulin levels can be properly adjusted before they can exert detrimental effects throughout the body.

In a study, Knowler et al. showed that 11% of 3234 nondiabetic participants were diagnosed with diabetes during 2.8 years of the study. Participants were divided into three groups, received metformin, lifestyle modification or a placebo treatment. At the end of the study period, the incidence of diabetes was reduced in both the metformin group and the lifestyle modification group, though the lifestyle change was shown to be significantly more effective [17]. In patients with a high risk of developing type 2 diabetes due to their lifestyles, Tuomilehto et al. conducted a study demonstrating a decrease in incidence of diabetes by 58% over the controls, in a group of subjects enrolled in an intervention of a combination of weight reduction, decreased intake of fat and saturated fat, increased physical activity and increased dietary fiber intake [18].

The aim of ARABRISK was to initiate a simple ARABRISK calculator from the original English CANRISK that could be used in the primary care setting and by individuals themselves. For the purpose of validation, the outcome for the model was based on the collective results of the participants’ blood tests (FPG) as well as the ARABRISK questionnaire. Also found that a significant amount of opportunistic screening effort expended by CANRISK for Canadian adults to support the importance of screening tools, which might allow ARABRISK to follow CANRISK experience in the future.

This study had several strengths. First, we used data from a geographically diverse sample of individuals and rigorous statistical methodologies to identify predictor variables, and to assess their diabetes risk. We believe that our research outcomes minimize the likelihood that our translation and validation model structure are anomalous findings. Secondly, the model results provide a benchmark for future iterations of the model. Finally, the high agreement (ICC) may enable us to identify further accurate results among different Arabic countries and may facilitate its use in the future.

This study has limitations that we plan to address in future work. Measurement of blood glucose was performed with a glucometer intended for individuals’ selfmonitoring. Our overarching goal was to translate and validate a model that could be used by individuals with diabetes, who rely on self-monitored glucometer values to evaluate changes in glucose levels in their daily lives. All in all, our methods were appropriate, however, it would be preferable to assess model accuracy using a more stringent reference standard, such as HbA1C.

This study has demonstrated that ARABRISK is a statistically valid tool that may prove to be suitable for assessing diabetes risk in Arabic population. We translated and validated a model to predict diabetes risk. We are encouraged by these preliminary results to enable further research, for instance a model based on this work might be useful in clinical practice and in individuals’ selfmanagement toward diabetes prevention.