Background: Pain modulation is very important after operation, particularly for women who undergo caesarean section. Physiologic and psychological problems are the consequences of the improper pain management which raise the healthcare costs and prolong the recovery process.

Objectives: The aim of the present work is to assess the analgesic effect of combination of intrathecal midazolam or magnesium sulfate with bupivacaine in comparison to bupivacaine alone in parturient women who are candidate for non-emergent caesarean section.

Methods: Current study is a randomized controlled trial. 93 parturient women who were candidate for non-emergent caesarean section were selected. All individuals signed a written consent. By random block allocation they were divided to 3 groups. 10 mg bupivacaine 0.5% along with 2 mg midazolam intrathecally was administered for one group. An intrathecal injection of 10 mg bupivacaine 0.5% in addition to 100 mg magnesium sulfate was administered for second group. And finally the control group received an intrathecal injection of 10 mg bupivacaine 0.5% with 1 ml normal saline. The postoperative analgesic period, mean arterial pressure, heart rate, and frequency of nausea and vomiting were evaluated in 3 groups.

Results: The mean time from the anesthesia to start of pain sensation and demand for the first dose of analgesic was longer in midazolam and magnesium sulfate groups in comparison to the control group, although it wasn’t statistically significant. Furthermore, there was no significant difference between the pain-free parturient rates also the pain severity was not significantly different between the three groups 4 h after caesarean section. Hemodynamic changes such as mean arterial pressure and heart rate, the postoperative nausea and vomiting rate and the mean first and fifth minutes Apgar score did not differ in 3 groups.

Conclusion: The present work showed no benefit for intrathecal midazolam or magnesium sulfate combined with bupivacaine in women who undergo caesarean section.

Pain modulation is very important after operation, particularly for women who undergo caesarean section. Physiologic and psychological problems are the consequences of the improper pain management which raise the healthcare costs and prolong the recovery process. Bupivacaine is the main agent used for spinal anesthesia in caesarean section. However, many researchers studied different classes of drugs as an adjuvant agent to reduce the side effects of bupivacaine and prolongation of analgesic period [1-4].

The opioid drugs are believed to have good analgesic effect when used as an adjuvant to intrathecal bupivacaine. Although, their important side effects such as pruritus, respiratory depression, urinary retention, nausea and vomiting have limited their use in practice [5-7]. Therefore, introducing nonopioid adjuvants for prolongation of the analgesic period is of particular interest in the field of anesthesiology.

Midazolam, a short-acting benzodiazepine, and magnesium sulfate, a non-competitive N-Methyl-D-Aspartate (NMDA) receptor antagonist, have been emerged as useful alternative agents for opioids in a number of studies [8-10]. Since a few number of studies have evaluated the analgesic effect of these agents in human [8-10]. The current study aimed to compare the analgesic effect of intrathecal midazolam or magnesium sulfate in combination with bupivacaine versus bupivacaine alone in parturient women undergoing non-emergent caesarean section.

Present work was a randomized controlled trial. The protocol of the study was approved by the ethical committee of Fasa University of Medical Sciences and was registered in the Iranian registry of clinical trials database (study code: IRCT2014102719145N2). 93 parturient women who were candidate for non-emergent caesarean section were selected. All individuals signed a written consent. The inclusion criteria were full-term pregnancy, non-emergent caesarean section (elective caesarean, previous caesarean, cephalopelvic disproportion, malpresentation) and the American Society of Anesthesiologists (ASA) physical status I or II. The exclusion criteria were contraindication for intrathecal injection, known allergy to midazolam or other benzodiazepines or systemic diseases (such as diabetes, hypertension and preeclampsia).

Before induction of spinal block, 15 mg/kg normal saline was infused for each parturient woman. After that, participants were placed in the sitting position and intrathecal injection was performed using an aseptic 23-gauge needle in the L3-L4 or L4-L5 intervertebral space. Parturients were turned into supine position right after intrathecal injection.

Postoperative analgesic period was defined as the time from the end of spinal block to the first request for analgesic agent by the parturient. The severity of pain was also investigated using 11-point Numerical Rating Scale (NRS-11) every 30 minutes for the next 4 h. Hemodynamic changes (mean arterial pressure and heart rate), frequency of nausea and vomiting were also compared between the study groups. A comparison of the first and fifth minutes Apgar score was made among the delivered infants of parturients in each group.

All statistical analyses were performed using SPSS version 15 (SPSS Inc., Chicago, IL, USA). The quantitative data were presented as mean ± SD (median for non-parametric data). Baseline characteristics of participants in the study groups were compared using independent t-test (Mann-Whitney U test for non-parametric data). Chi-square test was used to compare the rate of pain-free parturient and postoperative nausea and vomiting between the study groups. Hemodynamic changes and the severity of pain were compared between the study groups using independent t-test or Mann-Whitney U test. Pvalue less than 0.05 was considered as statistically significant.

The mean time from the anesthesia to start of pain sensation and demand for the first dose of analgesic was longer in midazolam and magnesium sulfate groups in comparison to the control group, although it wasn’t statistically significant (144.03 ± 69.251, 132.10 ± 56.166 and 126.23 ± 50.10 minutes, respectively, P=0.737). Moreover, the rate of painfree parturients (P>0.05) and the severity of pain (P>0.05) were not significantly different between the three groups within four hours after caesarean section (Figures 1-3). 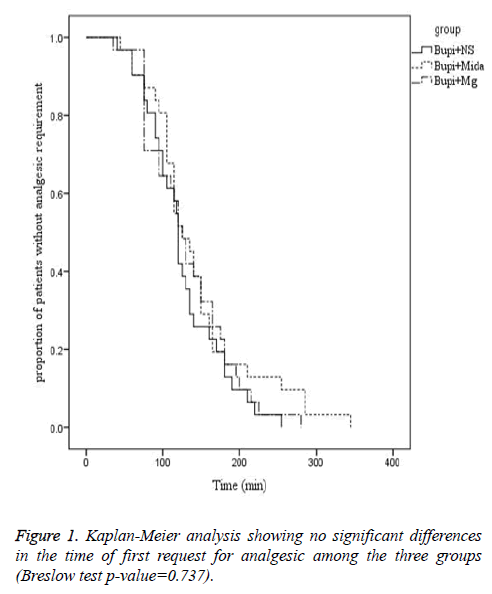 Figure 1: Kaplan-Meier analysis showing no significant differences in the time of first request for analgesic among the three groups (Breslow test p-value=0.737). 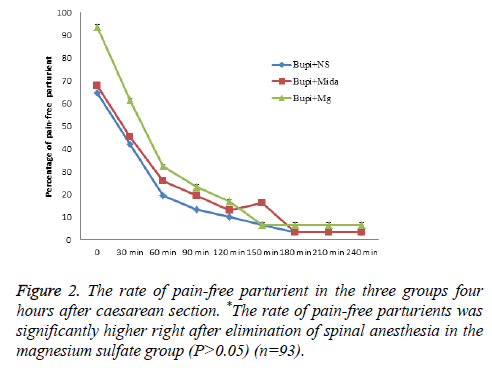 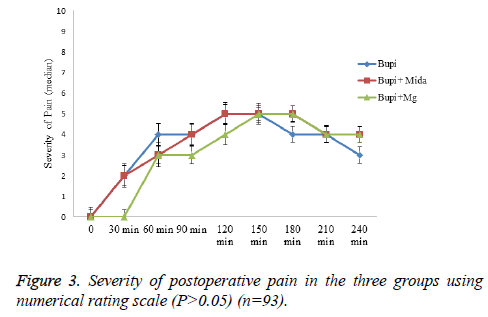 Hemodynamic variations such as mean arterial pressure and heart rate and frequency of postoperative nausea and vomiting were similar between the study groups (P>0.05) (Figures 4-6). 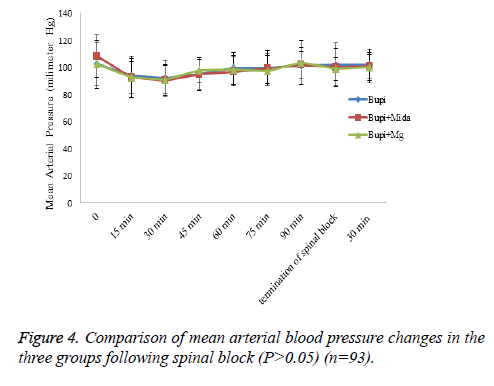 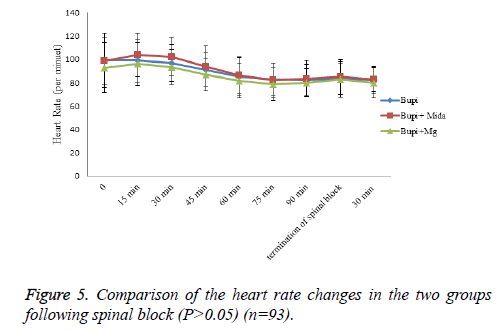 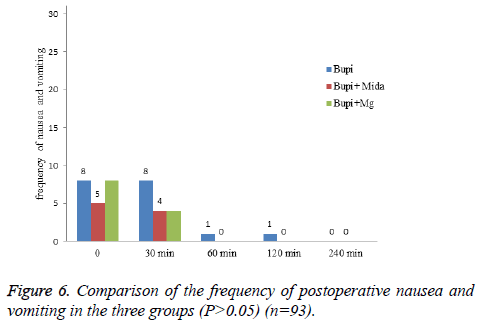 Figure 6: Comparison of the frequency of postoperative nausea and vomiting in the three groups (P>0.05) (n=93).

There was no significant difference regarding the mean first (0.439) and fifth (0.757) minuets Apgar score between the study groups (Table 1).

In the current study, addition of intrathecal magnesium sulfate to bupivacaine showed significant relief of pain immediately after termination of spinal anesthesia. However, after 30 minutes there were no significant differences in the analgesic period and severity of pain in women received either adjuvant midazolam or magnesium sulfate or bupivacaine alone. Frequency of postoperative nausea and vomiting, hemodynamic changes and the first and fifth Apgar scores were also similar between the study groups.

The analgesic effect of intrathecal midazolam in women undergoing caesarean section has been investigated in only one randomized clinical trial previously. Karbasfrushan et al. [14] in a similar study reported that adding 2 mg/ml of midazolam to bupivacaine is associated with a significant relief of pain at 15 and 120 minutes after caesarean section. Of note, frequency of postoperative nausea and vomiting was higher than the control group in this study.

Two mechanisms have been suggested for analgesic effect of intrathecal midazolam; release of endogenous opioid acting at spinal delta receptors and reduction of excitatory GABAmediated neurotransmission [15,16]. The analgesic effect of adjunctive therapy with intrathecal midazolam has been investigated in patients undergoing different surgical procedures. Talebi et al. [17] showed that injection of 1 mg midazolam in combination with lidocaine is effective and safe for controlling postoperative pain in inguinal herniorrhaphy. Intrathecal midazolam in combination with sufentanil was also reported to be effective for enhancing analgesia in labor pain [18]. The analgesic effect of Midazolam as an adjunctive to bupivacaine has been investigated in two studies. In the Chattopadhyay’s study, it was shown that adjunctive therapy with midazolam significantly increased the duration of analgesia and decreased the incidence of postoperative nausea and vomiting in patients undergoing infraumbilical surgery [19]. Shadangi et al. reported similar findings without excessive rate of adverse effects [20].

Although adding intrathecal midazolam to a local anesthetic showed longer analgesia in previous studies, our study failed to illustrate any benefit from intrathecal midazolam combined with bupivacaine in women undergoing caesarean section. The differences in pain threshold and dose of drug can be a potential reason for our findings.

The Apgar score of new-borns was also similar between the three groups in our study, which indicates safety of intrathecal administration of midazolam and magnesium sulfate for newborns.

Our study had certain limitations including inability to test different doses of intrathecal midazolam and magnesium sulfate on duration of analgesia and postoperative complications and not including the number of gravidities of parturient women. Further studies with considering these points are needed to determine the effect of intrathecal midazolam and magnesium sulfate in women undergoing caesarean section.

The present work showed no benefit for intrathecal midazolam or magnesium sulfate combined with bupivacaine in women who undergo caesarean section.