2Centre for Foundation Studies in Science, and University of Malaya, 50603 Kuala Lumpur, Malaysia

Forty-four Sprague-Dawley rats were divided into honey (1.0ml/100g honey), honey control (1.0ml/100g 0.9% NaCl), nicotine (0.5mg/100g nicotine), nicotine control (0.1ml/100g 0.9% NaCl) and nicotine-honey (0.5mg/100g nicotine and 1.0ml/100g honey) groups and treated for 60 days. On day 61, the rats were sacrificed and blood was drawn for blood hormone analysis. The testes were fixed in Bouin’s solution followed by Hematoxylin and Eosin (H&E) staining technique. This treatment did not significantly affect the testosterone level for all five groups (p≥0.05). The N (263.79±2.17μm) group showed significantly lower diameter of seminiferous tubules compared to the other four groups. The NH (135.02±1.66μm) and HC (130.61±2.05μm) groups were observed to have significantly higher diameter of lumen. The H (34.96±0.40μm) group showed significantly larger width of spermatocytes compared to the N and NH groups (p<0.05). Densely packed and abundant spermatogenic cells were observed in the H, HC, NC and NH treated rats. Degeneration of spermatogenic cells, lower numbers of Leydig and Sertoli cells were observed in the N group. ThSese findings imply that Tualang honey can significantly improve the spermatogenesis process in rats and suggest its potential healing properties to reduce the effects of nicotine in humans.

Smoking has been shown to be associated with deleterious effects on different parts of the body and reproductive systems of animals and humans [1]. A number of studies have reported that nicotine has a detrimental effect on histological structures of testis [2,3]. Some substances found in cigarette smoke including nicotine and its metabolite cotinine, have been found in seminal plasma.

Nicotine, an addictive component in cigarette and tobacco products, can cause many detrimental effects including on the reproductive system. Cigarette smoke has been observed to significantly increase the level of reactive oxygen species (ROS) in seminal vesicles, a factor which is responsible for oxidative stress [4]. Overproduction of ROS may induce sperm cell injury through several pathways, and can significantly impact both sperm quality and function [5,6].

Hasan et al. [7] carried out an investigation using rats that were exposed to cigarette smoke for 10 weeks to evaluate the process of spermatogenesis. Spermatogenesis in male rats from the treated group was mildly reduced compared to male rats in the control group. The diameter of seminiferous tubules was significantly lower for the treated group compared to the control group. Nicotine also decreased the surface epithelium cell height of epididymis and seminiferous tubules [8]. Another finding also showed that nicotine exposure caused seminiferous tubular derangement, sloughing of germ cells from the germinal epithelium and disintegration of spermatocytes and spermatids. These would result in disruption of spermatogenesis [3].

A previous study had also found disappearance of spermatids, spermatocytes and Leydig cells in the nicotinetreated rats [2]. Lumen of seminiferous tubules of the nicotine-treated rat testis showed accumulation of degenerating germ cells compared to the control testis that contained a large number of spermatids and spermatozoa. Previous research had also reported that nicotine decreased the level of testosterone [9,10].

Honey has been demonstrated to have significant antioxidant effects [11]. Antioxidants are compounds that dis pose, scavenge, and suppress the formation of ROS, or oppose their actions. Previous studies had demonstrated that supplementation of honey could provide significantly positive effects on spermatogenesis [12,13]. Mahaneem et al. [14] had also reported that administration of appropriate doses of honey had enhanced the third stage of spermatogenesis in rats. Previous research had indicated that honey supplement improved the activity of testicular marker enzyme for spermatogenesis in rats [12]. Sibel et al. [15] had found that testosterone level was increased in the royal jelly-treated group compared with the cisplatintreated and royal jelly cisplatin-treated groups.

Currently, data concerning the effect of honey on histological features of seminiferous tubules and testosterone levels are still lacking and requires further studies. Therefore, the present study was designed to provide additional data concerning the effects of nicotine and Tualang honey on testis histological characteristics and testosterone levels in rats. Besides, this study was also conducted to provide preliminary data on the protective and beneficial effects of honey on seminiferous tubules of nicotine-treated male rats.

Rearing and maintenance of rats

Forty-four male Sprague-Dawley rats aged 6 – 8 weeks and weighing between 130-250g were acquired from the Laboratory Animal Center, University of Malaya. Rats were allowed to acclimatize to the animal house conditions for 1 week prior to treatment with 12 hours light and 12 hours of darkness per day. The rats were housed individually in polypropylene cages with steel wire tops and the base filled with a layer of sawdust to absorb urine. All rats were provided with sufficient pellet (20-30g) and water ad libitum daily.

Tualang honey was obtained from AgroMas® produced by Federal Agricultural Marketing Authority (FAMA), Malaysia. Nicotine (L-Nicotine, 99+%, CAS RN: 54-11- 5) was purchased from Acros Organics. Each group was treated daily for 60 consecutive days and sacrificed on day 61. Blood was drawn for hormone analysis while the testis was abstracted for testis histological study. The experimental procedures were performed in accordance with the Guideline for Animal Experiment of the Medical Centre Research Committee, University of Malaya [PASUM/16/11/2010/NHH(R)].

The collected blood was centrifuged at 25°C for 10 minutes with 4000 rpm to obtain the serum. The serum samples were then kept in deep freezer (-18°C). The blood testosterone level was analyzed by using radioimmunoassay (RIA) (TESTO-CTK, DiaSorin, P3093) kit. Radioactivity level was measured by using a gamma counter (Wallac Wizard 1470 automatic gamma counter).

The testes were abstracted and fixed in Bouin’s solution prior to histological processes. The tissue was dehydrated in a graded alcohol series and embedded in paraffin wax. Tissues were sectioned at 8 μm, stained with Hematoxylin and Eosin (H&E) and mounted with Canada balsam (MERCK, 1.01691.002). Features of seminiferous tubule measured including diameter of seminiferous tubules and lumen and width of spermatogonia, spermatocyte and spermatid-spermatozoa layers. For each rat, 15 seminiferous tubules were evaluated under the light microscope (Olympus BX51 Compound Microscope) with 20x magnification and visualized using Life Science Soft Imaging System Software.

Statistical analyses of the data were performed on a microcomputer using Statistical Package for Social Science (SPSS) 20.0 programme. The data were analyzed using the analysis of variance (ANOVA) procedure and significant differences in the treatment levels (p<0.05) were tested using the Least Significant Difference (LSD) multiple comparison technique.

The analysis of variance for blood hormone indicated that treatment did not have a significant effect (p≥0.05) on testosterone level (Table 1).

Table 1: Mean squares from the analysis of variance for testosterone level of rats administered with Tualang honey and nicotine.

The analyses of variance for testis histological features indicated that the effects of treatment had highly significant (p<0.01) effects on diameter of seminiferous tubules,diameter of lumen, width of spermatogonia layer and width of spermatocyte layer but did not significantly (p≥0.05) affect the width of the spermatid-spermatozoa layer (Table 2).

Table 2: Mean squares from the analysis of variance for testosterone level of rats administered with Tualang honey and nicotine. 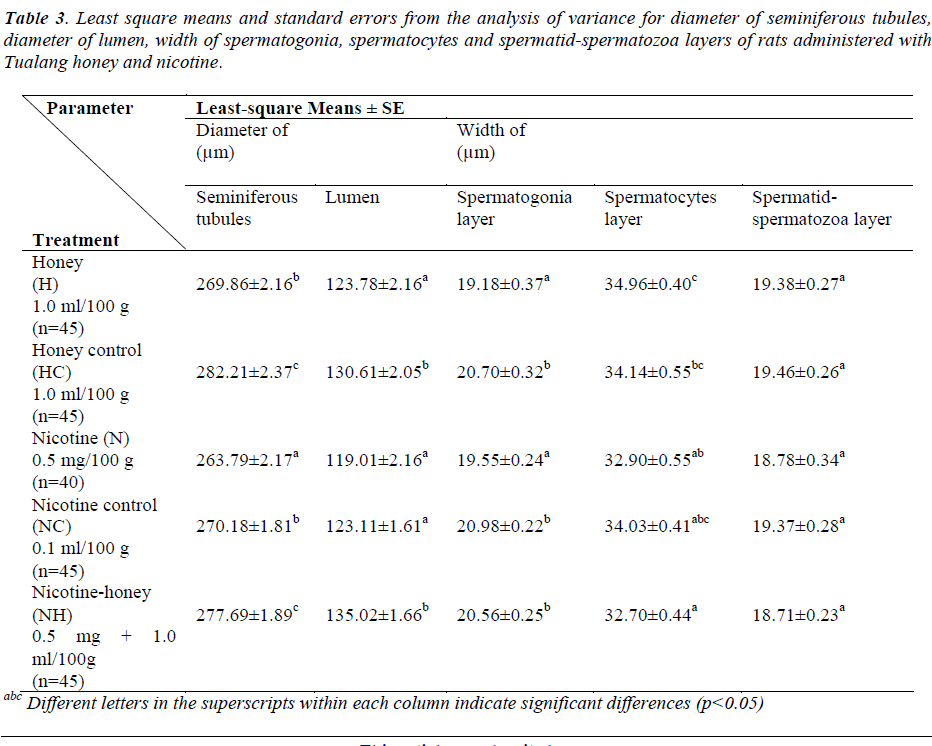 Table 3: Least square means and standard errors from the analysis of variance for diameter of seminiferous tubules,diameter of lumen, width of spermatogonia, spermatocytes and spermatid-spermatozoa layers of rats administered with Tualang honey and nicotine.. 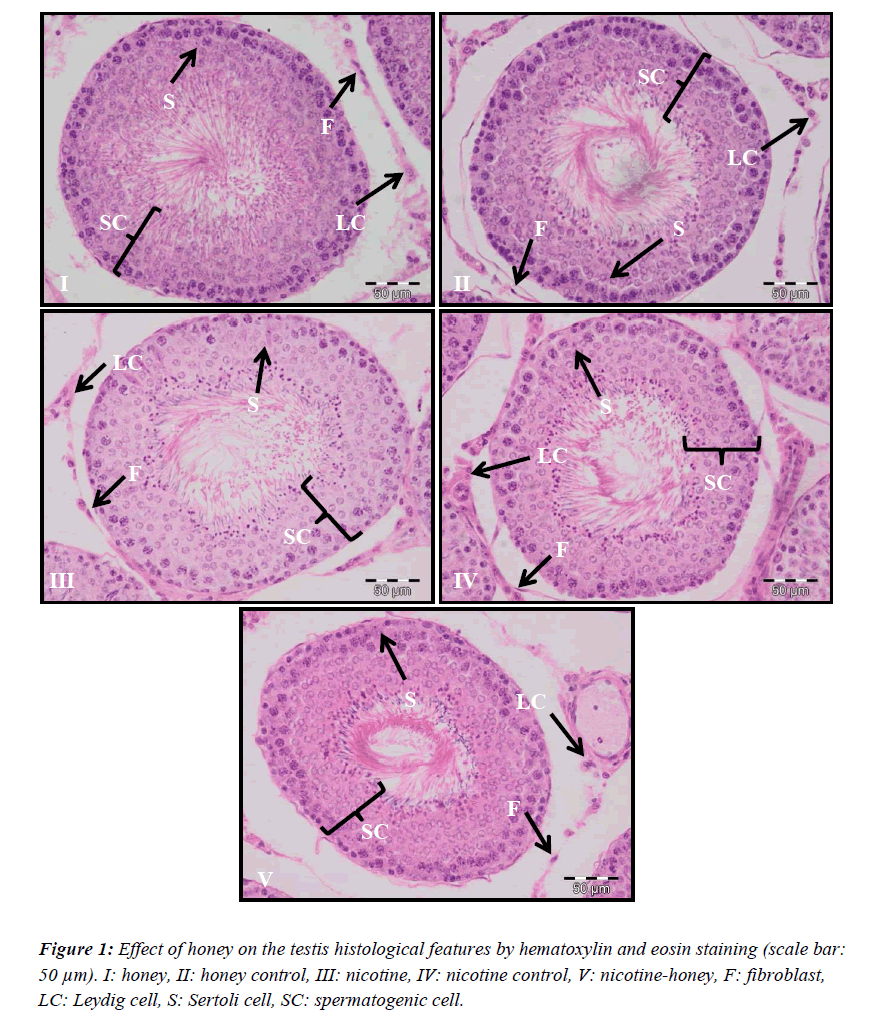 The present results showed no significant difference in testosterone level in all groups. Vine [16] reported that testosterone levels might be unchanged, elevated, or decreased in smokers. However, Yardimci et al. [17] reported a decreased level of testosterone in rats that were exposed to cigarette smoke. A possible explanation is that smoking causes degeneration of Leydig cells and over time may reduce testosterone production.

Another finding reported that serum testosterone levels were significantly increased in a group of smokers [18]. This was due to the increase of luteinizing hormone (LH) level in the smokers’ group which stimulated the central activation of Leydig cells, thus explaining the elevation of testosterone level.

Results of the present study showed that, nicotine administration had negatively affected several parameters of testis histological structure. Similarly, previous studies also shown that rats with nicotine exposure caused disintegration of spermatocytes and spermatids resulting in disruption of spermatogenesis [3]. In addition, Rajpurkar et al. [19] claimed that smoking reduced the number of germ cells, decreased the height of germinal epithelium, the diameter of tubules and induced apoptosis in genital cells of the testis. These changes occurred due to the presence of many toxic substances in cigarettes that affected all tissues including the testis [7].

The present findings also showed that the N treated rats had reduced seminiferous tubule diameter compared to the other four groups. Previous study had also shown at seminiferous tubule diameter in the cigarette smoke rats were significantly reduced as compared to the honey group [20]. Mahanem et al. [2] observed a significant decrease in histopathology of testis in the nicotine-treated rats that might be due to increase in oxidative degradation of phospholipids.

The detrimental effects of nicotine exposure on seminiferous tubules might be due to the overproduction of reactive oxygen species (ROS) that leads to excessive lipid peroxidation. This process might eventually result in structural damage and dysfunction of the cell [21]. As a result of excessive ROS, mutations in mitochondrial genome might occur and could disturb the formation of morphologically and functionally mature spermatozoa thus leading to male infertility [22]. Previous authors had have reported that exposure of rodents to cigarette smoke would led to degeneration and reduction in number of Leydig cells [17,20].

Mahanem et al. [2] reported that histological sections of testis from the nicotine group revealed vacuolation of tubules and sloughing of immature germ cells into the lumen. In addition, the Sertoli and germ cells were shrunken within the tubules, thus greatly suppressing spermatogenesis [23]. Previous studies reported that Sertoli cells play a major role in the regulation of spermatogenesis and altering the rate of sperm production [24]. Further studies are required to establish the exact mechanism leading to the changes in the germ cells. The significance of Sertoli cells must be taken into consideration because of their functional relationship with Leydig cells and germ cells in regulating the spermatogenesis process.

In the present study, several testis histological features were positively affected by the H and NH groups as compared to the N group. Honey contains phenolics, which have antioxidant activity. This antioxidant property protects cells from being damaged by scavenging the free radicals. The present study also showed that seminiferous tubules from the H and NH groups had have significantly more spermatogenic cells compared to the N honey which indicated that the spermatogenesis process was positively facilitated by consumption of honey. The present results also supported the finding by Syazana et al. [13] that spermatogenic cells in the honey-treated group were more densely packed compared to the control group. Mohamed et al. [25] also observed that honey supplementation improved spermatogenesis in normal rats. Due to its antioxidant properties, it has been proved that honey is able to reduce testicular damage. This would suggest that honey has the potential healing properties against the toxic effects of nicotine.

The present study supported supports the contention that Tualang honey can improve significantly spermatogenesis in rats. The results also suggest the healing potential of Tualang honey against the toxic effects of nicotine-treated male rats. However, further studies are required for a better understanding of the interaction between honey and nicotine involving the Sertoli and Leydig cells to establish the exact mechanism leading to the changes of spermatogenesis.

This study was financially supported by grants from the Fundamental Research Grant Scheme (FRGS), FP008/- 2009, and the Institute of Research Management and Consultancy (IPPP), PV005-2012A.