Testing the Sensitivity and Specificity of right hand and foot pulse oximetry for the detection of congenital heart defects in Saudi Arabia.

Background: Congenital Heart Defects (CHDs) are considered to be major health issues, as onefourth of affected infants develop critical illnesses that require urgent interventions. The early detection and treatment of CHDs are important for the prevention of serious complications that can be difficult to manage before the spontaneous closure of the ductus arteriosus, which maintains circulation of oxygenated blood. Pulse Oximetry (POX), which involves the use of a monitoring device to measure transcutaneous oxygen saturation, can be used as an inexpensive screening tool for CHDs. the present study aimed to evaluate the sensitivity and specificity of POX in the screening of CHDs among neonates in our institution. Methods: The study included all newborn neonates at King Abdulaziz University Hospital, Jeddah, Saudi Arabia, between December 2015 and December 2016. Oxygen saturation was measured at 24 h after birth and before discharge. Negative screening: oxygen saturation (SaO2) was ≥ 95% in the right hand and foot, with a difference in ≤ 3%. Positive screening: if the SaO2 was ≤ 90% in the right hand, or was ≤ 90% in the right foot, SaO2 was between 90% and 95% after three readings separated by an interval of 1 h in the right hand or foot, or the difference in SaO2 between the right hand and right foot was>3% after three readings separated by an interval of 1 h. Results: The 3326 neonates were included in this study. The calculated sensitivity was 70%, and the calculated specificity was 99.8%. There was a significant relationship between the number of positive cases and the number of confirmed cases by echocardiography (p=0.01). Conclusion: there was a simultaneous assessment of POX in the right foot and right hand at 24 h after birth and before discharge. POX is a sensitive and specific screening approach for the early detection of CHDs in neonates.

Congenital Heart Defects (CHDs) are birth defects of the structural aspects of the heart and intrathoracic great vessels in newborns, and they prevent the heart from performing its normal functions [1]. CHDs are considered to be major health issues, as they represent the most common form of congenital diseases reaching an incidence of eight to ten per thousand (0.8%–1%) of live-born, full-term births, and eighty-three per thousand (8.3%) for preterm infants [2]. Furthermore, they are considered as some of the leading causes of infant mortality in the US and in other devolving countries [3,4]. In Saudi Arabia with a prevalence reaching up to 10 per 1000 CHDs represent a great health burden [5].

The importance of the early detection of life threatening CHDs has been established and approved by many studies, as any slight delay in the diagnosis might lead to serious complications including death [6,7]. It was found that approximately 30% of death in patients suffering from CHDs is a result of the late diagnosis of these diseases [8]. Up until now early detection of CHDs before the spontaneous closure of the ductus arteriosus, which maintains circulation of oxygenated blood still represents a challenge [9].

Echocardiography plays a significant role in the early detection of CHDs. However, echocardiography can be very expensive for parents of patients. Additionally, it is not available in all health centers, and it requires medical expertise. Pulse Oximetry (POX), which involves the use of a monitoring device to measure transcutaneous oxygen saturation. meeting the criteria for population screening test POX was proven to play a significant role in the early detection of CHDs. POX be used as an inexpensive screening tool for CHDs. Previously, the American Heart Association and American Academy of Pediatrics stated that POX can be used for the early detection of CHDs at 24 h after birth and before discharge [10]. Furthermore, the American Academy of Pediatrics recently published an evidence-based guideline for the use of POX as a screening tool for critical CHDs [11]. First SIBEN clinical consensus is a review that was done in 2016 where they used a specific criteria for POX screening, readings were taken from the right hand which represented the oxygen saturation in the blood before passing through ductus arteriosus (pre-ductal) and from the right foot which represent the oxygen saturation in the blood after passing through ductus arteriosus (post-ductal), between 12–48 h of life, the study concluded that this specific criteria of screening can be of great clinical utility to detect potentially serious diseases in asymptomatic and apparently healthy newborn infant [12]. However, POX still is not used universally as a screening tool for CHDs, up until now POX screening is not been done routinely in Saudi Arabia even with the increasing numbers of CHDs [5]. And still there are so many different criteria’s for screening using POX and none were chosen to be the most accurate [10-12]. Therefore, the present study aims to evaluate the sensitivity and specificity of POX using a specific criteria of the First SIBEN clinical consensus for the screening of CHDs locally among neonates in king Abdul-Aziz university hospital.

This study followed the ethical standards of the Helsinki Declaration. The ethics committee of King Abdulaziz University provided approval. Informed written consent was obtained from the parents of each participant. The study included all newborn neonates at King Abdulaziz University Hospital, Jeddah, Saudi Arabia, between December 2015 and December 2016. The study prospectively reviewed all neonates born at this period. The oxygen saturation values in the right hand and right foot were assessed, and then echocardiography was done to confirm the screening result by detecting the presence of any heart defect, also to identify the type and severity of the heart defect. Neonates who didn’t have files at King Abdulaziz University Hospital and those born with a known congenital disease (e.g. infant respiratory distress syndrome, meconium aspiration …etc.) and other illness that might affect the results of POX were excluded from this study to avoid co-founding factors.

The total number of neonates born at King Abdulaziz University Hospital, Jeddah, Saudi Arabia, between December 2015 and December 2016 was 4000. Oxygen saturation was measured at 24 h after birth and before discharge. Positive and negative data were considered according to information presented in Figure 1. POX sensitivity and specificity were determined. 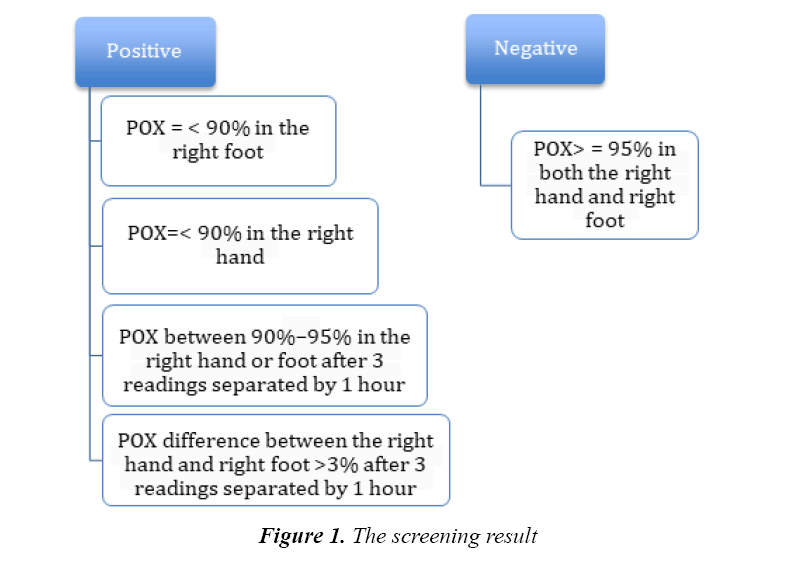 To determine the validity of a screening test for a certain condition, the results of the screening test must be compatible with the results, confirmed by the definitive indicator (gold standard investigation) for the same condition. The Sensitivity, Specificity, and Predictive Value equations are used to calculate such relations, Figure 2 explain the concept of each equation.

Figure 2: Represent basis for determining sensitivity, specificity, and positive and negative values for a screening test

In this current study echocardiography was used as the gold indicator while POX represented the screening test.

Figure 2 Represent basis for determining sensitivity, specificity, and positive and negative values for a screening test.

After the collection of POX reading all candidates included in this study were then screened with echocardiography to rule in or rule out the presence of CHDs.

Table 2: Characteristics and types of CHDs detected by POX screening

Table 3: Characteristics and types of CHDs not detected by POX screening

POX is a noninvasive, safe, convenient, and time saving monitoring approach that can be easily adopted in all healthcare facilities, and it can be used by all healthcare providers without the need for intensive training.

The findings of the present study indicate that POX is a specific and sensitive screening tool to detect newborns with CHD in Saudi Arabia, this correlate with the recommendations of the American Heart Association and American Academy of Pediatrics that POX is a good screening tool [10]. Furthermore, using the same time periods of screening at 24 h after birth and before discharge, we obtained findings similar to those reported by these institutions.

The most surprising finding in this study is that even though most of the literature found that POX can detect severe CHD such as transposition of greet arteries [12,15,16], this study found that POX was sensitive and specific to some minor uncomplicated CHD such as ventricular septal defect, this highlights that POX with the specific criterion mentioned in this study detects the smallest changes in the oxygen saturation that are caused by small defects such as VSD.

Even though this study was held in king Abdul Aziz university hospital which covers two regions of Jeddah city (east and south) this study still is limited by being a single centered study.

Unlike other studies done on this topic all confounding factors that might affect POX reading were excluded from the study, furthermore it is known that sensitivity and specificity studies are hard to conduct as all participants must be screened with the confirmation test, even though a large sample size was obtained in this study.

Although this is a single centered study, this study is well designed and the number of the sample size was adequate for obtaining results similar to the literature. Finally, as there are so many studies to support the role of POX in detecting CHD, this study is an addition the current literature by being the first to be held in this current area with supporting the specific criteria of screening mentioned in the study.

The findings of the current study indicate that simultaneous assessment of POX in the right foot and right hand at 24 h after birth and before discharge is a sensitive and specific screening approach for the early detection of CHDs in neonates in Saudi Arabia. All newborns with other congenital diseases and illness that might affect the results of POX were excluded from this study to avoid confounding factors, thus this study concludes that POX with the specific criterion mentioned in this study detects the smallest changes in the oxygen saturation that are caused by small defects such as VSD. We recommend all Saudi policy makers to consider the addition of POX with the criterion adopted in our study to the screening guidelines for neonates before discharge in all Saudi hospitals. However, this is a single center study we recommend researchers from other centers in Saudi Arabia to hold a similar study with the same criterion mentioned in this study. Also, further research is needed to determine the effectiveness of POX for the detection of each type of CHD.