Testing different concentrations of both hydrocortisone and rifampicin toward pregnane X receptor activation suggest their protective effect against liver toxicity.

In different animal and human (in vitro) models, PXR activation resulted in suppressed liver inflammation and fibrosis which in return suggest graft survival. In this study, different concentrations of hydrocortisone (HC) and rifampicin were tested for PXR activity. For each drug, transfected HEPG2 cells were treated with different molar concentrations and then luciferase activity for both firefly and renilla were recorded. Both hydrocortisone and rifampicin produced an increase in PXR activity. Correlation between PXR activation and graft failure must be addressed in clinical setting

Liver plays vital role in digestion, detoxification, blood clotting, storing of glucose, fat, iron and copper, and metabolism of medications and toxins [1]. Organ transplantation saves untreatable patients from end stage organ dysfunction. As a procedure, liver transplantation comes second after kidney transplantation. The procedure is easily described by replacing a diseased liver with a whole or part of healthy one from brain or heart dead donor (i.e. cadaveric) or using the right lobe from a live donor [2]. The worldwide statistics showed that 20, 200 liver transplants were performed since 2008 [3]. The most recent report published in Saudi Arabia showed that 930 liver transplants were performed since 1990 [4]. In addition to the response of the immune cells toward the new tissues, after liver transplantation ischemia and reperfusion injury are common and may put patients at risk of graft rejection [5]. In order to avoid graft rejection, patients receive number of medications like immunosuppressives. From one medical center to another, different protocols and treatment plans are used to maintain stability and survival after transplant [6].

Within human genome, there are 48 nuclear receptors. Their gene superfamily contains numbers of ligand transcription factors for which they are categorized into two groups (i) classical endocrine hormones, and (ii) orphans. Drug induction of xenobiotics and endobiotics in liver is believed to be mediated through nuclear receptors for several factors (i.e. related to their ligand properties, binding arrangements, tissue expression) where cytochrome P450 system are incorporated. The majority of cytochrome P450 isozymes involved in drug metabolism are found in liver [7-9].

One of the orphan nuclear receptors is the human pregnane X receptor (PXR). They were discovered in 1998 through similarity in structure and later on by genetic cloning in different animals. PXR are expressed in liver and gastrointestinal tract in which they regulate the transcription of genes involved in xenobiotic and endobiotic absorption, distribution, metabolism and excretion (ADME). CYP 3A4, CYP2B, CYP2C, GST, SULT, and UGT isozymes are some of the classical genes induced by PXR. Drugs that express PXR suggest their protective effect against liver toxicity (e.g. Rifampicin) [8,10,11]. In different animal and human (in vitro) models, PXR agonists suppressed liver inflammation and fibrosis. Using a rat model of ischemia reperfusion injury (IRI) has clearly showed that administration of PXR activator reduced IRI, cholestasis and fibrosis [12,13].

Preparation and culture of cells

2. Tap the flask once to detach cells and avoid shaking the flask while waiting.

3. Collect media/cell mixture then centrifuge at 20000 rpm for 5 minutes.

5. Re-suspend cells in 10 ml of media and count the cells using microscope.

6. In 75 cm2 flask, transfer the cells and add the calculated volume of media.

7. Split cells at the end of the week.

8. Cultures should be incubated at 37°C in humidified atmosphere with 5% CO2.

9. Culture medium was then renewed every two to three days.

Lysogny broth (LB): Lysogny broth (LB) is used as a medium for bacterial growth. To prepare LB medium for colonization, in 500 ml bottle, 5 g tryptane, 2.5 g yeast extract, and 5 g NaCl (1.5 g/100 ml to adjust pH at 7). To prepare LB agar plates, add 7.5 g agar (1.5 g for each 100 ml). After autoclaving the mixture, let it cool then aseptically pour into round plates. Plates are now ready for colonization.

8. Select a single colony for miniprep and maxiprep.

1. Pick a colony and inoculate 5 ml LB (+selection) and rotate overnight at 37°C.

2. Leave in fridge and use the remainder for maxiprep to isolate plasmid.

3. Plasmid prep-use required volume of miniprep and isolate plasmid according to kit instructions.

Glycerol stocks: To prepare glycerol stock (for long term storage of plasmids), in each vial add 500 μl LB containing 30% glycerol to 500 μl of overnight culture of a single clone (autoclaved) and then keep it in -80°C freezer.

Purified plasmids are then transfected using effectene® transfection reagent (Qiagen, UK). Transfection is made with a mixture of (ER6)3-pGL3 promoter and RLTK1 with ratio of one to ten respectively. (ER6)3-pGL3 promoter which is a construct encoding luciferase used for quantifying PXR activation [13]. While RLTK1 is a control construct encoding renilla expression not affected by anything except cell viability. Transfected cells are then treated with drug under experiment in different molar concentration. Use dimethyl sulfoxide (DSMO) as a control vehicle. For reporter gene assay follow instruction provided by Dual-Glo Luciferase system (Promega®, UK). Illuminometer or play reader devices are used to assay gene expression by quantifying the electro luminescent backlight produced. Luciferase expression for each treatment is then normalized to renilla expression and compared to those treated with DSMO.

Different concentrations of hydrocortisone (HC) and rifampicin were tested for PXR activity. For each drug, transfected HEPG2 cells were treated with different molar concentrations and then luciferase activity for both firefly and renilla were recorded (Table 1, Figures 1 and 2).

*Mean is the average of all illuminator readings. 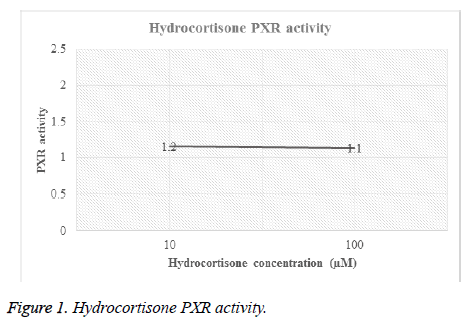 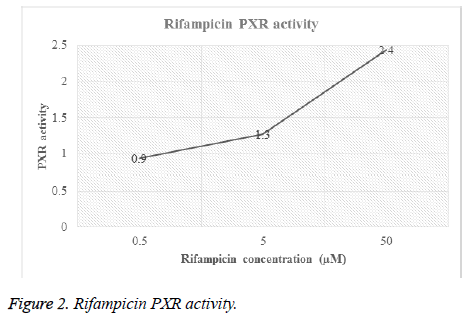 Figures 1 and 2 showed the affinity of both hydrocortisone and rifampicin toward PXR expression. Results from rifampicin experiment support what published in the literature of their suggested protective effect against liver toxicity. Rifampicin produced a concentration-dependent increase in PXR activity. Hydrocortisone experiment needs to be tested with different concentrations to check if there is correlation between PXR expression and different doses but in general, hydrocortisone has a PXR activity.

The author wishes to express her sincere thanks to Professor Matthew Wright from the Institute of Cellular Medicine, Medical School, Newcastle University (Newcastle Upon Tyne, UK) for his kind help in supplying cell line and using liver research laboratory to conduct tests.

Conflict of Interest and Funding

The author declares no conflict of interest or source of funding.